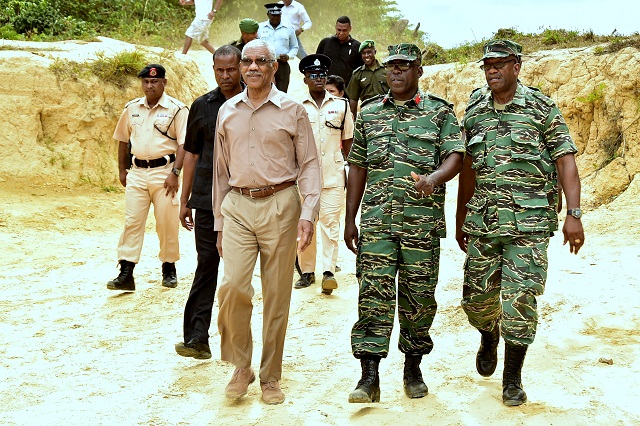 Georgetown, Guyana – (November 5, 2016) President David Granger, today, called on the servicemen of the country, particularly those posted in the Eteringbang and other western Guyana locations to not only be watchful and on their guard, but to also to endeavour, through their actions and encounters, to let the world know that the Guyana/ Venezuela Border controversy was settled 117 years ago and that they are defending sovereign territory.

Speaking at the Guyana Defence Force’s (GDF) annual Christmas lunch at Location Eteringbang the President said that as the persons responsible for the country’ security and territorial integrity, the policemen and soldiers must exercise their duties with passion and love of country. President Granger has been taking Guyana’s fight for a full and final settlement in the Border controversy to every regional and international forum he has been invited to including the United Nations General Assembly, the Commonwealth Heads of Government Meeting and the Caribbean Community Heads of Government Meeting.

“This Cuyuni River is important to us. It is the definition of our sovereignty and your duty as soldiers and policemen is to draw the line so that the world would know where Venezuela stops and where Guyana begins. This has been one of the most painful experiences of our history. Even as we celebrate our 50th anniversary of Independence we have had to put up with 50 years of provocation. Some people don’t understand how we feel about this river and about this territorial controversy. The Venezuelans have been preventing investors from coming here. It has not been easy and I tell my colleagues in the other countries that it is like a bone is stuck in our throat, it is causing us pain, it is preventing us from developing this country to benefit the Guyanese people,” the President said.

The President noted that as far as Guyana is concerned, the matter had been settled 117 years ago with the signing of the Geneva Agreement. He noted too that Venezuela at that time, had been awarded land space, which had originally been demarcated as part of British Guiana, yet it continues to claim even larger territory to this day. 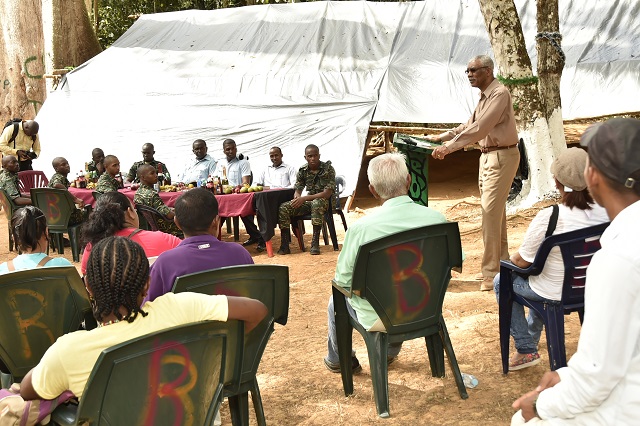 Commander in Chief of the Armed Forces, President David Granger addressing the servicemen and villagers at Location Eteringbang today. He told them that vigilance is the most important element in protecting the country’s territorial integrity.

The Commander in Chief of the Armed Forces said that while Guyana is a peaceful and friendly country and is open to discussions, Venezuela too must understand that it is infringing and laying claims on territory, which in no way belongs to that country.

“We can live in peace. Guyana and Venezuela can live in peace. We live in peace with Brazil and we can live in peace with Venezuela but people across the border must understand that this territory is ours. We cannot stop being vigilant because this land belongs not only to us because we are just the trustees. We have to give [this land to] our children and grandchildren. You [soldiers, policemen and civilians] are the eyes and ears at this western point of Guyana to keep us informed, to let us know if there is any breach of our territorial integrity. All of them must understand and respect our territorial integrity,” he said.

The President expressed gratitude to the servicemen for their commitment and dedication during that past year, noting that Guyana is grateful. 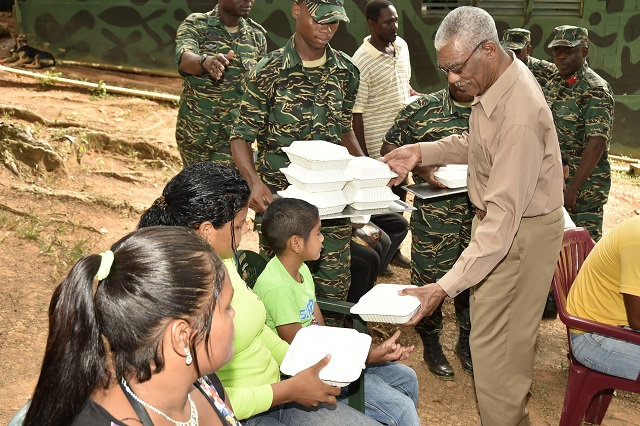 President Granger serving lunch to some of the villagers, who were present at the event today.

“I’ve come to thank you for your service to the nation in 2016 I want to urge you to continue to be vigilant. I recognise the work of the GDF and that is why I had designated November 1 as National Defence Day. Notwithstanding, the moment we drop our guard or our vigilance, the moment we are slack, we are going to face aggression and provocation. This is a permanent duty we have to the people and the country. While I know you won’t be able to be home for the holidays, you can rest assured that the duty you are performing here is vital to our nation. I would remind our nation that their peace, comfort and security were bought at a price by the vigilance of the GDF and the Guyana Police Force,” President Granger said.

After serving lunch to the servicemen and villagers, who were invited to be a part of the festivities on the base, the Head of State visited the Eteringbang Police Station to get a first-hand look at the facilities. He was warmly received by the policemen there, who noted that this is the very first time that a President, sitting or otherwise, has visited that facility.

Diplomatic Corps donates US$1,000 each to ‘Five Bs’ and Shoes that Grow programmes