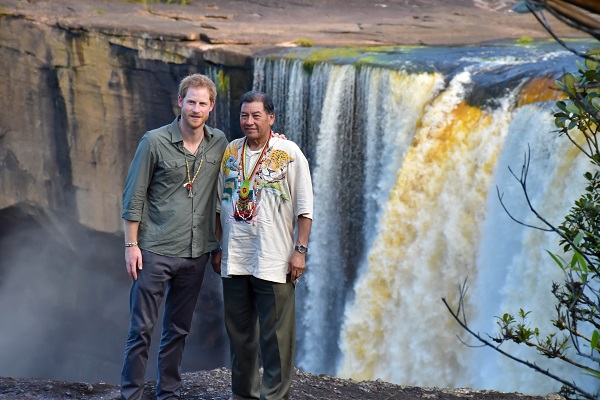 Georgetown, Guyana – (December 3, 2016) President David Granger believes that even as Prince Henry of Wales, popularly known as Prince Harry, enjoys Guyana’s wealth of natural beauty on his visit to Kaieteur National Park, Surama Village and particularly the flag ship of Guyana’s ‘green’ state agenda, the Iwokrama International Centre for Rainforest Conservation and Development, that he is placing the spotlight on the remarkable gift that Guyana has to offer the world. The President believes that his mere presence is a boost for both eco-tourism and conservation efforts locally.

Speaking to a United Kingdom reporter from Mail on Sunday last night, the President Granger reminded that HRH Charles, Prince of Wales remains patron of the Centre, which adds importance to the young Prince’s visit. “His father, Prince Charles, is the patron of Iwokrama Centre and Iwokrama is right at the heart of Guyana. It is over 271,000 square hectares of virgin forests, which Guyana committed to the Commonwealth since 1989 and that Centre is sort of an institute, a laboratory of biodiversity to preserve our unique flora and fauna so Prince Harry coming here is a sort of fulfilment of his own father to Iwokrama. He is still patron and it’s the commitment of Guyana to the Commonwealth. So from the point of view of the environment and the commitment that Guyana has made to becoming a ‘green’ state and to preserving its biodiversity, to conserve its rainforest, we feel that is very important,” the Head of State said.

President Granger said that Guyana is a proud Independent nation that shares strong, friendly bilateral ties with the United Kingdom (UK) and values its place as a member of the Commonwealth, adding that Queen Elizabeth II has visited Guyana twice and all members of the royal family are welcomed here at any time.

“From a political point of view, any time a member of the royal family comes here, we welcome them. We are an English speaking country; we became a British colony in 1814 and Independent in 1966 but our Constitution, our language, our culture is a part of the Caribbean culture and we are very much members of the Commonwealth so his coming here is a sort of revitalisation of that relationship and we welcome him here… Prince Harry is welcome to come to Guyana at any time as any other member of the royal family,” the President said. 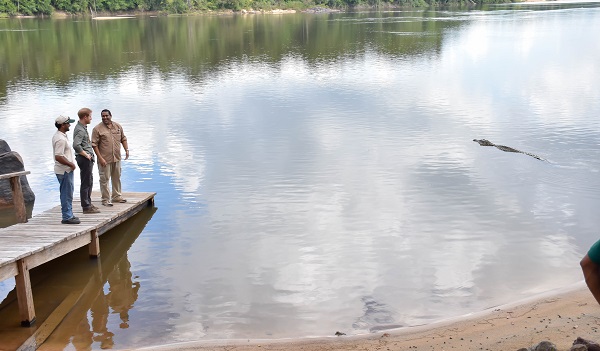 The famous caiman ‘Sankar’ swims up to greet Prince Harry at the Essequibo River in the Iwokrama rainforest.

President Granger described Prince Harry as a ‘young, likeable’ chap, noting that his interest in the improvement of the lives of vulnerable groups is something that should be noted and respected. “My wife, the First Lady is meeting him on Sunday and we are very happy about his choice of projects. It shows you the humane side of the Prince. He is concerned about the human condition and… my own wife, has taken that line to deal with problems affecting vulnerable women and girls and I am very happy that this is what he chose,” the President said.

The Prince is currently on a Royal Tour of the Caribbean on the behalf of Her Majesty, Elizabeth II, Queen of the United Kingdom, Canada, Australia and New Zealand. He arrived in Guyana on Friday and will depart the country tomorrow.

Later in the evening, a reception in his honour was hosted by the British High Commissioner to Guyana, Mr. Greg Quinn, which the President, First Lady, Ministers of the Government, Opposition and National Assembly also attended.