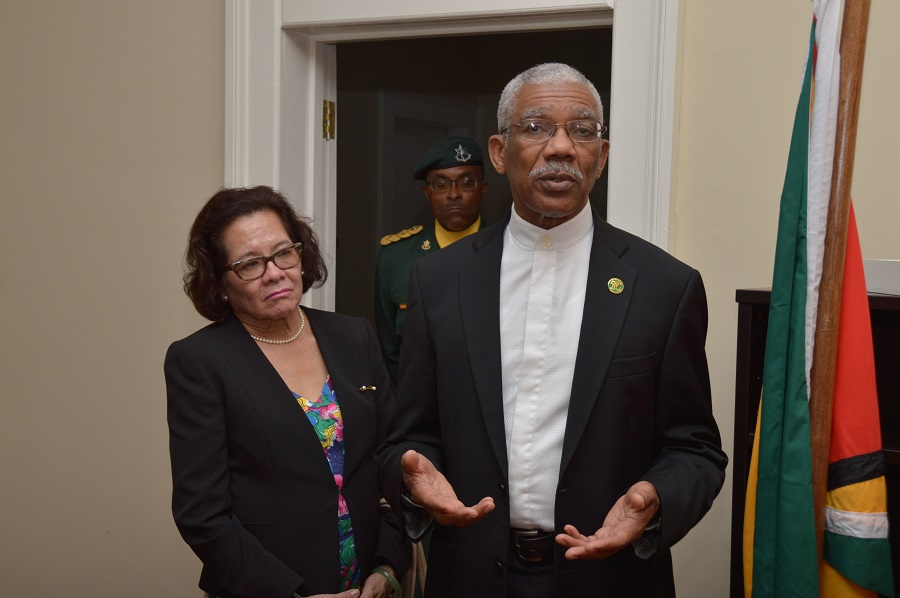 Georgetown, Guyana – (December 1, 2016) President David Granger said that there is an economic purpose to the Caribbean Community (CARICOM) and emphasised the importance of the deepening of regional integration and the advancement of the CARICOM Single Market and Economy (CSME) for the economic well-being of all member states during an informal meeting, earlier today, with the staff at Guyana’s diplomatic mission in Barbados, as he encouraged them to understand their role in maintaining strong relations with their host country.

“If we are divided we will remain poor and we will remain powerless in the international community… We are a very proud people in the Caribbean but we are still a poor people. In Guyana my own mission is to lift people out of poverty and I am sure that in all of the Caribbean countries people are concerned about poverty. How do we do it? By combining our energies,” President Granger, who was accompanied by First Lady, Mrs. Sandra Granger declared.

The Head of State explained that on his assumption of the chairmanship of CARICOM, he plans to work with his counterparts in the region to continue to promote the establishment of the economic basis for Caribbean Single Market and Economy (CSME) and integration. “I have a duty now to continue the process, which was started between [President Forbes] Burnham and [Prime Minister Errol] Barrow in 1965, even before Guyana and Barbados became Independent. When I come here, I come to work I come to fulfill that mission to continue to bring Caribbean countries together. We have to establish the economic basis for the Caribbean Single Market and Economy for Caribbean integration. It’s not just about meeting. It’s not just about talks and conferences,” he said.

Emphasising Guyana’s growth potential, the President Granger said that being the largest CARICOM State, the country can be seen as the hinterland of the Caribbean. He noted that Guyana is open for investment in areas such as agriculture, tourism and in the extractive sectors and called on the mission to foster the type of integration that would make such investments possible.

“Barbados has a strong tourism industry, business infrastructure, and a manufacturing sector that could play a major part in the rebuilding of the Caribbean economy…your work here, is to foster that integration,” the President told the staff at the Consulate.

The President explained that if Guyana can attract more investments like the Santa Fe Farm in the Rupununi, which is owned by a Barbadian, the entire Region stands to benefit.

President Granger thanked the Consul General, Ms. Cita Pilgrim and staff of the mission for their hard work and dedication and urged them to ensure that their work is in line with his vision of bringing the economies of countries of the Region closer together. “The relationship between Guyana and Barbados is important to our Coalition, the Government and to the Caribbean… This mission is a permanent part of Guyana’s national policy to ensure that the Caribbean comes closer together,” President Granger said.

He added that his administration will deepen diaspora engagement in Barbados over time. He noted that he would have preferred to also to have a meeting with Guyanese in Barbados on this trip but that was limited by the severe weather the island experienced during his stay. The President added that while he considered extending his stay in Barbados, he was unable to do so because of Prince Henry of Wales’ arrival in Guyana tomorrow. He committed to returning to Barbados for meetings with the diaspora in the future.

Meanwhile, Consul General, Ms. Pilgrim spoke highly of the staff, many of whom she said, has been with the mission since its inception. She added that they work beyond the call of duty and are deeply committed to furthering Guyana’s cause.

The Head of State and First Lady Mrs. Granger were in Barbados for the past two days to join with Prime Minister Freundel Stuart and the people of Barbados to celebrate their 50th Anniversary of their Independence. They returned to Guyana this afternoon.