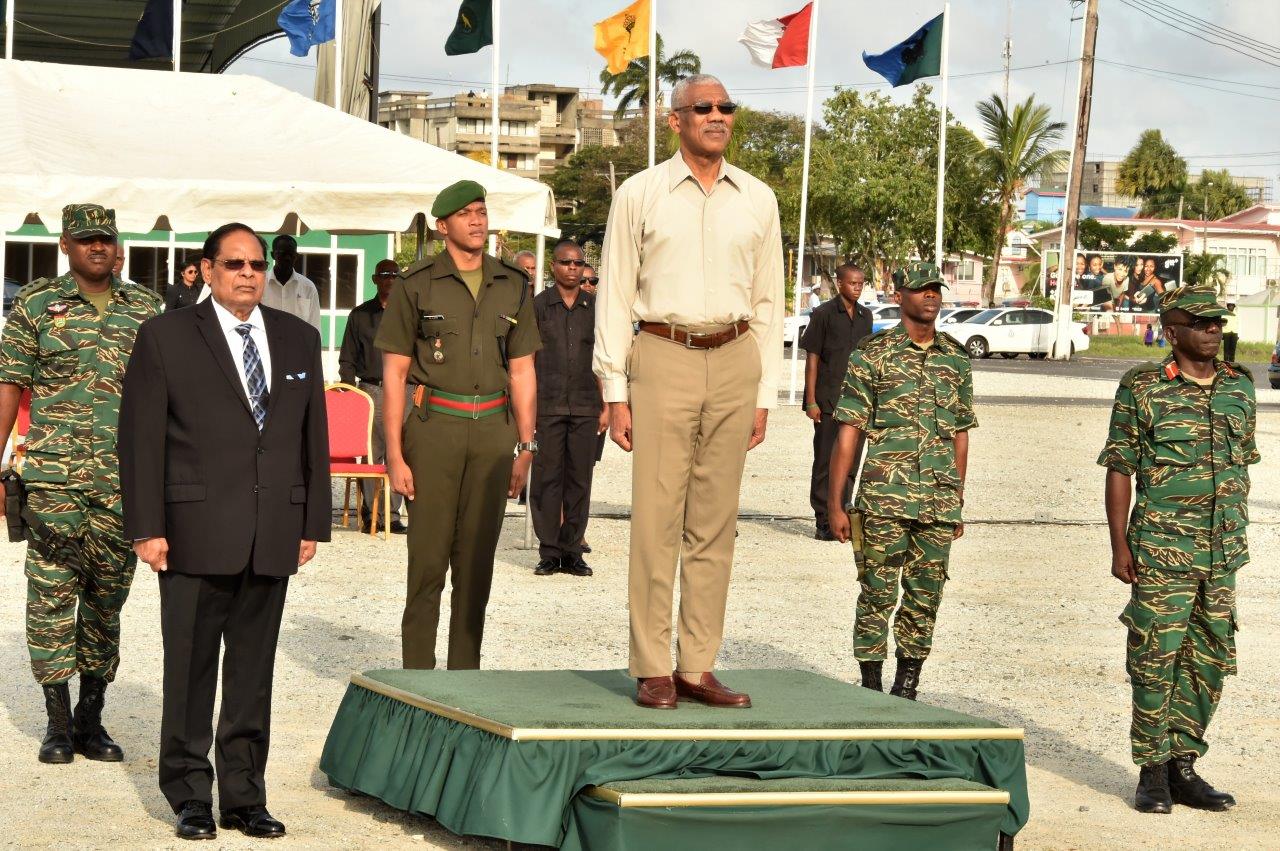 Georgetown, Guyana – (November 26, 2016) President David Granger, today, said that the price we must pay for security and safety is eternal vigilance, and recognised the role that the Guyana Defence Force plays in protecting Guyana’s borders. The President made these comments during his address to GDF officers and soldiers after taking the salute at the army’s Route March to mark its 51st anniversary at D’urban Park.

“Guyana would have been a different place had it not been for the GDF. It is the… that protected the territorial integrity and sovereignty of our nation,” the President said.

Highlighting the role of the Force, he noted that the army has always had two objectives; defence and development. “The Defence Force is deployed to the four corners of the country. You have a responsibility to protect our country by day or by night, in sunshine or rainfall, in the swamp in the jungles in the savannahs on the beaches,” he said. As such, President Granger emphasised the importance of a mentally and physically fit force and exercises such Exercise Greenheart and the Field Tactical Exercise (FTX) ‘HOMEGUARD’.

Noting that Guyana has over 3,000km of borders and 450km of coastline, which fall under the responsibility of army and the coastguard respectively, the Head of State lauded their role in the protection of the country’s patrimony. “We cannot give that responsibility to anyone else, so we have to rely on you and we are proud in our ability to rely on you year in year out to discharge that responsibility… The Defence Force together with our diplomats form the shield that will ensure that the country that we inherited is passed on to posterity. This is your responsibility and today we express our gratitude to you and our encouragement to you to keep on soldiering and to keep on making sure that Guyana is a safe place for prosperity,” he said,

President David Granger was joined by Prime Minister Moses Nagamootoo and the Chief of Staff of the Guyana Defence Force (GDF), Brigadier George Lewis to receive the salute during the army’s 51st Anniversary Route March.

Moreover, the President said that as Guyana prepares to celebrate Christmas, it is the GDF that will be protecting the frontiers of the country even as citizens spend time with their families. “This is your duty, this is why you joined the Defence Force and we are thankful and grateful for the manner in which you perform that duty,” he said.

Chief of Staff of the GDF, Brigadier George Lewis, in his remarks, highlighted that the year 2016 has seen the GDF increasing its operation posture in an aim to achieve its mandate of territorial security. Initiatives with this endeavour include increased border patrols and increased surveillance of Guyana’s Exclusive Economic Zone (EEZ).

This increase, he said, has contributed significantly to the reduction in criminal activity both at sea and on land. He added that the year also saw the GDF training more ranks internally and at local institutions in comparison to previous years. Other endeavours for the improvement of the Force include working to improve the accountability of the GDF, aiming to uphold governmental regulations and continued support of Veterans’ affairs.

“I believe we have in the GDF, officers and ranks, who are committed to the defence of Guyana and to protecting every citizen of this country. We will remain committed to achieving our mission and ensuring that we provide public safety and security to this country,” Brigadier Lewis said.

Today’s event was just one in a month long schedule of activities aimed at celebrating the 51st Anniversary of the GDF. The President was joined by Prime Minister Moses Nagamootoo, Minister of State, Mr. Joseph Harmon, Minister of Foreign Affairs, Mr. Carl Greenidge and Minister of Legal Affairs, Mr. Basil Williams. 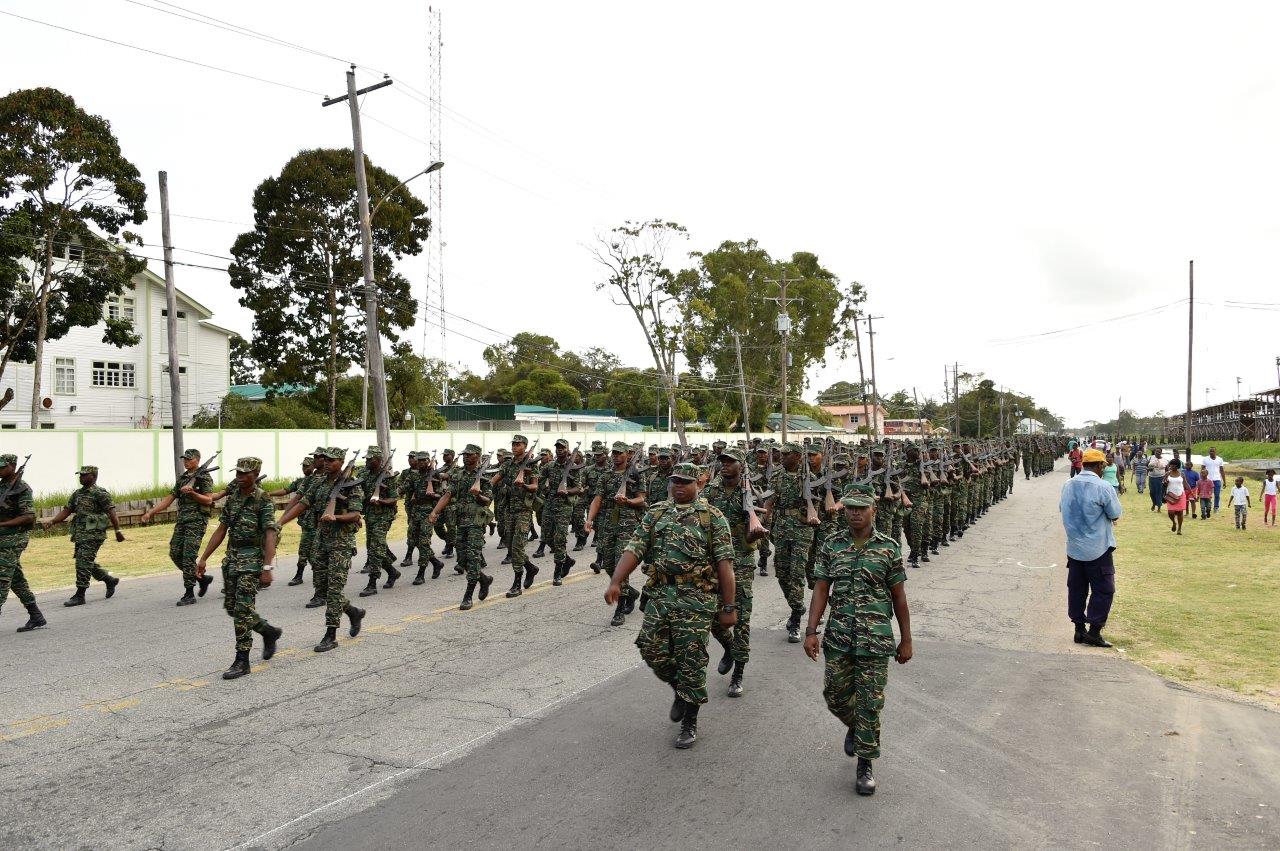