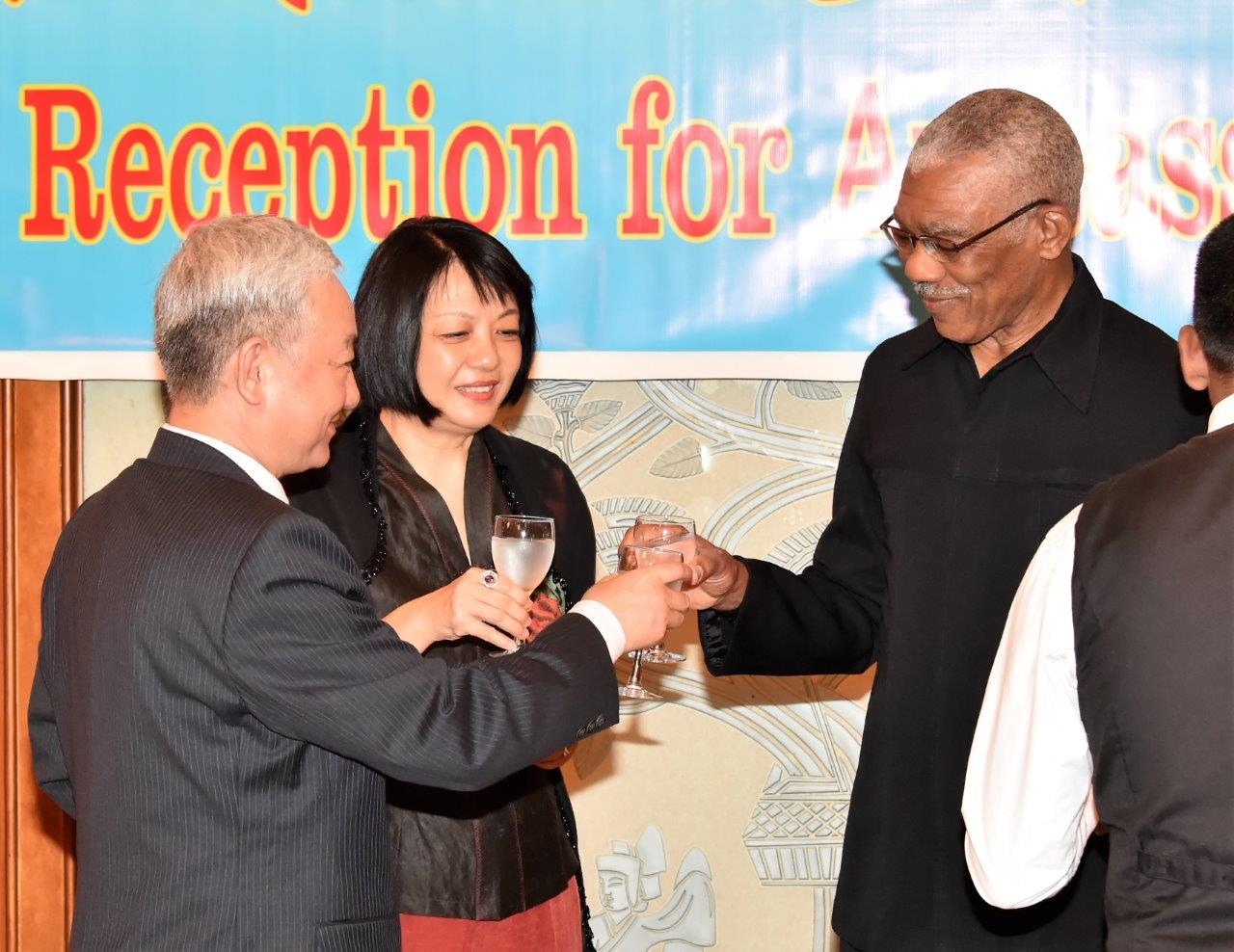 Georgetown, Guyana – (November 25, 2016) President David Granger, this evening, joined several Government Ministers, members of the Diplomatic Corps, Chinese nationals and members of the Opposition in bidding farewell to the Chinese Ambassador to Guyana, Mr. Zhang Limin at a cocktail ceremony held at the Chinese Embassy.

During brief remarks, the President commended Ambassador Limin’s efforts towards the strengthening relations between the Republic of China and the Cooperative Republic of Guyana, adding that Guyana salutes his personal efforts to ensure the success of the projects and agreements between the two countries.

“Guyana welcomes the Embassy’s public diplomacy in making contributions to small and large national causes; from bicycles to laptops. Ambassador Zang Limin has been relentless in expediting agreements, encouraging cultural relations, while watching over a growing community of Chinese nationals in Guyana. He has been an outstanding servant of his country,” the President said.

He noted that Ambassador Limin’s appointment four years ago energised Guyana-China relations, which can be seen in the increased impetus to investment, trade and other forms of cooperation between the two countries. The President extended his gratitude to Ambassador Limin for his affability and amity during his tour of duty in Guyana and wished him and his wife, Madame Liu Yiu “long, happy and pleasant retirement”.

Ambassador Limin, speaking through a translator, said that the China-Guyana relationship plays a significant role in the growing levels of the China, Latin America and Caribbean cooperation, and noted that the latter could not develop without friendly cooperation with Guyana. “Over the past several years China and Guyana have developed increasingly closer political relations. The heads of the two countries held bilateral meetings and there were frequent exchanges of visits …these visits enhanced our mutual understanding and further cooperation,” he said. 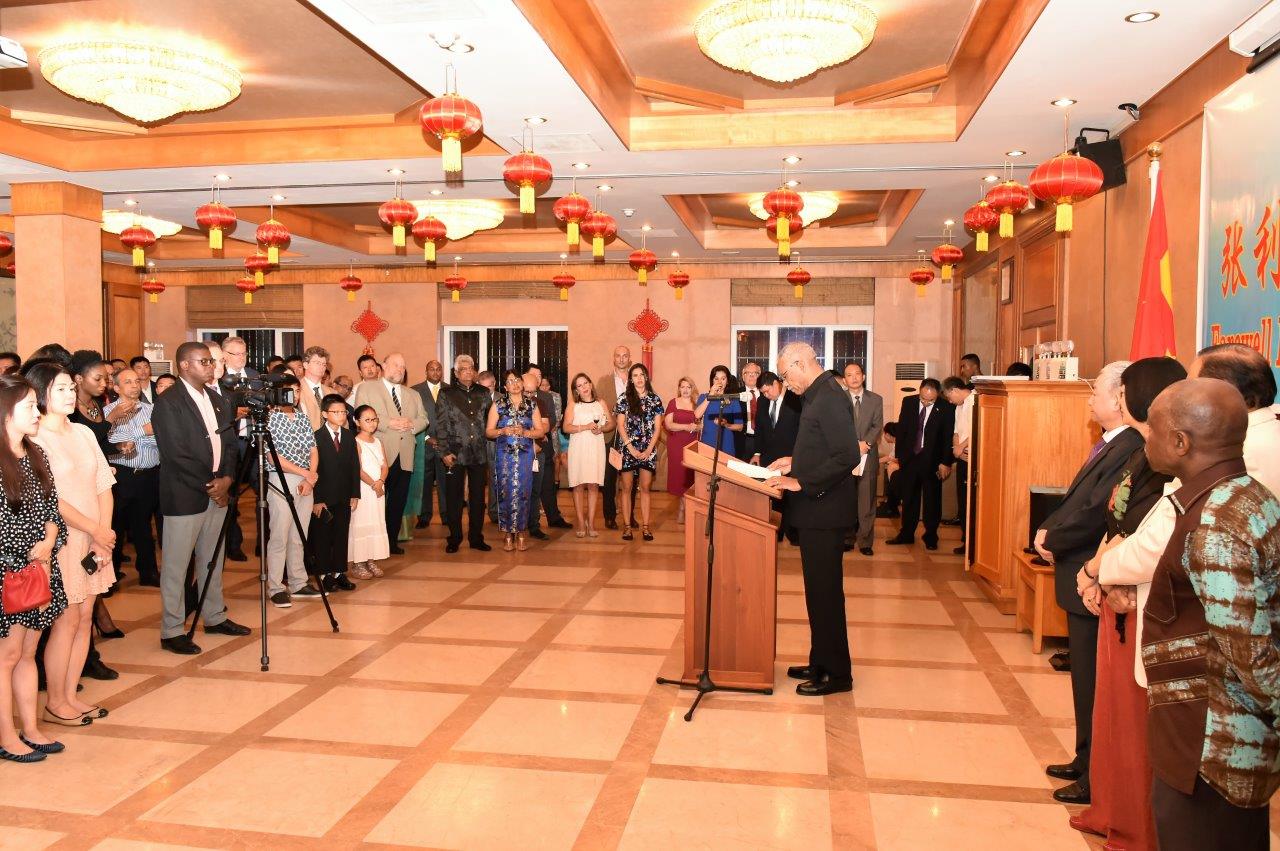 The President during his address to the invitees at the farewell reception for Chinese Ambassador to Guyana Mr. Zhang Limin this evening

He stated that more and more Chinese enterprises have come to Guyana for investment purposes. He said that within the past four years, capacity building to Guyana has increased, while personnel at various levels attended military, police, agricultural, economic, trade and media training in china. “All these achievements [could not] be realised without the attention that the two countries have given to the China-Guyana relationship as well as the support and help the Guyanese government and its people have rendered to the embassy and myself. I extend sincere gratitude to the government and the people and thank everyone for contributing to the China-Guyana relationship. I also thank the Diplomatic Corps for the support they have given to my work,” he said.

Guyana and China established diplomatic relations on June 27, 1972, eight months after supporting United Nations General Assembly Resolution No. 2758. This Resolution recognised the People’s Republic of China as “the only legitimate representative of China to the United Nations.” President Granger said that Guyana has enjoyed cordial relations with China for the past forty-four years. These relations, he said, have been based on mutual respect for each other’s territorial integrity and sovereignty, mutual understanding, cooperation for mutual benefit and non-interference in each other’s internal affairs. 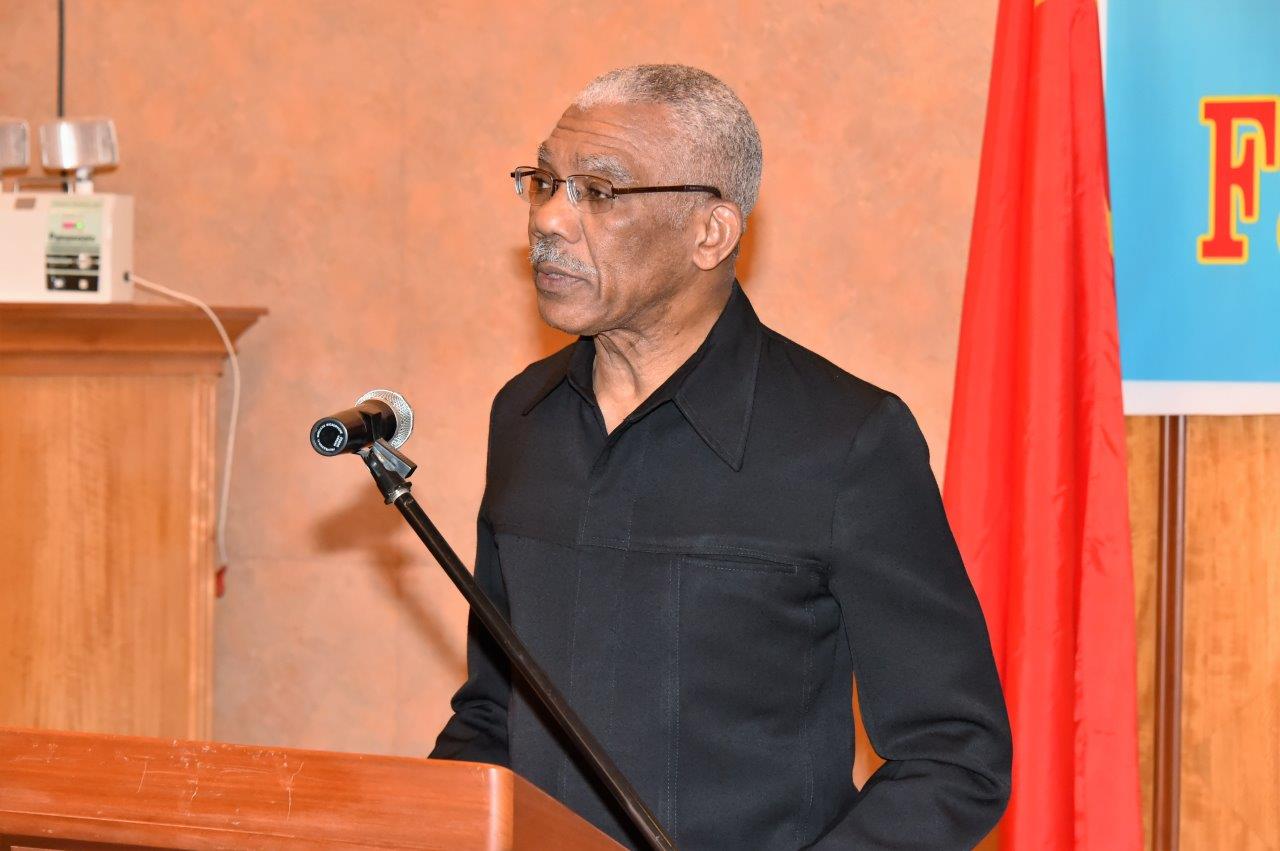