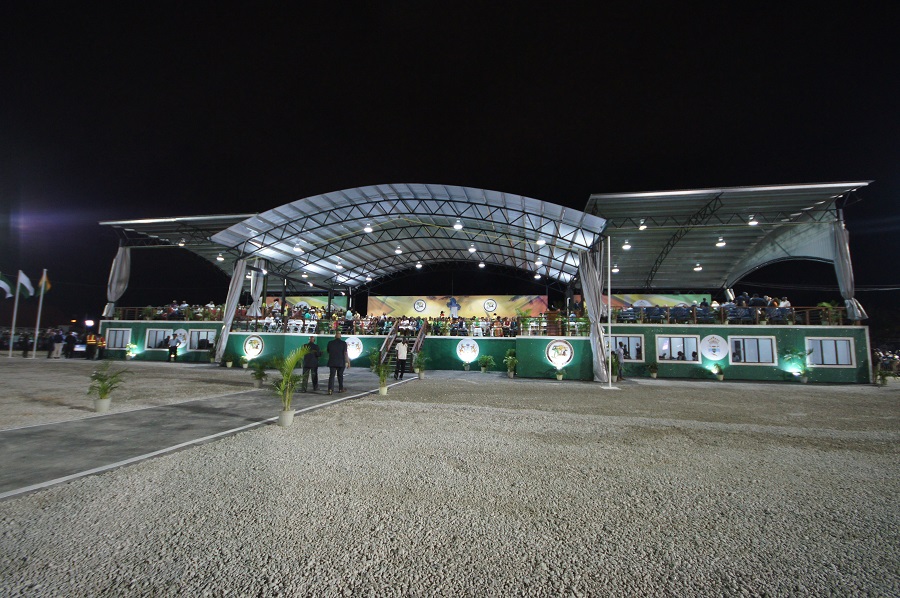 Georgetown, Guyana – (November 24, 2016) President David Granger, this morning, said Homestretch Development Incorporated (HDI) was established solely to facilitate completion of the D’urban Park Development Project in time for Guyana’s 50th Independence Anniversary celebration in the absence of budgetary allocations, following the May 2015 elections. The Head of State admitted that while this may have been an unusual course of action it was expedient at the time and Guyanese now have a valuable asset, which is a source of national pride and added that the Company is not a secret one and has been notified to the National Assembly.

The President iterated that there was nothing secret nor criminal about the D’urban Park Development Project when asked to respond to the Opposition’s claim that the Government had not been forthcoming with all of the information with regard to the D’urban Park Development Project, the creation and registration of HDI, which collected funds for the Project, or Minister of Education, Dr. Rupert Roopnaraine’s role as a Director on the company’s Board, during the recording of The Public Interest.

“When we went in to office, budgetary provisions were not made for the construction of that stadium in time for Independence celebrations in May 2016 and it was felt prudent to establish a special purpose company… when we realised that we had to engage in contracts and agreements with construction firms to build the stands and everything else that was involved in the stadium and as soon as we could, we terminated the work of that company and [transferred the project to] the Ministry of Public Infrastructure with the sole responsibility to compete the Project,” President Granger said.

He added that when his administration acceded to office in May 2015 some ad hoc measures had been put in place for the rehabilitation of the Independence Monument, which had been neglected for several decades, and to host the Inauguration Parade at the Guyana National Stadium at Providence, East Bank Demerara. However, since no budgetary allocations had been made for the construction of a stadium, it soon became clear that it was necessary to establish a short-term company to complete the project on schedule.

A view of the VIP pavilion in D’urban Park

“It was decided that a special purpose company called Homestretch Development Incorporated would be used to continue the preparations, which had been started, until the Government had passed the Budget and put other infrastructural institutions in place and when that came to an end the responsibility for HDI, that is particularly with regard to D’urban Park, transferred to the Ministry of Public infrastructure so there is nothing secret, or there is nothing criminal about HDI,” the Head of State said.

The President said that the company has only existed for six months and he regards it as a transitional company that enabled the administration to complete the Project. He said that he is grateful for the company and the contributions made by citizens, who helped the Government to reach its deadline and Guyanese are now the proud owners of a valuable asset. “I think a lot of Guyanese are proud of the asset, which we now possess. It belongs to the Guyanese people,” he said.

“We could not have done it before because of uncertainty about the budget and the speed with which we had to bring the Project to a conclusion by this year. It was just one year, but we have now in Guyana, the single biggest stadium… and it is a public asset, which will be there for all time. So we have a very important institution that is open to all Guyanese. You can have your Diwali, you can have Christian crusades, you can have Hindu and Muslim services there, but we have a valuable asset that we did not have before,” he said.

With regard to Dr. Roopnaraine’s role as a member of the Board, the President noted that it was only to represent the Government’s interest “because the celebrations, which we had aimed at, at the time of the establishment of the Company, concerned largely the 50th anniversary celebrations.”

Similar questions were posed to Minister of State, Mr. Joseph Harmon, this morning, during his post Cabinet Press Briefing. The Minister noted that while several of those questions had already been posed and answered by Minister of Public Infrastructure, Mr. David Patterson in a debate in the National Assembly at its last sitting on Tuesday November 22, 2016 it is important to note that the D’urban Park project has its genesis in the efforts of private citizens, who took a decision to support efforts aimed at converting an area that was essentially ‘a jungle’ into a public space. 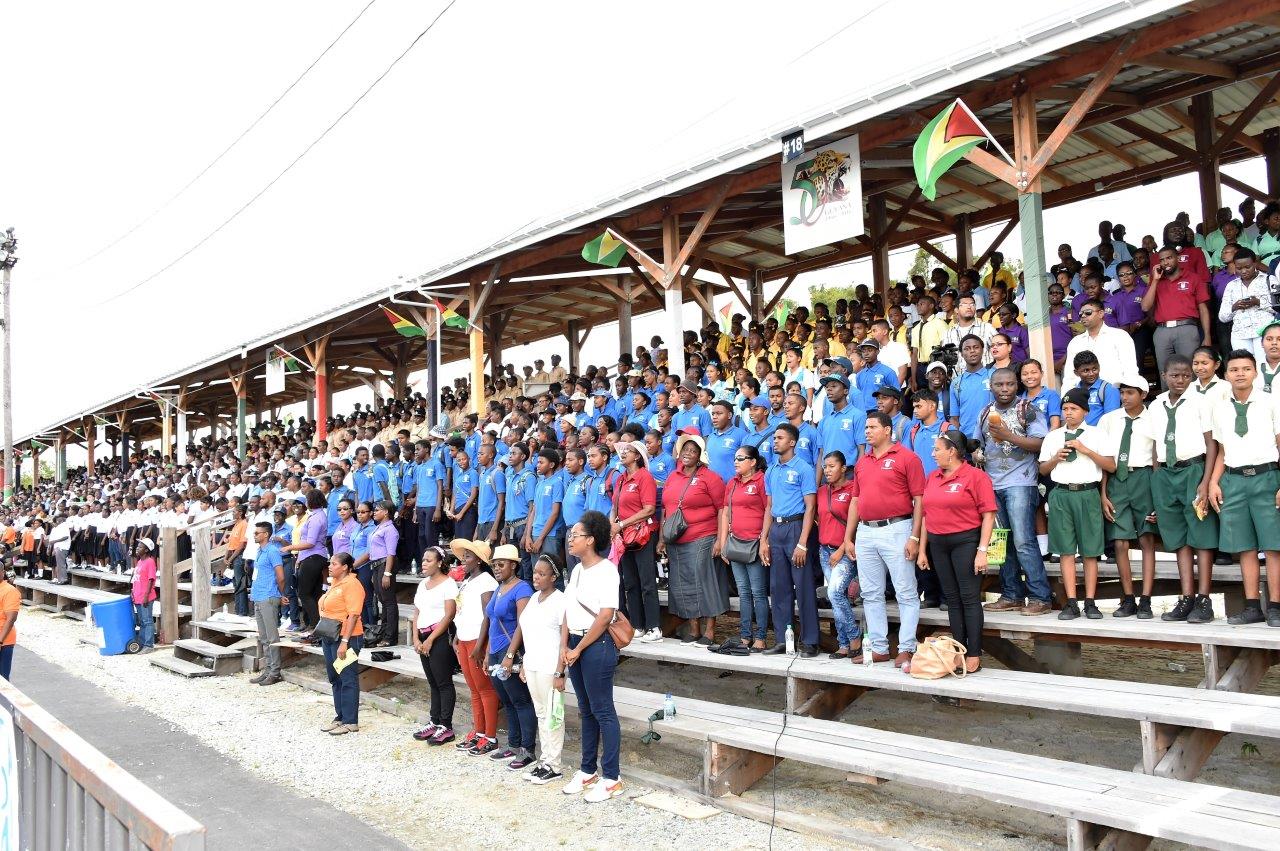 School children from various schools and institutions across the city fill the bleachers at D’urban Park for the Education Month Rally 2016.

Minister Harmon said that the company was established long after works started by public spirited citizens for the public good and it became necessary to establish it to source funding after their efforts had been exhausted. In giving a brief history of the events that led up to the founding of the company, he noted that after 50 years of Independence the Government was still hard-pressed to find accommodations for 50,000 people. The extraordinary turnout of persons for President Granger’s inauguration ceremony at the Guyana National Stadium in Providence, which accommodates about 17,000 persons and left several hundred others assembling along the roadways, brought that into stark focus.

As such, he said, when Government took the decision to transform D’urban Park into a public space it accommodated the public’s spirit of nationalism, which had been birthed on President Granger’s accession to office, which saw persons contributing to national life.

“The time when the company was established did not coincide with the time the work started because it started as private citizens coming forward and giving of their time and of their resources… It really was about private citizens coming forward to clean-up a public place for a public good. I want to make this distinction between what happened there at D’urban Park and what happened in the previous administration. The previous administration, they were using public assets for the benefit of a private few. I need to make that very clear… that this was private citizens contributing to a public good as opposed to taking public asset and converting it to private… benefit,” he said.

On April 19, 2016 President Granger mandated the Minister of Public Infrastructure to assume full responsibility for the D’urban Park Development Project as its completion date drew near.

Minister Patterson had also expressed confidence that his team could meet the deadline and realised the President’s vision of making the Park a beautiful and safe public space. The Guyana Defence Force’s Engineers Corps were also tasked with assisting the Minister’s team in this endeavour.

The Minister made good on his commitment that the venue would be completed in time for Guyana’s Golden Jubilee Anniversary celebrations and thousands of Guyanese turned out in their numbers, filling all the bleachers and spilling onto the verges for the national celebration. Minister Patterson, who had also indicated in July 2016 that his Ministry was working on ensuring all outstanding payments to contractors involved in the project were addressed, in an invited comment this evening, indicated that Cabinet, at their last meeting has favourable considered a proposal for such payments to be concluded.

Amidst heated debates in the National Assembly, Minister Patterson has repeatedly made disclosures about the company, previous managers of the Project, contractors and payments and has made it clear that “there is nothing to hide in the books of the Ministry” with regard to the company and the execution of the project.

Since its completion D’urban Park has hosted a number of national, cultural and religious events and is often used as a recreational, sport and exercise venue by residents of South Georgetown and others, who visit the area.

President reaffirms his commitment to assisting persons with disabilities