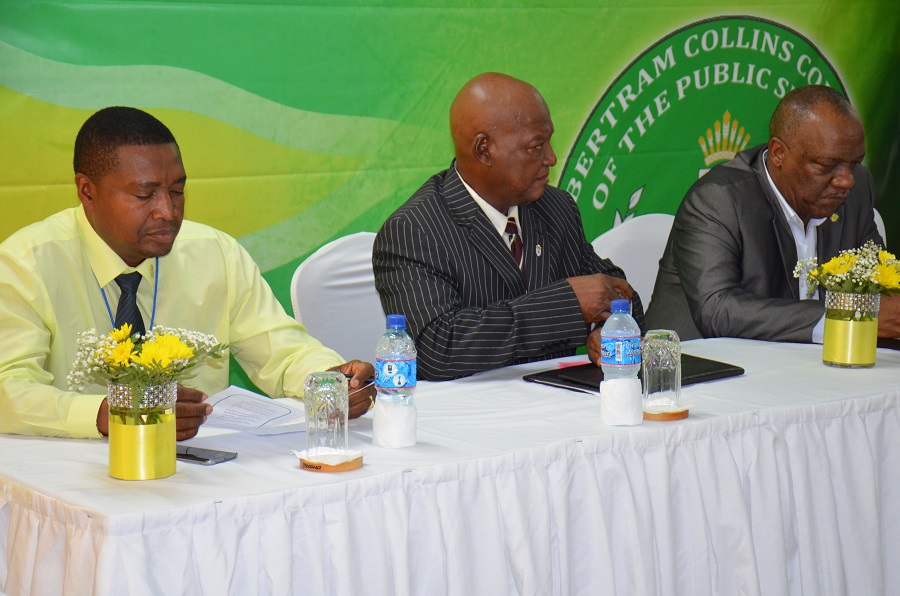 Georgetown, Guyana – (November 23, 2016) Fifty-nine young people from across the country were, today, officially installed as the first batch of cadets of the Bertram Collins College of the Public Service, at a glowing ceremony hosted at the Training Division of the Department of the Public Service, D’urban Street and Vlissengen Road, Georgetown. The Government has also provided each of these cadets with a laptop computer to assist them in their studies. When construction has been completed at the 21-acre campus that will be established at the Guyana Sugar Corporation’s location at Ogle, East Coast Demerara, the College will be relocated and expanded to include foreign service and other training.

Minister of State, Mr. Joseph Harmon told the cadets, who are between 17 and 21 years old, that they will play an important role in the development of Guyana, therefore, it is imperative that they embrace the tenets of College’s motto: “Integrity, Impartiality and Objectivity”. “You are the ones that will make a difference in Guyana. We are depending on you to make a difference. You’re young, you’re exciting and, therefore, the entire vistas of Public Service training is available to you,” Minister Harmon said in his feature address.

Members of the head table, from left to right: Mr. Reginald Brotherson, Permanent Secretary of the Department of Public Service, colonel Lawrence Paul and Minister of Minister of State, Mr. Joseph Harmon

The Minister said that the College is the realisation of President David Granger’s vision to have a trained, efficient and “unbribable” Public Service and further underscored the role that these cadets will play in transforming the sector. While several studies have been conducted on the Public Service, the first of which was done in 1968 by the late Bertram Collins, after whom the intuition has been named, Minister Harmon said that the College has been revamped based principally on the findings and recommendations of the 2015 Harold Lutchman Commission of Inquiry (CoI) into the Public Service. The Government has considered this wide-ranging report and plans to implement the 89 recommendations made therein in three phases.

The establishment of the College is an important step in executing the first of these three phases, he said, as the Government endeavours to chart a new course in providing “the kind of Public Service that is educated, is the engine of the executive, is innovative, understands the reality of Guyana so that the service, which you provide, can be efficient and effective”.

Minister Harmon also noted that it is in this regard that the Training Division was renovated, which is a testimony of the importance the President places on the training of Public Servants. Further, he said, in the wake of the Report revealing that there was the perception of a high level of corruption in public life under the previous administration, the Government is particularly concerned that the new cadre of Public Servants is “unbribable…well trained, properly paid and well accommodated”. 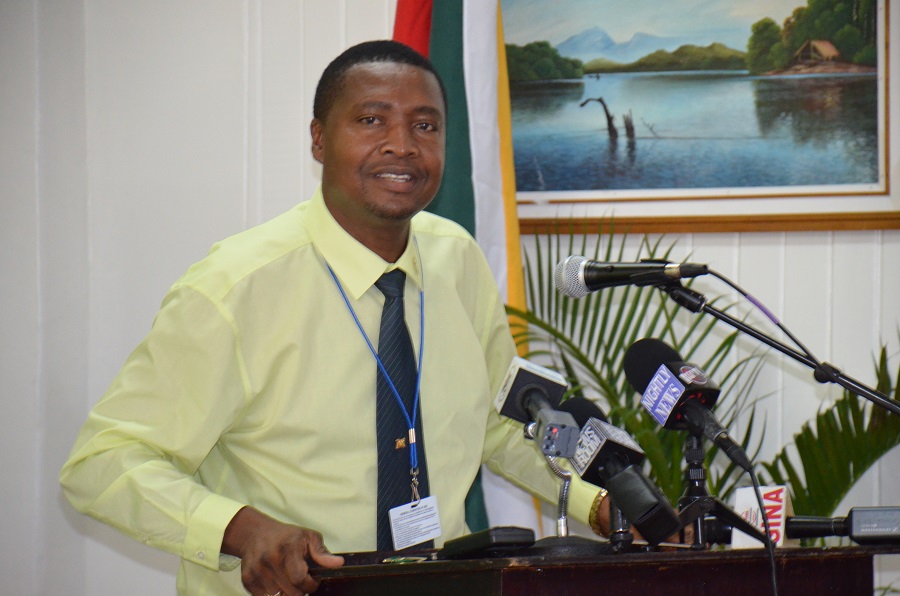 Mr. Reginald Brotherson, Permanent Secretary of the Department of Public Service, Ministry of the Presidency told the cadets that they are in an exciting time in the development of the Public Service.

Although the initial training programme being offiered will be focused on entry-level public servants, it will also be provided for those at the middle and senior management levels. This will be undertaken in collaboration with the Government of Canada and the governments of some Caribbean countries for high-level management Public Servants “to produce a quality of individual that can serve the Region”. The Training Division of the Department of Public Service will also continue to provide on-the-job training to augment the skills of current Public Servants.
PTO

“So it is a holistic approach…and we hope that that approach will take Guyana to a place where we can be proud of the people we call Public Servants,” the Minister said. 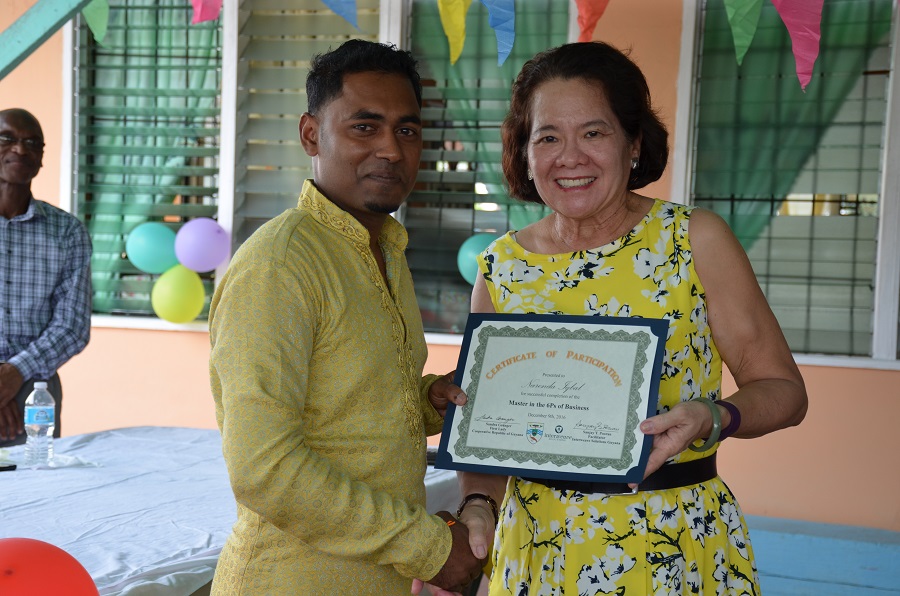 Minister of State, Mr. Joseph Harmon and one of the new cadets at the Bertram Collins College of the Public Service.

Mr. Brotherson also told the students that their training will be undertaken at the cost of the taxpayers and, as such, every effort will be taken to ensure that they are tuned in to the needs of the population. “You are going to be part of the administration in this country. You are going to be setting the standards to prove to the world that you are “unbribable”, you’re not corruptible,” he said.

Meanwhile, in giving an overview of the mission of the College, Senior Executive Director, Colonel Lawrence Paul said it would undertake the training of everyone entering the Public Service as “a properly functioning Public Service is vital to the smooth running of the country”. The one-year programme will see students being trained in 17 subject areas in a format that includes six months of classroom training and six months of practical instruction.

“Training will make use of both formal and informal techniques and will include continuous assessment and evaluation components. The visits and attachments are meant to better prepare the cadets to take on their assigned roles in the Public Service and widen their understanding of public institutions. But more importantly, they should be able to understand how Guyana works and should better appreciate why they should dispense their duties with integrity with impartiality and objectively,” he said.

Many of the young people said that they were glad to be given the opportunity to advance their education through the College. Mr. Mark Tappin, who is 18-years-old, said, “If it wasn’t for this, I wouldn’t know what I’d be doing in life. It’s actually [given] me a path to what I want to do”.

Mr. Raoul Ramdyal is also pleased that the College has started and is happy to be the recipient of a new laptop computer. “I’m really anxious…because of what it entails. It requires a lot of you to be able to keep up with what the Government and people expect from persons in the Public Service,” he said.

Ms. Melisha Seeram is grateful to be enrolled at the College and she endeavours to live up to its motto. She is also pleased to be the recipient of a new computer as she embarks on the programme. “That will be amazing, really amazing because today, in a modern society, we use technology for most everything so we won’t having be carrying a bulk of books and pens so it will be easier here.