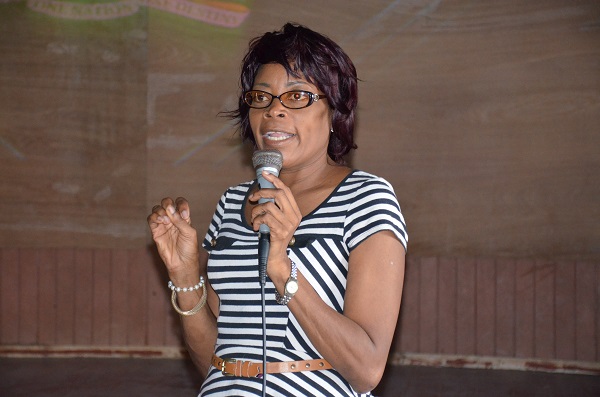 Georgetown, Guyana – (November 16, 2016) The Ministry of Social Cohesion, yesterday, hosted the last of its 30 planned Regional Sensitisation and Strategic Planning Consultations in Kwakwani, Sub-Region Two and is poised to start its Validation Workshop, which will bring together key stakeholders, who participated in the process, to provide input and review a draft of the National Strategic Plan on Social Cohesion in Guyana 2017-2021.

Ms. Sharon Patterson, Programme Manager at the Ministry of Social Cohesion, gestures as she makes a point during her address at the Regional Sensitisation and Strategic Planning Consultation, held in Kwakwani, Sub-Region Two.

Programme Coordinator at the Ministry, Ms. Sharon Patterson said this exercise is yet another step that the Ministry is taking to foster stakeholder buy-in in the process. “We want them to have a look at that Plan. We want to start to talk about arrangements for implementation, but also, we want to have inputs and suggestions for the finalisation of that Plan,” she said. The Validation Workshops are scheduled to be held on December 7 and 8, 2016.

Overall, the Ministry is pleased about the response to the consultations, which have served as a vehicle to raise awareness about social cohesion. An average of about 48-50 stakeholders have turned out for each of the sessions, with the largest numbers attending the meetings at Beterverwagting, East Coast Demerara (104), Diamond, East Bank Demerara (92) and Kwakwani (78).

“I believe the persons with whom we have consulted have a better understanding of what social cohesion is. I think there [was] always a general misunderstanding about what [it] is…. People [now] have an understanding of the vision and mission of a Ministry like this … and what a cohesive society really means for all of us and how that could be achieved….Moreover, I think that [they] understand their own roles in the process; what they can do to contribute to the social cohesion process in Guyana and so if we’re talking about what we’ve achieved; I think a high level of understanding and awareness. People’s own perceptions have been altered… and I think that is significant,” Ms. Patterson said. 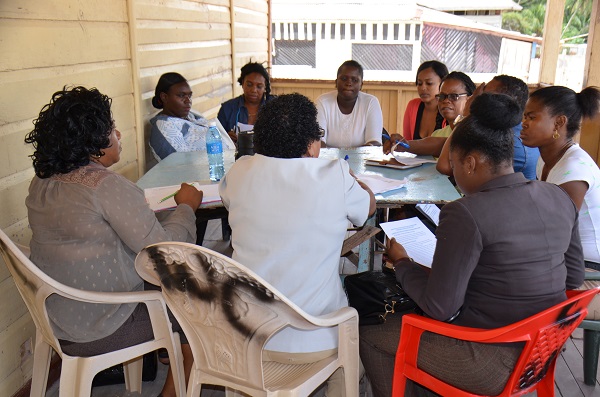 One of the working groups that participants were divided into to discuss the five focus areas on social cohesion.

Further, with support from the United Nations Development (UNDP), the Ministry is also hosting a complimentary online component to the exercise, which aims to engage young people in the process and provide an opportunity for them to contribute. While the face-to-face consultations have been completed, the digital component is still ongoing.

Throughout the Consultations, the participants were given the opportunity to provide feedback on five thematic areas that are hampering social cohesion in Guyana: economic equity and opportunities, citizens’ safety and security, social inclusion and tolerance, inclusive and participatory governance and harmonious ethnic and race relations. Of the five, safety and security, economic equity and harmonious ethnic relations have emerged as the ones that are the major preoccupations of the public and therefore, the ones most likely to hamper the process of social cohesion.The Ministry is also currently conducting Diversity Education Inclusion Training sessions. Ms. Patterson said that nine sessions have thus far been completed. Sessions have been held in regions Three and Four and they are currently ongoing in Mabaruma, Barima-Waini (Region One). Plans are also in train to host two, two-day sessions in Corriverton and Rose Hall, both in East Berbice-Corentyne (Region Six), before the end of this week. Eighteen more sessions have been planned before the end of 2016. These sessions are an integral part of the Ministry’s work plan and the National Plan 2017-2021.

“Inasmuch as the Strategic Plan has not been completed we have an active Strategic framework. Since the Ministry started, we have been working and these are all activities that have emerged from the social cohesion roundtable and so when the Strategic Plan is done it will consolidate what we are currently doing… some of what we’re talking about now I’m sure will emerge as actions for us to undertake in the Strategic Plan,” she said.

Meanwhile, Lead Consultant for the Social Cohesion National Strategic Plan, Dr. Thomas Gittens said that countrywide consultations have provided tremendous insight into the needs of those communities. At yesterday’s session, stakeholders from Aroiama, Potville, Kwakwani Park, Kwakwani Waterfront, Berbice River and the indigenous community of Hururu gathered at the Kwakwani Workers’ Club to discuss the challenges that are hampering social cohesion in their communities. 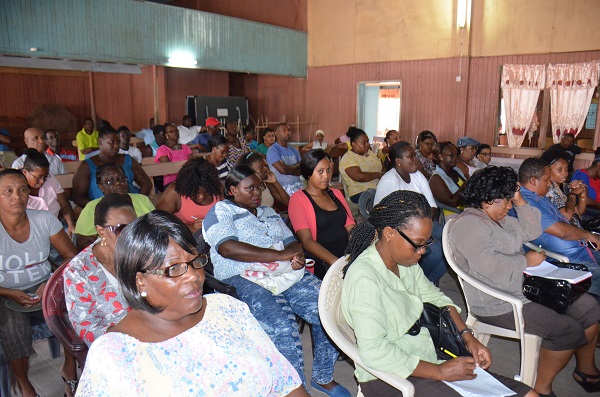 Participants in the Regional Sensitisation and Strategic Planning Consultation, which was held in Kwakwani, Sub-Region Two yesterday

Dr. Gittens said that the meeting was informative as it generated many good ideas. “There are specific issues that came out of Kwakwani, as we’re trying to do with these consultations. We’re trying to get a sense from the communities as to what their particular issues are, the particular challenges are, and what they see as their major social cohesion challenges, whether it be in terms of economic issues or security and safety or inclusion or race or governance … so Kwakwani did not disappoint. Kwakwani was, I think, quite instructive in terms of the issues here and overall I’m very pleased,” he said.

The participants were invited to provide feedback on the five thematic areas. Concerns about economic equity and openness and safety and security were among the most prevalent. With regard to economic equity, Mr. Ian Forde, a retired Teacher and resident of Kwakwani Waterfront, Berbice River, “Many people … think it is a racial problem of race against race, but what I’ve observed is largely, or possibly, the issue of the poor against the rich; there is a battle there [between] the rich and the powerful and the poor and the powerless….Equal opportunities for poor people to get access to loans… to banking services… titles to their lands” would bring about a positive change for individuals, their communities and the nation as a whole.

With regard to safety and security, some residents posited that unemployment may be contributing to petty crime and urge the police to act now. Mr. Patrick Gonsalves, a resident of Kwakwani Waterfront, Berbice River, said, “[People] … coming to and fro need to be checked properly and properly identified in this community. So I would recommend that they [report] at the station,” he said.