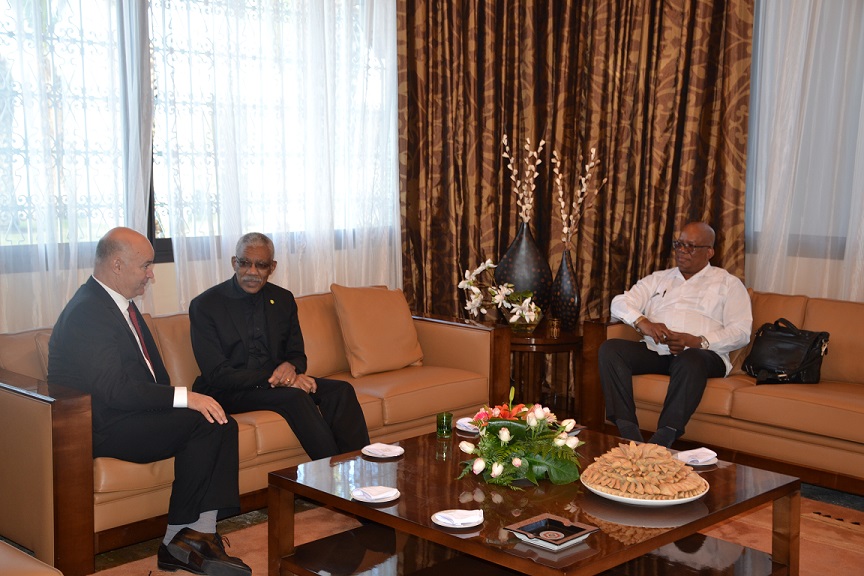 Marrakesh, Morocco – (November 14, 2016) President David Granger has described Guyana’s ‘green state’ policy as central to the long term development of the country, following a briefing meeting with the technical team attending the 22nd Session of the Conference of Parties to the United Nations’ Framework Convention on Climate Change (COP22) in Marrakesh, Kingdom of Morocco. The President, who arrived, today, was invited by the King of Morocco, His Majesty Mohammed VI to attend the Joint High Level Segment (HLS) of COP22 on November 15, 2016.

Speaking on Guyana’s participation at the event, President Granger, who is slated to be 28th of 156 speakers listed to address the HLS, said that it is critical that Guyana uses the opportunity to advance its case and ensure support for its push toward the development of its ‘green’ agenda and take advantage of the international momentum towards climate resilience and environmental management and protection. “We need to establish partnerships with the international community. We need to work with the institutions, which are propelling the changes taking place in the world at COP21 and 22 in particular… The engagement with the international community is very important and we need to make the world aware of the circumstances in which Guyana finds itself and we need to build partnerships with non-governmental organisations and with other States. We could not do that by staying out of COP22,” he said.

Noting that the technical team that makes of the recently established Department of the Environment is made up of highly qualified; highly committed technical people, the President said that it is now their job to flesh out Guyana’s policy position to ensure full implementation.

“The First step has been the establishment of the Department of the Environment on October 1, 2016. This is essential for national buy in, so that all Guyanese would understand the centrality of the concept of the ‘green state’ to the survival of the country and to the preservation of our very rich biodiversity. Before the establishment of the department there was a perception that the various agencies and authorities were operating in silos; that there was climate change, there was protected areas, there was biodiversity, there was wild life management but they had not been integrated into a coherent national policy. So one of the tasks of the Department of the Environment is to more or less enunciate a national policy for a ‘green’ state,” he said.

Head of the Department of the Envi ronment, Ms. Ndibi Schwiers-Ceres indicated that an initial framework, which will help to provide a clear roadmap for the development of the ‘green’ plan is expected to be completed by January 2017, with support from the United Nations’ Environmental Programme (UNEP). A technical body from that agency will arrive in Guyana on December 5, 2016.

Ms. Schwiers-Ceres said, “The ‘green’ plan is the developmental plan that is intended to guide the development of the country over the next few years; maybe 10 years or so. What we are seeking to do now is to ensure that we have a road map or framework in place that will guide the development of this plan, starting next year. The team expects that by January 2017 there will be this framework in place. What it entails is the coalescing of the existing polices, plans and programmes to see where we are; essentially a gap analysis. This will then determine how we move forward.”

Leading Guyana’s technical team at the Pre-COP, which includes Ms. Janelle Christian, Head of the Office of Climate Change, Mr. Marlon Bristol, Head of the Project Management Office and Ms Khandila Ramotar, Climate Change Officer in the Office of Climate Change, at the Pre-COP meetings, Ms. Schwiers-Ceres said that they were able to complete a Terms of Reference for capacity building at the national level so that Guyana is now positioned to gain support for the development of a cadre of trained professionals, who would be able to drive the ‘green’ agenda forward and, importantly, the implementation of Guyana’s Nationally Determined Contribution under the Paris Agreement.

“Going forward what Guyana needs to do now is to ensure that what we have been negotiating over the last few weeks is now implemented. To do that we require funding and we require strategic alliances or strategic partnerships with various countries. This will help us to build our capacity because the truth is we do not necessarily have the capacity to implement much of what the Paris Agreement requires. So if we are to develop strategic alliances with various countries then we would be able to build our capacity… We were able to complete a terms of reference on capacity building. So I believe that the appetite is there to ensure that developing countries develop their capacity to deal with climate change. What this means is that by 2017 those modalities that were essentially agreed to here will then start to be implemented so that from next year Guyana can begin to expect maybe funding to implement its national plan on climate change,” she said.

In addition to the official programme, the President will participate in a number of bilateral and other high level meetings including a meeting with the Minister of Climate and Environment of Norway, Mr. Vidar Helgesen and Secretary-General of the Commonwealth, Baroness Patricia Scotland.

Also on the President’s official agenda is a Lunch, offered by King Mohammed VI in honour of the Heads of participating delegations of the HLS at the Marrakesh Real Palace. The European Union Cocktail Reception for the exchange of views on the expected outcomes of the Conference is also on President Granger’s agenda. Minister of Finance, Mr. Winston Jordan is also part of the delegation.