‘Education must be a lifelong pursuit’ 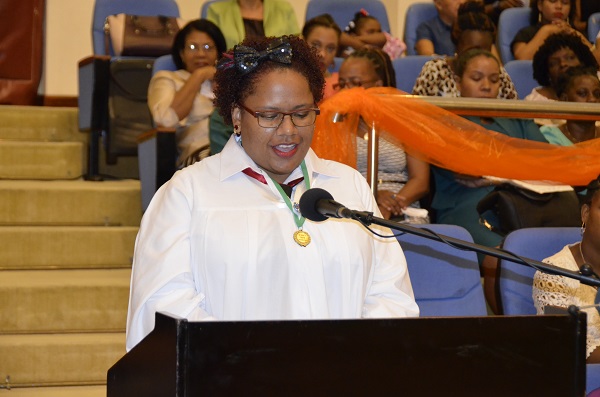 Georgetown, Guyana – (November 10, 2016) First Lady, Mrs. Sandra Granger, this afternoon, told the 2016 graduating class of the Carnegie School of Home Economics’ Craft Production and Design Division that “education must be a lifelong pursuit” in her feature address at their graduation ceremony, which was held at the Arthur Chung Convention Centre, Liliendaal.

“Educated persons enhance their communities. They bring a level of thought, planning and order, not only to their own lives, but will add value, too, to their families and the communities, which they inhabit,” the First Lady said at the ceremony, which was hosted under the theme “Dream big, reach higher, serve purposefully for the enhancement of our communities”.

Ms. Gizzelle Lopes, Valedictorian and Best Graduating Student in Catering and Hospitality tells graduates to celebrate their achievements and aim to better themselves as she delivered the charge at the Carnegie School of Home Economics’ Craft Production and Design Division graduation ceremony.

Mrs. Granger also noted that in today’s fast-changing world, the new graduates should view the qualifications that they have received as the first step on their path to success. “The certificates and diplomas, which you are receiving today, are the first steps in making your dream of personal and professional success come true. For you have worked hard to be exactly where you are today. You have recognised that you can reach higher and that you will fulfil your dreams if you educate yourselves,” she said.

The First Lady also noted that while some of the members of the graduating class intend to use their newly gained knowledge to focus on home improvements and others may plan to advance their studies, there are others who may be thinking about establishing businesses. “This is why you must know the value of what you are doing and making because if you make a dress no store will have it and that is what you can tell your customers. Our tourism industry is expanding. It stands to reason that those who work in the service and tourism sectors must know all the international standards and norms so that they can compete in the market… An excellent product, a competitive price and good customer service will guarantee you return customers,” she said. 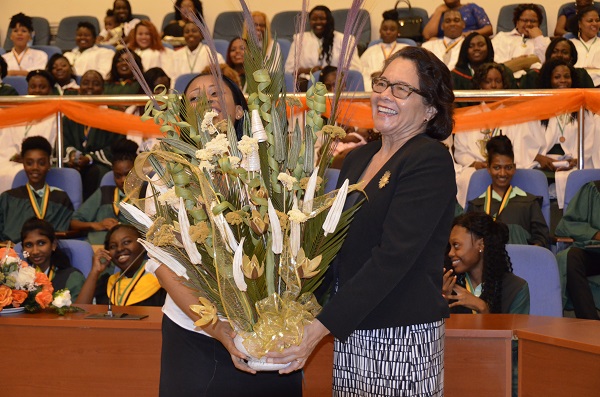 A huge thank you! First Lady, Mrs. Sandra Granger and Head Prefect of the 2017 graduating class of the Carnegie School of Home Economics, Ms. Sheina Ramsden share a laugh as they display a stunning bouquet the school presented to the First Lady in appreciation of her attendance.

Meanwhile, Valedictorian Ms. Gizzelle Lopes told her colleagues that they should be proud of their achievements as all “the pain, tears and frustration, hard work and dedication” have paid off. She also reminded them that there is potential for greatness in each of them and urged them to try to better themselves. “Simply being better than those around you is not enough, you will only realise you’re true potential when you push to be better than you are,” she said. Ms. Lopes also cautioned them that along with the victories, there will be failures and urged them not to become paralysed by the fear of failure, but rather “to try to be better than your best and try to do so fearlessly”.

Ms. Penelope Harris, Principal of the School celebrated the achievements of its graduates, who matriculated from the Carnegie Hospitality Institute and the Craft Production and Design Division, which includes Commercial Food Preparation, Visual Arts, Garment Construction, Interior Decoration, Household Management and General Cosmetology. She noted that the School has participated in several significant local and international events this year, including Guyana’s Golden Jubilee Independence Anniversary programme.

Ms. Harris also said that the School is continuing to modernise its programme in order to realise its vision of becoming the “leading institution and authentic voice providing quality training in Home Economics and Hospitality in Guyana”. She also commended instructors Ms. Kavita Moore, Ms. Avril Boston and Ms. Carla Lewis for having achieved 100 percent passes and no dropouts from their classes over the past school year.

In delivering the charge, Ms. Cheryl Sampson, Technical Advisor, Ministry of Education advised the students to hold fast to the principles of quality, discipline, etiquette, creativity and service that they have learned at the school. “I charge you to carry yourself with dignity and grace. It is your duty to keep the flag of the institution flying high,” she said.

The School, which was established by Scotsman, Mr. Andrew Carnegie, in 1933 as the Carnegie Trade School for Women was funded by the Carnegie Board of Trustees until the Government of Guyana assumed full responsibility for it in 1973. Since then, over the years, its curriculum has expanded to include competency-based programmes, which certify students based on their proficiency. The School also offers certificate and diploma programmes that are accredited by the Ministry of Education, and are open to both male and female students, including early school leavers.