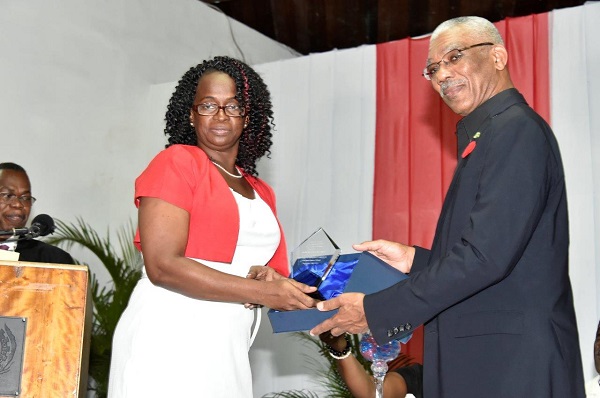 Georgetown, Guyana – (November 10, 2016) President David Granger, this evening, called on the Guyana Trade Unions Congress (GTUC) to embrace a new model of trade unionism, one which can ensure that the workers they represent are prepared and equipped for the future in a changing world, where technological advancements and the pursuit of a ‘green’ state are realities.

President Granger receives a token of appreciation from the Treasurer of the GTUC, Mrs. Kim Halley

Addressing the opening of the GTUC’s 4th Triennial Delegates Conference, at the Critchlow Labour College’s Joseph Pollydore Auditorium, which is being hosted under the theme “Labour Policies; a Prerequisite in creating a ‘Green’ Economy’, President Granger said that while the GTUC should be proud of its historical record as it was a vanguard of the struggle for a good life for workers, the GTUC’s model now needs to be re-examined and the delegates at the Congress must now look at its role and redefine itself. President Granger said that the Trade unions ought to consider the changes that are taking place not only in Guyana but around the world and this includes the pursuit of a ‘green’ agenda, as the world tries to grapple with the effects of climate change and global warming.

“Guyana is to become a ‘green state’ and in so doing can become a workers’ paradise. Our concept of a ‘Green state’ rests on four pillars: the provision of educational, environmental services and ecotourism, the protection of our biodiversity and wildlife and the management of our coastal zone, rivers, wetlands and protected areas, the generation of sustainable energy and the mitigation of the adverse effects of climate change. These are some of the pillars on which the green economy stands and this is capable of generating new types of workers. A new model for trade unionism, appropriate to the ‘Green State,’ must emerge. The old model has outlived its usefulness. It is time for new wine in new wineskins. It is time for new thinking in today’s trade union movement,” the Head of State told the Congress. 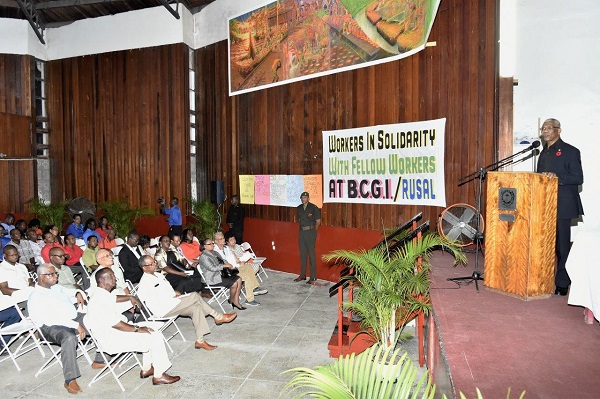 Additionally, the President noted that there is the need for the Congress to focus its attention on the re-education of the workforce to ensure that not only are they able to take advantage of the emerging opportunities as a green economy develops but they must also be prepared to compete in a knowledge based and technologically advanced world.

“It needs to take account of changes in workers’ well-being over the past 75 years; the changes needed to change the quality of lives of workers. The struggles of workers in Guyana over the past one hundred years have paid dividends. The working class is still confronted, however, by many challenges. We need a new model of trade unionism and to prepare the workers for the future. A ‘new model’ of trade unionism is needed to build on these successes and promote 21st century trade unionism. Technology has rendered certain jobs redundant and led to downsizing in many industries. Outsourcing has added to job losses. Globalisation has led to jobless growth in some instances. These developments have weakened the trade union movement. It is no secret that the membership of trade unions has shrunk. It is estimated in Guyana less than 20 percent of the workforce is now unionised,” the President said. 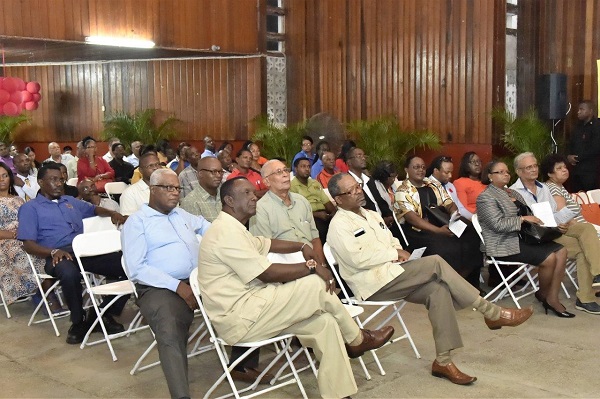 A section of the gathering at the opening of the GTUC’s Congress, earlier this evening.

Also, President Granger believes that the Unions, in addition to supporting the development of a highly skilled workforce, can play a role in encouraging a new kind of worker, one that sees himself as more than a wage earner but instead, as a job creator, who can contribute to the development of the economy of Guyana.

“We are living in a globalised era. Knowledge-based industries are the main drivers of economic growth and competitiveness. Workers need to be educated and skilled if they are to function effectively in the workplace. Workers needs to be educated if their upward mobility is to assured. The provision of educational services for workers and the unemployed must become the central focus of any organisation that is committed to protecting the rights of workers. The trade union movement must position itself to promote self-employment amongst workers as a means of reducing unemployment. Mechanisms such as credit unions run by trade unions can help the unemployed with credit to launch their own businesses. The GTUC must examine ways to provide seed capital, skills training and mentoring to encourage job creation through entrepreneurship,” he said.

He noted that the new model of trade unionism must be aimed at restoring workers’ confidence and enhancing capacity-building.

Quoting the International Labour Organisation’s World Employment Social Outlook 2015 Report, President Granger said that “employment growth is weak, partly because of the decline in global demand and falling productivity. Globally, only 50 percent of workers are in wage and salary employment; employment is shifting towards part-time, single, self-employment and contributing family work, which are anticipated to constitute 30 percent of new jobs between 2015 and 2019.”

President Granger said that already, serious challenges are being posed for the unionisation of workers and the protection of their rights by the diversified, fragmented nature of employment markets.

“The GTUC, as an association of trade unions, has to redefine itself in light of these challenges, which confront the entire labour movement in sugar, bauxite, the public service. Its attention has to be concentrated on addressing the concerns of the working class, including those who are unemployed,” President Granger said. The President further assured the GTUC that his administration will has no vested interest in retarding the development of the working class or the trade union movement as he urged the unions to feel free in seeking new pathways to advance their workers’ interests.

Meanwhile, Mr. Leslie Gonsalves, President of the GTUC, in his remarks, while recognising the restoration of the collective bargaining process by the Government, admitted that indeed the Trade Unions in Guyana have been facing severe challenges over the past years. They can only be addressed he said if they are recognised and confronted.

“It is entirely appropriate that we in the Guyana Trade Union Congress express our pleasure over the fact that just a few months ago, a framework was created for the restoration of collective bargaining between the Guyana Public Service Union and the Government of Guyana after a number of years, during which the facilities were denied. This is an important achievement and one which we must hope that we can build upon. There is work for the labour movement to do. There is a need for us to develop and focus on a collective labour agenda; an agenda that addresses the growth of our movement and the welfare of our workers,” he said.

‘Education must be a lifelong pursuit’