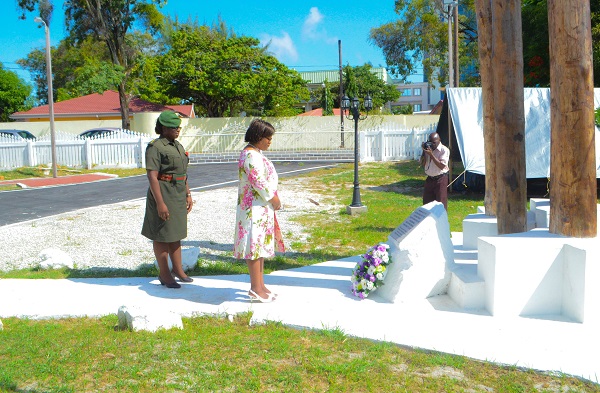 Georgetown, Guyana – (November 09, 2016) Newly accredited High Commissioner of The Republic of South Africa to Guyana, Ms. Xoliswa Nomathamsanqa Ngwevela, this morning, placed a wreath at the African Liberation Movement Monument at the Umana Yana, in a show of appreciation for Guyana’s support for the struggle against apartheid in that country. The Liberation Monument was constructed by the Government of Guyana and is dedicated to the freedom fighters of southern Africa.

High Commissioner of the Republic of South Africa, Her Excellency Xoliswa Nomathamsanqa Ngwevela, today, visited the African Liberation Monument in the compound of the Umana Yana to lay a wreath in commemoration of those who continue to fight for freedom from human bondage

President Granger, earlier in the day, during the presentation of the Letters of Credence, told the High Commissioner that Guyana, a small state in South America, played a big role in the struggle to dismantle apartheid, liberate southern Africa and ensure majority rule in the Republic of South Africa.

These contributions did not go unnoticed and in 2015, the African National Congress and the Government of the Republic of South Africa conferred the Order of the Companions of O.R. Tambo Award to the late President Burnham. However, this award was never officially handed over to the family of the late President. The main criterion for this award dictates that the recipient “promoted South African interests and aspirations through cooperation, solidarity and support.”

President Granger said that Guyana, under the leadership of President Burnham, demonstrated this solidarity and support through advocacy at all available international forum, including the Caribbean Community, the Commonwealth, the Non-Aligned Movement and the United Nations, to ensure the end of apartheid in South Africa. “Guyana sponsored and co-sponsored resolutions, at the United Nations, which condemned this racist system and which called attention to acts of brutality committed against opponents of this system,” he said.

In a book titled ‘Forbes Burnham and the Liberation of Southern Africa’, President Granger had described how the then Government of Guyana, headed by President Burnham, played a critical part in the fight for freedom for the people of South Africa and other African nations.

The book details how President Burnham, “as Head of State and Government, pursued assiduously, the causes of freedom for the people of South African and of other southern African States. President Burnham even established a High Commission in Lusaka, Zambia in order to improve Guyana’s diplomatic, financial and material support.”

It was noted that at ‘great risk’, the then President of Guyana, allowed for the passage of a Cuban aircraft to transport troops to Angola. This move aided the liberation of Angola and Namibia at the Cuito Cunavale.

“President Burnham’s commitment to the liberation struggle in Africa was born of his dedication to the principle of the freedom and the right of self-determination of all people. He is on record for condemning the suppression of the Mau Mau revolt in Kenya in 1953, suppression of the disturbances in Nyasaland in 1959 and the massacre of Africans in Sharpeville and Pondoland in 1960,” the book states.

“The Guyana Government remained fully involved in the African Liberation movement throughout the 1970s. Diplomatic, political and financial support was to be complemented by other substantial forms of practical and meaningful assistance. Guyana provided training to Namibian and Zimbabwean students as part of its contribution to prepare skilled human resources for independence, travel documents to certain African liberation personalities to facilitate their international movement in pursuit of their external campaign and annual financial contributions to the African Liberation Fund,” it further added.

Guyana also took the decision to withdraw its national team from the 1976 Montreal Olympic Games. This was in a show of support for an African boycott to protest New Zealand’s sporting contracts with South Africa.

Throughout the 1970s, as the Guyana became a Republic, its service to the southern African countries continued on the United Nations Council for Namibia. President of Tanzania, Mr. Julius Nyerere, during a visit to Guyana in 1974, said that Guyana has been a champion for the liberation of Africans and in the Non Aligned Movement. “The Cooperative Republic of Guyana is renowned to our people as this small nation has publicly identified itself with the progressive and liberation movements of the world,” he said.

At the 25th Session of the UN General Assembly, Guyana also used the opportunity to “co-sponsor five draft resolutions on the question of apartheid in the Special Political Committee.”