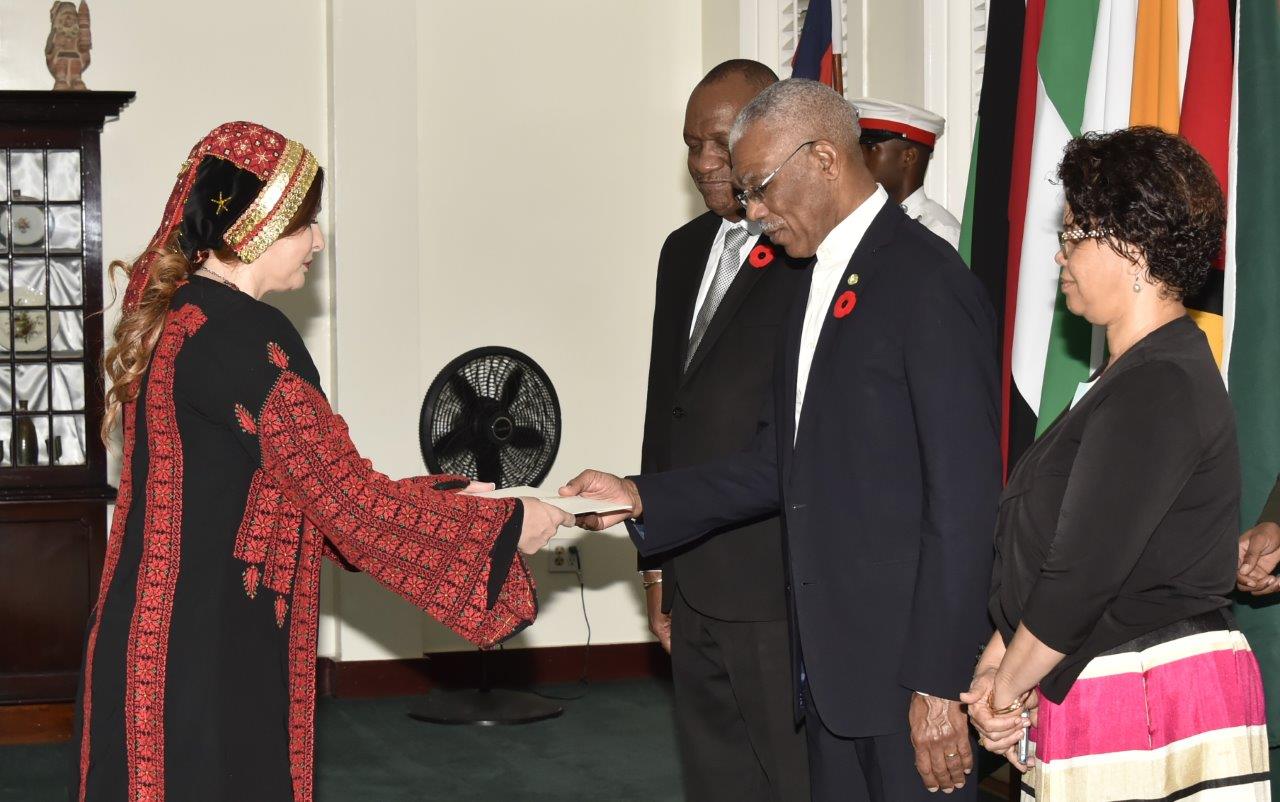 Georgetown, Guyana – (November 09, 2016) Newly accredited non-resident Ambassador of the State of Palestine to Guyana, Dr. Linda Sobeh-Ali, this morning, expressed her Government’s gratitude and appreciation to the Government and people of Guyana, for the country’s recognition and support for the rights of the Palestinian people, as she presented her Letters of Credence to President David Granger.

Dr. Linda Sobeh-Ali presenting her Letters of Credence to President David Granger, which accredits her as the Non-resident Ambassador of the State of Palestine to Guyana.

At the accreditation ceremony held at the State House, Dr. Sobeh-Ali, following the brief ceremony, said that the event is a historical moment and can be attributed to the promising advancement of bilateral relations between the two countries. She noted that it is a clear proof that Guyana has always been an ardent supporter of Palestinian rights and for that, the people of that country will forever be grateful.

“I stand before you today, Your Excellency, on behalf of the Palestinian people, who in the fullness of their pain, pride and anticipation for peace and freedom, thank you for your historical and firm solidarity with us and our legitimate aspirations to achieving statehood. This courageous stance on your part was particularly highlighted through your country’s official recognition of the State of Palestine on January 14, 2011. This recognition symbolises your solidarity with our people, who have been striving for a long overdue freedom and your commitment towards the right of nations to self-determination,” she said. 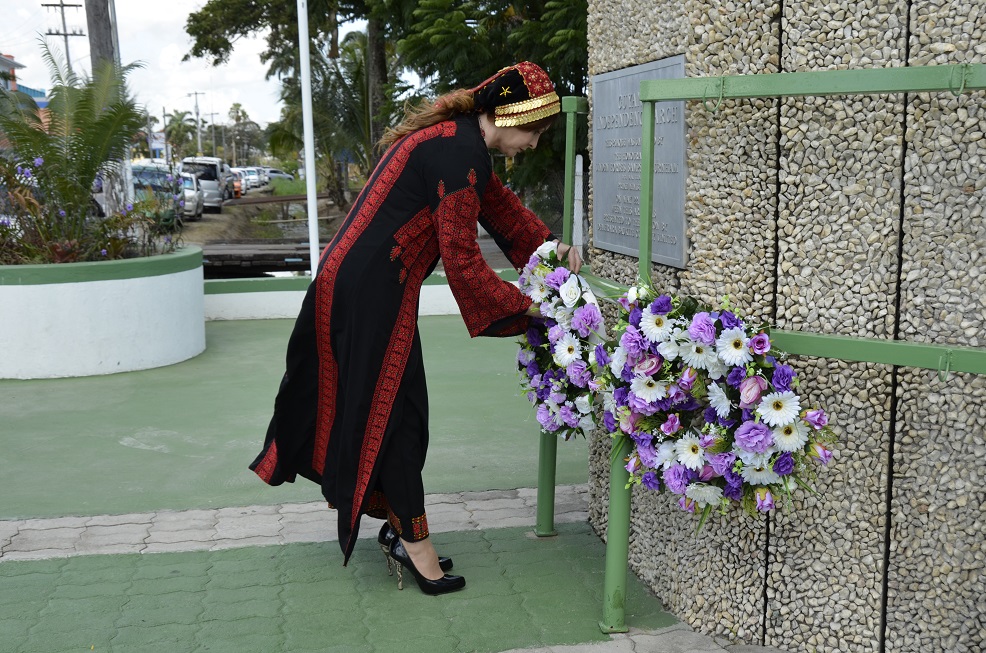 Dr. Linda Sobeh-Ali lays the wreath at the Independence Arch at Brickdam, in a show of respect to the Cooperative Republic of Guyana.

She highlighted that Guyana has always been an active member of the United Nations’ (UN) Committee on the Exercise of the Inalienable Rights of the Palestinian People and has voted in favour of Palestinian Rights numerous times in the international arena. Most notably, Dr. Sobeh- Ali said, is the country’s vote in favour of the UN General Assembly Resolution 67/19, which upgraded the State of Palestine’s status to non-member observer state. Most recently, Guyana has voted in favour of UN General Assembly Resolution 69/320, which permitted Palestine to raise its flag at the UN Headquarters in New York.

Recognising that the relations between Guyana and Palestine have the potential to be further strengthened, the Ambassador used the opportunity to invite President Granger to nominate an Ambassador to that country to serve Guyana’s interest. 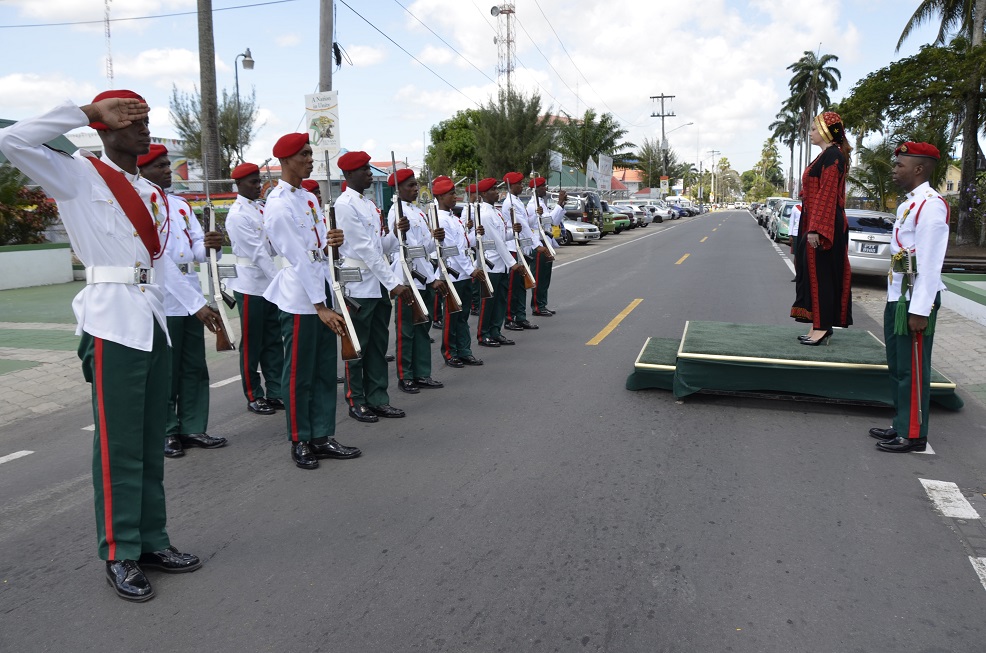 Newly accredited non-resident Ambassador to Guyana from the State of Palestine, Dr. Linda Sobeh-Ali, takes the salute from the ranks of the Guyana Defence Force (GDF), upon her arrival at the Independence Arch, earlier today.

“The significance of today lies in the fact that we are officially translating the provisions of the Joint Communiqué on establishing diplomatic relations in which our Government have signed in New York on February 21, 2013, into a concrete establishment of diplomatic relations at an ambassadorial level. We do cherish our relations with Guyana and invite you Mr. President to nominate an Ambassador of your own to serve your country in the State of Palestine and we assure you that we will fully cooperate and highly welcome your Ambassador within our capacity,” Dr. Sobeh-Ali said.

Meanwhile, President Granger, in his remarks, said that Guyana, historically, supported the struggle of the Palestinian people for self-determination and for a homeland. The Palestinian people’s right to an independent and sovereign homeland must form the basis for genuine and enduring peace, he noted.

The President added that Guyana upholds the rights of all peoples to promote their own development, free from the threat of force and aggression, abhors interference in the internal affairs of other states.

“Guyana was the first country in the Caribbean Community to recognise the State of Palestine. Guyana, on January 14, 2011, accorded recognition to Palestine as a free, independent and sovereign State based on its 1967 borders. Guyana and Palestine established formal diplomatic relations on February 21, 2013. Guyana will continue to support efforts to remove all obstacles to self-determination and human development of the State of Palestine. Guyana welcomes your accreditation as an opportunity to strengthen bilateral cooperation between our two countries,” he said.

As Guyana pursues its goal of creating a ‘green’ state, the President said that the country looks forward to working along with the State of Palestine to address issues such as the mitigation of the effects of climate change and for support for the achievement of the Sustainable Development Goals. “Guyana and Palestine will cooperate to seek solutions to the world’s environmental problems. This will help our respective countries to move more rapidly towards achieving the United Nations’ Sustainable Development Goals,” he said.

After the accreditation ceremony at State House, the Ambassador visited the Independence Arch on Brickdam, where she laid a wreath in a show of respect to the country.