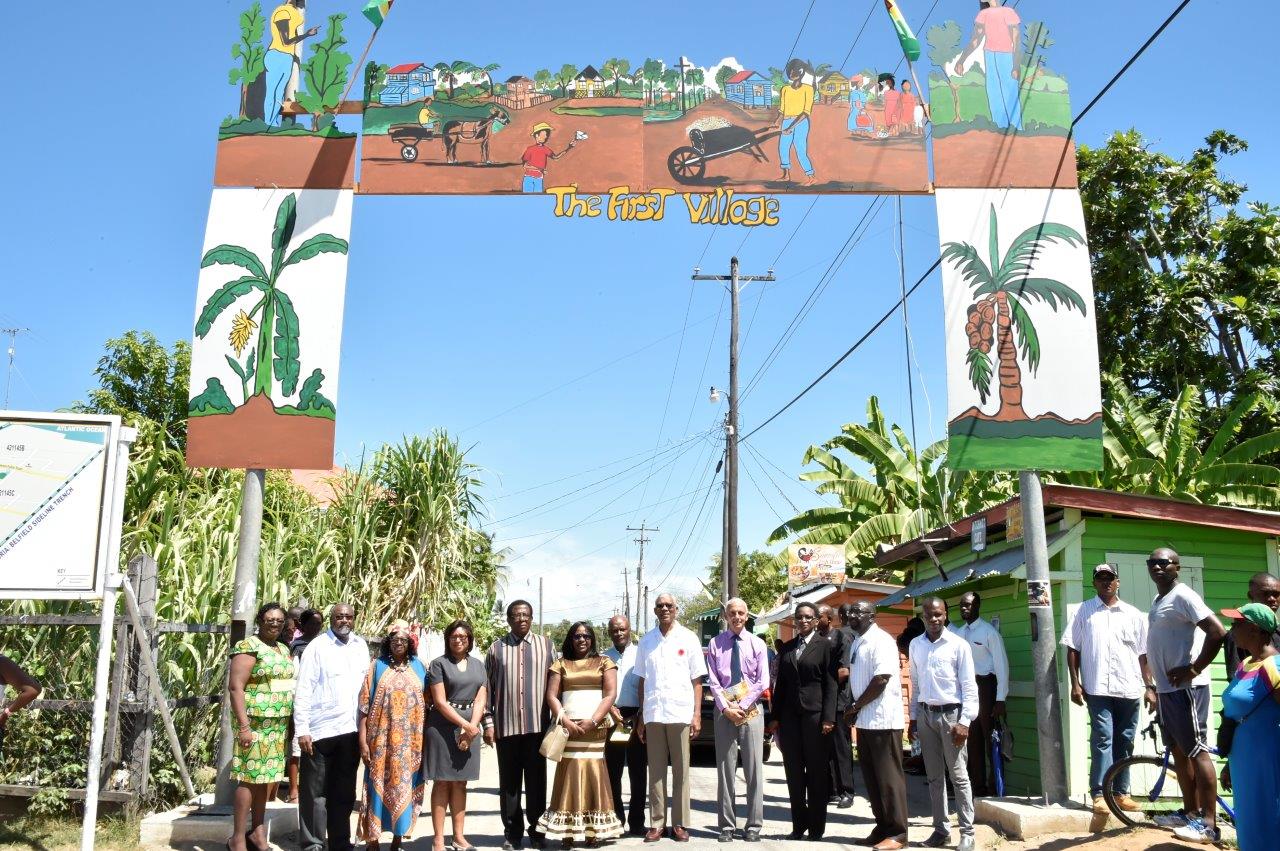 Georgetown, Guyana – (November 07, 2016) President David Granger, today, announced that his government will support viable micro-enterprise projects at the village level even as it must maintain macro-economic stability. The President made this announcement in his address at the National Day of Villages observance, held at the Lady Sendall Park, Victoria Village, East Coast Demerara as he urged the various villages across the country to return to the days of self-sufficiency, especially in the agricultural sector.

The Head of State said that Guyanese are children of villages and should use this day not only to reflect on the developments of the past, but to chart a new course by ensuring that the great potential for agro enterprises and self-sufficiency are again at the centre of the nation’s development.

President David Granger (centre), Ministers of the Government, regional officers and village officials at the “First Village’ Arch, which has been designed and mounted by the villagers.

The President said that the Government will not shirk its duties but will ensure that the necessary systems are in place to support and sustain micro-enterprise development. ”Development cannot take place in the absence of both growth and macroeconomic stability. Human development must be promoted particularly for the poor and other vulnerable segments of society,” he said.

‘Greater Victoria’, he said, developed a thriving agro-processing economy. It produced coconuts, from which it manufactured oil, used its by-products to make pig and poultry feed and coir, or coconut fibre, the natural fibre extracted from the husk of coconut to make mattresses. It also produced cassava, which was processed into cassava bread and casareep and fruit for beverages, table consumption and preserves. This must once again become the norm for the village the President said. 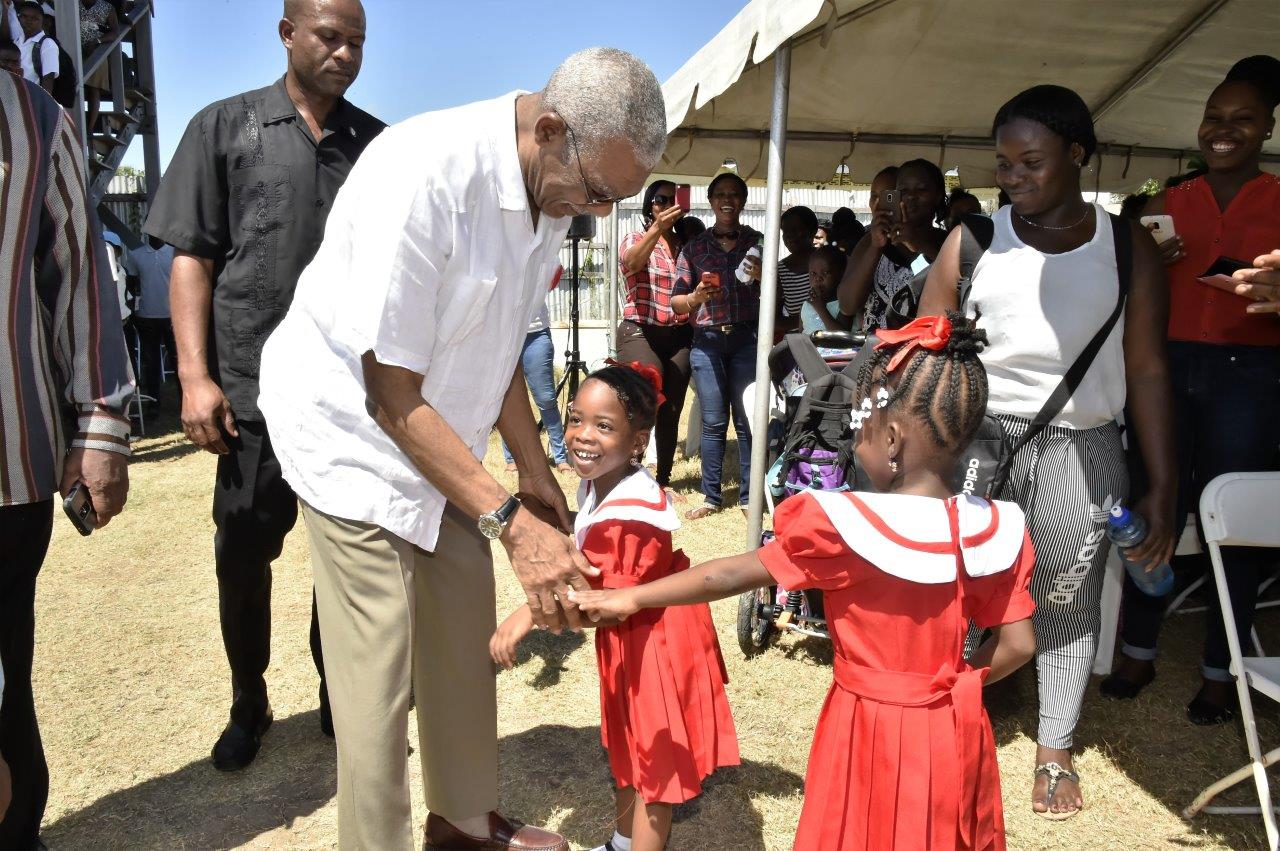 These girls were very eager to meet President David Granger, when he arrived at the Lady Sendall Park.

“Victoria produced everything people needed to eat. They did it before and it must do it again. Every household maintained kitchen gardens for green vegetables. Farms in the back-dam produced fruit, ground provisions and plantains and farmers sold their produce at a vibrant village market. Micro-businesses such as bakeries, clothing stores, retail shops and parlours proliferated. Cottage industries produced drinking chocolate and households made sugar-cake, black-pudding, souse, mabi (mauby) and other beverages for sale. Artisans, blacksmiths, tinsmiths, contractors and carpenters built and maintained bridges, houses, kokers and other minor public works. One hundred and twenty years ago you had a thriving economy… Vibrant village economies are essential to the survival of the country as a whole and have to be resuscitated,” the President said. 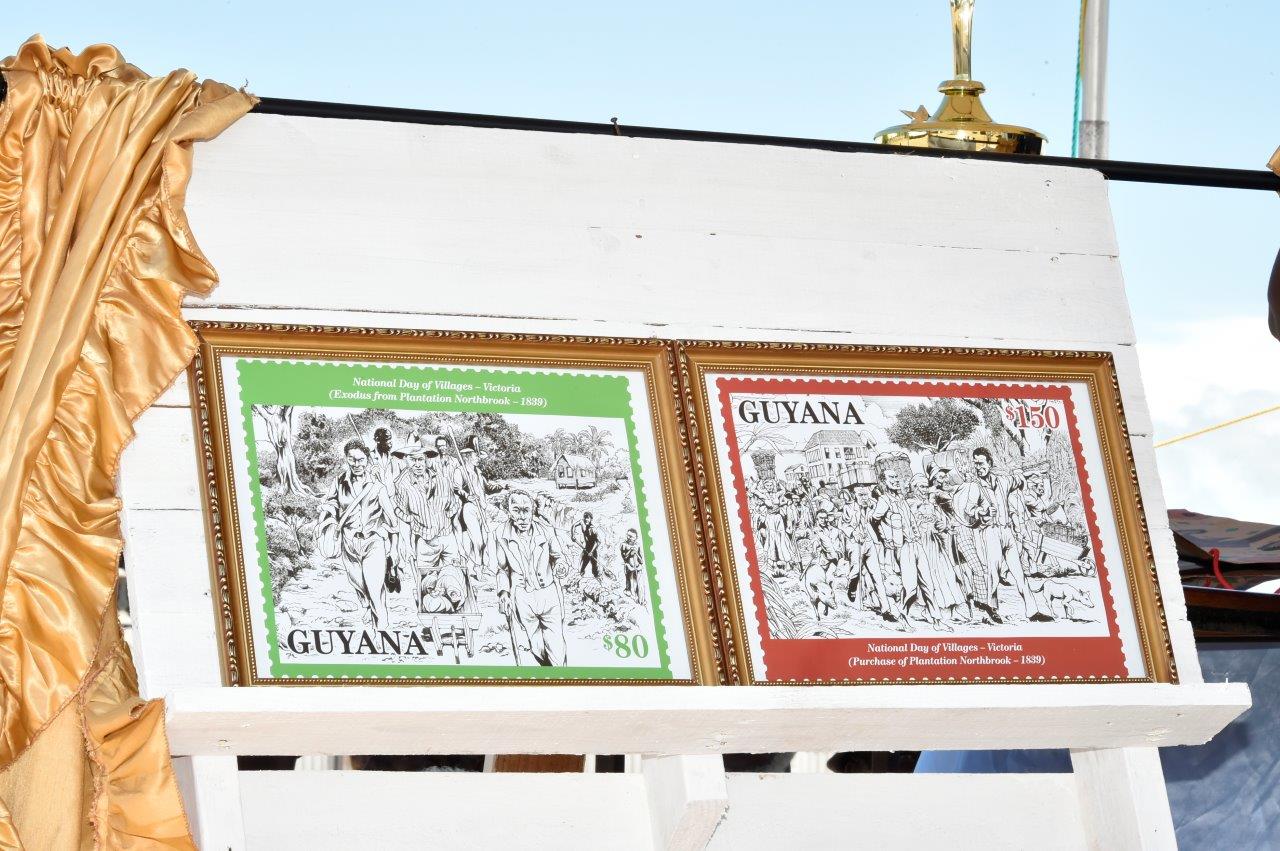 The Village Stamps, which were unveiled by the Village and the Guyana Post Office, today, at the Lady Sendall Park, Victoria Village, in observance of the National Day of Villages.

The freed slaves and indentured immigrants, who established villages were pioneers, he said. Even though they were considered illiterate and poor, they developed systems, which not only worked for them, but also paved the way for successful village economies.

“The villagers had to develop skills to build their homes and buildings. Within a few years of Victoria’s purchase, we started to see real development and one of those reasons for development, was their covenant was entitled: “Agreement Entered into by the Following Persons in the Name and on Behalf of Themselves and the Other Proprietors of Victoria Village for the Good Regulation and General Benefit of Said Estate,” he said. 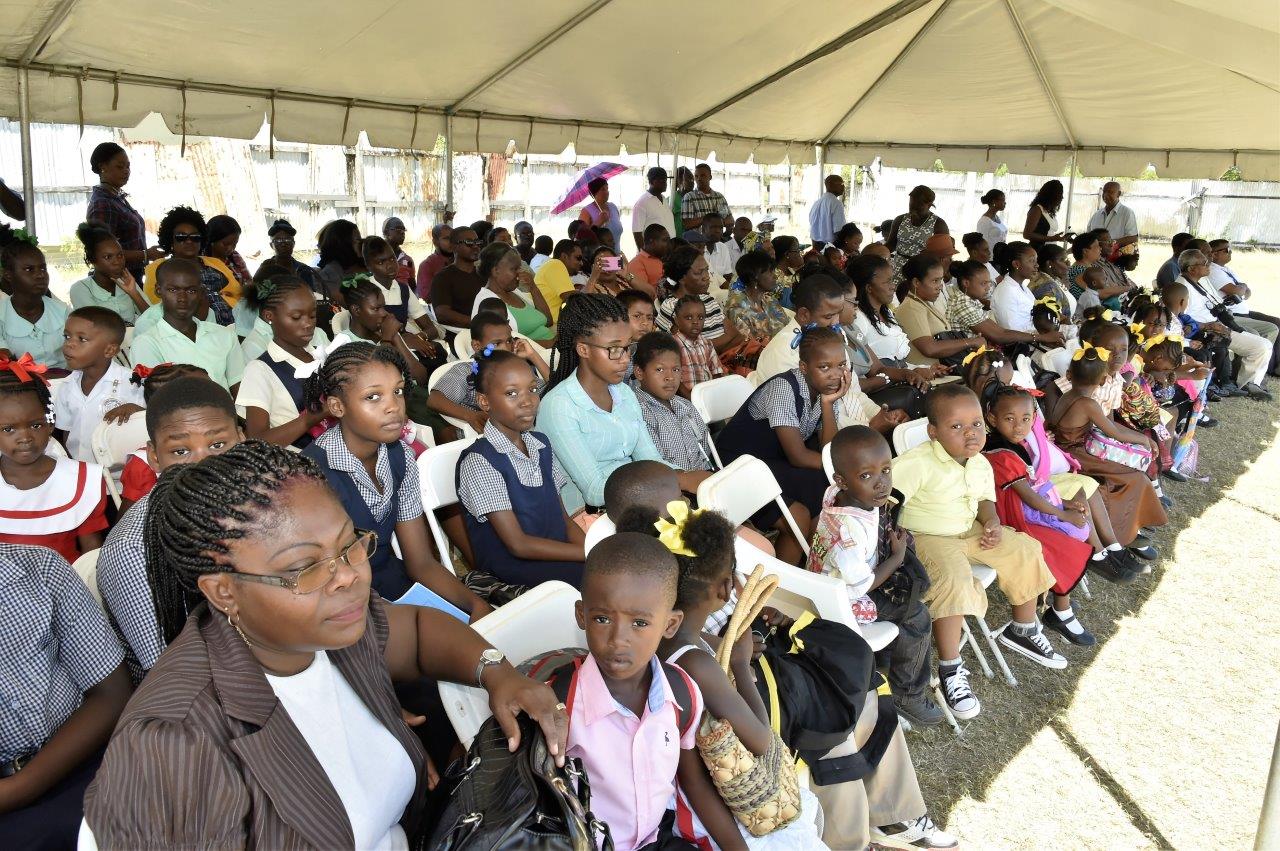 Villagers turned out in their numbers at the Lady Sendall Park, Victoria Village for the National Day of Villages celebrations earlier today.

Meanwhile, the President said that as Guyanese celebrate National Day of Villages, it recognises a movement, which began 177 years ago with the purchase of a single plantation; Northbrook, now known as Victoria Village. The day, he said, is a reaffirmation of the Government’s confidence in the centrality of villages to the future of the nation, which should enjoin every Guyanese with the responsibility to revitalise all of the villages for posterity.

“The village movement was the cradle of our nation, the crib in which our nation took comfort. It was the crucible of our development, the real manifestation of emancipation. The village movement resulted in the transformation of the landscape from a string of plantations into a series of human habitations allowing the establishment of other villages by other immigrants. The village was the whole world for our early peasantry. Village life rested securely on the four pillars of the Church; the family, home, the farm (or workshop or workplace) and the primary school… Northbrook was the incubation of a nation. It is like our nation was born when Northbrook was bought and that is why I call Victoria the mother of all villages. It is the first village on the coastland, is a landmark – a monument to the ideal of human freedom, which our forefathers fought for. The real movement started here. This is something your forefathers, illiterate people, poor folk, decided was their pathway to freedom,” the President said.

Further, the Head of State noted that National Day of Villages is about the future. “It recognises our common heritage. It acknowledges the value of the precious gift, which has been passed on from generation to generation for 177 years. It admits that we are merely trustees of this rich legacy, which we must bequeath to the next generation. Guyana is fortunate to have had fore-parents who had the percipience to provide for their progeny by purchasing plantations as places to live work and worship. I pray that we preserve our patrimony for posterity,” he said.

Meanwhile, Minister of Communities, Mr. Ronald Bulkan, remarked that today is a proud day for the villages across the country, particularly Victoria as it celebrates the sacrifices and offers reflection on the work, which had been done by the ancestors of the land.

“Today we are in the proud village of Victoria. It is not by accident that this commemoration is being held here in Victoria, but out of respect for Victoria being the first village to be established in our country some 177 years ago. That sale so many years ago paved the way for the local government system in which villagers were administered by the purchasers themselves, persons who made the rules, persons who regulated their own lives,” he said.

Chairman of the Board of Directors of the Guyana Post Office Corporation, Pastor Raphael Massiah, minutes after unveiling two stamps titled “The Exodus” and “The Purchase” to mark the National Day of Villages, remarked on the tradition of self sufficiency and cooperation that defined their early efforts to develop a thriving village economy.

“Those Africans who were enslaved, were not only enslaved by stocks and barns, but they were debarred from entering activities in the economy. Even though they had money, they could not have paper money or dollar. I believe the highest form of Government is self-government and these pioneers demonstrated self-government. Even though they were debarred from activities and the official financing system, they found a way to save their coins and they did the improbable, when the time was ripe for lands to be purchased, they were ready with coins, which was legal tender to purchase. This generation owe those pioneers a debt of duty to ensure that …the villages should never go under,” he said.

In addition, Mr. Brian Smith, a resident of the village, in an invited comment, said that he was pleased that after many years, the village and its contributions to the country were being celebrated. “Today is an amazing and historical day. Victoria has moved a far way. I am proud to say that I am happy to be participating in these celebrations today, since it is the first village to be bought by our fore fathers. It has quite an amazing history and it is good to know that the leadership of this country and our President can acknowledge the villages across this country,” he said.

Victoria, he added, has made significant contributions in the field of agriculture and it is his wish, like the President, that Victoria can rise again to reclaim that fame.

Mrs. Josephine Collins, said that she was happy that after such a long time, the villages across the country, particularly, the village of Victoria, were being celebrated and given their due recognition since it has contributed to the development of the country. “Victoria has contributed a lot to this country. We have produced a lot of persons who hold various offices, from the top down and so we have played our part,” she said.

Attendees were treated to various pieces of cultural performances, the ‘ringing of the bells’ and the unveiling of the two stamps designed in honour of the occasion, which will be available at any of the GPO’s branches at the cost of $1000.