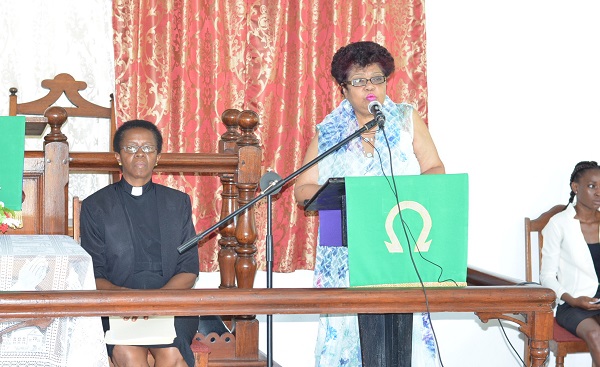 Georgetown, Guyana – (October 30, 2016) Minister of Social Cohesion, Ms. Amna Ally said that religious organisations can play an integral role in fostering social cohesion in their communities and committed to providing technical and other support through her Ministry for such initiatives, today, at the joint service celebration of Guyana’s Golden Jubilee hosted at the Mocha/Arcadia Methodist Church.

“You have a role to play in helping to build a unified Guyana… Social cohesion is the willingness of members of a society to cooperate with each other in order to survive and prosper,” the Minister told the congregation. She noted that there are many ways in which the church could contribute to social cohesion in their communities by working together and championing initiatives that bring people together.

The Minister used the opportunity to recommend inter-cultural understanding programme development, community festivals and projects. “We have to proclaim the right to differ, and eliminate discrimination…little acts in the community can make a difference,” she said.

The Minister said that she is willing to make available technical and other support to the Ministry to help to organise these initiatives. “Sometimes the church has to be sensitive to the needs of the community; look around the community and identify ways in which cohesion can be fostered,” she said.

Minister of Social Cohesion, Ms. Amna Ally said that her Ministry is willing to provide assistance to churches in the Mocha/Arcadia community in order to help host programmes that would foster social cohesion in the area

Minister Ally also use the opportunity to highlight the work of the Ministry speaking on on-going Consultations, which will contribute to the 2017-2021 National Strategy on Social Cohesion in Guyana, as well as the Diversity Education and Inclusion Workshops, which aim to provide awareness and sensitivity about behaviours that contribute to building better relations between individuals in the community.

The Minister stated that she admired the congregation as they take their civic and national responsibilities very seriously. She noted that while most of the country’s Jubilee celebrations ended in May, it is commendable that the church chose to continue their observation later into the year, adding that such an important milestone should be celebrated for as long as one chooses.

The service was one of many joint services hosted countrywide by the Methodist Church in the Caribbean and the Americas in honour of this occasion.