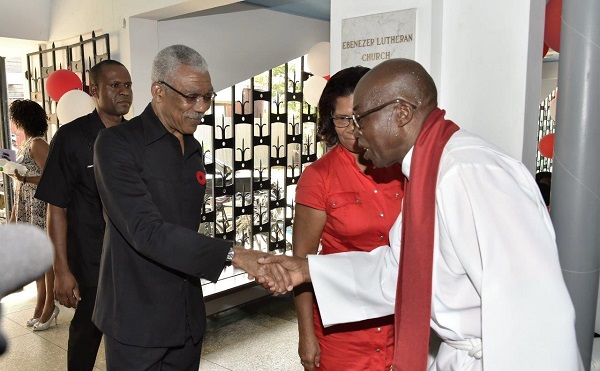 Georgetown, Guyana – (October 30, 2016) President David Granger, this morning, joined the congregation of the Ebenezer Lutheran Church in New Amsterdam, East Berbice-Corentyne (Region Six) to celebrate the quincentenary of the Evangelical Lutheran Church in the World or ‘Reformation Sunday’.

In extending congratulations to the leaders and members of the Church, the President said that the Church must be commended for its longevity and the continuity of its work in Guyana, including its work in educating the nation’s children.

“The Lutheran Church’s expansion of membership from 1875 marked a period of acculturation. There are, today, 14 parishes and more than 50 congregations in Demerara and Berbice. I wish all success to the activities that the Church will launch, in the coming 12 months, to commemorate the commencement of the Protestant Reformation. I encourage … the Church to continue to be dedicated to its mission of promoting religious understanding during the coming year,” President Granger said.

President David Granger is welcomed by Reverend Leroy Nicholson, President, Evangelical Lutheran Church of Guyana, upon his arrival this morning. 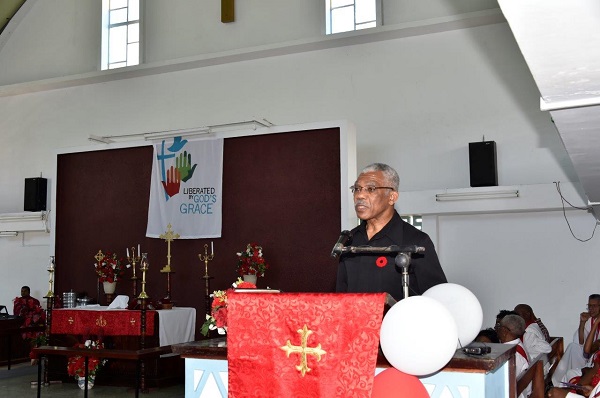 The Protestant Reformation was a movement which was triggered when Martin Luther challenged the Roman Catholic Church on its Indulgences, using the power of the press to spread his ideas, causing an upheaval in the Catholic Church. Speaking from a historical point of view, the President said that Martin Luther, on 31st October 1517, nailed one of his 95 theses, ‘The Power and Efficacy of Indulgences’ on the door of the Castle Church in Wittenberg, Saxony in Germany. Martin Luther’s courageous act, he said, though seemingly simple at first, engendered the most significant change in Christian doctrine since the crucifixion of Jesus Christ.

“It triggered a religious upheaval, known as the Protestant Reformation, throughout all of Europe and the world. The Protestant Reformation challenged Roman Catholic orthodoxy. Branches of Christianity developed in the form of new churches, religious organisations and sects. The religious map of Europe was redrawn. Countries of the South, more or less, remained within the Roman Catholic domain. Many of those of the North became part of the “reformed’ churches. The Protestant Reformation is the mother of the Evangelical Lutheran Church of Guyana. It is the oldest Church in Guyana. The Dutch planter class introduced the Church here in October 1743, 273 years ago,” he said. 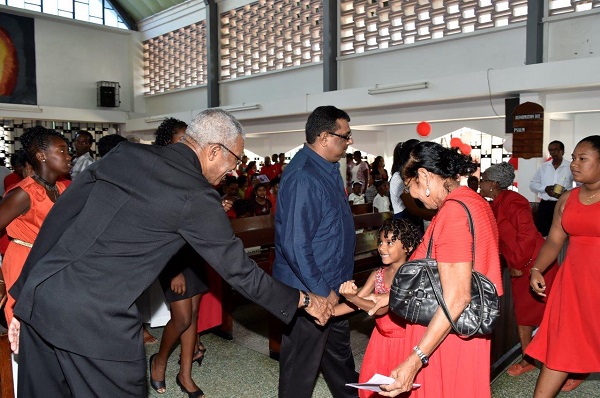 President David Granger greets a young worshipper at the Ebenezer Lutheran Church this morning, during the quincentenary observances.

The 1763 Berbice Revolt of enslaved Africans led to the Church being relocated to New Amsterdam, which has remained the home of Lutheranism in Guyana.

Meanwhile, Regional Chairman Mr. David Armogan remarked that this auspicious occasion must be celebrated since the Church has made significant contributions to the development of the country. “Lutherans in Guyana have played an important role in Guyana over the years as the President said, in education. Your church has worked very closely in many communities of our country, especially among the poor and depressed communities bringing hope to many people who would have lost hope and bring faith where faith is not present. Continue to do the good work that you have been doing in our country,” he said. 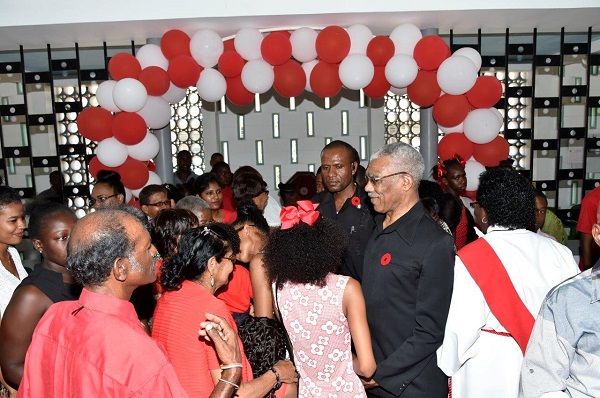 President David Granger interacting with some of the members of the congregation of the Ebenezer Lutheran Church, during the ‘Reformation Sunday’ service, earlier today, in New Amsterdam.