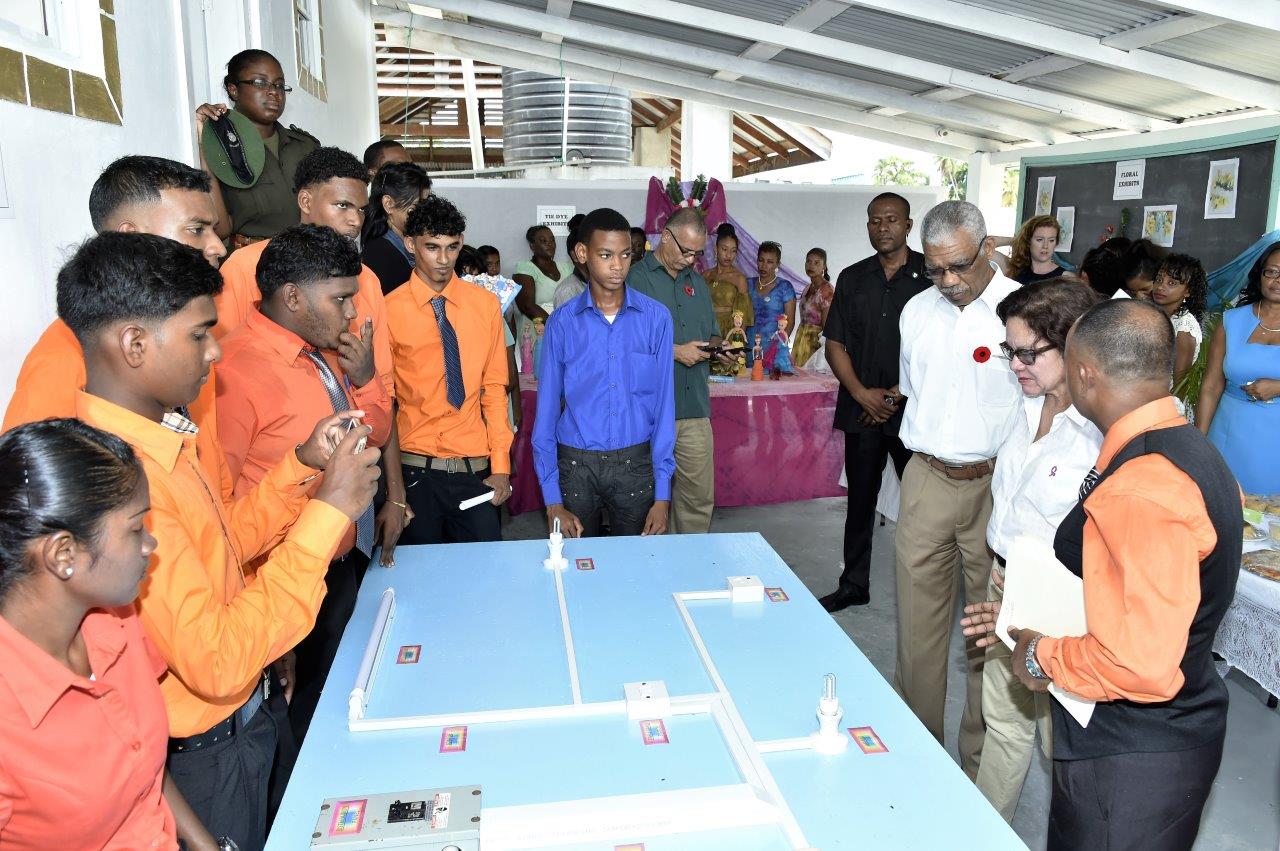 The Centre, the first of its kind to be established by the Foundation, offers counselling, skills training and support to individuals and families across the Coast.
In her feature address at the official opening ceremony, the First Lady said that it is a proud moment for the Foundation and for the people of Essequibo. She also said that it was felicitous that the Centre is opening as Guyana is celebrating Diwali – the Hindu festival of lights, which spiritually signifies the triumph of good over evil and the renewal of hope – as it will help to foster a new beginning for many persons in the Cinderella County.

“The name itself reflects the thought and planning which went into this Centre. The Guyana Foundation recognised a need and was determined to develop a holistic approach to address the issues which had been identified. These included depression and hopelessness, joblessness, and the need for empowerment of women and young people. What we have seen here is a sunrise – the symbolic dawn of a new day here on the Essequibo Coast. This is a day on which people can wake up to the promise of a difference in their lives. They know that regardless of gender, race, age, or religion, they can come to this Centre to meet their peers or seek counselling. They can share their thoughts and feelings about the things that affect their daily lives and perhaps, find the solution to some of [them],” Mrs. Granger said.

President David Granger and First Lady, Mrs. Sandra Granger listen closely as Mr. Raj, the instructor of the Electrical Installation Course, explains some of the main features of the programme.

Although it was officially commissioned today, 34 persons have already graduated from skills training programmes such as catering, floral arrangement, electrical installation, tie dye and batik designing and doll making. “This Centre; your Centre, has already begun to make its mark in the communities it serves. The Public Hospital at Suddie is referring clients for counselling and this Centre assists persons whose ages range from under 18 to over 66 years old. It has facilitated two Gaining Opportunities and Living Skills (GOALS) Workshops at the Centre itself. The Foundation, throughout its relatively short life, has been providing material and other support to communities needing such assistance in several areas of our country. This Sunrise Centre underlines its commitment to its vision and its mission, which were clearly stated when it was formally established in January 2013,” the First Lady said.

Meanwhile, Mrs. Supriya Singh-Bodden, founder of The Guyana Foundation, noted that the Sunrise Centre is part of the Foundation’s ongoing efforts to provide urgently needed services that will afford persons a better quality of life. The Centre has even secured a market in the Grand Cayman for the products which are produced in the fabric designing class, she said. “A three month pilot phase was successfully completed recently and orders have already been secured from a leading fashion house in the Cayman Islands to purchase all pieces prepared by the design course,” she said. 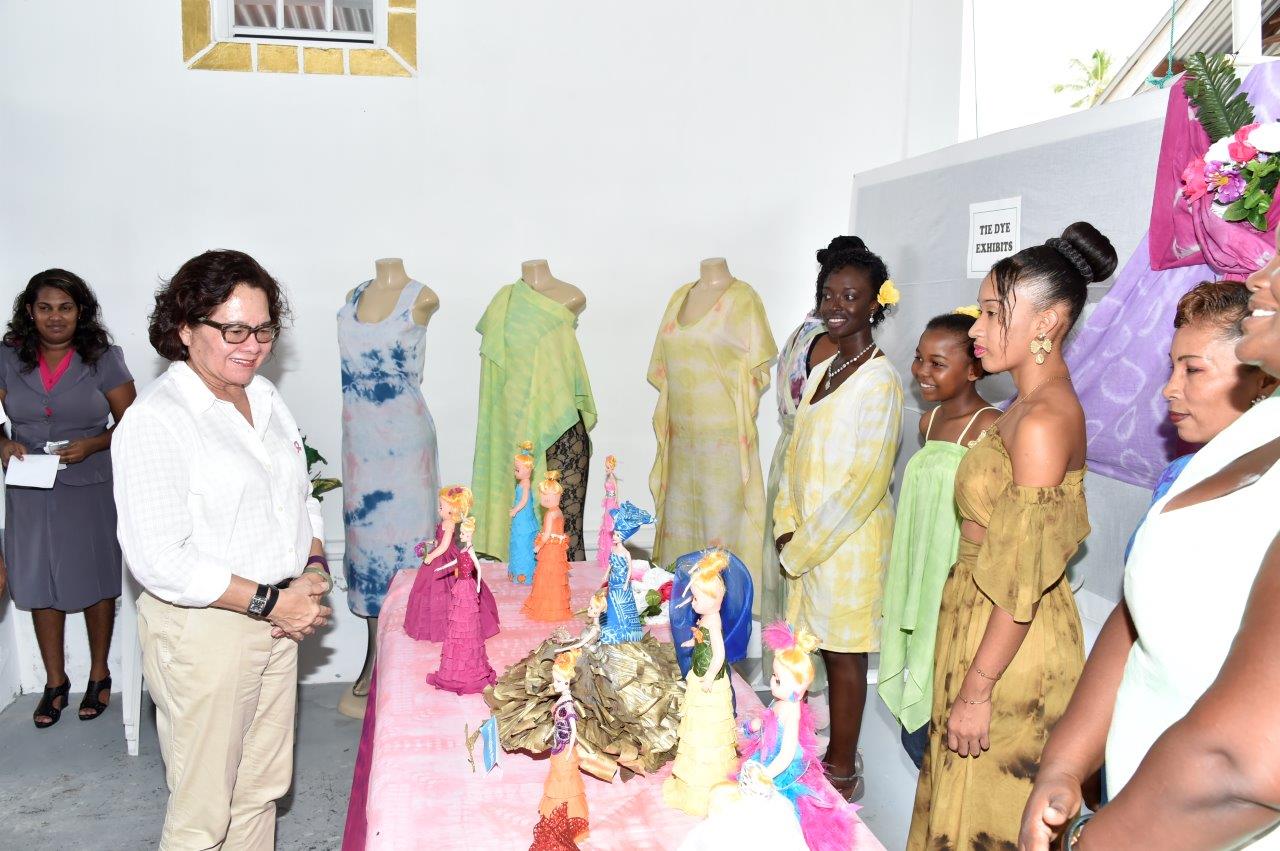 First Lady, Mrs. Sandra Granger admires some of the decorative dolls created by participants in one of the Sunrise Centre’s skills training programmes, while some of the representatives display clothing made from tie dye and batik designing techniques.

Mrs. Singh-Bodden further noted that 80 per cent of the focus of The Guyana Foundation’s work programme will now be directed to the Centre and establishing similar hubs across the country.

Most of the facilitators and mental health counsellors attached to the Centre hail from the community itself, in keeping with the Foundation’s vision for the Centre to be grassroots-based and staffed by individuals who understand the challenges in the nearby communities.

Graduates from several of the skills training programmes have said that the Centre has given them a new lease of life and that they are optimistic about their job prospects. Mr. Kevin Gangoo, who graduated from the electrical installation class, said, “It was a gift, that after enrolling here, that we got the ideas, knowledge and experience that we need. I want to thank the Foundation for thinking about Essequibo and giving us this programme here”.