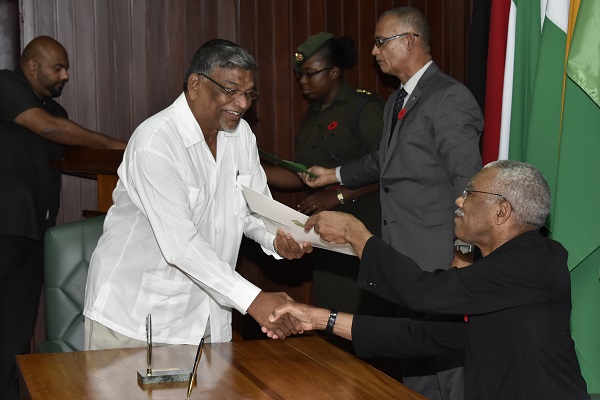 Georgetown, Guyana – (October 28, 2016) The members of the Public Procurement Commission (PPC), who were sworn in by President David Granger, earlier today, have been charged to uphold the sacrosanct tenets of the Constitution and to be independent, impartial and fair in the execution of their duties.

Delivering the charge to the new members, President Granger said that the Constitution of the land mandates that a Public Procurement Commission be established. The Constitution, he noted, is sacrosanct and its provisions, therefore, must be observed and applied scrupulously.

“The Government of Guyana iterates its commitment to the principles of accountability and transparency in the conduct of public business. The establishment of the Commission evinces the importance of ensuring equity and fairness in public procurement. I congratulate you –the members the members of the Public Procurement Commission – and urge you all to be faithful to the oath you have just sworn. I charge you with upholding the constitutional duty of the Public Procurement Commission in being independent, impartial and fair,” he said.

The President said that the Public Accounts Committee of the National Assembly was responsible for the selection of the members of this Commission and this bi-partisan process of selection is a demonstration that, however intractable political differences might seem, the bases for political agreement and consensus on matters of national interest should always be sought.

Meanwhile, Vice President and Minister of Public Security, Mr. Khemraj Ramjattan, in an invited comment, said that it is a happy day for the Government and the people of Guyana, since the Public Procurement Commission is one of the campaign promises of the coalition Government. After more than a decade of being inactive, the Minister said that it is an accomplishment to be able to have the PPC up and running.

“This is one of our biggest lobbying points to get proper accountability in this country and I am so proud that it has happened in the first half of our term after waiting for more than a decade,” he said.

This establishment of the PPC will now clear the way for the approval of the award of contracts to be handled by that body instead of the Cabinet. Minister Ramjattan said that this will ensure that there is more transparency and accountability to the Guyanese people. “It will be a big plus for governance in this country and it is of course keeping with the Constitution of Guyana,” he said.

Mr. Nanda Gopaul, in an invited comment, said that he is happy with the confidence, which has been reposed in him and the other members of the Commission by the Parliament and the Government as a whole.

He noted that the Commission will work to ensure that its integrity and the interests of the Guyanese people are priority in every decision that is taken.

Remarks by President David Granger at the reception to mark the 206 th Independence Anniversary of the United Mexican States, held at the Marriott Hotel on 15 th September, 2016