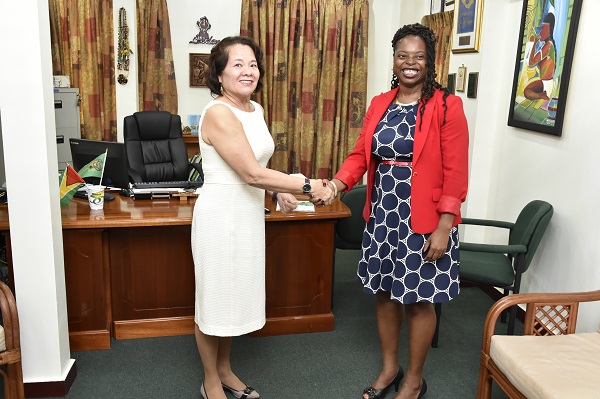 Georgetown, Guyana – (October 27, 2016) First Lady, Mrs. Sandra Granger, yesterday, met with Mrs. Stacey Mollison, President of the Libra Management Group, which is based in Georgia, United States of America, to explore the possibilities of collaboration, particularly in the area of Science, Technology, Engineering and Mathematics (STEM) education and women’s development.

During the meeting, which was held at the Office of the First Lady at State House, they also discussed other possible areas of partnership, including on the First Lady’s Self Reliance and Success in Business Workshop for women.

Mrs. Granger, in an invited comment, said that while it is an exploratory meeting, she expects that in time to come, future partnership may be possible.

“I think that we are always open to exchanges of information and support and Ms. Mollison has expressed her interest in participating in STEM, which is now beginning to catch on in Guyana and is creating or generating quite a bit of excitement among our younger people. So we are hoping that once we find the resources and we have our plans in place we can take STEM throughout the country and expose all of our kids to the possibilities of knowledge and information in STEM and how we can use that for personal development as well as the development of the country. I think if we establish clear and equitable partnerships we can achieve a lot,” Mrs. Granger said.

The First Lady noted that she expects that within the next few months, tangible efforts will be made to ensure that a partnership is developed for the good of all involved.

Meanwhile, in an invited comment, Mrs. Mollison said that she was most impressed with the work that the First Lady has undertaken over the past few months and as such she decided that it was time to get on board and offer her support.

“I am very excited. I had the opportunity to review some of the First Lady’s projects and interests in women entrepreneurship and I was intrigued at how I can get involved in the process of empowering women in the business sector. I came [to] talk with the First Lady to see how I can give back to my homeland and what I can do to provide any support or resources to help with empowering women,” she said.

Both the First Lady and Mrs. Mollison are pleased about the opportunities that the STEM programme has introduced to young people in several villages across the country.

Mrs. Mollison was accompanied by Mr. Lindsay Simon and Mr. Alain Mark Simon, both of the same organisation.