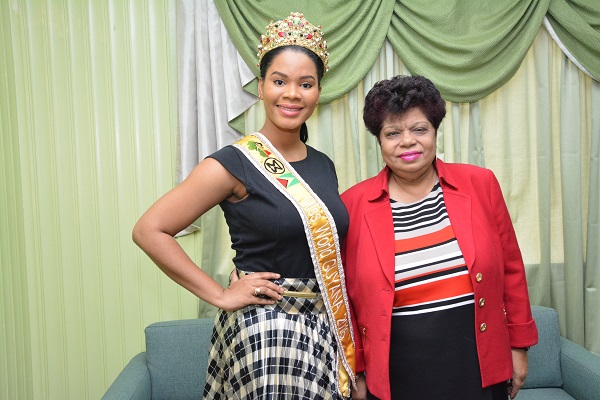 Georgetown, Guyana – (October 21, 2016) Minister of Social Cohesion, Ms. Amna Ally, today, invited Miss World Guyana 2016, Ms. Nuriyyih Gerrard to partner with her to foster social cohesion on her return from the upcoming Miss World pageant, during a courtesy call at her office at the Ministry of the Presidency.

During the visit, Ms. Gerrard informed the Minister about the steps that she has taken to advance her ‘Beauty with a Purpose’ platform that focuses on mental health in Guyana through a campaign titled ‘Thrive! Live without stigma’. These include creating linkages with the Ministry of Health and the National Psychiatric Hospital to ensure that young people can access mental health services and using her experience in theatre arts to promote a series of ‘One Act’ skits to reach those who may be suffering.

Minister Ally said she was pleased that the beauty ambassador has taken this step as her Ministry has found merit “in working together to bridge gaps” to resolve some of the social challenges in Guyana.

“I like the concept of working together [and] I am very happy that you are focusing on your platform … because if we can have some relief in those areas I think definitely we are going to become a better country,” Minister Ally said.

Ms. Gerrard also said that she has founded a non-governmental organisation called One Act Foundation, which is aimed primarily at promoting mental health in children. In addition, she said, “We are currently working along with some app developers in India to develop a mental health application so young people could have ready access to resources, whether it’s just literature on mental health… or actual contact with mental health professionals.”

Minister Ally commended Ms. Gerrard on her initiative and noted that public persons who use their platform to promote mental health will help to reduce some of the stigma attached to this disease, particularly in the wake of the instances of suicide cases in Guyana. She also noted that Ms. Gerrard’s experience in theatre arts would be a boon to her social cohesion projects and invited her to partner with her Ministry in this endeavour.

Minister Ally also extended best wishes to Ms. Gerrard, noting that she is beautiful, eloquent and has a likeable personality and as such she is confident that she will do well on the international stage and make Guyana proud.

Citizens’ Report article inaccurate -Ministry of the Presidency calls for a retraction, correction