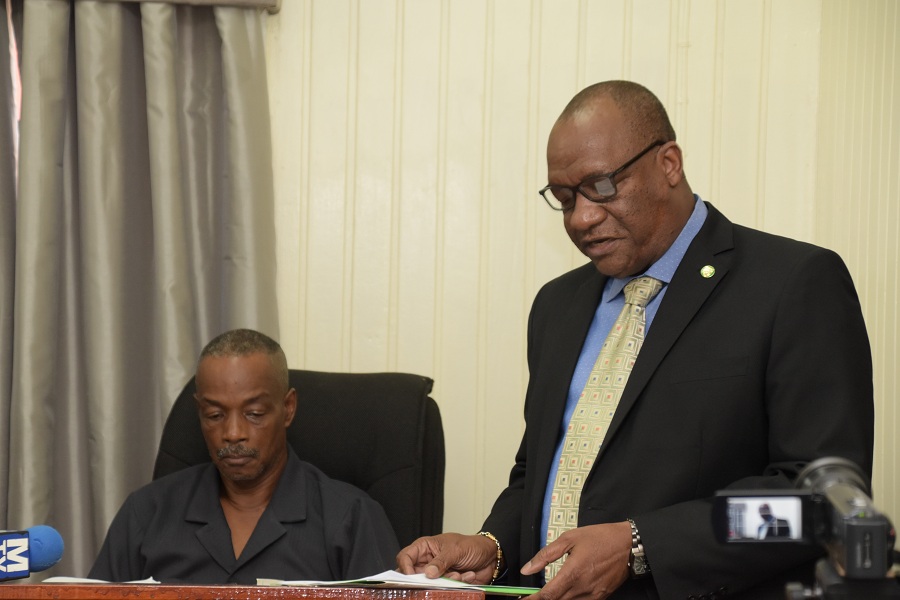 Georgetown, Guyana – (October 17, 2016) Minister of State, Mr. Joseph Harmon, today, received the Preliminary Report from the Commission of Inquiry, which was established to probe the discovery of an aircraft near the village of Yupukari, Upper Essequibo-Upper Takutu on September 13, 2016. The Report was handed over by Brigadier (Ret’d) Edward Collins at the Ministry of the Presidency.

Brigadier Collins, who was commissioned to investigate, examine, advise and report on the circumstances under which the foreign aircraft, was discovered on September 13, 2016, entered into the country, said that investigations, up to this point, have revealed that the aircraft originated from Colombia, with its destination being Guyana.

“The aircraft was discovered by the Joint Service on September [13] but it was in that location long before that. There is enough evidence to suggest that the aircraft came from Colombia and was on its way to Guyana. It developed engine problems and the pilots had a requirement to conduct a certain manoeuver in order not to lose consciousness and when they got to Guyana, because the aircraft could not start, it remained there for a while. We have evidence to suggest that the residents found that site by August 18, 2016,” he noted.

The Commissioner noted that during the investigations, it was also discovered that the residents were not forthcoming with the provision information with security forces and that it is likely that recommendations will include the development of betters relations and communication between the security sector and members of communities in those areas. “All of the Toshaos were interviewed and I do not know why they were unwilling to provide the information they had to the security forces. I can only assume that based on the evidence that I have received so far, that the relationship between the villages and the security forces is not as [we would have] expected,” he said.

Concurrent to the COI, a the Joint Services team, headed by Superintendent Hugh Denheart of the Guyana Police Force, is conducting investigations and which will pursue and probe the areas beyond the scope of the Terms of Reference of the Commission. The final report of the Commission will be presented on November 16, 2016.

Minister Harmon, who received the report, expressed Government’s gratitude for the work, which has been completed so far, even as he noted that the administration looks forward to the final document and its findings and recommendations.

“I expect that within the time left for the completion of the final report that we would be able to present it to His Excellency so I want to thank you for this Report and to urge you to continue at the same pace at which you have gone ahead in producing this Preliminary Report. We look forward to the final report when its gets here as well as the recommendations to improving the communication in the hinterland and our borders and the timeliness of that information [being transmitted] to the centre where the decisions have to be made…,” Minister Harmon said.

The plane, bearing registration number N767Z, was first brought to the attention of officials on Tuesday, September 13, 2016 by a resident of the area. The following day, Wednesday, September 14, a Joint Army and Police team, inclusive of CANU, were dispatched to the location to conduct investigations.