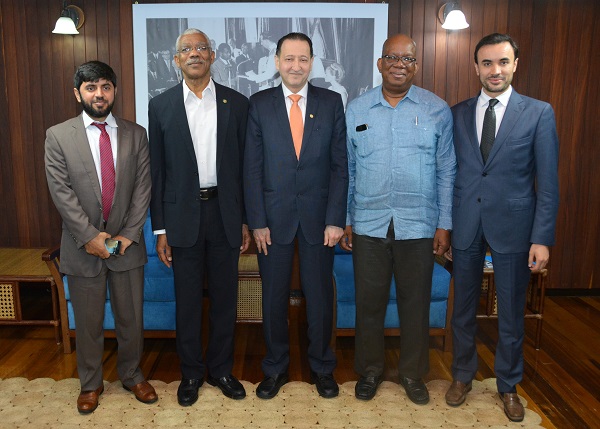 Georgetown, Guyana – (October 14, 2016) President David Granger, this morning, met with officials from the Islamic Development Bank (IDB), who are currently in Guyana on their first official visit since the country became a full member of the Bank in April, earlier this year. Minister of Finance, Mr. Winston Jordan was also present at the meeting, which took place at the Ministry of the Presidency.

President Granger said that the decision to become a full member of the IDB is one which was long-overdue and that his Administration has a clear vision on how it wants to proceed and the kind of development projects it would like to embark on through this partnership. He explained that while the wider Caribbean is known for tourism, Guyana, with its pristine forests and tremendous untapped and undiscovered potential, is a new frontier for development.

“We see ourselves as a bridge between the insular Caribbean and the Continent… We are strategically placed, but there is always a question about infrastructure. We have not been able to develop highways to much of our hinterland communities and it is in the hinterland that we have our richest resources,” the Head of State said. He spoke about major projects in which the IDB can be involved, such as the bridging of the Essequibo River and the establishment of the Sovereign Wealth Fund.

Meanwhile, Mr. Alsaati said that the Bank intends to work with the Ministry of Finance and other stakeholders in the public and private sectors to develop a medium-term (three to five years) strategy to identify areas in which it can add value and make a positive impact. He said that they are specifically looking at areas such as capacity-building, transportation, energy, information technology, health care, agriculture and infrastructure.

He also informed in the coming weeks, technical teams will be coming to Guyana to look at high-priority, emergency projects, which can commence in 2017.

The IDB was established in December 1973 and officially opened its doors for business on October 20, 1975, with Headquarters in the Kingdom of Saudi Arabia. It also operates through regional offices in Kazakhstan, Senegal, Malaysia and the Kingdom of Morocco. Guyana is the 57th country to become a member of the Bank with one in Latin America, 27 in Africa, two in Europe and 26 in Asia. Suriname is the only other CARICOM State that is also a member.