‘Be inspired by the extraordinary lives of ordinary people’ -First Lady, at Annual Women’s Day Service 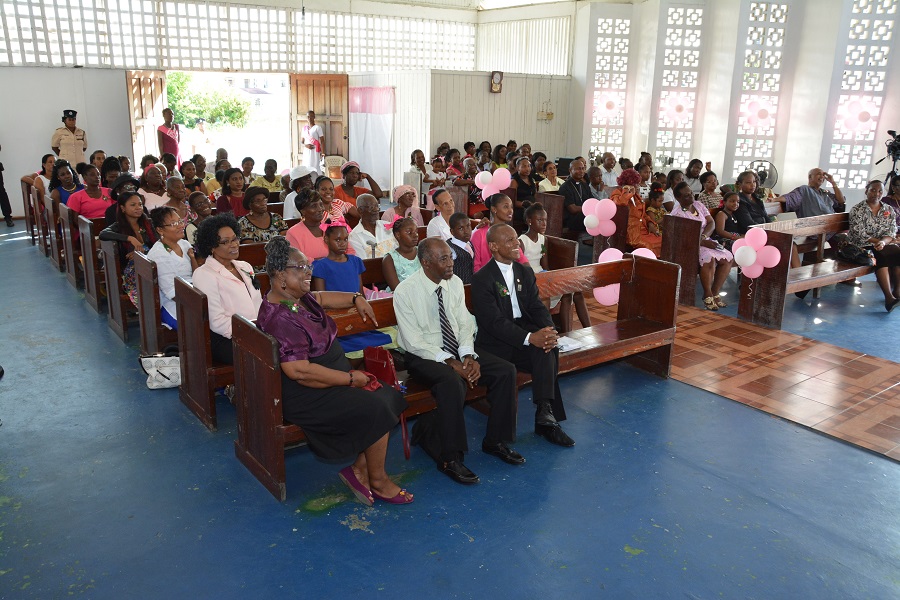 Georgetown, Guyana – (October 9, 2016) First Lady, Mrs. Sandra Granger, yesterday, told the congregation at the Annual Women’s Day Service for members of the Franklin Talbot Memorial African Methodist Episcopal Church in North Ruimveldt Gardens that [women] must be “inspired and strengthened by the extraordinary lives of ordinary people like us”.

Speaking on the role of women in the society, the First Lady pointed out that as mothers, wives, sisters and daughters, women shoulder a huge responsibility and must lean on a greater power. She said that women bear the task of being the tower of strength to their families, and they must be reminded that every trial they’re faced with should be a reminder of God’s will for them. “…God give us strength, support and guidance during our struggles so that we can become stronger and better persons, he empowers us for greater works,” Mrs. Granger said.

Mrs. Granger remarked on some of the challenges women are faced with at home and how easy it is for them to compare their lives with that of another woman who seems better off. “You really do not know what goes on in those homes. Domestic violence does not only happen among the poor… illness and tragedy affects us all,” Mrs. Granger said.

Additionally, Mrs. Granger urged the women to preserve their faith as biblical women did. She noted those women, who were dismissed as insignificant but yet remained steadfast in their faith. In her closing remarks she quoted Matthew 13:31 where the scripture urged the women be the fruits of their labour through their faith and perseverance. “Today, as you celebrate your Annual Women’s Day, I urge you to be like that grain of mustard seed. Let your roots grow down into the rich soils, nourished by your faith, and build your lives around him and he will empower and guide you to do greater things,” Mrs. Granger said.

The Annual Women’s Day Service, which was an all-day event, was led by Rev. Yvonne Bullen in the morning, while the afternoon session, which saw the presence of Mrs. Granger, was led by Sis. Caldetta Gibson and Rev. Andrew Morris-Grant, representative of the Franklin Talbot Memorial African Methodist Episcopal Church, to Guyana and Suriname.

Message of Condolence from His Excellency Brigadier David Granger, President and the Cabinet of Ministers of the Cooperative Republic of Guyana on the passing of Malcolm Corrica M.S.