Government in Action -The Development of Guyana’s ‘green’ agenda 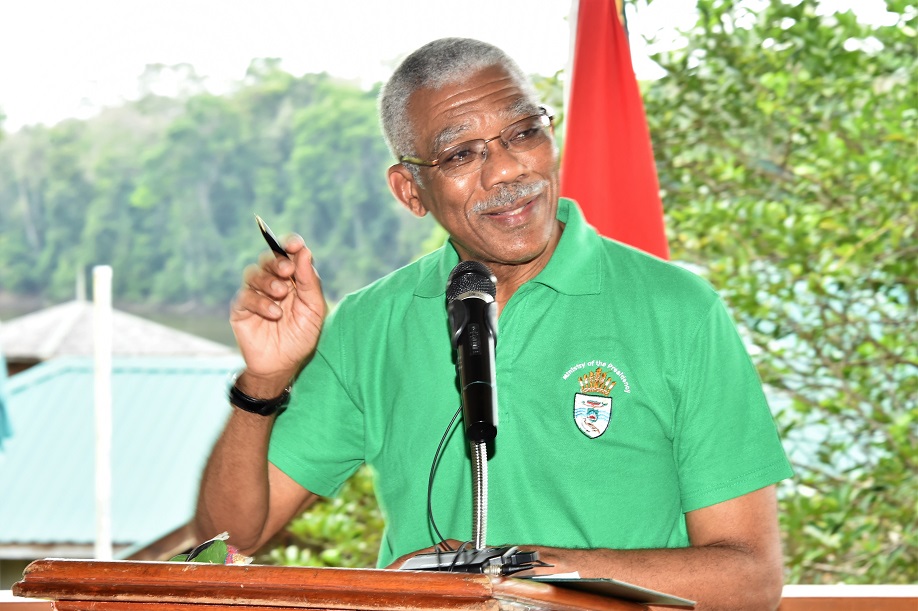 Georgetown, Guyana – (October 7, 2016) The ‘greening’ of Guyana is a goal, which forms a major part of President David Granger’s vision for the development the country. This administration is committed to balancing environmental sustainability with economic development to ensure that the national patrimony is preserved and economic advancement brings the good life for all Guyanese.

But what does a ‘green’ Agenda entail? Guyana’s forests cover over 85 percent of the country’s land mass, the second highest percentage forest cover in the world. The country is also seen as a carbon sink, with the ability to sequester more carbon than is emitted by the human activity of its population. But the country’s economy is one, which is heavily dependent on the agriculture and extractive sectors, which means that the road to a ‘green’ Guyana would entail a model that allows the sustainable use of its resources.

This model comes in the form of the Green Economy Development Strategy, which aims to transform Guyana into a state that achieves the needed balance of sustainable development. On the occasion of the opening of Guyexpo 2016 in May, the President declared it his mission to build a ‘green’ economy. “We are going to transition our economy towards a renewable, clean and cheaper source of energy. We are going to craft a comprehensive Coastal Zone Management Plan to protect human habitation; we are going to craft coastal economic systems and ecosystems. We are going to create ‘green’ enterprises and jobs and we will inculcate ‘green’ education in our schools,” he said.

The strategy involves the promotion of the sustainable exploitation of our natural resources, the establishment of a good solid waste management programme, the promotion of sustainable energy through the introduction of solar farms, wind and hydro powered electricity, the promotion of the ecological integrity of our forests and the implementation of ‘green’ technologies. The essential idea is that there must be a balance between the conservation and the exploitation of our natural resources, a balance, which President Granger has referred to as ‘walking on two legs’.

Even as Guyanan emerges as a reliable partner in the fight against climate change, the Head of State placed squarely on the international agenda, Guyana’s value as a ‘green’ state when he attended the 71st Session of the United Nations General Assembly in New York in September. During his address at one of the meetings at the Session, the Head of State noted that the global shift towards battling climate change, through moves such as the adoption of the 2030 Agenda for Sustainable Development in September 2015 and the signing of the Paris Agreement on climate change in April 2016, is one which is to be commended, adding that Guyana is part of this ‘green’ movement.

“[Guyana’s] natural assets, commitment to sustainable development, contribution to countering the adverse effects of climate change and collaboration with the international community in seeking solutions to global threats have distinguished it as an emergent ‘green’ state. It is a state that will ensure a secure future for its people in the pursuit of a ‘green’ economy. It is one that is proud of its place as a reliable and cooperative partner in international efforts to protect the earth’s environment,” the President said.

In fact, Guyana’s pledge for a ‘green’ economy began in 1989 through its grant of 371,000 hectares of forests to be used as an international model for the promotion of the conservation and the sustainable and equitable use of tropical rain forests in a manner that will lead to lasting ecological, economic and social benefits to the people of Guyana and the wider world.

This generous grant is known as the Iwokrama International Centre for Rainforest Conservation and Development (Iwokrama), which is located in the very heart of the country. The President has referred to Iwokrama as a prime example of what Guyana has to offer the world in the fight against climate change.

At a commemorative tree planting ceremony at Iwokrama in honour of National Tree Day at the beginning of October, the President, in his address highlighted the vast potential of Guyana’s biodiversity, as can be seen through the shining of the centre and its protected forests.

Guyana’s agreement with the Kingdom of Norway also serves as testament to its commitment to sustainable development and environmental conservation. The Reducing Emissions from Deforestation and Forest Degradation (REDD+) Agreement allows Guyana to demonstrate how the model can be used in a manner that will allow countries to use their forests to combat climate change. Guyana also has environmental agreements with the Kingdom of the Netherlands, the Federal Republic of Germany, the State of Japan and other states and international organisations in the areas of environmental development.

But the President has said that there focus must also be placed on the need for collective commitment by the greater part of the international community to collaborate with smaller States such as Guyana to continue their pursuit of a low-carbon, low-emission path to sustainable development and to constrain the rise in global temperatures. But even as these international partnerships continue to grow, the road to a ‘green’ economy must be lined with policies and strategies that seek to first manage the environment as a whole.

It is in this regard that the President established the Department of the Environment (DoE), which will oversee the activities of environmental compliance and management, protected areas development and management, national parks management and wildlife conservation and protection in Guyana. Headed by Advisor on Climate Change at the Ministry of the Presidency, Ms. Ndibi Schwiers, the Department will be directly responsible for the Environmental Protection Agency, Protected Areas Commission/National Parks Commission and the Wildlife Division.

Ms. Schwiers said that the environment is a complex and interrelated, unified system, but that the present assignments of various agencies operate based on their own responsibilities. As such, while the DoE will not seek to usurp the role of existing agencies, it will work to coordinate its mandate so that it can catalyse actions to improve environmental management nationally. 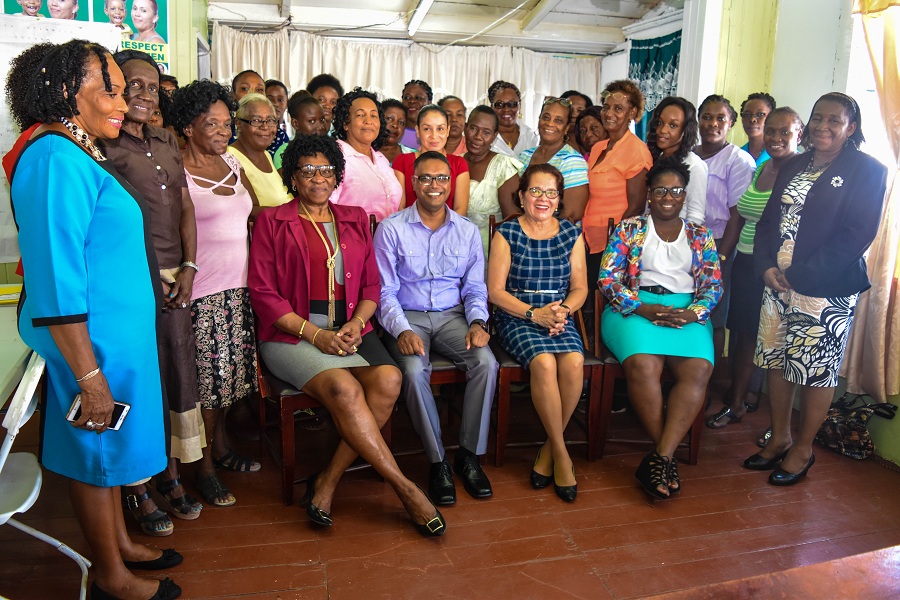 Ms. Ndibi Schwiers, Head of the Department of the Environment

The Department will also work closely with other government agencies with an environmental mandate, research agencies, the private sector, civil society and Non-Governmental Organisations (NGOs) to advance government’s ‘green’ Agenda. With its core focus centred on the development of policies and programmes that will achieve its mandate, the Department will first seek to assess what policies and programmes currently exist.

With these concomitant measures underway, the achievement of Guyana’s ‘green’ Agenda is one that is more than within the country’s reach. Most recently, Guyana was one of 197 parties to sign on the Paris Agreement on Climate Change, which focuses on the mitigation of greenhouse gas emissions, as well as adaptations and financing needed to tackle climate change beginning in the year 2020.

In keeping with the tenets of the Agreement, President Granger has pledged that Guyana will improve timber monitoring and maintain a high level of timber legality, increase value-added activities in the forestry sector so as to augment carbon storage in long-use wood products, intensify the sustainable management of our indigenous communities which own and manage 14 percent of our national territory, introduce a national Emissions Reduction Programme (ERP) to add two million hectares under conservation, encourage more efficient mining and logging activities, implement Reduced Impact Logging (RIL) and invest in solar power, wind power and hydropower to transition more rapidly to renewable sources of energy and reduce our dependence on fossil fuels.

On a social level, efforts to bring to light the importance of the move toward a ‘green’ Guyana, can be seen through initiatives such as the observance of National Tree Day. The event was launched in October 2015 by the President and also ushers in the beginning of Agriculture month.

At the inaugural event last year, President Granger highlighted that investing in a ‘green’ economy will aid in overcoming environmental degradation and economic decline and that planting trees can contribute significantly to this goal. At this year’s event, the President, accompanied by several other Ministers and stakeholders participated in tree planting exercises at the Fairview Airstrip, the People’s National Congress Headquarters at Sophia and at Iwokrama.

Minister of Agriculture, Mr. Noel Holder said that the event helps to create awareness to the use of trees in the sustenance of biodiversity. Minister of State, Mr. Joseph Harmon attended a similar activity in the compound of the Department of Public Service in Georgetown. There, the Minister explained that Guyana’s ‘green’ Strategy is an expanded version of the Low Carbon Development Strategy (LCDS) and will seek to show the world Guyana’s potential to partner with world partners to tackle climate change.

Government committed to ensuring transparency in award of contracts