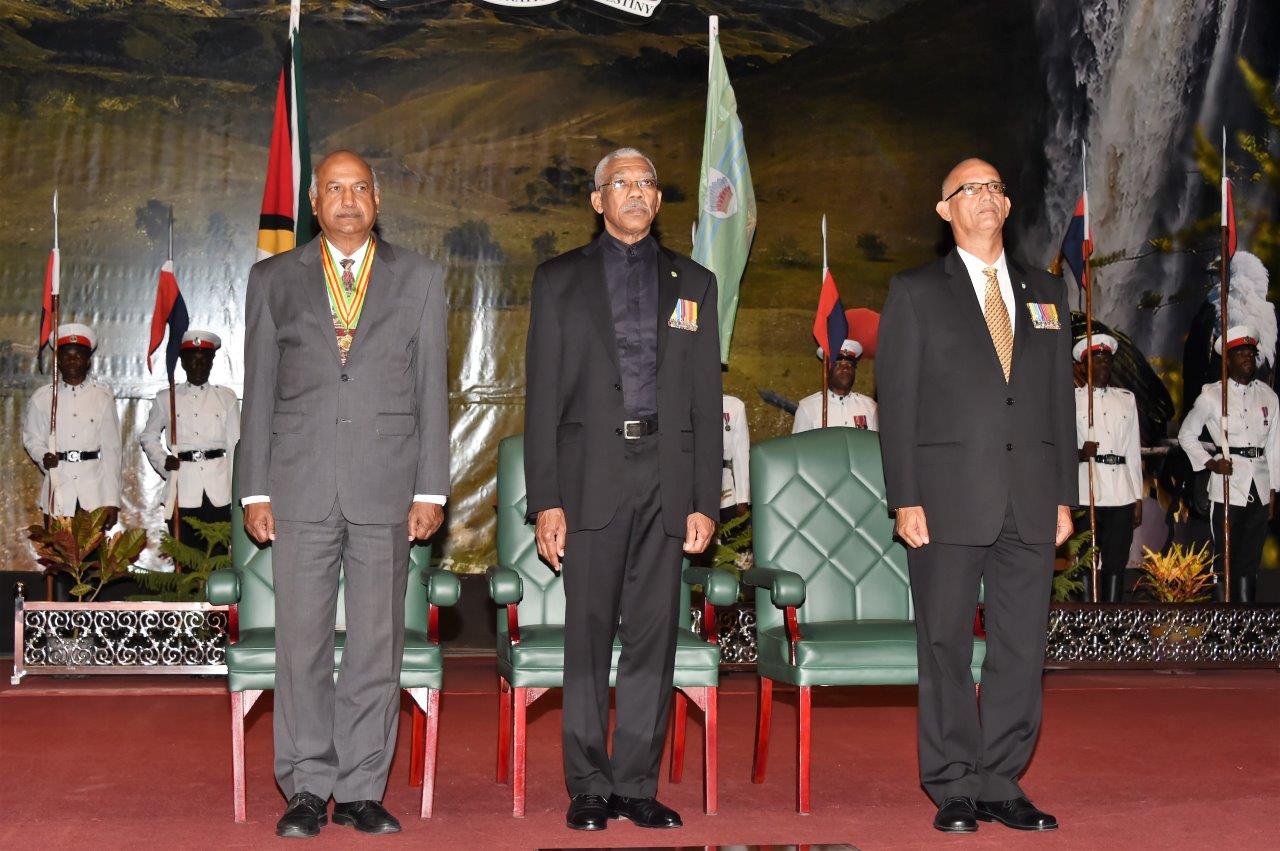 Georgetown, Guyana – (October 6, 2016) Chancellor of the Orders of Guyana, President David Granger, earlier this evening, registered the nation’s appreciation for eight-six Guyanese, who have served their country with distinction, by bestowing them with National Awards, ranging from the Disciplined Services Medal for Meritorious Service to the Order of Roraima, for their outstanding services and sterling contributions to the people of Guyana and to the country’s development.

President Granger in his address to the Awardees, after awarding four persons with the Disciplined Services Medal for Meritorious Service, two with the Military Service Medal, one with the Military Service Star, 25 with the Medal of Service, 31 with the Golden Arrow of Achievement, 21 with the Cacique’s Crown of Honour and two with the Order of Roraima, said that Guyana is a grateful nation and this appreciation can be through the conferral of the National Honours.

From left: Chancellor of the Judiciary, Justice Carl Singh, President David Granger and Director of Protocol of the Ministry of the Presidency, Colonel (Ret’d) Francis Abraham, during the singing of the National Anthem.

“Guyana, in 1970, became a Cooperative Republic and, in so doing, removed the last vestiges of constitutional dependency on the United Kingdom. Guyana then introduced a system of National Honours to recognise the outstanding service rendered to its citizens and to the country. National Honours are not ornaments. They are symbols of nationhood… National Honours are an acknowledgement of the service of citizens; male or female, rich or poor, from the coastland or hinterland, servicemen or private citizens, who have given and who continue to give selfless service to our communities and to our country. National Honours are the ultimate recognition of a grateful nation,” the President said.

“It is a national recognition conferred on persons in various fields, who have made sterling contributions to the country’s development. We must never again neglect of these Honours, or their conferral, on the basis of caprice. Such neglect is contempt for our Constitution and a denial of nationhood. Guyana will pay homage to its deserving citizens by respecting this institution of National Honours and by appointing persons to the Orders with regularity and consistency. Guyana celebrates the awardees’ achievement and consecrates their record of sterling service. The service they have rendered will not be ignored or disparaged,” the President said. 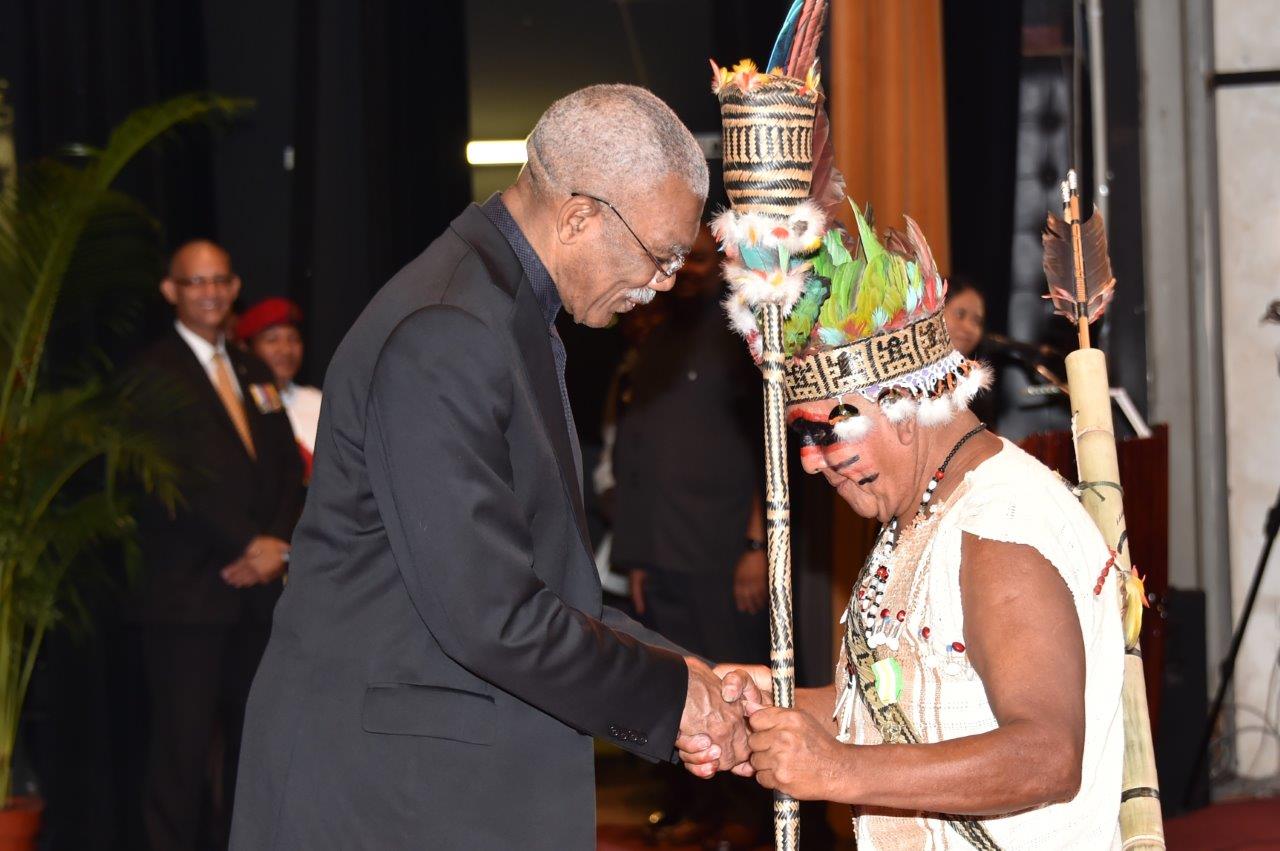 The President extends congratulations to Mr. Tony James from the village of Aishalton, who was awarded for his exemplary service to the Indigenous Peoples of Guyana 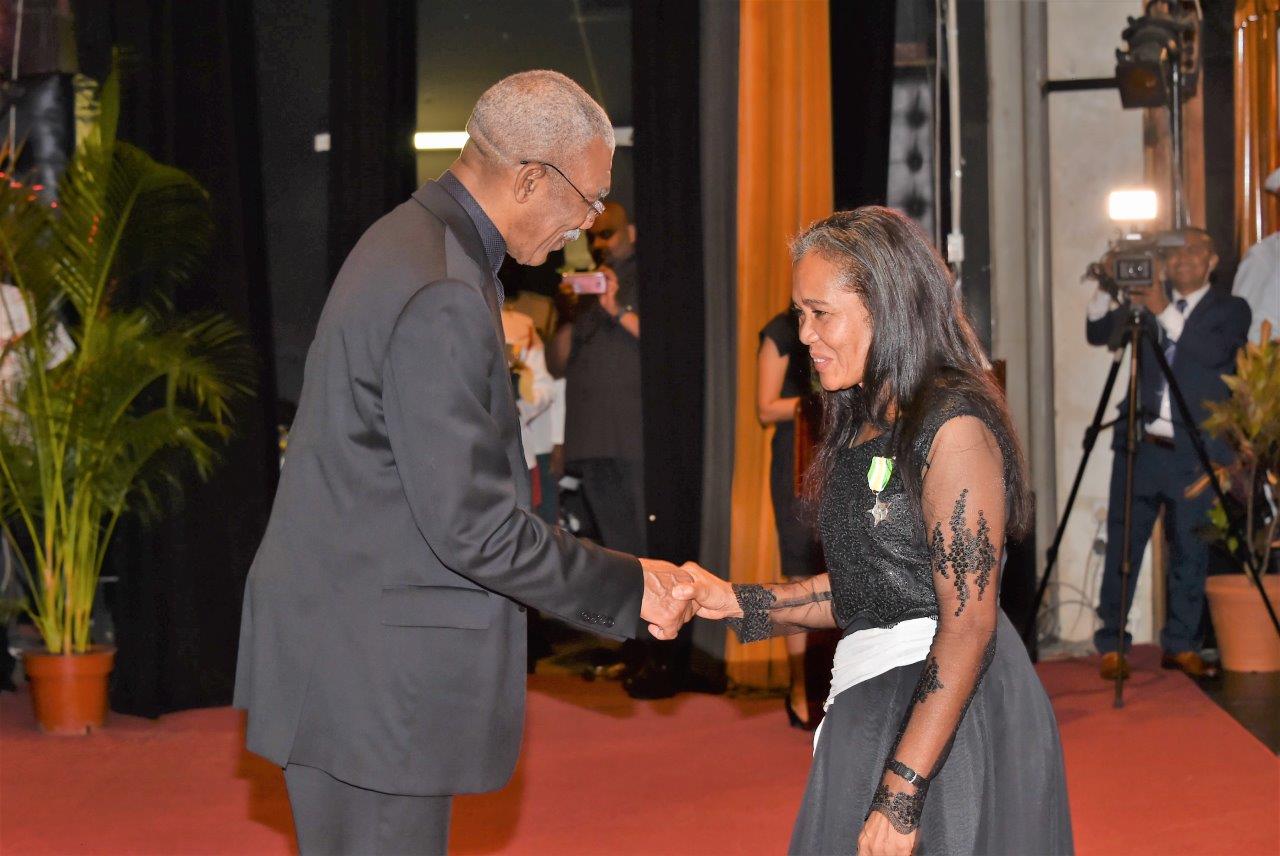 Senior Confidential Secretary to the President in the Ministry of the Presidency, Ms. Nancy Ferreira receives her Medal of Service from President David Granger

Meanwhile, Chancellor of the Judiciary and Chairman of the Advisory Council of the Orders of Guyana, Justice Carl Singh told the awardees that the Investiture Ceremony is a recognition of their contributions to the growth and development of the country and that their service should be emulated by all Guyanese.

“These Awards constitute lasting mementos of achievement and the men and women of our country, whose love and loyalty to their country, their patriotism, their discipline, and their dedication to duty has earned the recognition, which brings them to today’s ceremony. All Guyanese should seek to, in their own way, to contribute to Guyana, as today’s awardees have done. We should each determine for ourselves those qualities, which are best suited to unify our country rather than divide it, to heal the wounds of our nation, rather than aggravate its injuries and to secure for generations to come, the peace, happiness and prosperity of Guyana,” he said.

Human rights’ activist and co-founder of the Red Thread Organisation, Ms. Vanda Radzik, who received the Golden Arrow of Achievement for the work done in her field, said that it is indeed an honour to be recognised by the Government and the people of Guyana, for the efforts and hard work, which she has committed her life to for the improvement of the lives of her fellow citizens over the years. 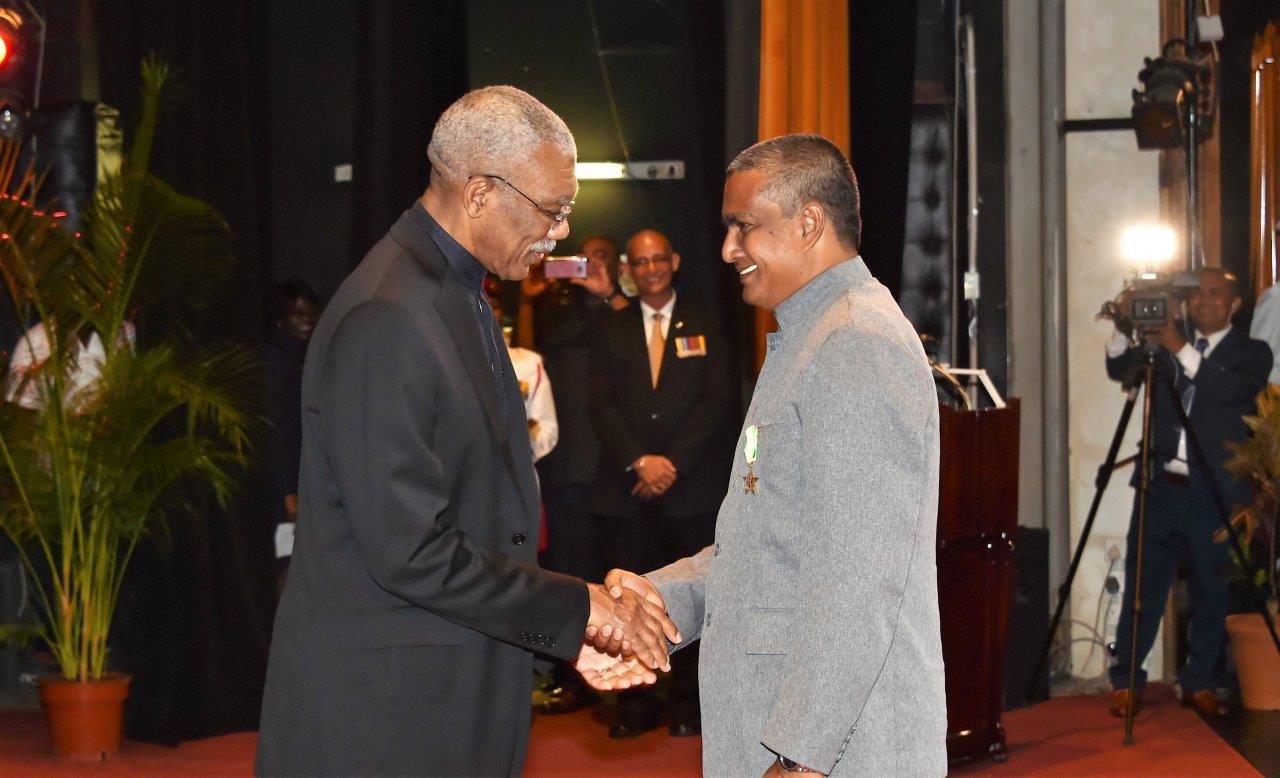 Mr. William Cox, Political Advisor to the President at the Ministry of the Presidency received the Golden Arrow of Achievement for his outstanding years of public service to the people of Guyana.

“It is such a great honour, it is very emotional and it is just a wonderful thing. As the President said, it is above all, recognising our patriotism and service and duty to Guyana and it is wonderful to be recognised…and I think that this Government is off to a good footing because it has really reinstated and made prominent and even filled the gaps over the years when the National Awards were a bit low. So it is terrific that one of the things the President did when he came into office, was to reinstate the National Honours,” she said.

For Mr. Tony Rodney James, the former Toshao for Aishalton Village, Upper Takutu-Upper Essequibo (Region Nine) and Indigenous Peoples Rights’ advocate, after more than two decades of selfless service to his people, it is undoubtedly a proud moment to be a recipient of the Golden Arrow of Achievement.

He said, “I have been working for the last 22 years and I never knew that I would have been this type of person to be the voice of those who cannot speak. It is not an easy job because I do not have a real job or a salary but my commitment is to the people, who do not have a voice. Under the previous the government, my life was threatened but under this government, my work is being recognised and I am very thankful for that.” 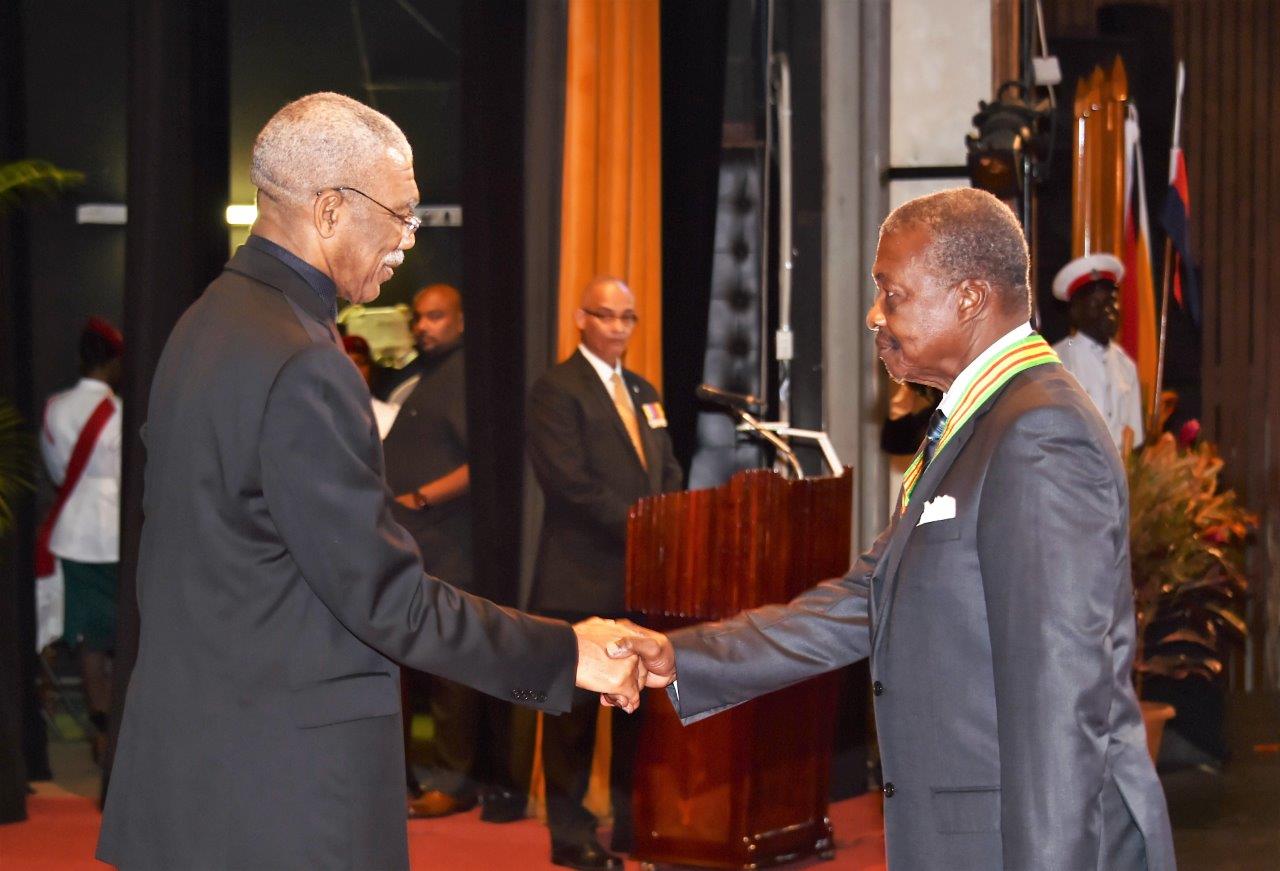 Speaker of the National Assembly, Dr. Barton Scotland, was awarded the Order of Roraima, the second highest National Award of Guyana.

Despite his sterling service, religious Leader, Pastor John Oswald Smith, who received the Cacique’s Crown of Honour, said that he was surprised to be bestowed with this honour. “It is a good feeling to be honoured by the nation for service to the nation and the key here is service and so this award will cause me to work even harder because it was a result of service that it was given. I cannot slack up now. I have to keep doing. And I want to urge others to serve people, serve your nation and even if you do not get an award, have a satisfaction in your heart that you have done your best to serve someone.”