One Laptop per Teacher initiative launched on World Teachers’ Day 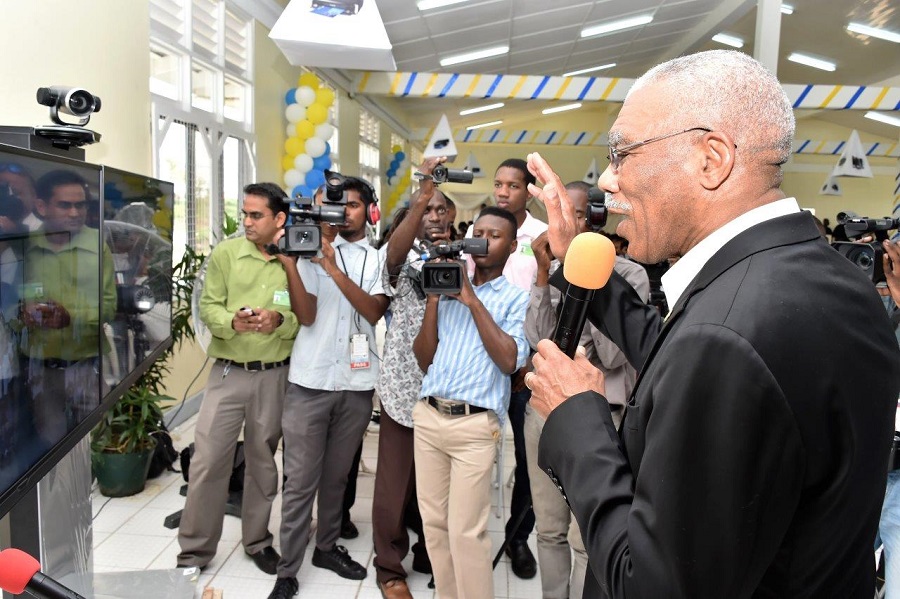 Georgetown, Guyana – (October 5, 2016) President David Granger said that the future of education requires teachers to have a fuller knowledge of Information Communications Technology (ICT). He was at the time addressing teachers at the official launch of ‘One Laptop per Teacher’ (OLPT) initiative held earlier today, at the Cyril Potter College of Education. The initiative is being spearheaded by the Ministry of Public Telecommunications in collaboration with the Ministry of Education.

“The world has entered the ‘Information Age.’ Information, information technology and innovation are transforming almost every facet of human existence. ICT is revolutionising education. It is transforming the manner in which information is assembled, organised and disseminated. It is changing the way education is delivered in the classroom,” he said.

President Granger explained that the idea behind the OLPT dates back to 2011, during a visit to the Rupununi when he gave a teacher a laptop, who then used it to prepare lesson plans and ended up improving her overall efficiency as an educator in the process. “A conscious decision has been taken to reshape the remaining phase of the One Laptop Per Family initiative into what we now have as the One Laptop Per Teacher initiative,” he said.

The Head of State said that ICT should not be seen as a luxury or an option but as a necessity and noted that any Government that wants an educated population must see ICT as an obligation. He informed that his Administration will continue to expand internet access across the country to ensure that even the most remote community is not left behind.

As Guyana joins the rest of the world in observance of ‘World Teachers’ Day’ and President Granger reminded that teachers are at the heart of any education system. He said that through this programme, they will have greater access to ICT and its benefits, which will lead to a transformation in the education system. “The One Laptop per Teacher Initiative, which is being launched this morning, asserts the importance of education to the nation. It acknowledges the role of information in education and the value of our teachers in the delivery of that information to our students. Teachers are essential to education and must lead this process… we don’t want the teachers to be left behind,” the President said.

Minister of Public Telecommunications, Ms. Catherine Hughes announced that in the last three weeks, over 100 educational institutions and organisations have been connected to the Government’s fibre optic network. 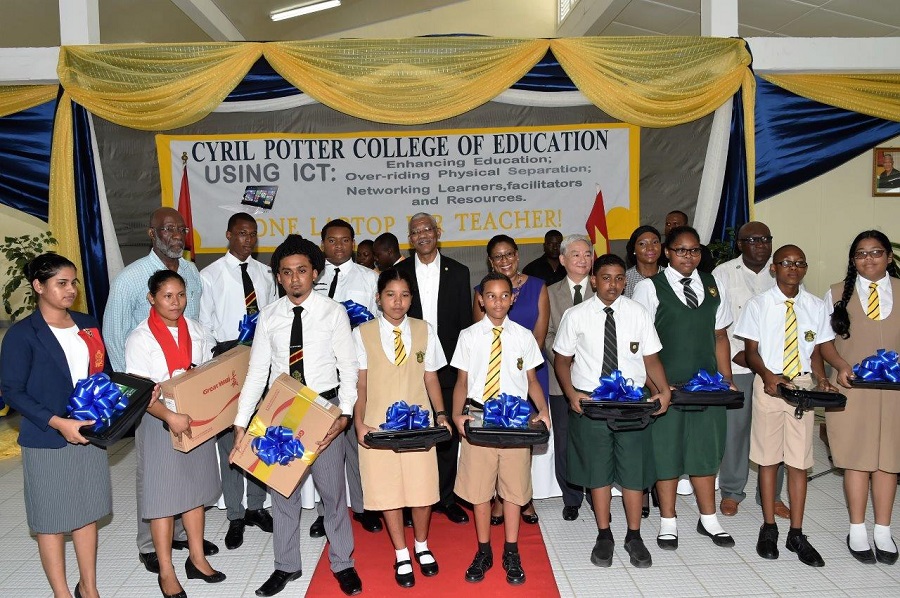 President David Granger with teachers and students, who received laptops at the launch of the One Laptop Per Teacher (OLPT) initiative

“In one short year, we have been able to provide internet access to five regional development officers, both university campuses, 10 technical and vocational institutions in Regions Two, Three, Four, Five and Six… Today’s official launching of the OLPT gives our teachers an important tool to work with and is a vital component of Government’s all-encompassing programme to raise the national level of digital literacy, to improve internet connectivity and, most importantly, it is a means to introduce internet access to our unserved hinterland and interior locations… There is no doubt that higher levels of internet penetration have a direct positive impact on higher level of Gross Domestic Product,” Minister Hughes said.

Advisor to the Minister of Minister of Education, Mr. Vincent Alexander, who spoke on the behalf of Education Minister, Dr. Rupert Roopnarine said that this programme is aimed at fine tuning teachers for improved delivery of education. He added that whether the laptops are used for record-keeping, lesson planning, research or a learning resource in the classroom the process of delivery and receipt of education will be greatly improved. 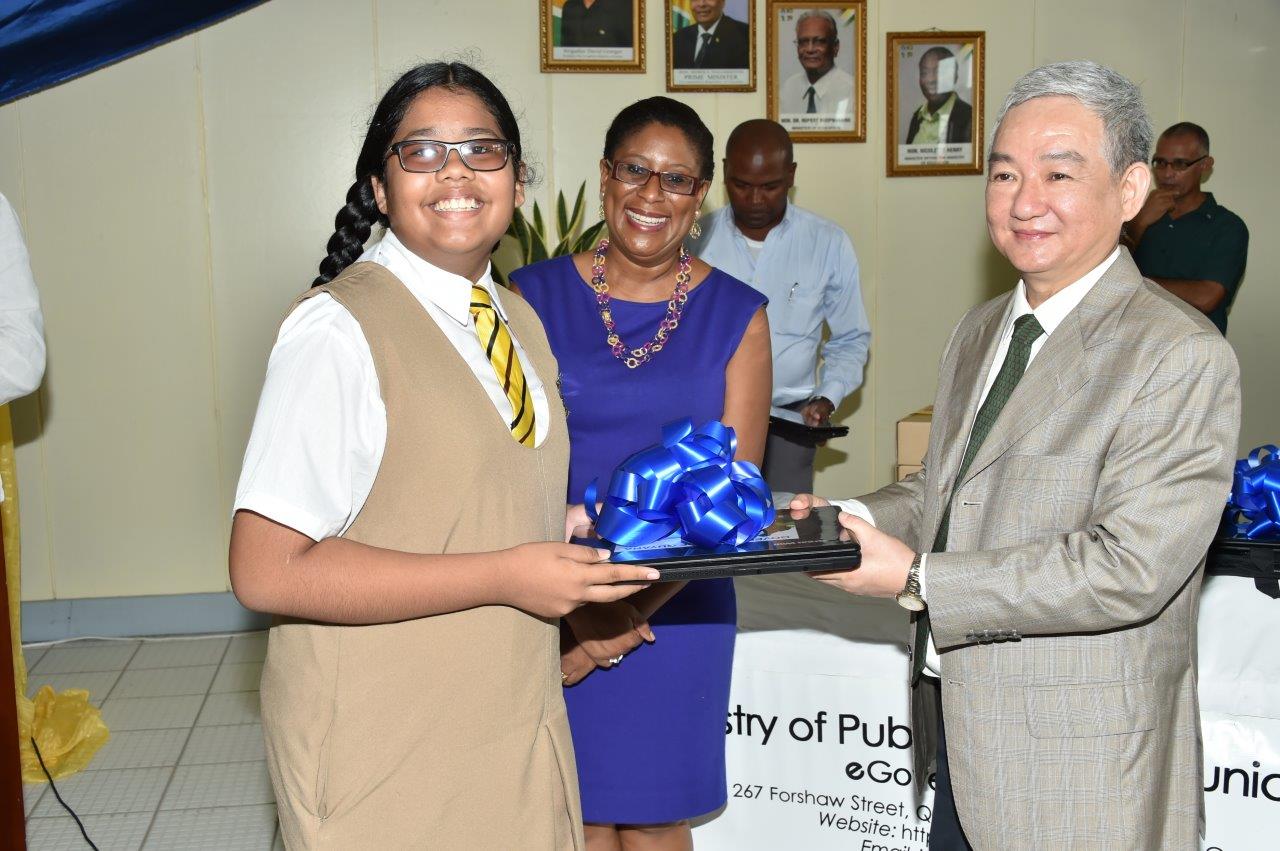 The project is supported by the People’s Republic of China and China’s Ambassador to Guyana, Mr. Zhang Limin spoke of the strong bilateral relations between the two countries over the last 44 years at the launch. He said that making laptops available to teachers is a very wise move since education plays a major role in national development.

At the launch today, several teachers from CPCE received laptops as well as a group of students, who performed exceptionally well as this year’s National Grade Six Assessment (NGSA) examination.