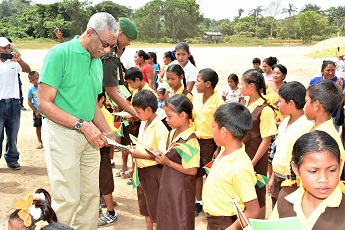 Georgetown, Guyana – (October 1, 2016) President David Granger, today, pledged to ensure that Guyana becomes a leader in the fight against climate change and in the pursuit of ‘green’ and sustainable development, but this he said, can only be achieved if a concerted effort is taken by all citizens of the country.  Demonstrating that commitment, the President also used the opportunity to officially launch the Department of the Environment and introduce its Head, Mrs. Ndibi Schweirs. .

President Granger, who was at the time addressing Ministry of Agriculture staffers, residents of Fairview, Upper Takutu-Upper Essequibo (Region Nine) and other surrounding villages of the Iwokrama Centre for Rainforest Conservation and Development, said that the National Tree Day, is an important observance in the pursuit of Guyana becoming a ‘green’ state and a leader in the fight against climate change. He noted that the world continues to grapple with the effects of climate change and global warming but Guyana, in becoming a ‘green’ state, has the potential and resources to help in the fight against the phenomena. With this in mind, the Head of State is taking a serious approach to the management of these resources.

President David Granger interacts with some of the students from the Fairview Nursery and Primary Schools, who turned out to welcome him today upon his arrival in the Region.

“I’ve undertaken to improve the monitoring of our forests so as reduce illegal deforestation, increase value-added activities in the forestry sector so as to augment carbon storage in long-use wood products and introduce mineral mapping in order to better identify exploitable deposits the reducing deforestation caused by the clearing of lands with only minimal deposits. The ultimate objective of Guyana’s ‘green agenda is the creation of a green state. Guyana’s green state rests on six pillars: the protection of our biodiversity and wildlife; the provision of educational, environmental services and ecotourism; the generation of sustainable energy, the mitigation of the adverse effects of climate change; management of our coastal zone, rivers, wetlands and protected areas; and the management of waste and sanitation services,” he said.

“The agencies – Guyana Forestry Commission; Guyana Energy Authority; Guyana Lands and Surveys Commission; Environmental Protection Agency; Project Management Office is involved, inter alia, in the design and administration of projects under the Guyana Redd + Investment Fund (GRIF); Protected Areas Commission; Office of Climate Change; Wildlife Management Authority and the Iwokrama International Center for Rain Forest Conservation and Development. These agencies, authorities and commissions all travel along the same green pathway towards the same destination – the creation of a ‘green state’. We shall improve the mechanism to ensure more effective communication, cooperation and coordination.   The Department will be tasked with ensuring the development of an action plan to achieve the objectives of Guyana’s ‘green agenda.’ It will ensure that the respective institutions each play their part in realising these objectives,” the President noted.

The Iwokrama Centre for Rainforest Conservation and Development, the President is a pioneering example of what Guyana has to offer the world in the fight against climate change.

“We are here because Iwokrama is in the centre of Guyana and Guyana is in the centre of the Guiana Shield and the Guyana Shield is bigger than Greenland. The Guiana Shield is perhaps the largest area of unspoilt biodiversity on Planet Earth. I call it the second ‘Garden of Eden.’ Iwokrama represents the essential environmental services, which trees provide and we provide these services to the entire earth not just to Region Eight or Nine. We are a part of the lungs of the earth. We help the world to breathe… Guyana is what you call a net carbon sink where we absorb more Carbon than we generate… That is why Iwokrama was happy seven years ago in November 2009, when the Minister of the Environment of the Kingdom of Norway, Erik Solheim, came right here on the banks of the great Essequibo to sign an agreement to preserve our rain forests,” the President said. 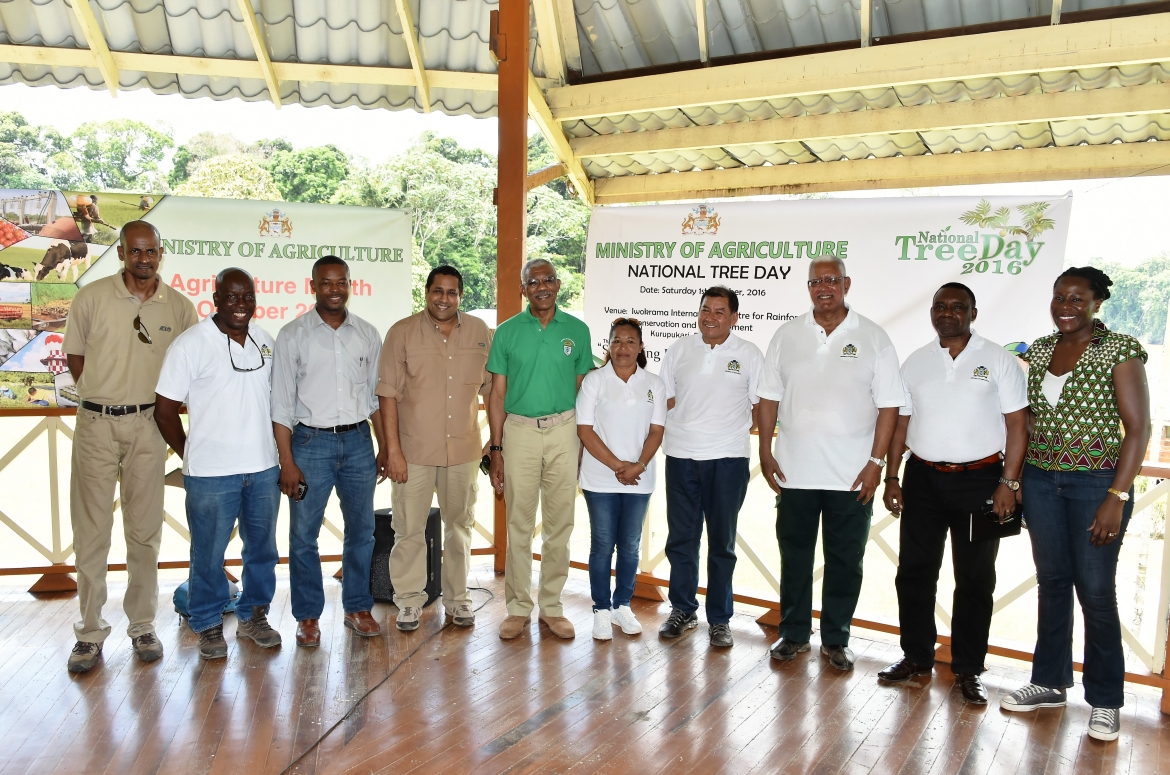 President Granger noted that the forests of Iwokrama preserve the habitats of Guyana’s abundant and high endemic biodiversity and the destruction of trees destroys these habitats and increases the risk of extinction our floral and faunal species. Trees, also, reduce environmental degradation, he said.

“I am serious about National Tree Day because I want each one of you to take away the message that emphasises Guyana’s beauty and biodiversity… Our forests take up about 85 percent of our land mass, the second highest largest percentage forest cover in the world… The trees provide cover for our animals, our beautiful flora and fauna. If you cut down the trees, then the animals will be left in the desert and they will perish and we will lose that valuable cycle of biodiversity. So today is very, very important… Far beyond the importance of planting a tree, it is telling us why we should plant trees,” President Granger said.

The Head of State, who has been pushing a ‘green’ agenda since his assumption to office in May 2015, said that the forests of Iwokrama are a source of sustainable livelihoods for the indigenous communities who reside in its boundaries as it provides food, shelter, medicines and forest products which support the economic well-being of the residents of those communities in a sustainable manner. For this reason, he noted, the country’s biodiversity must be protected.

“The Iwokrama International Centre for International Rain Forest Conservation and Development was created as a laboratory for biodiversity; a laboratory to fulfil Iwokrama mission which is to “…develop, demonstrate and make available to Guyana and the international community, systems, methods and techniques for the sustainable management and utilization of the multiple resources of the tropical forests and the conservation of biological diversity.”… Iwokrama will be maintained as a centre of research into sustainable development practices. We will establish, here, an international institute for biodiversity that will allow local, regional and international students and researchers to come to Iwokrama to study Guyana’s flora and our fauna,” the President noted.

Minister of Agriculture, Mr. Noel Holder said that by proclaiming a National Tree Day, it is the Government’s and his Ministry’s hope to create more awareness on the importance of all types of trees for food, medicinal purposes, fibers for clothing and wood for shelter, and other such usages. “I urge all Guyanese to commit to planting trees, reducing deforestation with the continued effects of reducing poverty and promoting sustainable livelihood for all dependent on trees,” he said.

Vice President and Minister of Indigenous Peoples’ Affairs, Mr. Sydney Allicock, emphasised the importance of education and awareness so that every Guyanese can see themselves as stewards of the environment.

“It is about education, about bringing people together and understanding more of what it is to have a country like ours, a Centre like Iwokrama and people like ourselves. For us to achieve this, it is not going to happen by Government alone. Government, as we see it, is the facilitating body but you are the partners in this drive… this is one way we can help to bring the people in the country together and the President is very passionate about this. The Potential is great. We need to work collaboratively and I am happy that the Ministries will be pooling their resources, ideas and strengths together to pull these things off. We look forward to the next fifty years for economic independence. We don’t have to look far; we just have to look into ourselves,” Minister Allicock said.

“This tradition indicates this administration’s commitment to biodiversity, a green economy, healthy living and the fight against climate change. Each tree we plant, nurture and care for is an expression of our commitment to a ‘green’ economy. Each new tree is one more shoot and shot in the battle against climate change.  It is not doom and gloom. Today’s event proves this administration’s commitment to sustaining biodiversity by encouraging and ensuring that planting of trees as a reminder of the indispensable role of trees in our survival and that of our planet. The emphasis, at this time, is not just planting trees but focusing on fruits trees and other such trees, which we can use as food. As servants of the people, this Government will conceive and implement programmes, which will benefit all Guyanese,” she said.

As part of National Tree Day activities, the President planted trees at the Fairview Airstrip, the People’s National Congress Headquarters at Sophia and at the Iwokrama Centre for Rainforest Conservation and Development. National Tree Day was launched on October 1, 2015 by President David Granger and will be observed annually on the first Saturday in October going forward.

Guyanese weigh in on social cohesion in countrywide consultations