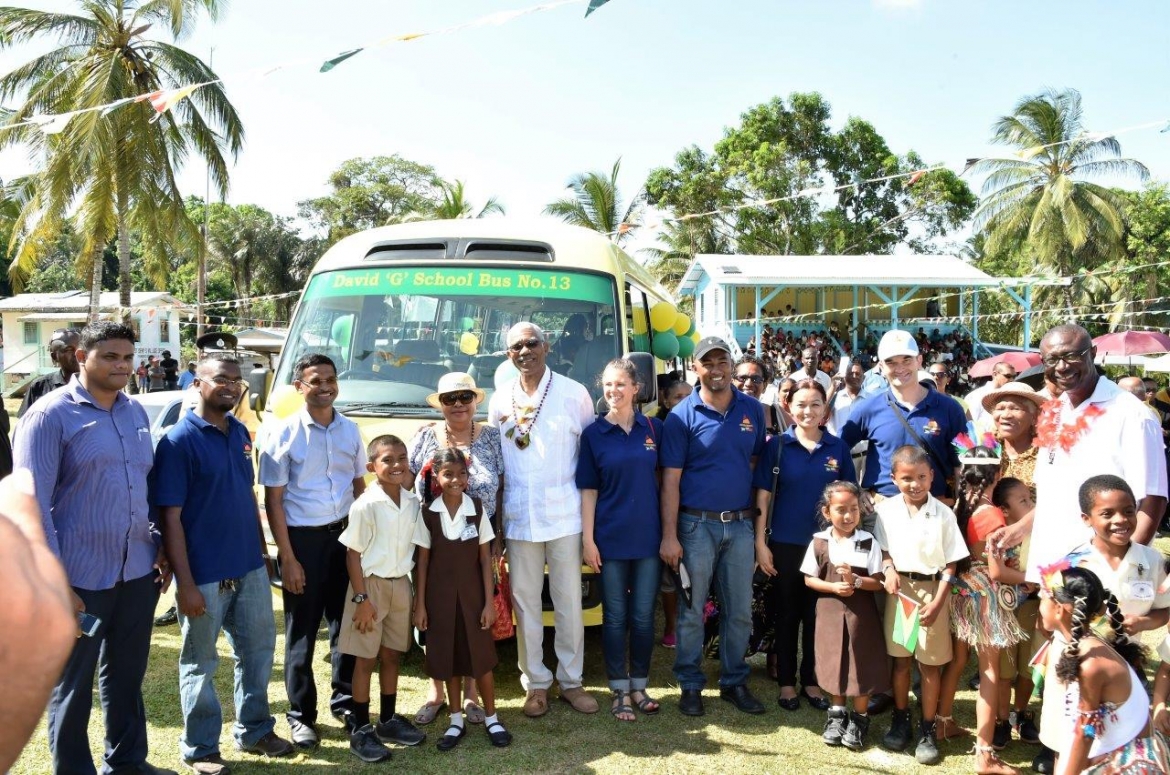 Georgetown, Guyana – (September 29, 2016) Approximately 14 months after President David Granger made the initial call on his 70th birthday for the provision of transportation to get children to school, the thirteenth school bus was commissioned today, at Tapacuma Village, Pomeroon-Supenaam (Region Two). The 26-seater vehicle was donated to the Buses, Boats, Bicycles + Breakfast and Books (Five Bs) programme by businessman, Mr. Joe Jagmohan of Innovative Mining Incorporated.

The President was accompanied by Minister of Social Cohesion, Ms. Amna Ally, who is instrumental in the implementation of the ‘Five Bs’ programme, Minister of Indigenous Peoples’ Affairs, Mr. Sydney Allicock, and Minister within the Ministry of Education, Ms. Nicolette Henry.

Delivering the feature address at the Tapacuma Village playfield, President Granger reminded that the idea behind the programme came into being after Pomeroon residents, some of whom were present at the commissioning ceremony today, complained bitterly about high costs they are forced to incur to send their children to school in Charity on the Essequibo Coast.

“This entire programme of buses and boats and bicycles came out of the Pomeroon – Supenaam Region…the man who first told me that is right here, his name is name is Garraway,” the President informed. 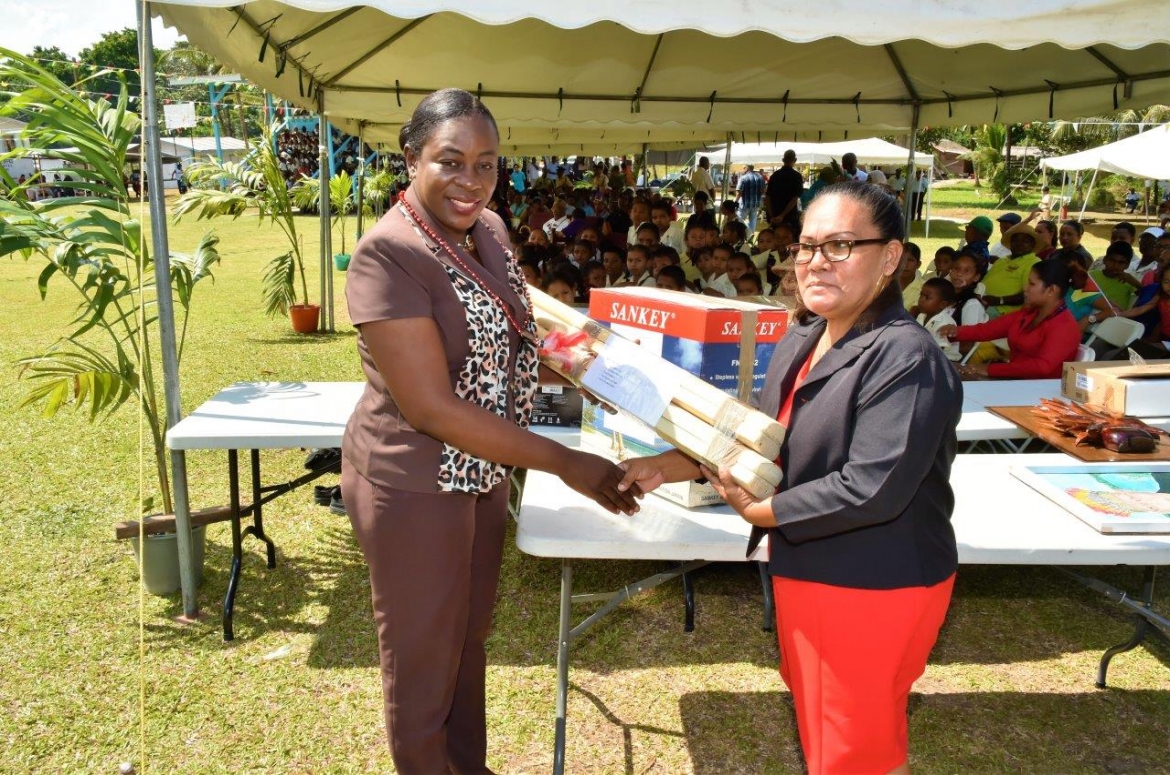 The Head of State spoke of his Government’s deep concern for the state of affairs of the education system in Guyana, where a large number of the students fail at the National Grade Six Assessment (NGSA) examinations. He said that this level of underperformance is not because they children lack the ability to succeed, but rather they are not afforded the opportunity to attend school regularly. This situation is made worse by the high school dropout rate and the President called for more private sector and community level support to ensure the ‘Every Child in School’ policy is realised.

“We want you the children to want to go to school and we want you the parents and teachers do everything possible to get children to school every day…we will try to help you but you must take a pledge to ensure that children attend school, without education, you cannot progress in the world today,” President Granger said.

Turning to the children, he said if they intend to acquire good jobs so as to enjoy a higher standard of living then education is a priority.

“Education will open the door to employment because once you are educated you wouldn’t even have to look for a job you will be able to employ yourselves and this is a region that is crying out for self-employment,” he said.

The President also urged residents to understand their role in the national and regional economies. He explained that if the economy falters then everyone suffers and likewise if the region thrives, everyone will enjoy a better life. He reminded too, of the agricultural potential of Region Two, which has earned it the reputation as the country’s ‘rice bowl’.  “You have to build a strong economy in Region Two. Once you have a vibrant economy people are going to bring investment in this region,” he said. 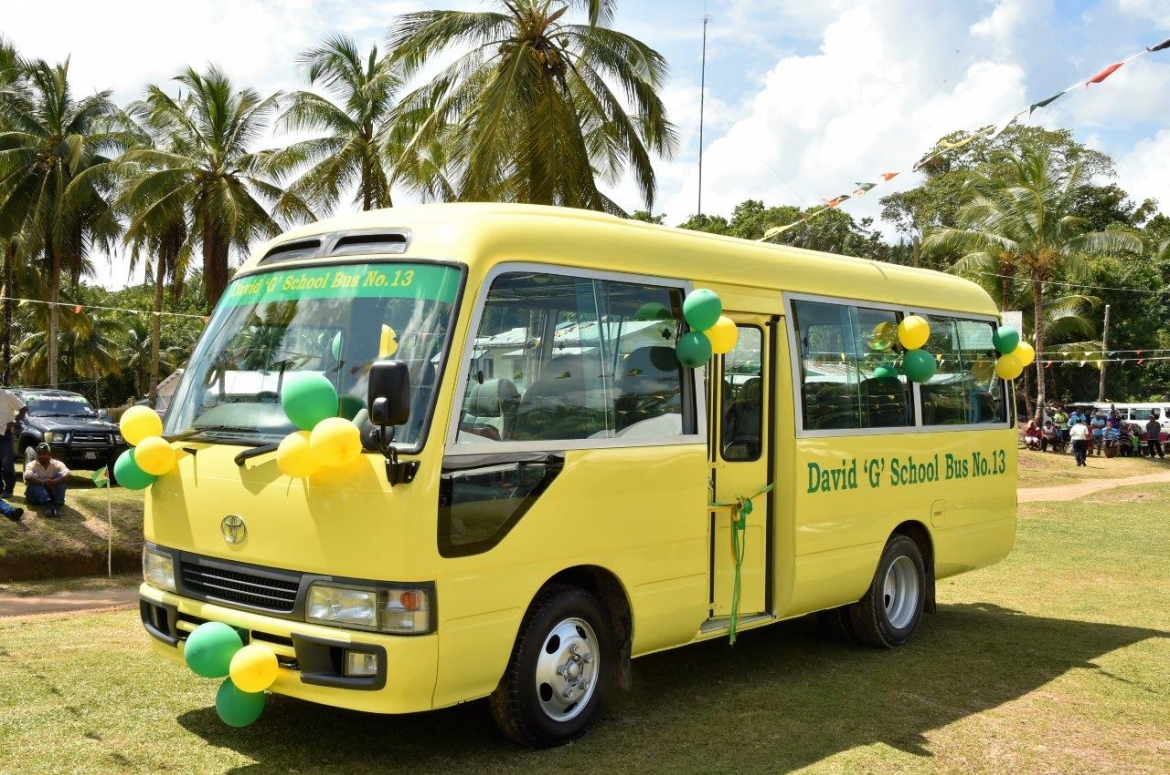 Meanwhile, Minister Ally explained that during a ‘Face the Community’ engagement that was conducted by her Ministry in that community, residents spoke of their transportation woes and indicated that the school was in need of a printer. At today’s event, in addition to the commissioning of the bus, Government exceeded expectations why delivering not only the printer, but also a computer and a quantity of sports gear.

“This is all in keeping with the President’s vision for all the people of Guyana. The President wants to see every child in school and he is following that vision with action… This is a new Government and we will work to ensure that you have that good life you deserve,” Minister Ally said.

She informed the community that the Regional Administration will be responsible for providing a driver, fuel, and maintenance of the vehicle, which will transport children from Tapacuma and Mainstay/Whyaka to schools on the Essequibo and back.

Already the Region has benefitted from two speed boats, which serve the children in Upper and Lower Pomeroon.  Regional Executive Officer, Mr. Rupert Hopkinson said that the region welcomes any initiative that will facilitate learning, noting that when children have access to quality education, they grow up to be adults that are better equipped to develop their country and a developed country is better positioned to offer a higher standard of living to its citizens. 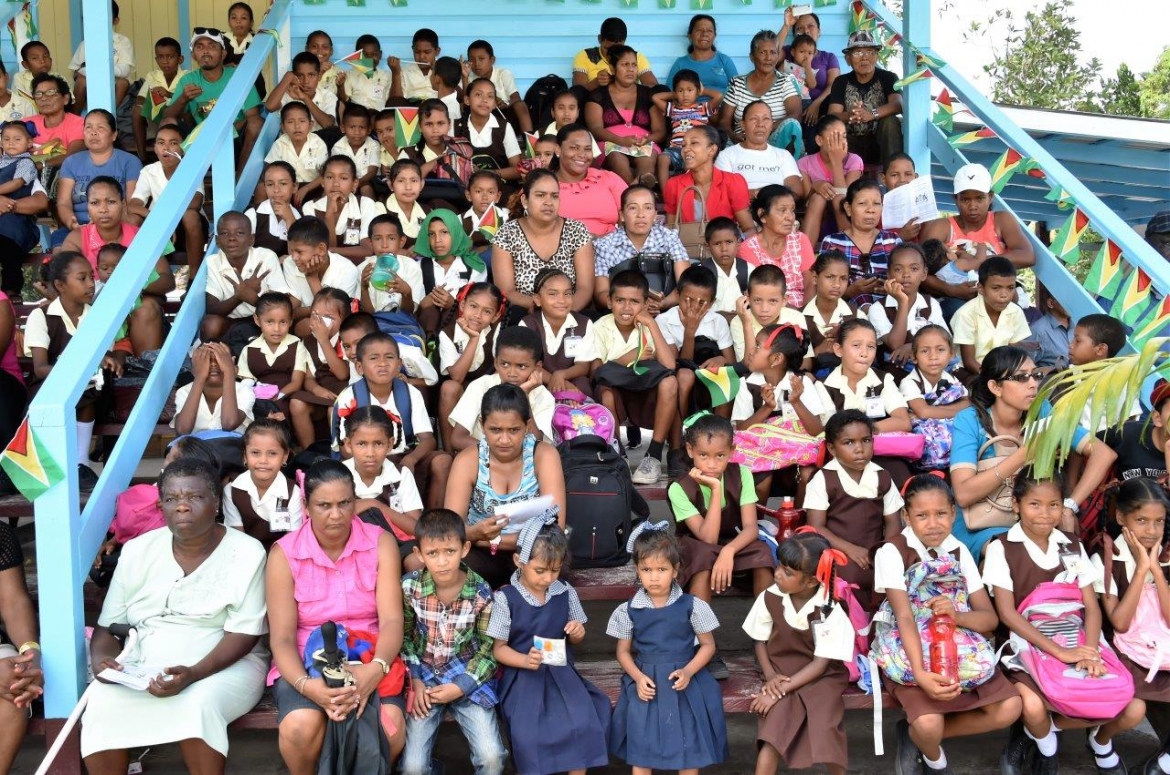 A section of the gathering at the Tapacuma Village play field

Ms. Amanda Lowe from Innovative Mining Incorporated said that her company is honoured to be part of the ‘Five Bs’ initiative, since they believe that education is the cornerstone to development. “The company applauds the President for conceptualising the programme, which is aimed to build a better future,” she said.

Regional Education Officer, Ms. Baramdai Seepersaud said that this initiative will help to boost school attendance in the Region. “Our students will have better access to secondary education, which is offered on the coast and this will boost the Ministry of Education’s drive to achieving the Millennium Development Goal of Universal Secondary Education,” she said.