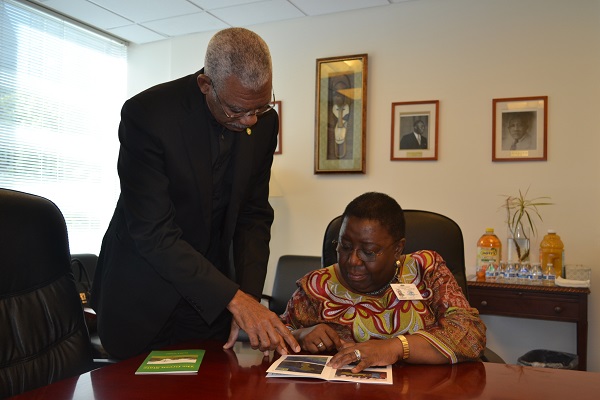 New York, United States – (September 22, 2016) President David Granger, today, pushed for the partnerships of Consulates and joint commissions to deepen alliances with Liberia and Nigeria even as Guyana looks to deepen relationships with West African States. These bilateral meetings were held on the sidelines of the ongoing 71st United Nations’ General Assembly in New York.

The President met with President Muhammadu Buhari of Nigeria and discussed possible cooperation in the area of petroleum industry management, noting that Guyana can learn the lessons of the more than 50 year-old industry in that country. Additionally, the two Heads of State agreed that there are potential areas of collaboration in education, culture, security and trade. President Granger said that he welcomes the opportunity to renew relations and looks forward to greater trade and transfer of knowledge between the two countries.

President Buhari agreed to have the Foreign Minister of Nigeria, Mr. Geoffrey Jideofor Kwusike Onyeama interface with the Minister of Foreign Affairs, Mr. Carl Greenidge to explore how the two countries can create a pathway to strong relations.

President David Granger going through a publication called State of Peace, which outlines Guyana’s position on the border controversy with Minister of Foreign Affairs of Liberia, Mrs. Marjon Kamara.

The Venezuela border controversy was also discussed at the meeting. This issue was also high on the agenda at the meeting with President Ellen Johnson Sirleaf of Liberia, who recommended that the President scale-up efforts to win support among African nations for Guyana’s cause. Additionally, the two Heads of State discussed the possibility of exploring trade in rice and sugar. The President of Liberia said that small nations must find ways to collaborate in order to effect change and promote equity.

She said that Liberia has much to learn from Guyana in areas such as the management of protected area systems and conservation. President Johnson Sirleaf said that Liberia does not have the capacity or experience that Guyana has in these areas and she looks forward to the opportunity to collaborate in these areas. President Granger, in response, indicated that the establishment of a joint commission and Consulates would help to promote regular and consistent collaboration and communication to ensure the development of areas of partnership. 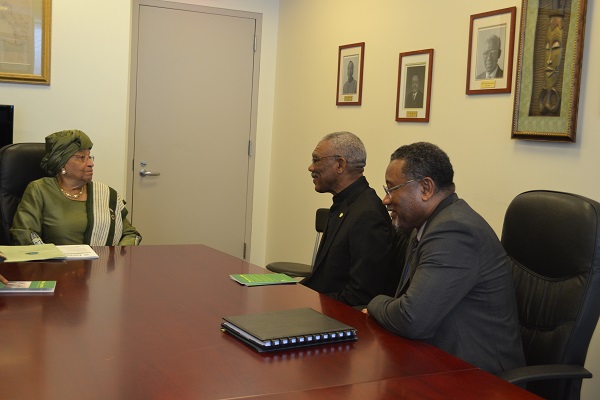 Remarks by H.E. Brigadier David Granger, President of the Cooperative Republic of Guyana, to the Mayor and City Council of Georgetown, on 27th June, 2016