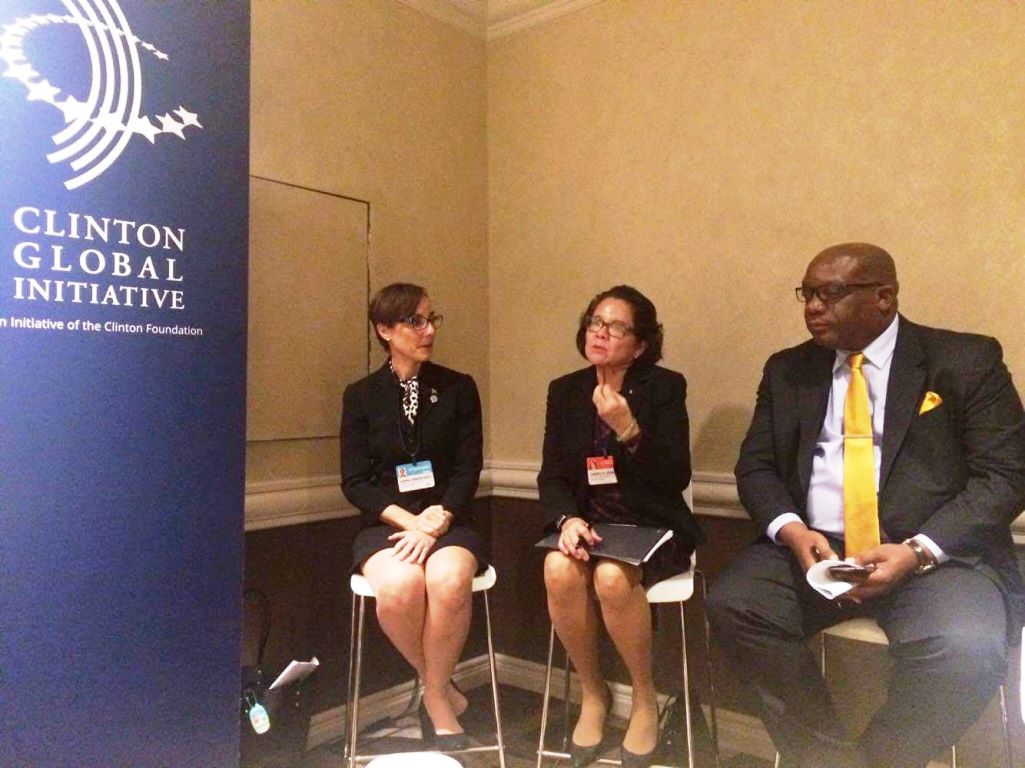 New York, United States – (September 22, 2016) First Lady, Mrs. Sandra Granger said that global solidarity is a prerequisite to ensure the stamping out of gender inequalities in keeping with the 2030 Sustainable Development Goals, particularly Goal Three, which speaks to the empowerment of women and girls. She made these remarks during a panel discussion at the Annual General Meeting of the Clinton Global Initiative (CGI) in New York. The other panelists included Prime Minister, Saint Kitts and Nevis, Mr. Timothy Harris and Executive Director, United Nations Population Fund (UNDP), Babatunde Osotimehin.

The First Lady’s presentation garnered a pledge of support from the Commonwealth Secretary General, Baroness Patricia Scotland, who delivered introductory remarksat the forum for ‘Every Caribbean Girl, Every Caribbean Woman’ Initiative (ECGECW), which is spearheaded by CARICOM and the United Nations Population Fund (UNFPA) and said that CGI’s involvement can lead to stronger support mechanisms; legal processes that are less intimidating; health and social protection systems that reduce the inequalities, discrimination and stigmatisation that disproportionately affect the poor and marginalised.

Mrs. Granger explained in the area of education, women and girls in the Caribbean outperform their male counterparts, yet unemployment among this gender demographic is notably higher, while in other cases they earn far less than men.

“These factors impact negatively on empowerment and especially on the health and well-being of our women and girls. This is why CARICOM First Ladies are championing ‘Every Caribbean Girl Every Caribbean Woman’,” she said.

The First Lady also spoke of the need for improved healthcare for women in the region, noting that high incidences of HIV/AIDS and cervical cancer. This, she said, underscores the need for health and family life education in our schools curricula and in the media, increased awareness and for the implementation of a strong implement an immunisation campaign to eliminate this scourge.

“We are even more disturbed when we consider girls, who are victims of trafficking, rape and incest. These young women have not only had their human rights violated, they are at risk of pregnancy and are also more vulnerable to sexually transmitted diseases and to HIV/AIDS… All stakeholders must collaborate to reduce teenage pregnancy so that the Caribbean no longer ranks second behind sub-Saharan Africa in this regard,” she said.

Speaking about on-going efforts in Guyana, the First Lady informed that panel about her work with Women Across Differences organisation to provide counselling and training in sexual and reproductive health and life and parenting skills, as well as assisting girls to complete their secondary education.

Additionally, the First Lady’s Office has rolled out training programmes in Information Communication Technology (ICT) and the Self-Reliance and Success in Business workshops that promotes economic empowerment among rural women. 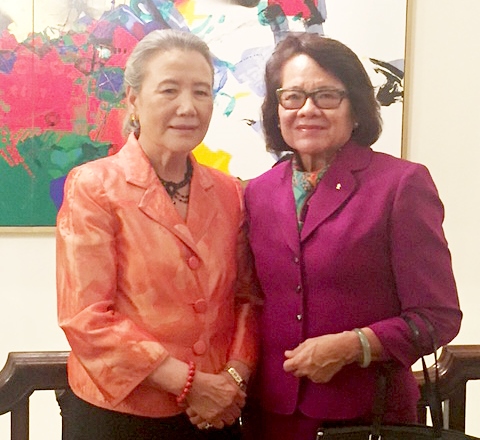 “The Caribbean is drawing support from its national and regional partners and hopes that additional support may be forthcoming as we roll out from the pilot in Jamaica to deal with specific national priorities…The cries of these women and girls cannot be ignored. Help us achieve our potential as vibrant, viable members of our communities,” the First Lady said.

This forum was held with the aim of discussing how girls and women in the Caribbean can be supported though financial resources medicines and other supplies, exploring technical expertise that can benefit government, policy and pilot implementation and examining culturally relevant media and communications strategies, which are important vehicles for educating parents and young people about the benefits of both prevention and care seeking.

The First Lady is currently with President David Granger at the 71st Regular Session of the United Nations General Assembly. However, she has a series of engagements on side-lines of the UN meeting. On Tuesday, she attended a reception hosted by the Wife of the UN Secretary General, Mrs. Ban Soon-taek and over the next two days, she is scheduled to attend Science Technology Engineering and Mathematics (STEM) forum organised by the Bridge the Gap organisation and other activity at the Flatbush Seventh Day Adventist Church in Brooklyn.