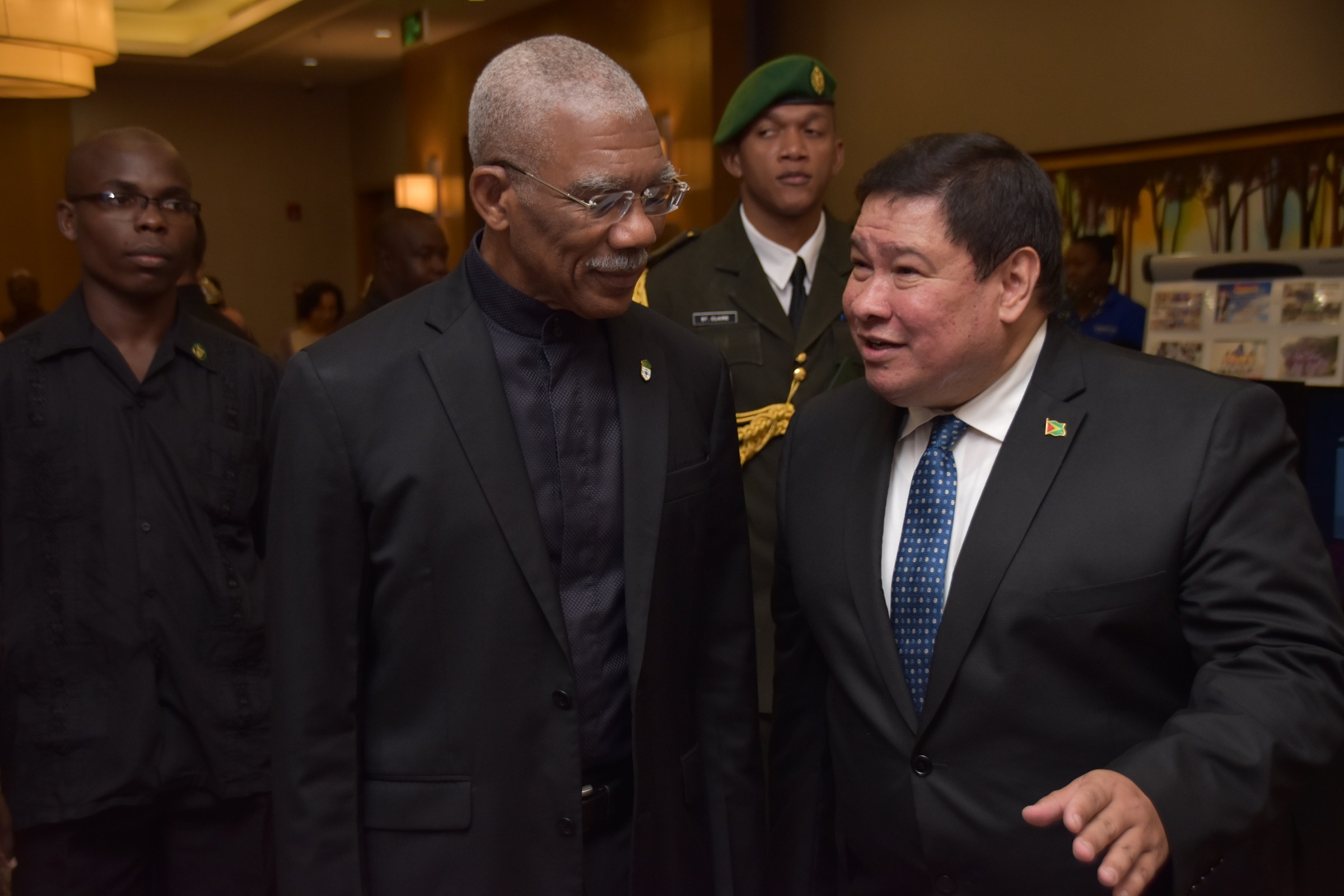 Georgetown, Guyana – (September 19, 2016) President David Granger said that he is satisfied with the efforts of United Nations (UN) Secretary-General, Mr. Ban Ki-moon in trying to resolve the Guyana-Venezuela border controversy. He said that while his Government had hoped that the process of ending the 50-year long controversy would have been further advanced, it is not due to lack of effort on the part of the Secretary-General’s Office, but rather the slothful pace at which the Venezuelan Government is moving.

The President made these remarks earlier today, at a press briefing held on the margins of the 71st Regular Session of the UN General Assembly currently underway in New York. He was joined by Minister of Foreign Affairs, Mr. Carl Greenidge, Guyana’s Permanent Representative to the UN, Ambassador Rudolph Michael Ten-Pow and Sir Shridath Ramphal, a seasoned international personality who has been assisting with the legal and other issues relating to the controversy.

“I am satisfied with what the Secretary-General has done; I am not satisfied that the Bolivarian Republic has acted in good faith. It is clear that much more needs to be done by Venezuela if this matter is to be resolved… In my experience over the last 50 years I have not seen a Secretary-General so engaged in this matter, he has done everything possible over the last year since first meeting in Bridgetown. I am convinced of his sincerity in trying to bring this matter to closure,” the President said.

He explained that since the signing of the Geneva Agreement in February 1966, over 50 years ago, Guyana has abided by all of its provisions. This agreement has given the Secretary-General specific responsibilities in the absence of Guyana and Venezuela reaching a mutually accepted position.

The Head of State further outlined that the Secretary-General is required to choose a course for the peaceful resolution of the controversy. At this point in time however, all other courses of action has been exhausted including the Good Officer’s process, which is why Guyana has recommended that the Secretary-General refer the matter for juridical settlement, which is the only remaining option.

President David Granger speaking to members of the Guyana media corps during a press briefing, held at the Guyana Mission in New York

“We waited for 50 years and Guyana’s approach now is to ask the Secretary-General to take the matter forward for a juridical settlement so that we don’t have to wait for 50 more years for a settlement…I am very hopeful that this Secretary-General, given his engagement over the last year or more, is going to do something which is going to lead to a favourable outcome,” he said.

Similar sentiments were expressed by Foreign Minister Greenidge who affirmed that Guyana is not prepared to accept anything other than a move to the International Court of Justice (ICJ) to bring a permanent resolution to this matter. “What we will be doing is speaking to the SG for an update as regard his assessment of what has happened since the last time we met and an indication from him on how he proposes to move forward, if not between now and the future then certainly between now and when he demits office,” the Minister said.

He recognised however, that though a clear pronunciation on the course of action to be taken may not come out of this meeting, Guyana fully acknowledges the work of the Secretary-General’s Office in working with both parties to take steps to resolve the matter.

Speaking about other matters on the agenda for the remainder of the Session at the UN, President Granger informed that he will be promoting Guyana’s ‘green’ agenda. He explained that the country is part of the Guiana Shield, which is bigger than Greenland, and it contains the most unique of biodiversity and is considered the ‘lungs of the earth’. This, he said, is the most important development in Guyana’s international relations.

There is already a standing agreement with the Kingdom of Norway and last week Guyana and the Federal Republic of Germany signed an agreement for the continuation of the Guyana Protected Areas System (GPAS) project.

Additionally, Minister Greenidge disclosed that Guyana will join with other CARICOM territories to hold talks with countries like the United States and Japan on issues such as regional security and corresponding banking.

The President and his delegation will also be speaking with partners in the African, Caribbean and Pacific (ACP) Group of States and will also be holding bilateral meetings with countries like Fiji, India and Nigeria, with the view of deepening political and economic cooperation.

Address of His Excellency David Granger President of the Cooperative Republic of Guyana to the 71stSession of the United Nations General Assembly 2016.09.20 Guyana: A ‘green’ state threatened