Guyana and Germany working together to combat climate change 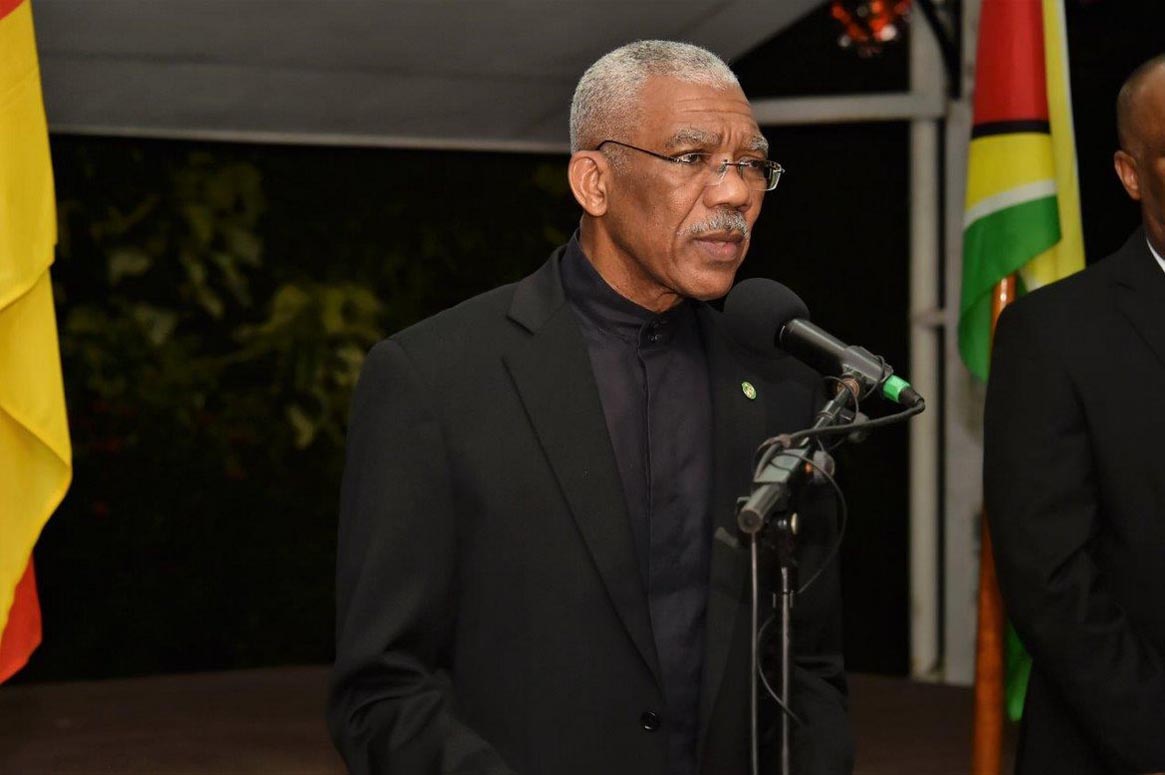 Georgetown, Guyana – (September 16, 2016) President David Granger, this evening hailed 50 years of friendly relations between the Federal Republic of Germany and the Cooperative Republic of Guyana at a reception to observe this milestone relationship between the two countries, which coincides with Guyana’s 50th year of Independence. The event was held at the Georgetown Club.

The Head of State noted that the relationship between the two countries has had an impact beyond their borders and on all humanity, particularly as it relates to climate change and environmental management.  “Our shared concerns have intensified our relations and increased our emphasis on protected areas management. Guyana is a net carbon sink. A green canopy of rainforest envelops more than 85 percent of its land mass, the second highest percentage forest cover in the world. These forests help the earth to breathe by sequestering more carbon than is emitted by the country’s human activities. These forests and protected areas provide environmental services to all humanity by storing carbon and restoring the balance of oxygen and humidity in the air,” he said.

President David Granger delivering remarks at the reception to observe the 50th Anniversary of Diplomatic Relations between the  Cooperative Republic of Guyana and the Federal Republic of Germany.

Referencing the signing of an agreement for the third phase of Guyana Protected Areas Systems (GPAS) Project between Guyana and Germany, earlier in the day, the President Granger said that it will provide further support for environmental and ecological protection and will advance Guyana’s green agenda.

The two countries have also cooperated in the areas of education, health and sports and the President iterated Guyana’s appreciation for Germany’s cancellation of debt in 2004.  “The past fifty years witnessed a deepening of the cooperation between our two countries based on the shared values of mutual respect and understanding, peaceful co-existence, respect for each other’s sovereignty and territorial integrity, non-interference in each other’s internal affairs and a commitment to human development,” he said.

Germany’s Regional Director for Latin America and the Caribbean, Ambassador Dieter Lamle, bringing greetings on behalf of the German Government, said that Guyana’s relationship with Germany goes back to before the country gained its Independence in 1966, noting that Robert Schomburgk, a German scientist and surveyor, was commissioned by British in 1814 to delineate the a western boundary between British Guiana and Venezuela.  Mr. Lamle said, “Unfortunately Venezuela at that time did not accept [the Schomburgk line] and life would have been much easier if it had done so.” 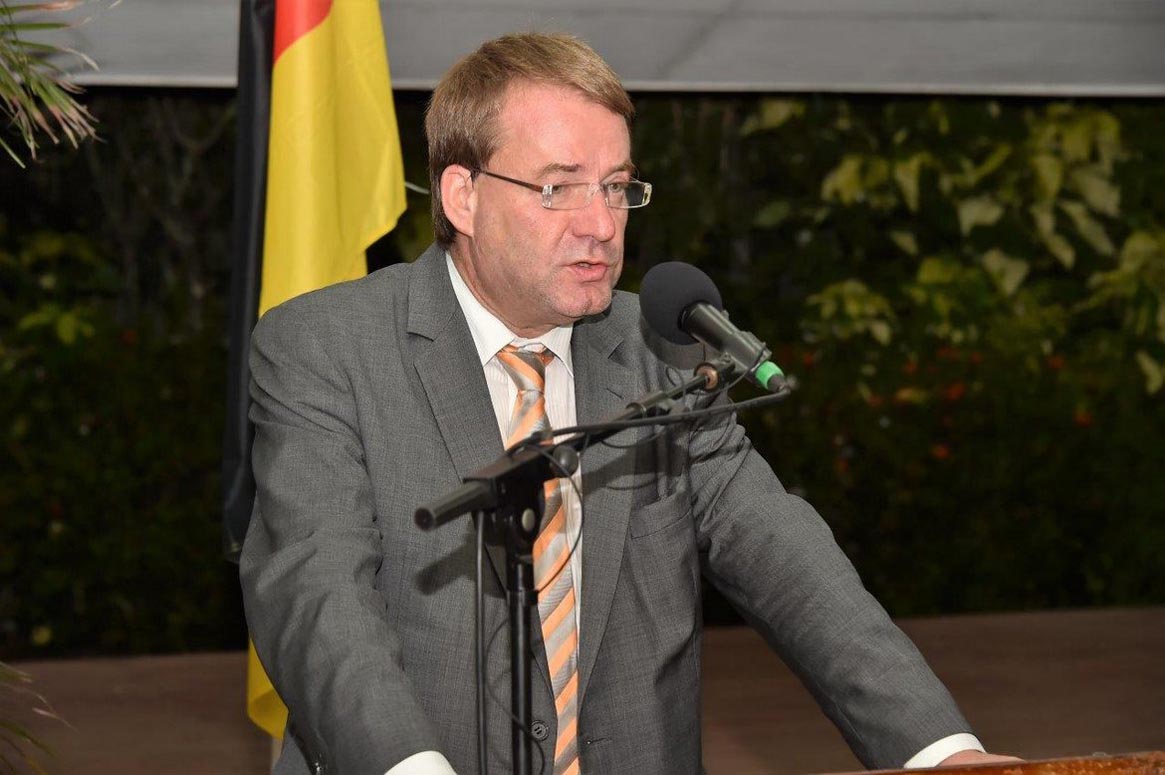 Germany’s Regional Director for Latin America and the Caribbean, Ambassador Dieter Lamle bringing greetings on behalf of the Government of Germany on the occasion of Guyana’s 50th Independence Anniversary.

The Regional Director congratulated President Granger for his ‘convincing and passionate’ promotion of green development as Guyana’s forests are a treasure to be valued by the world.  He said, “Guyana’s natural heritage is amazing… Guyana is globally recognised for its unique biodiversity and for having one of the lowest deforestation rates in the whole world.  Mr. President I would like to congratulate you for [your] excellent green policy.  Guyana can be happy to have you as President.”

Speaking on bilateral cooperation between Guyana, as well as relations with the Caribbean Community (CARICOM), Mr. Lamle also noted that while some problems are local and some are regional, others are so big that nations have to work together on a global scale in order to tackle them effectively. 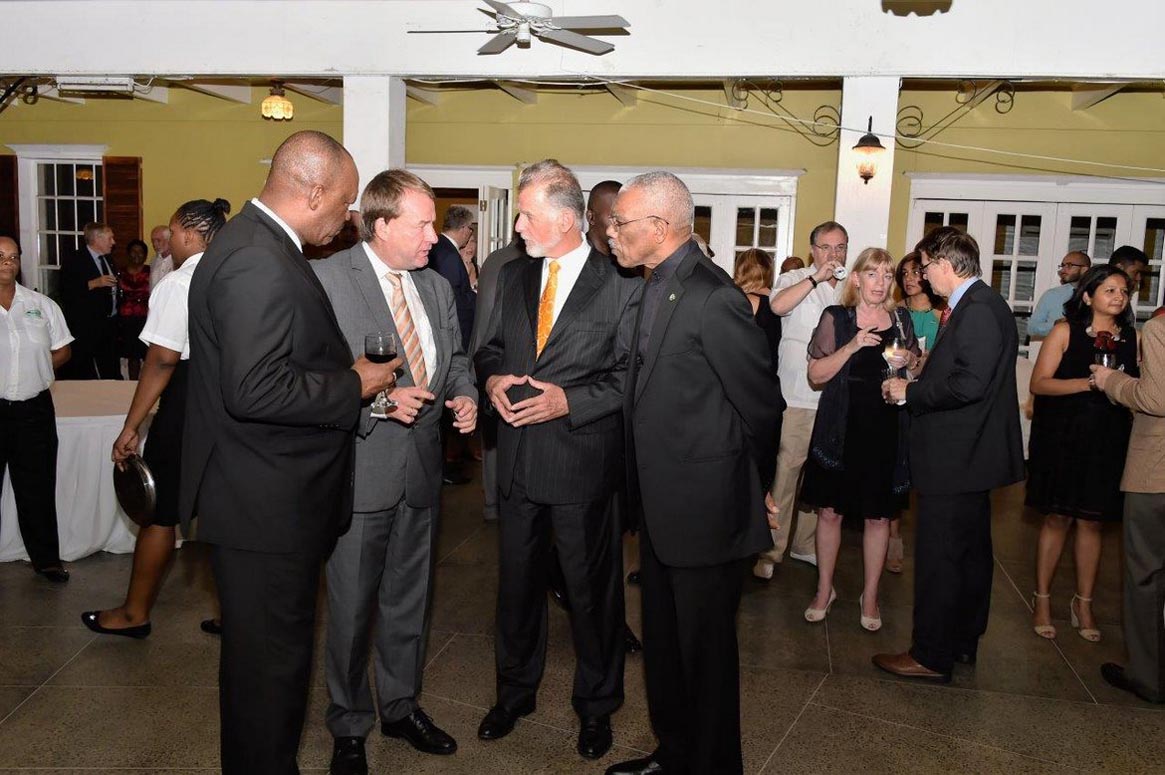 “We all know that the countries of the Caribbean, the islands but also the countries with low lying coastal territories will be greatly affected by the consequences of climate change.  Our joint project, bilateral and regional, is strongly influenced by these effects,” he said. Mr. Lamle also expressed Germany’s commitment to protect and promote the interest of Caribbean states when that nation takes over from China at the end of the year as chair of the G20 for 2017.

Germany’s Ambassador to Guyana, Mr. Lutz Hermann Gorgens said that Germany/Guyana relations have come a long way from the handing over of 400 transistor radios for schools all over the country when Guyana gained its Independence in 1966 to today as Germany’s supports the country’s green agenda.