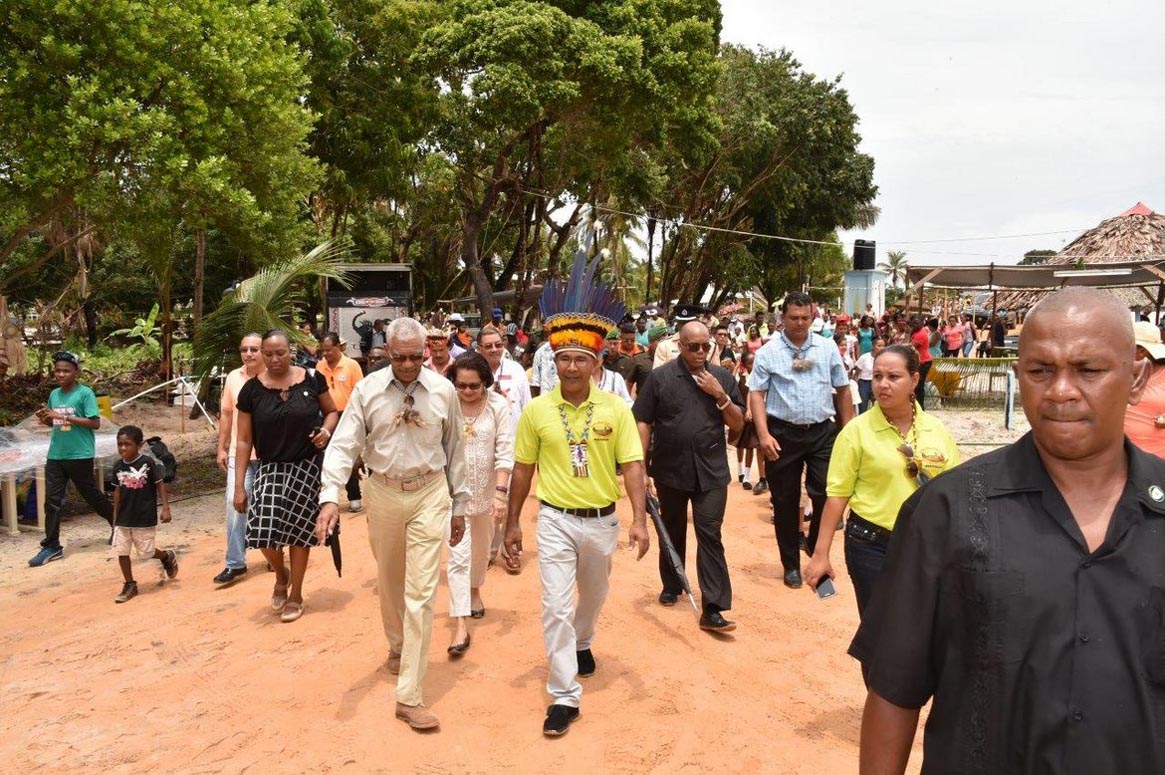 Georgetown, Guyana – (September 10, 2016) President David Granger said that the time is ripe for all Guyanese, including the nation’s first peoples, to work together with their elected leaders at the central, regional and municipal levels to convert promises into performance and to transform potential into prosperity. The Head of State was at the time delivering the feature address at the opening of Indigenous Heritage Day celebrations at Mainstay/Whyaka Village, Pomeroon-Supenaam (Region Two), earlier today.

“When we speak about government, we don’t only speak about Central Government. We also speak about regional government and municipal government and these three forms of government have to work together to improve the conditions of all of our people,” the President said at the event, which was also attended by First Lady, Mrs. Sandra Granger, Minister of Indigenous People’s Affairs, Mr. Sydney Allicock, Minister within the Ministry of Indigenous People’s Affairs, Ms. Valerie Garrido-Lowe and Minister within the Ministry of Communities, Ms. Dawn Hastings-Williams.

The President said that while Guyana’s Indigenous Peoples’, who account for 10.5 percent of the country’s overall population, have made significant strides over the last 50 years, there is still much more to be done to remove the existing gaps and eradicate inequality in hinterland communities. “We have to make a choice between progress and prejudice. We have to make a choice between integration and segregation, and once we make that choice, we have to work strenuously to ensure that our people all over the country receive the benefits of this great country,” President Granger said.

The Head of State emphasised the importance of education and reminded that it is the only means through which the transformation that the country badly needs, can be fully realised.

Education, he said, must extend beyond the mere classroom setting and must include Information Communication Technology (ICT). He said that the Government is committed to ensuring that every public building particularly schools, hospitals and airports, will be equipped WIFI.

Speaking on job creation and enterprise, President Granger said that citizens should aim at fulfilling employment in Guyana. He explained that, “we want to see more entrepreneurs in Guyana…people who work to buy things will always be at a disadvantage to those who make things and sell them.” 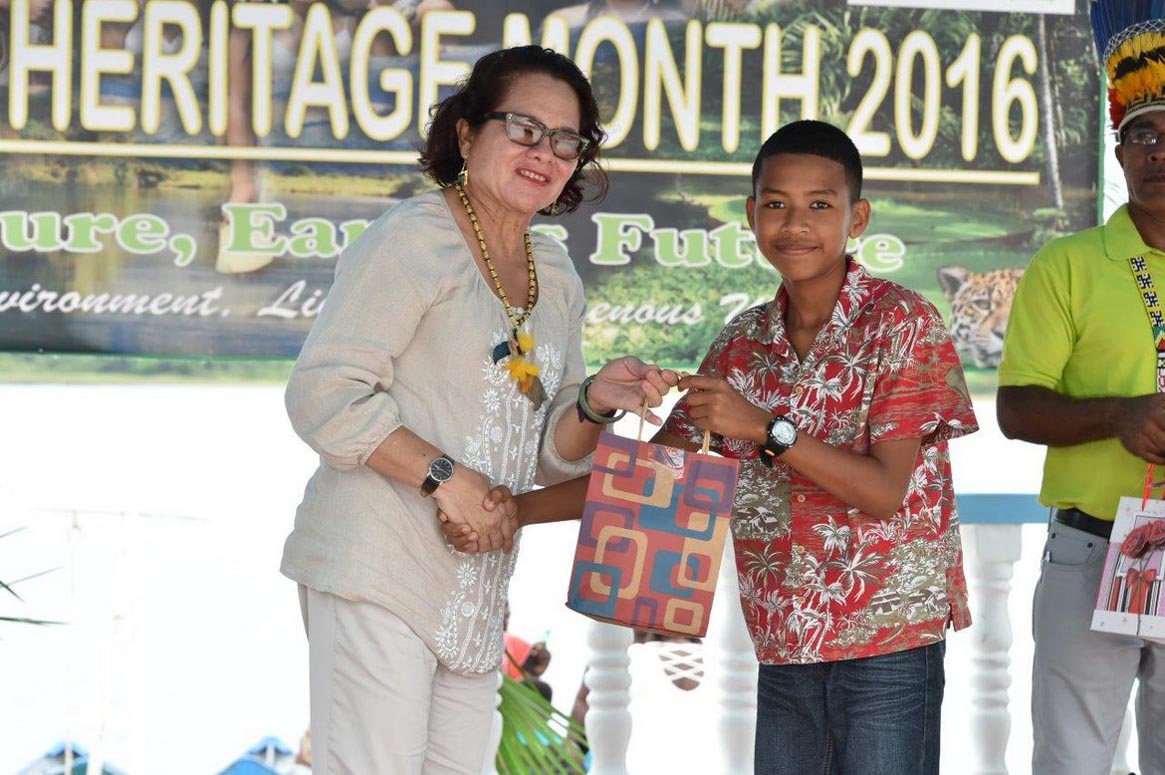 The President urged that even as Government worked to establish a more enabling environment for entrepreneurs, that residents aim to invest their resources in value-added production, making use of what they cultivate on their farms. He also spoke about the opportunities that exist in sustainable energy production. “Power is all around us; the wind can generate power, the water can generate power. So this and future years, let us make use of the sources of generating electrical power. We have not done enough and many of the regions occupied by the Indigenous peoples suffer first and suffer the most because these fossil fuels are much more expensive,” he said. 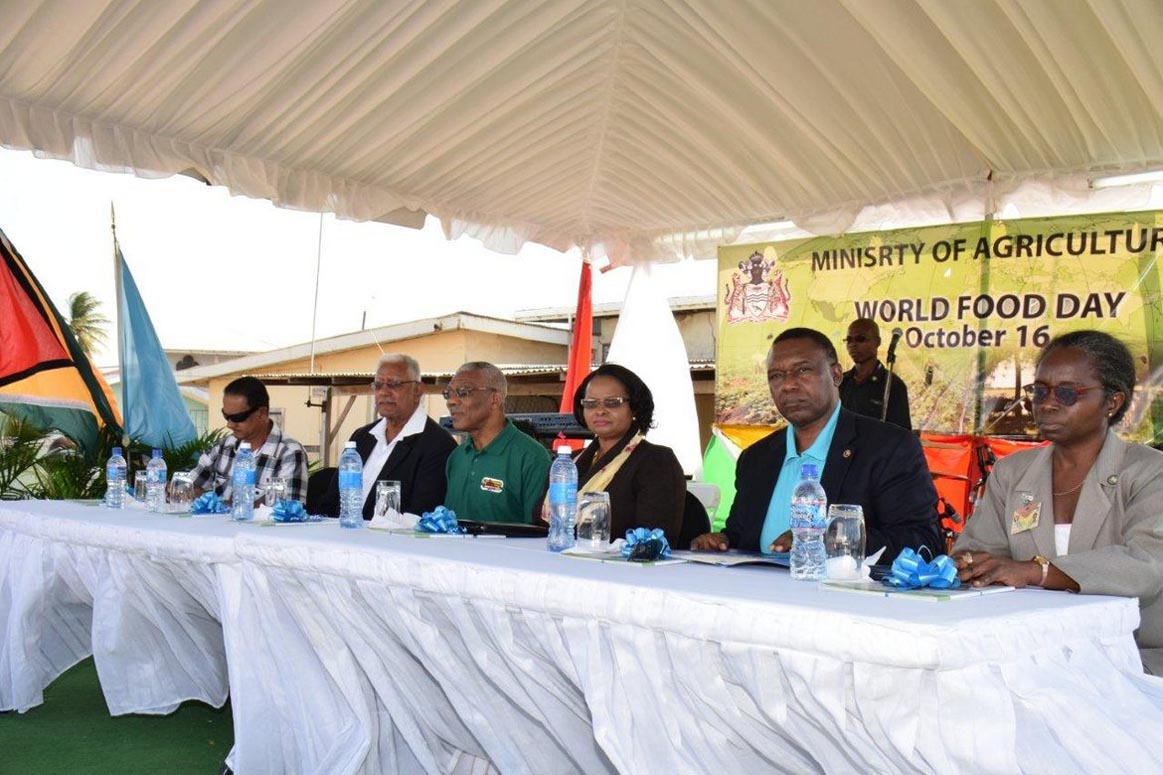 A section of the gathering seated under a tent

Turning his attention to the theme of this year’s Indigenous Heritage Month celebrations “Our Culture, Earth’s Future-Saving the Environment, Live the Indigenous Way”, the President reminded that future depends on the decisions that are made today. In this regard, he informed that his Administration will be working with all relevant stakeholders to revise the Amerindian Act, which will now be called the Indigenous People’s Act. He also informed that the Government is committed to the establishment of a lands commission to ensure among other things, that there is equity in the distribution of lands.

Meanwhile, Minister Allicock urged residents to widen their horizons in terms of their economic activities. He called on the Toshao of Mainstay/Whyaka, Mr. Joel Fredericks to resume negotiations with the Amazon Caribbean Guyana Limited (AMCAR) with regard to cultivation and processing of pineapples.

“This project can be resuscitated and can become the guaranteed market for pineapples from Mainstay/Whyaka and other villages such as Capoey and Tapacuma… I expect that in the not too distant future, Ms. Marsha Williams will be appointed Community Development Officer for this area because we need that sort of support to be able to get the work done,” the Minister said. A pineapple processing factory, which is located in the village, is currently sitting idle and Minister Allicock said that a new agreement with AMCAR will be mutually beneficial for both the villagers as well as the investors since the Mainstay/Whyaka has vast agricultural potential. 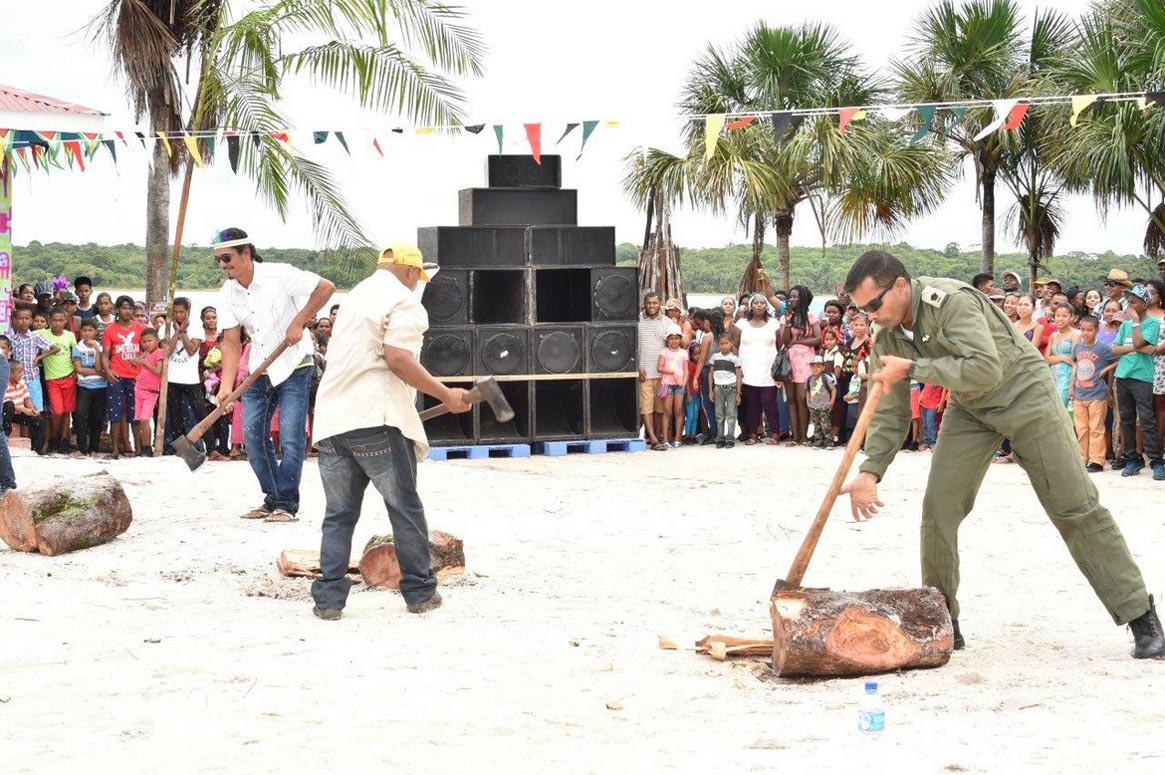 The Minister added that by celebrating their heritage and showcasing their art, crafts and food, Indigenous Peoples are honouring the rich legacy of their forbearers, noting that Indigenous Peoples have made and continue to make a strong contribution to Guyana’s development, particularly as it relates to protection of the environment.

“Indigenous Peoples of Guyana have a strategic place in society. We have the proud record of preserving the environment for centuries. We have the proud record of being people, who historically have been self-sufficient… We have a record of being capable in doing things for ourselves and in being able to be qualified in various disciplines once we are given the opportunity. The time is now and the Government is ready to give you that support,” he said.

Toshao of Mainstay/Whyaka and Chairman of the National Toshaos Council, Mr. Joel Fredericks said that his residents are prepared to work with the Government to tourism and agriculture, the two economic pillars on which the village stands, viable.

The Village Day celebration has always been one of the most anticipated events on the Indigenous Heritage Month calendar. Each year, a different village is chosen to be the host. Apart from entertainment, it showcases Indigenous crafts, food and medicines. This year’s Village Day celebrations include a bonfire and a beauty pageant. The activities will conclude tomorrow evening.

For the remainder of the month, the Ministry will be hosting an Indigenous Heritage Art Exhibition at the Castellani House, educational lectures in various schools and Indigenous Games which is slated for September 16 at the Demerara Cricket Ground.