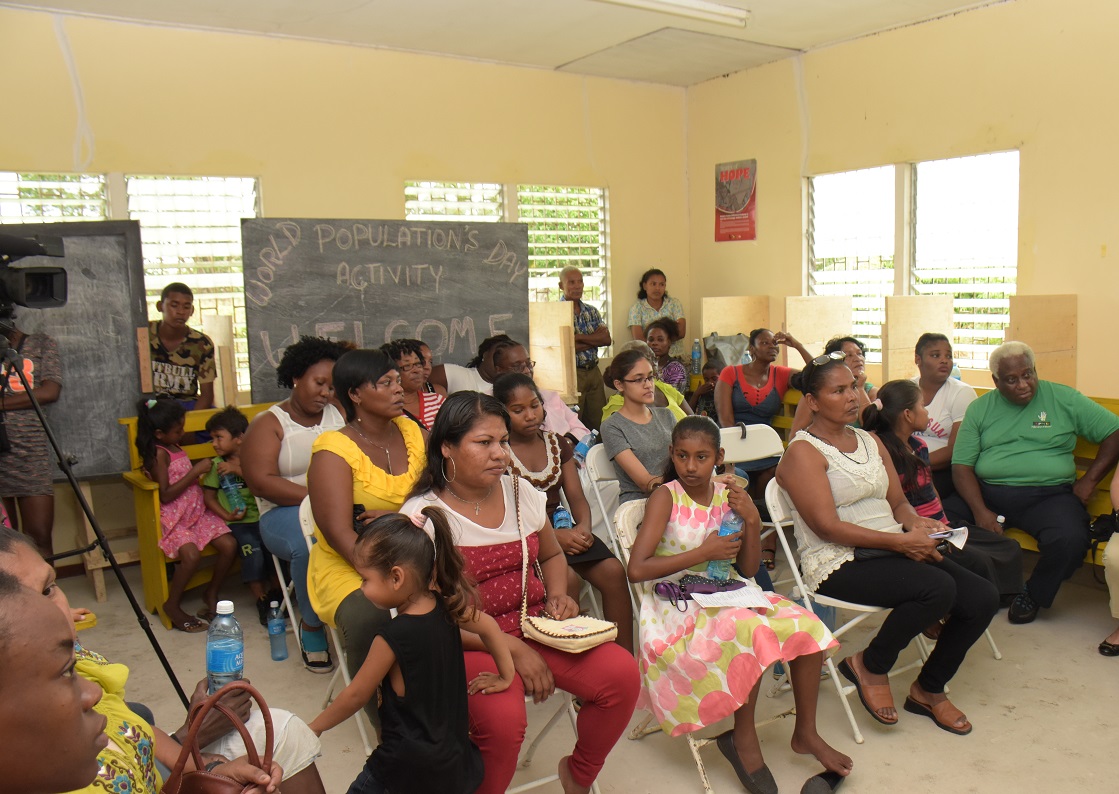 Mabaruma, Guyana – (September 9, 2016) President David Granger said that nothing is worse than having a child grow up without an education. He was at the time speaking to residents of Mabaruma, Barima-Waini (Region One), where he commissioned another 30-seater school bus. The vehicle was donated by the Guyana Bank for Trade and Industry (GBTI) to the President’s Boats, Buses, Bicycles + Breakfast and Books ‘Five Bs’ programme.

President Granger said that his Government is deeply committed to developing human capital, as this is the only way to secure the country’s future. He explained that the idea for the now overwhelmingly successful ‘Five Bs’ programme came directly from the grassroots in communities across the country, moreso in the hinterland, where many residents were forced to spend thousands of dollars in transportation costs to get their children to school.

“We found that one of the greatest needs is for children to get to school; we found that over 4000 children drop out of school every year in Guyana, we found that the lowest education grades in the country were in the hinterland. In some Regions 90 per cent of the children fail English and Mathematics at the National Grade Six level. We are not happy with this,” President Granger said. He informed that his Government has adopted the motto of “every child in school” and called on the Regional and Municipal administrations and residents to adopt that motto. The President assured that on the part of Central Government, all of the necessary measures will be taken to improve access to education, which he described as one of the greatest impediments to the development of far-flung communities.

The 30-seater school bus that was donated to the ‘Five Bs’ programme by the Guyana Bank for Trade and Industry (GBTI).

“Education is the best thing that can happen to a child. We have too many dropouts, too many low grades and we are confident that once children get to school they will become better educated and have a better chance at a bright future… We must have an educated nation. That is the starting point,” the President said. He also called on parents and community members to take a firm stance against truancy, noting that failure to do so would be a disservice to Guyana.

Speaking on the issue of unemployment, President Granger reminded that Barima-Waini is one of the richest regions in the country in terms of agricultural potential. He told the residents that, “if we use our potential; use our resources, we will find employment right here.”

Responding to criticisms that the Government is abandoning youths, the Head of State said that nothing could be further from the truth, but rather Government is focused on empowering young people so they can be their own job creators. He said his Administration has introduced the Hinterland Youth Employment Services (HEYS) programme and the Sustainable Livelihood and Entrepreneurship Development (SLED) programme, which to date, have benefited hundreds of young people.

He said that youths can earn a comfortable living in their respective regions, if they become entrepreneurs and explore the opportunities that exist in agro-processing. He noted, however, that youths will only be able to succeed in this respect if they have a sound education, which must involve information technology. “There is profit in business, there is success in business, there is independence in business and there is development in business, so I want to encourage you to be entrepreneurs and you can do so by becoming more literate,” the President emphasised.

With respect to the infrastructural challenges that the region has been facing, he reaffirmed his Government’s commitment to fixing the roads in the region and the ferry, which would open up the region and boost economic activities. 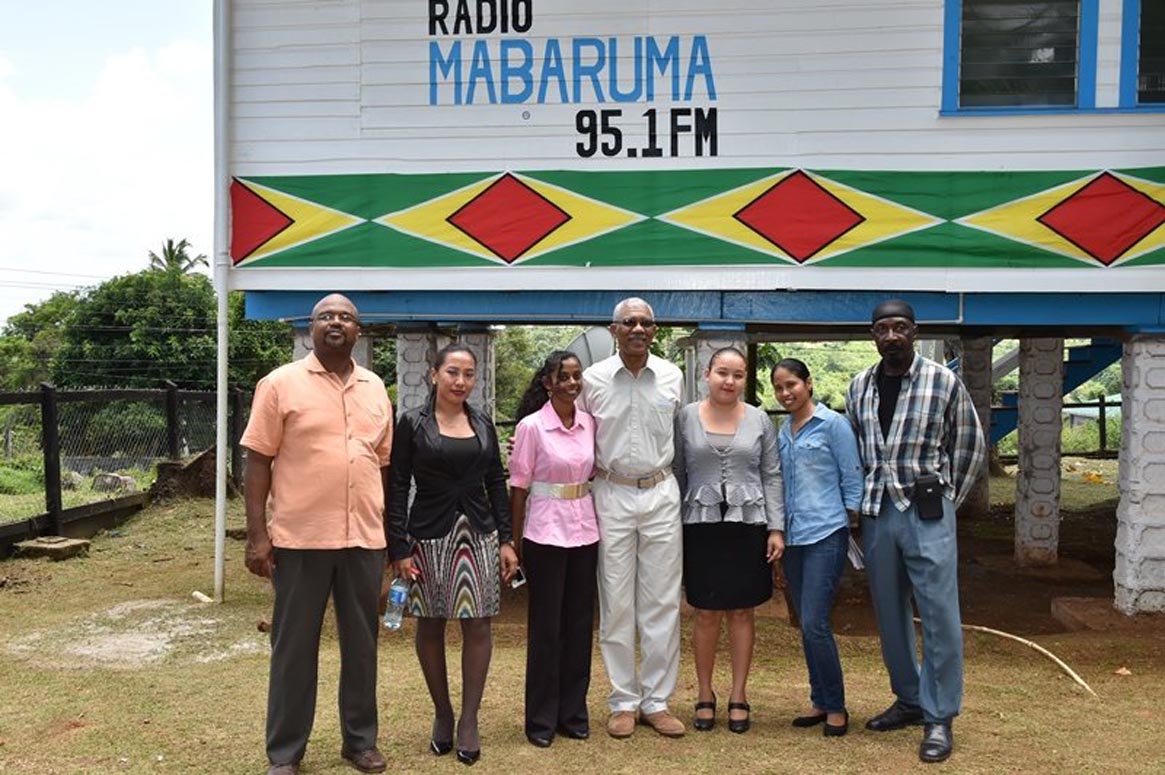 President David Granger with staff and volunteers of Radio Mabaruma

Meanwhile, Minister Ally, whose Ministry has been wholly responsible for the coordination of the ‘Five Bs’ programme, said that this is just one of many interventions by the Government to bridge the gap that exists between the hinterland and the coast. “Access to education must not be seen as a privilege for some, but as a basic human right for all… Education empowers people with the skills and knowledge they need to contribute to building the nation… Without targeted investment in our children, the prosperity and future of the nation will be at stake,” she said.

She also expressed Government’s appreciation to its corporate partners, without whose support the ‘Five Bs’ programme would not have been the resounding success it is today.

Regional Chairman, Mr. Brentnol Ashley, in his address, told residents that it is high time they work together to remove the religious and political barriers that prevent them from moving forward together as a Region. He lauded the President’s vision for education, which is clearly demonstrated in the ‘Five Bs’ programme but urged parents to play their part as well. “All must get on board for us to move forward… This is a season for healing and to make this Region a better place,” the Regional Chairman said.

Ms. Kelly Pierre, a resident of Region One, who attended the commissioning ceremony, said that children from as far as Kamwatta have to travel to Mabaruma to attend school and it costs parents more than $1000 per day in transportation alone. This bus, she said, will greatly ease the financial burden on parents.

She also spoke of how encouraged she was at the President’s call for residents, particularly young people, to use their abundant resources to become entrepreneurs. She said youths need to stop looking at migration out of the region as the only alternative to earn a living.

The ‘Five Bs’ programme started a little over a year ago and to date it has already touched the lives of children in all 10 Administrative Regions. A total of nine boats, 12 buses and hundreds of bicycles have been distributed thus far.

Following the commissioning ceremony, President Granger visited Radio Mabaruma, the first community radio station in the Region, which was commissioned in June. The President sat down for an interview with two volunteer community broadcasters and Assistant Manager in the Production Department at the National Communications Network, Ms. Michella Abraham-Ally on the station, which is broadcast over the 95.1 frequency.

Caribbean Leadership Project to kick off on September 12 -Permanent Secretaries, senior government managers to be trained