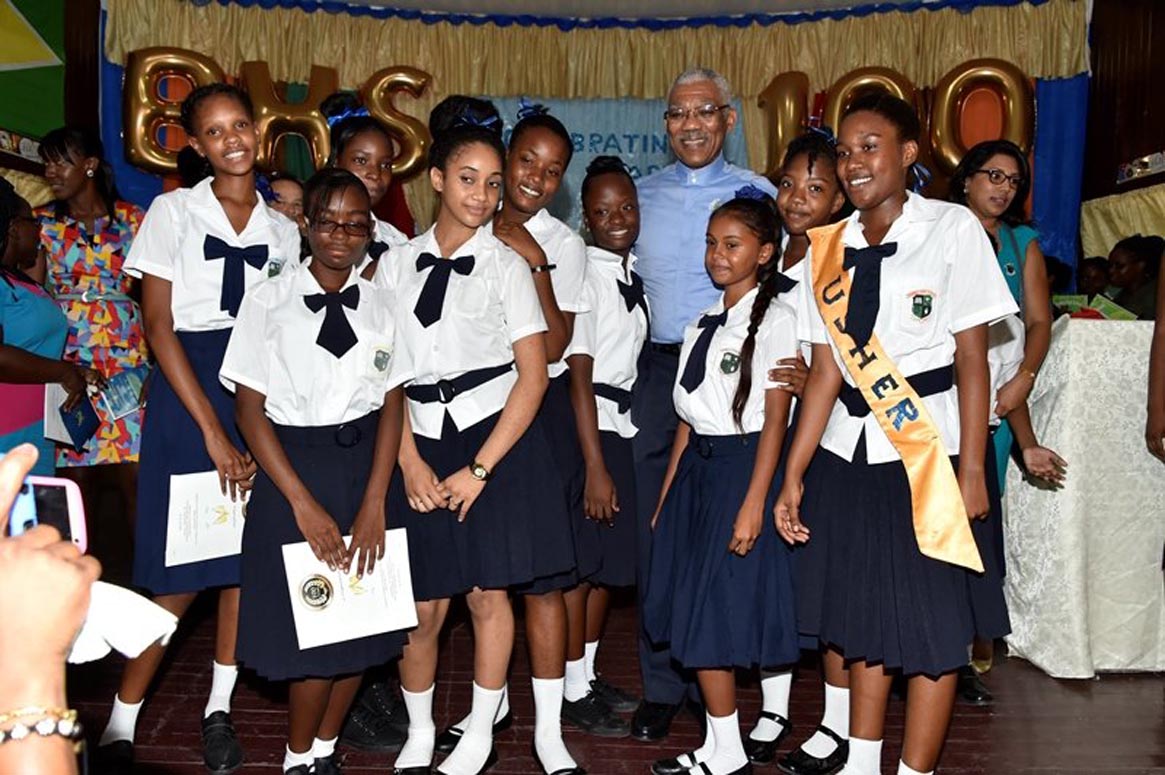 Georgetown, Guyana – (September 5, 2016) President David Granger, today, pledged an initial $1 million to boost the Berbice High School’s (BHS) computer laboratory as he noted that an education founded in in the Sciences, Technology, Engineering and Mathematics (STEM) subjects is key to innovation and transformation of the country. The President was at the time speaking at the centenary anniversary celebration of the Berbice High School, which was observed today under the theme: “Seizing the opportunity to train and build a cohesive society.”

Addressing a packed Berbice High School auditorium, which included Ministers of Government, members of the BHS Alumni, teachers, parents and students, President Granger told the gathering that education must aim at producing persons of quality, who can be integrated into adult society. Education, at the secondary level, must edify the mind, elevate values and enhance skills, he said. In this regard, he added that STEM subjects play a major role and ought to be embraced.

“Education can achieve these ends only if it embraces certain values and standards. I identified two elements; tradition and transformation. The School ought to embrace innovation. This is the driver of global competiveness… Guyana’s capacity to compete in global markets will rely on our ability to innovate. Innovation requires that greater emphasis be placed on education, particularly STEM education. The greatest innovation in the global economy is in the scientific and information technology fields. STEM education must be emphasised from an early age if we are to develop the skills and attitudes necessary to foster transformation,” the President said.

President David Granger with some of the students of the Berbice High School at the school’s centenary celebrations earlier today.

At this point, the President pledged a sum of $1 million to help to boost the school’s computer laboratory, as he further committed ensuring that support is provided for further development in the coming years. With President David Granger’s pledge to ensure Internet access to citizens across Guyana, free of cost and investment in the technology field, the Berbice High School is now a beneficiary of Internet access, courtesy of the eGovernment Agency. The service was installed over the last two weeks and will now be able to facilitate the delivery of the National Centre for Education Research and Development’s (NCERD) new STEM curriculum.

Plans are also in the pipeline by the Government to provide laptops to all the teachers, who had not benefited during the distributions made under the One Laptop Per Family platform operated by the previous administration.

President Granger noted that education will transform the East Berbice Corentyne region, a region which is bigger than most Caribbean islands.

“This Region is larger than Belgium or Belize, three times the size of Jamaica and five times the size of Trinidad and Tobago. This Region is rich in resources but it has not been able to convert this potential into economic prosperity for the last one hundred years. The present generation must reverse this situation. It is up to you. Do not rely on the Alumni… The Region, given its diverse landscape; coastal plain, rainforests, savannahs and wetlands, can lead the development of a ‘green’ economy while, at the same time, securing the good life for all of its citizens,” the President told the students. 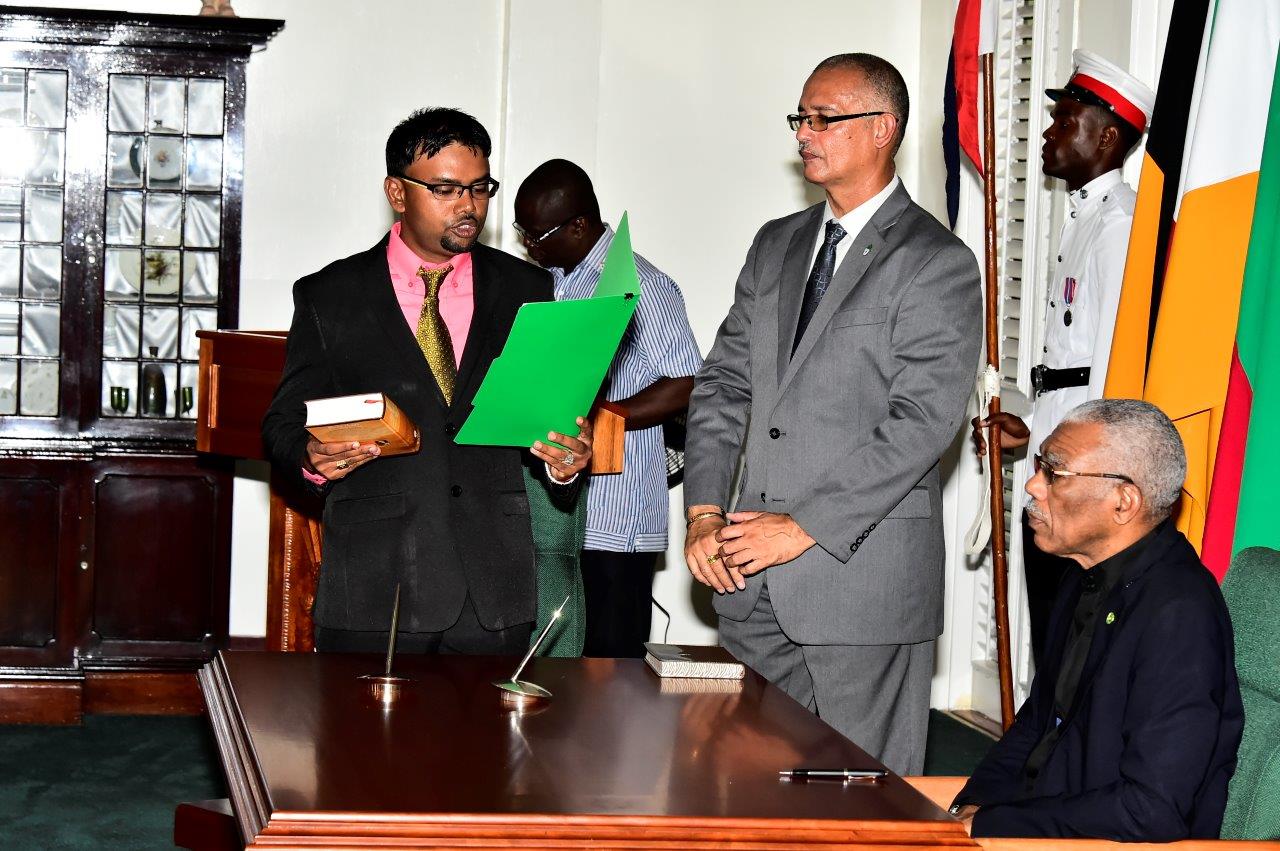 First Lady, Mrs. Sandra Granger sticks the celebratory cake with the oldest member of the alumni present at the ceremony today; Mr.Norman Semple (Class of 1942)

In the meantime, the President said that as the school celebrates its 100 years of existence, it has been the embodiment of both family-based religious tradition and the education of young men and women. This pattern, he said started in the 19th century, flourished in the 20th century and continues to transform citizens’ lives today in the 21st century.

“One hundred years ago, the parents of the children of East Berbice-Corentyne understood that and were convinced of the worth of education. They were eager, because of this conviction, to enroll children in a secondary school, often at great personal sacrifice. Education, they understood, was the gateway to increased opportunities and a better life. Knowledge, they knew, would provide enlightenment and liberation from ignorance. Education would equip their children with the skills and values needed for personal development…The Berbice High School was one that survived. It was founded in response to the growing demand for a better life and would become the bellwether of secondary education in the County of Berbice,” President Granger said.

The School was the first secondary school to be founded in the county and, for 100 years, it has remained a leader in secondary education, President Granger said. He noted that BHS unlocked doors that were previously closed to poor families and it unveiled the potential of students of this Region, unfolded new opportunities for them in society. “Berbice High School was established with the expressed purpose of preparing students for the important tasks of life. It has now accumulated one hundred years of service to this county a proud reputation and tradition of excellence. The school was a beacon of academic distinction. It produced some of Guyana’s most eminent citizens,” the Head of State expressed.

This centenary, therefore, the President said, must set the stage for perpetuating the traditions, which have long been associated with BHS’s golden years. Those golden years are not a matter for nostalgia or memories but must be relived every day to create new opportunities, the President told the students and teachers alike.

“BHS, equally, must continue the process of transformation, which kept it resilient and responsive to the Region’s changing circumstances. You, students are the heirs of one hundred years of BHS traditions, values and standards. I urge you to educate yourselves about this School’s traditions and to emulate the successes of the scholars, who passed through its doors. I urge that, by your ardour, behaviour and demeanour, you declare to the nation that you are a student of a school with an excellent scholastic tradition and a solid moral foundation. I urge you tell present generation to embrace the standards and values, which have brought acclaim to the School over the past one hundred years,” he said. 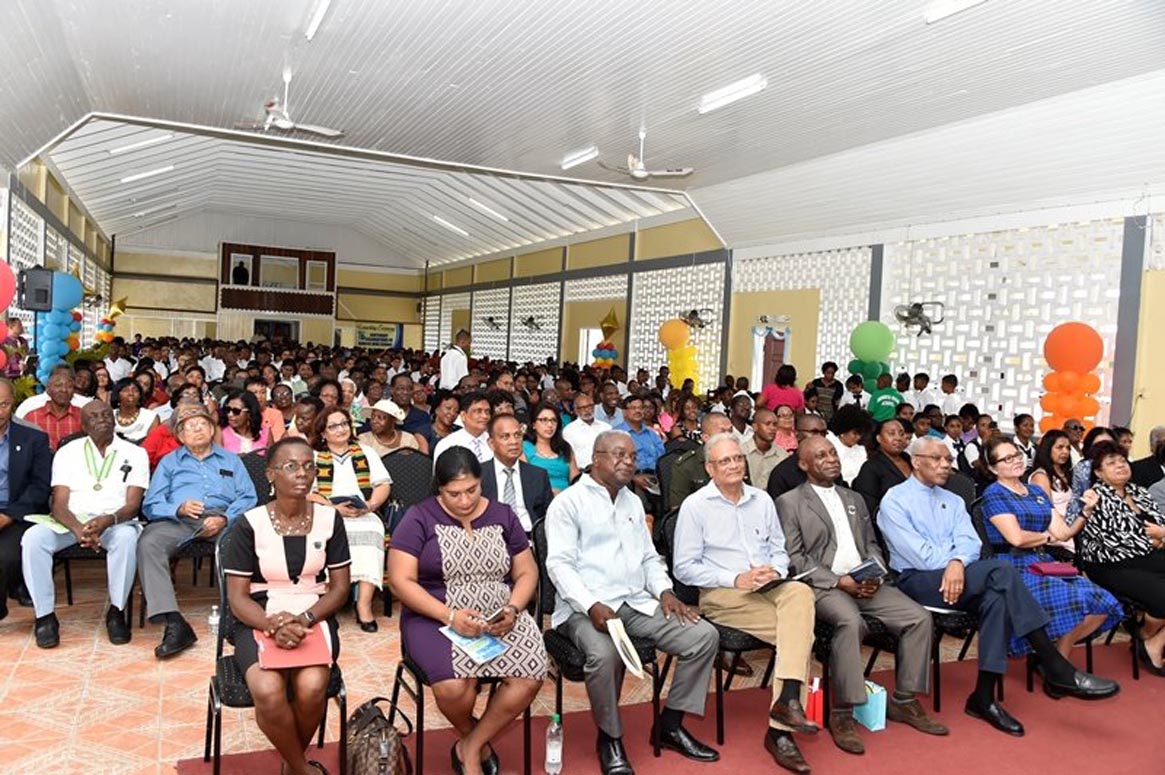 A section of the gathering at today’s centenary celebrations of the Berbice High School.

Head Mistress of the school, Ms. Tracey Heyliger in her remarks, said that while the school is an old institution with strong principles, simultaneously, it is a lively institution where development is continuous and where diligent teachers continue to service the system, moulding the nation’s children.

“The use of information technology as well as various teaching strategies has been the main reason, the Berbice High is the top school in this region. It has moved up from seventh last year to fifth this year nationally. With an 89.2 percent passes in Grades One to Three including both English Language and Mathematics and it is known to be one of the most disciplined schools in Berbice. We have a high standard of discipline,” she said.

Education continues to underpin the President’s development policy and he has focused heavily on keeping children in school since his assumption to office. The widely successful ‘Five B’s; Boats, Buses, Bicycles, Books plus Breakfast’ programme, aimed at ensuring the hindrances to school attendance are removed has already begun to pay dividends.

Mr. Gavin Mahadeo, a teacher at the school expressed gratitude to the President and the Government of Guyana, for the implementation of the ‘Five B’s’ programme, which he said, has helped the school and its students significantly. He noted that there is a school bus, which takes students to and from school every day, while a number of students have benefitted from bicycles under the programme. Mr, Mahadeo noted that there has been a significant improvement in attendance and by providing what may seem like a small thing to some, the President is making a significant impact in the Region.

Meanwhile, Dr. Grantley Walrond, Chairperson of the Organising Committee for the Centenary Celebrations of the Berbice High School, in his remarks, said that the school excels not only in academia and sports, but has been pushing social cohesion, an area which the President himself, has been advocating since his assumption to office, lack of which, Dr. Walrond said, continues to stymie the growth and development of this country.

“But the question is, how did we get here? We the intellectual society, the privileged products of the Berbice High School, the Queen’s College or Bishop’s let Guyana down and left it to the wiles of those [for whom] any strategy is fair game for as long as it confers power advantage. A recent survey identifies race and ethnicity as the biggest challenge to human relations, security, social, political and economic development. This cannot be news but yet for most of us race and ethnicity must only be discussed in the confines of our homes or clubs with friends or associates who we think we can “trust” while there continues to be mistrust in other sections of the society,” he said.