‘Concerted action must be taken to protect Indigenous customs, heritage’ 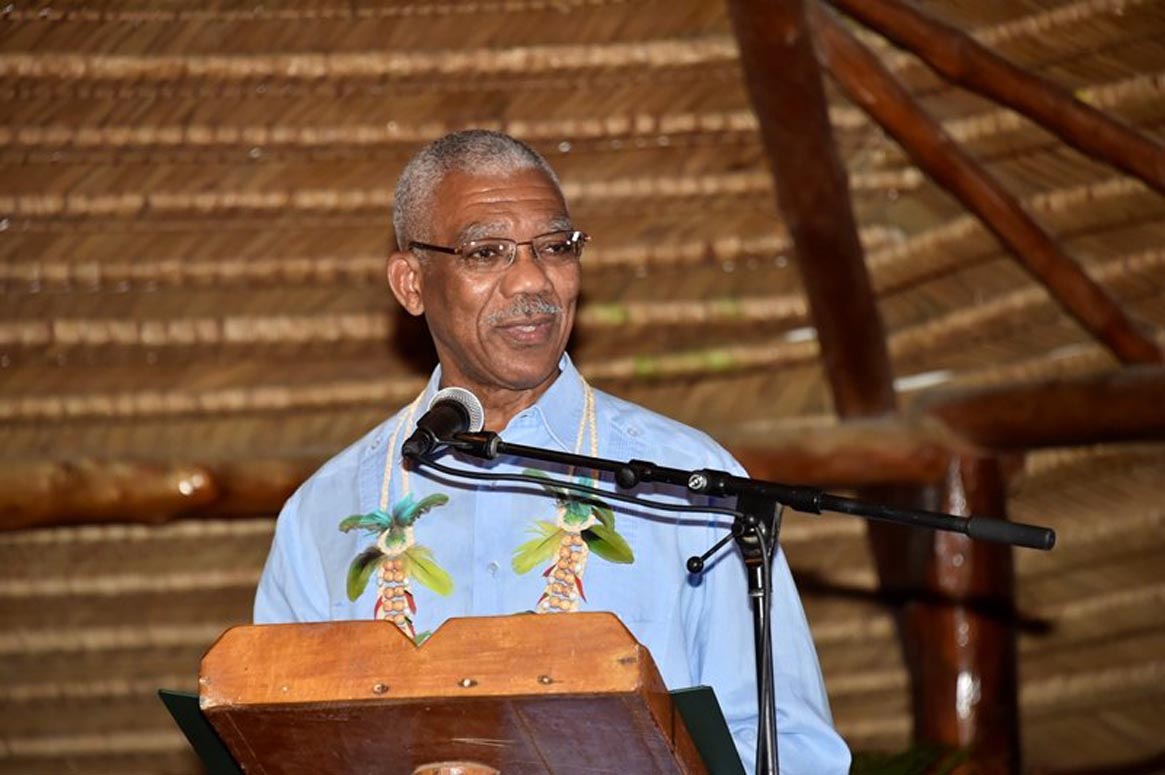 “Indigenous Heritage Month is a celebration of the breadth, depth and wealth of Guyana’s Indigenous cultures.  It is a month to savour our diversity. It is a month to take concerted action to preserve, protect and promote the rich customs and traditions of the Indigenous peoples – the Akawaio, Arawak, Arecuna, Carib, Makushi, Patamona, Wai-Wai, Wapishana and Warrau. Indigenous communities are the repositories of the cultural heritage of our first peoples. The protection preservation and propagation of values and traditions and way of life of Guyana’s Indigenous peoples, therefore, must take place within the Indigenous villages and communities.  The cultural heritage of our Indigenous communities, unfortunately, is under threat,” the President told the large gathering.

President David Granger addressing the gathering at the launch of this year’s Indigenous Heritage Month.

The President noted that the slow pace of economic growth threatens communities’ cultural heritage as limited economic opportunities over the past two decades have caused social distress and migration. Communities, he said, have lost some of their human capital through the migration of persons to neighbouring countries in search of employment.

“Social problems have increased. We know that educational standards in hinterland communities lag behind those of the coastland.  Vector borne diseases take a toll on human health. Environmental degradation caused by mining and logging affects the hinterland more than anywhere else. Rivers have been polluted. The infrastructure – aerodromes, bridges, roads and stellings – is inadequate. In some cases there has been alcoholism, abuse of girls, trafficking in persons and as a result, the quality of life in many places in the hinterland has deteriorated,” he said. 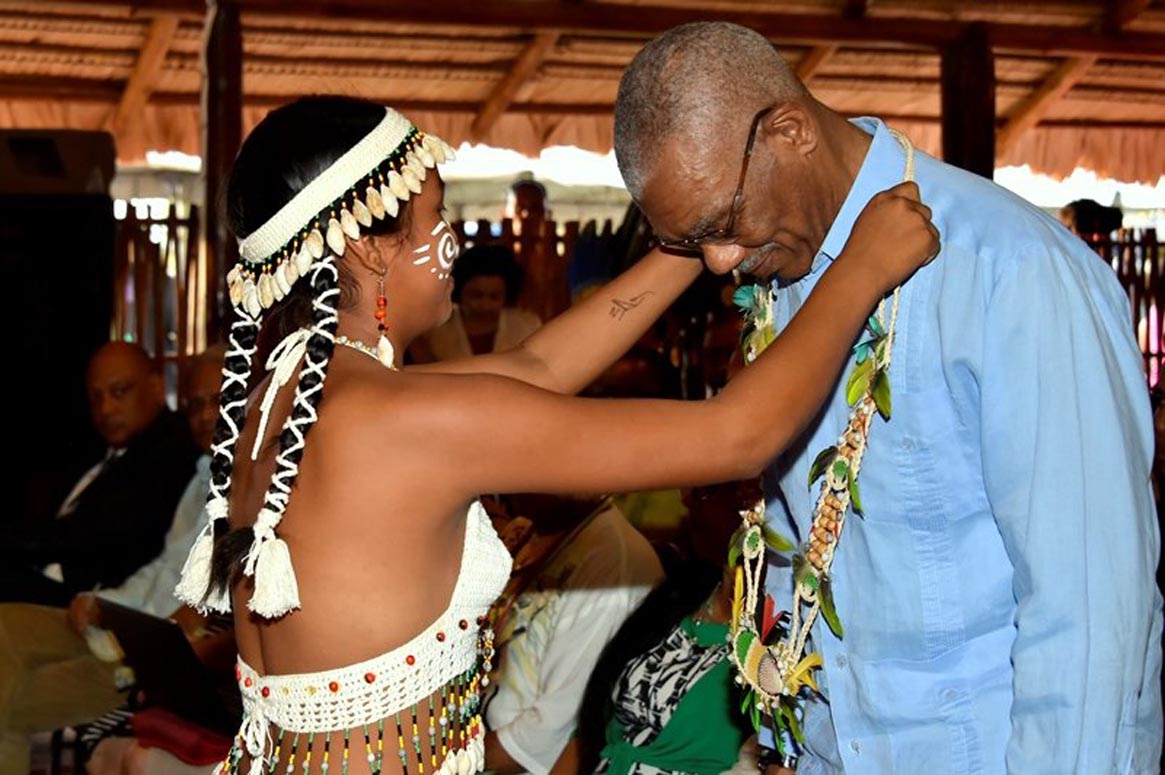 An Indigenous girl garlands President David Granger at the National Exhibition Centre at the launch of Indigenous Heritage Month.

The Head of State noted, however, that the Indigenous peoples are custodians of the patrimony of the country’s hinterland and protect the natural assets through their intimate relationship with nature and through sustainable agriculture, fishing, forestry, hunting and mining. However, their customs, passed down over centuries, can be preserved and protected only if cohesive communities are built and are free from the threat of social decay, economic decline, the President said.

To help solve these problems the President said that Indigenous communities need very strong structures of government. However, because of the small numbers of some communities and the great distance between them, it is difficult to give them the type of governance they need and deserve, he said. The threats, if left unchecked, could hasten disintegration and hinder the ability of Indigenous communities to propagate their values, traditions and way of life. 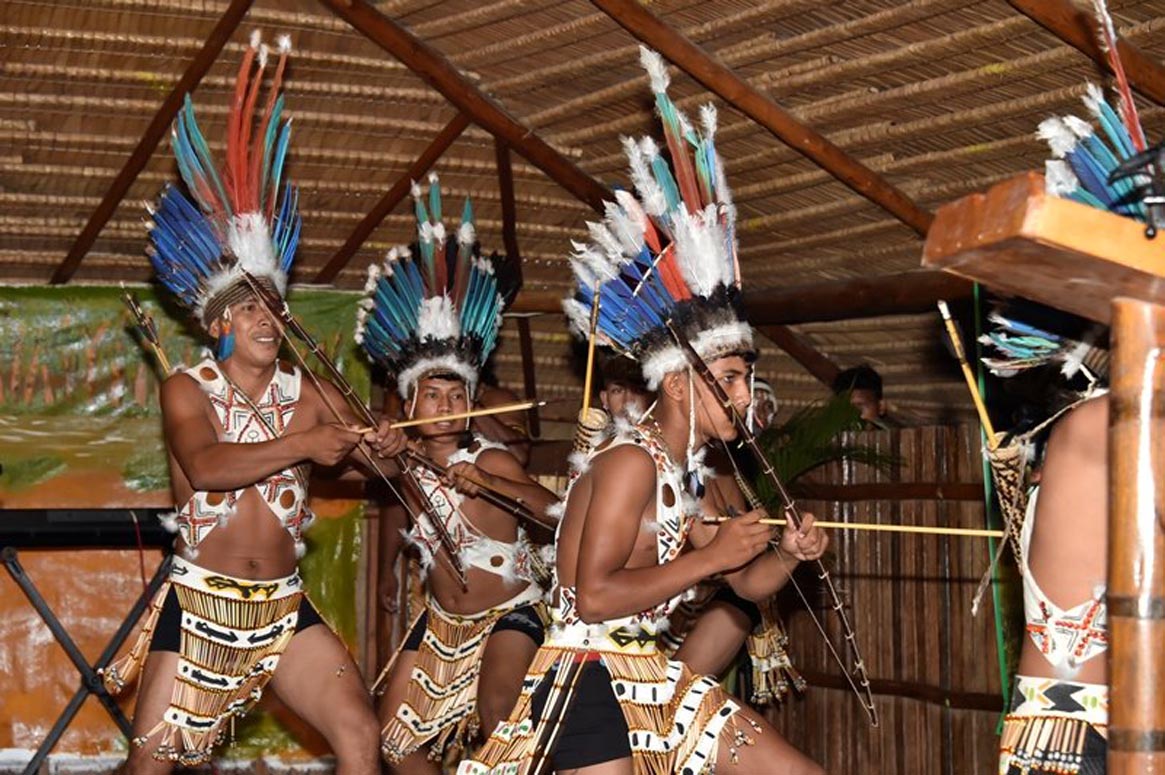 One of the performances, which was put on display at the launch this evening.

The President noted that while the NTC meets once a year and some of its decisions could remain unimplemented if there is no executive agency to advance them and while the NTC is now in the process of establishing a permanent secretariat, the President is of the view that a single annual conference cannot provide the structure or capacity to effectively execute the day-to-day management needed to address the myriad problems facing Indigenous communities.

“Village Councils might not possess the organisational structures, the managerial expertise and the financial resources to effectively discharge their functions. Their budgets are small and they have become dependent on Central Government grants and other forms of assistance. The three principal governance structures – the Ministry of Indigenous Peoples’ Affairs; the National Toshaos Council and the Village Councils – cannot effectively address the myriad and intense problems sweeping Indigenous communities,” he said.

Thus the proposition of National Indigenous Peoples’ Authority (NIPA), an administrative agency with a national reach, that fills the gap between the village and the Ministry and supports the implementation of policies made by the Ministry of Indigenous Peoples’ Affairs, decisions made by the National Toshaos Council and the plans of the village councils. 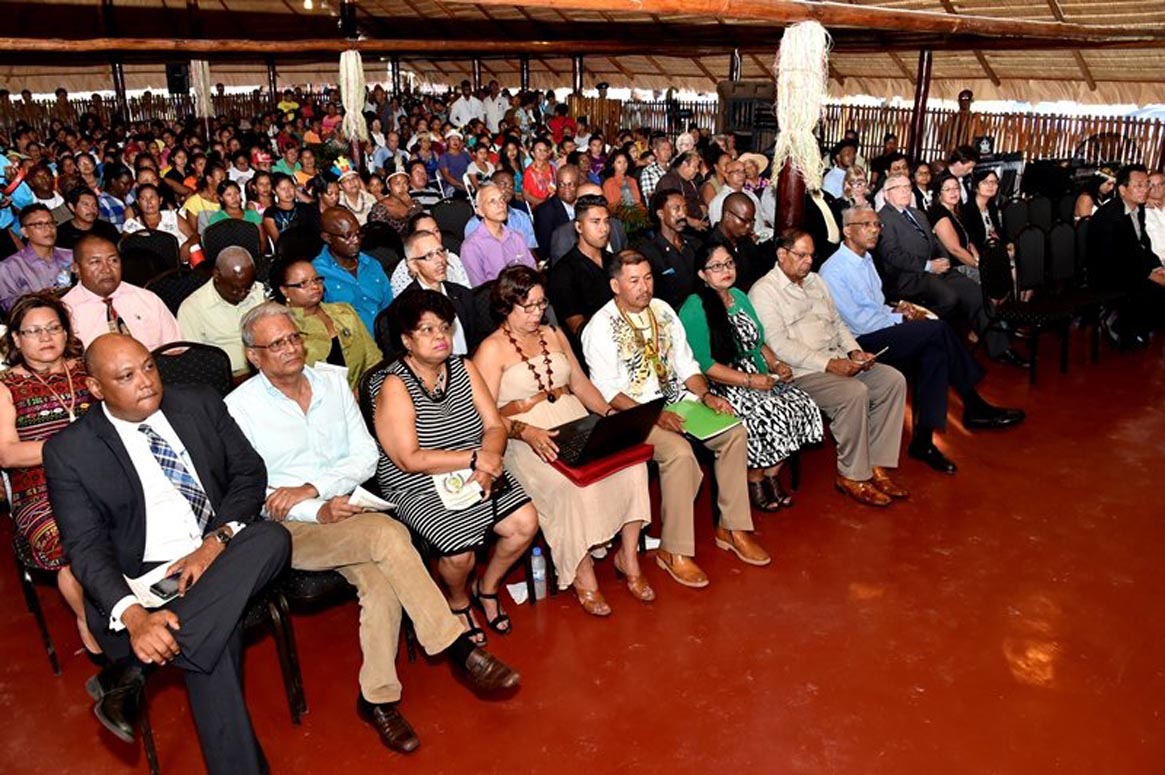 A section of the gathering at the Heritage Village at the National Exhibition Centre, Sophia at the launch of Indigenous Heritage Month.

“Implementation is the muscle of progress. Intentions remain mere words without implementation. Governance structures to address Indigenous peoples concerns need to be complemented with greater implementation capability…,” the President said.

The President also remembered the works and efforts made by Stephen Campbell, the first person of Amerindian descent, who served in the National Assembly. He noted that it is the work of Campbell and others like him, who have made this day possible and noted that it is because of their sacrifices that the preservation of culture not be taken for granted.

Vice President and Minister of Indigenous Peoples’ Affairs, Mr. Sydney Allicock, in his remarks, said that his Ministry has been working round the clock with the various Indigenous communities across the country. One of the areas work is being done, he said, is the preservation of languages, customs, traditions and way of life.

The celebration this year is being held under the Theme: “Our Culture, Earth’s Future – Save the Environment, Live the Indigenous Way” in keeping with the Government’s push for a green economy.