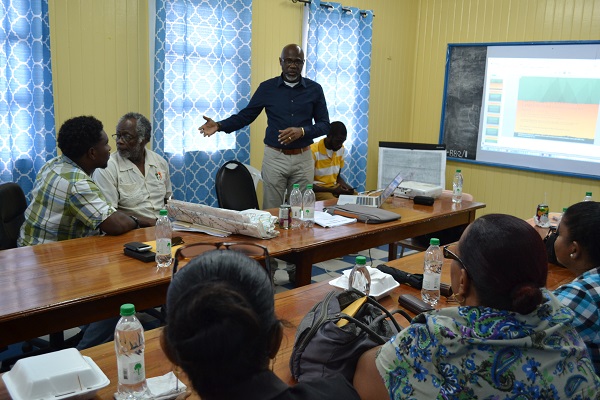 Georgetown, Guyana – (August 27, 2016) Presidential Advisor on the Environment Rear Admiral (R’td) Gary Best, yesterday, presented for consideration the proposed Green Bartica Development and Land Use Plan (GBDLUP) to Minister of State, Mr. Joseph Harmon at his office at the Ministry of the Presidency. Land Use Expert on the project, Mr. Charles Griffith, accompanied Mr. Best to the meeting.

The presentation and green developmental plan for Bartica comes at a time when Guyana has embarked on a long-term initiative to Green its Economy as strongly advocated by President David Granger. Mr. Best explained that the objective was to present “a consistent and integrated green plan to generate policies that would lead to the sustainable development of the natural capital of Bartica in order to maximise revenue generation and provision of services to the residents.” The comprehensive presentation emphasised several important facts: Bartica will set the tone of the green economy as Guyana’s first green model town, citizens will be involved in the decision making process, and that the quest for greening Guyana has and will continue to be taken in stages.

The Presidential Advisor said at the meeting that the GBDLUP has to be understood with the context of Guyana’s green economy pathway. He then traced the history of greening in Guyana by pointing to the initial Iwokrama Project, which then transitioned to the Low Carbon Development Strategy (LCDS) and now to the Green Economy. The key elements of a green economy such as, mainstreaming, alternative energies, managing and valuing natural capital, land use planning and consultation and awareness were discussed. Several main pillars of the green economy were presented which included: sustainable harvesting of natural capital, integrated planning and data management, environmental security, disaster risk reduction, financial mobilisation and technology science and innovation.

Land Use Expert Charles Griffith then presented the plan for modernising and industrialising Bartica. He said the land use plan is influenced by an analysis of the “probable patterns of global and local outcomes” and gave a background of what exists in Bartica based on a survey that was done and spoke about the importance of the industrialisation and modernisation of Bartica. The GBDLUP will see the town of Bartica being divided into North and South Bartica. Modernisation will take place through zoning in North Bartica and industrialisation, through zoning in South Bartica. Key aspects of modernisation include the construction of a modern sewer and waste water treatment system, retrofitting of current infrastructure, climate proofing of future development, the establishment of the following zones: industrial, government, business, housing, tourism, recreational, research and culture.

The industrialisation of the natural capital of South Bartica includes setting up of the following zones: mining, agriculture, piggery, factories, aquaculture, forestry and cattle. In addition a municipal airport is also proposed. All New development in North Bartica will reflect a 70-30 ratio of development to forest, while development in South Bartica will reflect a 50-50 ration of agriculture to forests. However, within the agriculture zones a 70-30 ratio of agriculture to forest will be reflected. Mr. Best emphasised the importance of maintaining and preserving all watersheds and existing creeks and further highlighted the important of vesting the lands that now make up the new town of Bartica into the Bartica Municipality. The new size of Bartica is approximately 68 sq. miles.

Minister of State Joseph Harmon was impressed with the research done and information provided during Thursday’s presentation. He gave government’s full support to ensure that all the proper studies and assessments are completed. Minister Harmon expects Bartica to develop in a national context whereby all towns can be interdependent even if Bartica itself sets the green economy tone that will be delivered countrywide.