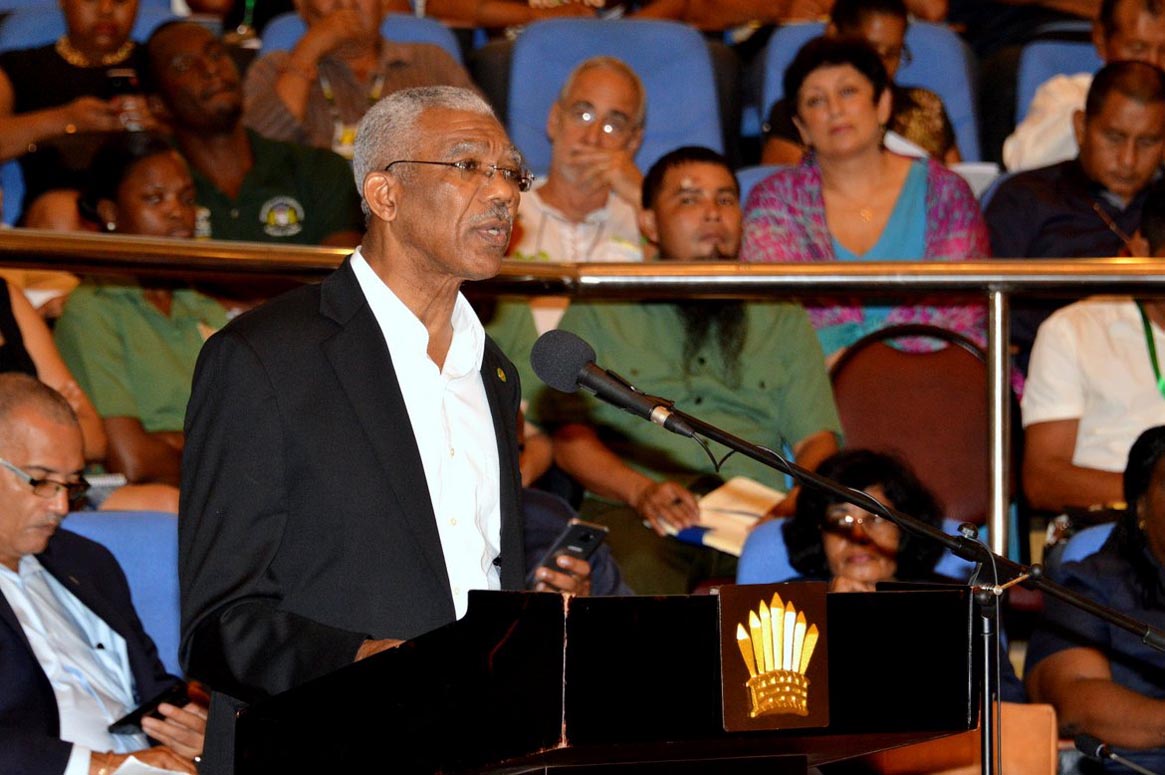 Georgetown, Guyana – (August 22, 2016) President David Granger has announced today that he will take for Cabinet’s consideration, the recommendation made by Chairperson of the National Toshaos Council (NTC), Mr. Joel Fredericks, to have a plot of land allocated for the construction of a secretariat for the Council. He also instructed the Minister of Indigenous People’s Affairs, Mr. Sydney Allicock to explore the setting up a five-member National Indigenous People’s Authority to oversee and monitor the implementation of decisions taken by the NTC and other local indigenous bodies.

This body, the President said, while speaking at the opening of the 10th Annual NTC Meeting at the Arthur Chung Conference Centre at Liliendaal, will support the work of the NTC by ensuring that an administrative body is in place year round to ensure that decisions of the Council are properly implemented. The Head of State noted that Toshaos under the Amerindian Act are empowered to deliberate on and make decisions on the resolution of a large number of problems that affect indigenous communities.

“It is… very difficult for a single annual conference to execute day to day management to these complex problems of which I have spoken about over such a vast area from North to South and East to West. The conference must therefore ask itself whether there can be a different administrative approach to resolving these problems rather than meeting once a year and not being able to monitor the implementation of your decision for 365 days,” he said.

The Head of State described a strong administrative body, with a national reach  that fills the gap between village level administration and the Ministerial level.

President Granger explained that “here on the coast, a village could look to the NDC [Neighbourhood Democratic Council] and the NDC can look to the RDC [Regional Democratic Council] and the RDC could look the Ministry of Communities and to the National Assembly” and asked “Is there a parallel system for what is in effect, is a parallel form of administration of our indigenous villages?”

He said that the time has come to look at the setting up a body, which possesses the resources, the financial and managerial skills and the organisational structures to effectively address the myriad of challenges, which residents face. “Sometimes we make decisions and we implement measures, which are intermittent and episodic; a donation of a tractor here, an ATV there, a generator, a solar panel, but taken as a whole they have not succeeded in creating the quality of life which we expect for all Guyanese.

The body will not usurp the role of the NTC or the Ministry of Indigenous People’s Affairs but ensure effective implementation of decisions taken by the Council.

He also advised that Cabinet is currently considering the establishment of Ministerial Planning Units, explaining that as it stands, the Ministries are tasked with transmitting requests and seeking solutions from one agency to another.

The Ministry of Indigenous People’s Affairs will have one such a unit and the President said that this will give it the authority to act decisively to deal with some of the burning issues that Indigenous communities are faced with.

With regard to infrastructure, the Head of State said that the hinterland residents were forced to accept shoddy work from contractors in the past and called for a fresh approach to the execution of expensive hinterland infrastructure projects such as roads, aerodromes, bridges and water supply systems among other facilities. “The notorious Kato Secondary School is only the most recent example of the low standards and poor supervision which use to pass for construction in the past…as if they are built for not only a different part of the country but a different part of the population,” he said.

Land rights issues, mining, Trafficking in Persons (TIP), teenage pregnancy, crime, alcohol abuse and other public health pandemics such as gastroenteritis, cervical cancer among Indigenous women and malaria are among the list of challenges that hinterland communities face. “I am confident that once consideration is given to the permanent nature of the NTC and the problems that you faced and continue to face on a daily basis, by the time you meet again next year, we can report that the quality of life is improving and that the dream of a good life for all Guyanese is becoming a reality,” President Granger said. 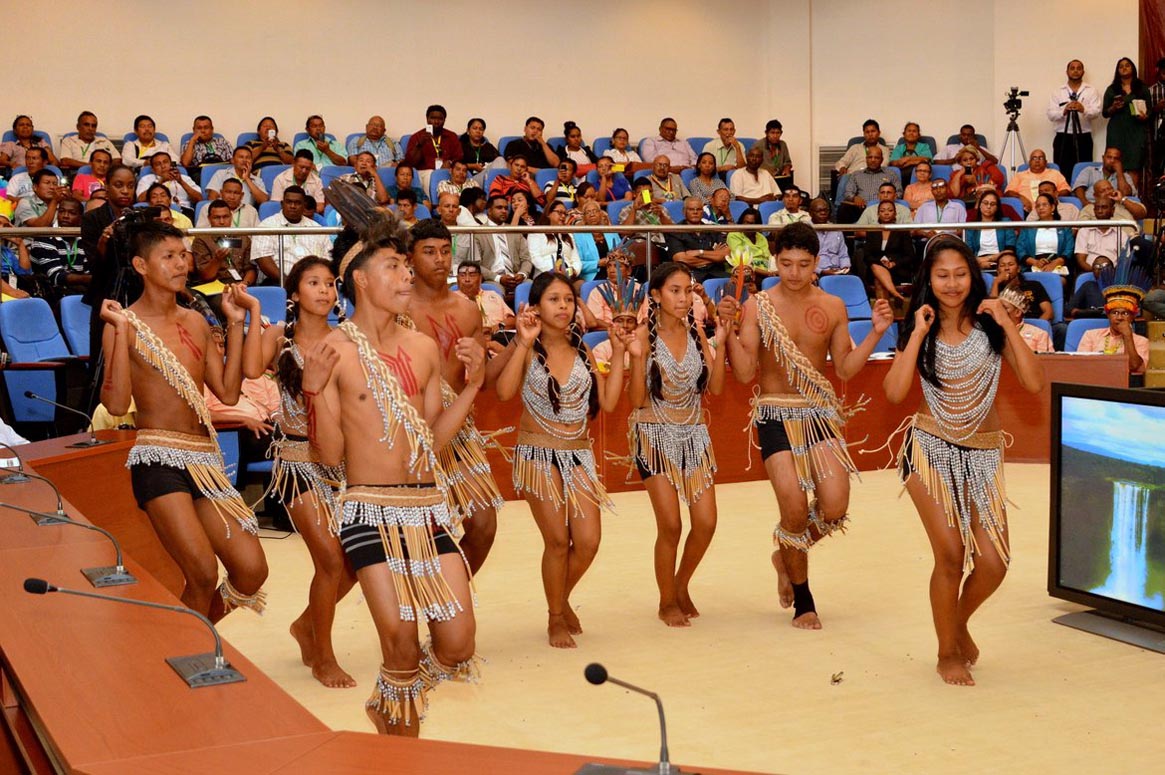 Members of the Pakuri Culture Group performing at the opening ceremony

Meanwhile, Minister Allicock reported that his Ministry has made considerable progress with the implementation of the 10-point plan, which was announced by the President at last year’s NTC meeting. So far, the Hinterland Employment and Youth Service (HEYS) Programme has been rolled out, a number of infrastructural works in various hinterland regions are on-going, the Hinterland Housing Programme is in its second phase of implementation and the Land Titling Programme will be extended to address land issues in a more holistic way.

The Minister also lamented the lack of respect among Toshaos and residents in certain communities and emphasise the importance of greater accountability and transparency at the village level. “Leaders are but first among equals and must by example, lead. Expelling Councillors from meetings for disagreement with Toshaos, threatening councillors with dismissal, making arbitrary decisions and entering into agreements to exploit village resources without village approval cannot be allowed to continue. The NTC needs to take its responsibility seriously,” Minister Allicock said.

Minister within the Ministry of Indigenous People’s Affairs, Ms. Valerie Garrido-Lowe pointed out that the NTC meeting is being held in an environment of great change, making reference to the an engagement between Toshaos and Councillors and members of the People’s Progressive Party (PPP) last evening. She said under the previous Administration, Indigenous leaders did not want to be seen with the Opposition out of fear of being victimised.

The NTC’s Chairperson, Joel Fredericks called on the Government to look into the land issues, particularly those pending for years. He also requested a stipend increase for Toshaos and Councillors, electricity for hinterland villages and spoke of the need for updating of the Amerindian Act.