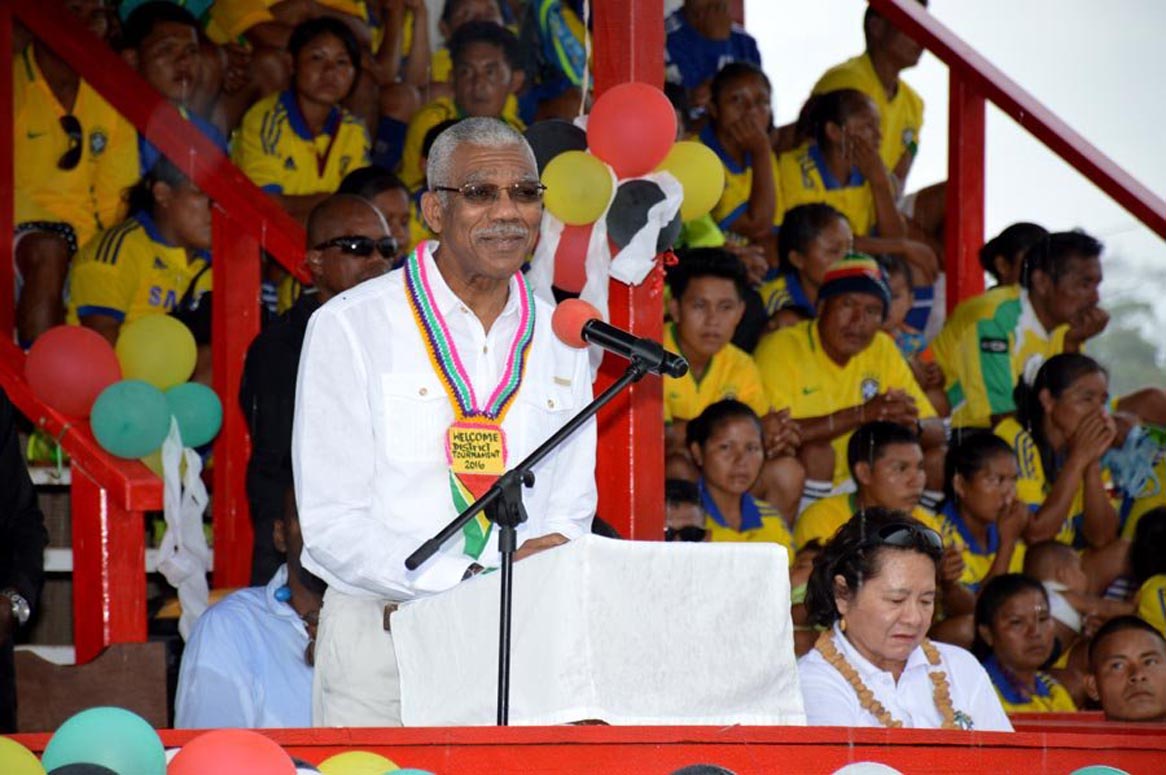 Georgetown, Guyana – (August 8, 2016) President David Granger, yesterday, lauded the hosting of the Upper Mazaruni 19th Annual District Games, which is being hosted under the theme “In the spirit of unity, excel” at the Kamarang Sports Ground in Cuyuni-Mazaruni from August, 7-15.  The President was particularly pleased with the level of diversity and the high level of competition and called on other regions to replicate the games.

Sports men and women from Kamarang, Kako, Kaikan, Arau, Paruima, Waramadong, Quebanang, Jawalla, Phillipai, Chinoweing, Imbaimadai and Isseneru, some of them travelling for several days are participating in the event, identified by their own flags and colours and will over the days of the competition participate in athletics, archery, volleyball, swimming and other novelty games.

President Granger said that the hinterland regions often produce talented athletes but because of the lack of infrastructure, they may never have the opportunity to regularly display their talents or compete with people from the coastland.

The Head of State mentioned plans to bridge the Essequibo River, improved road networks and access to air travel as infrastructural development is important to regional and national integration and development.

The National Sports Commission (NSC) under the Ground Enhancement Project provided 16 floodlights for the ground at Kamarang and these were handed over to the District Sports Council by Minister within the Ministry of Education, Ms. Nicolette Henry at the event. Ten of those lights have now been installed and games are being played during the night. Director of Sport, Mr. Christopher Jones, who declared the games open, also handed over a variety of sporting equipment.  The Ministry of the Presidency, along with the NSC provided meals and fuel, along with other support for arrangements to make the event possible. 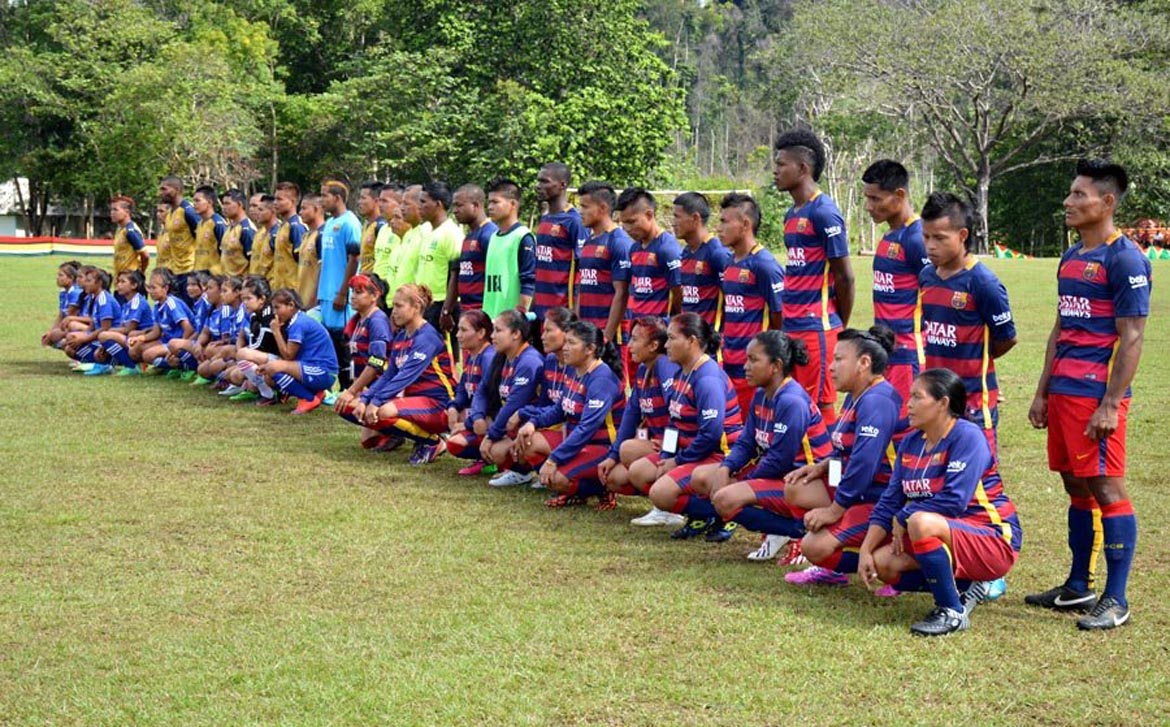 Minister of Indigenous Peoples Affairs, Mr. Sydney Allicock also used the opportunity to hand over a generator to President of the District Sports Council, Mr. Rudolph Wellington.  Minister within the Ministry of Communities, Ms. Dawn Hastings-Williams was also present at the event.

Further buttressing sport development in the region, Vice President of the Guyana Olympic Association (GOA), Mr. Charles Corbin, announced that the Upper Mazaruni is being added to the National Athlete Development Pilot Programme, which is intended to introduce a new sport in schools every year until 2020.  The first sport that will be introduced in the new school year is table tennis and the programme is organised by the Government of Guyana Guyana Olympic Association, the National Table Tennis Federation and the Guyana Teacher’s Union. 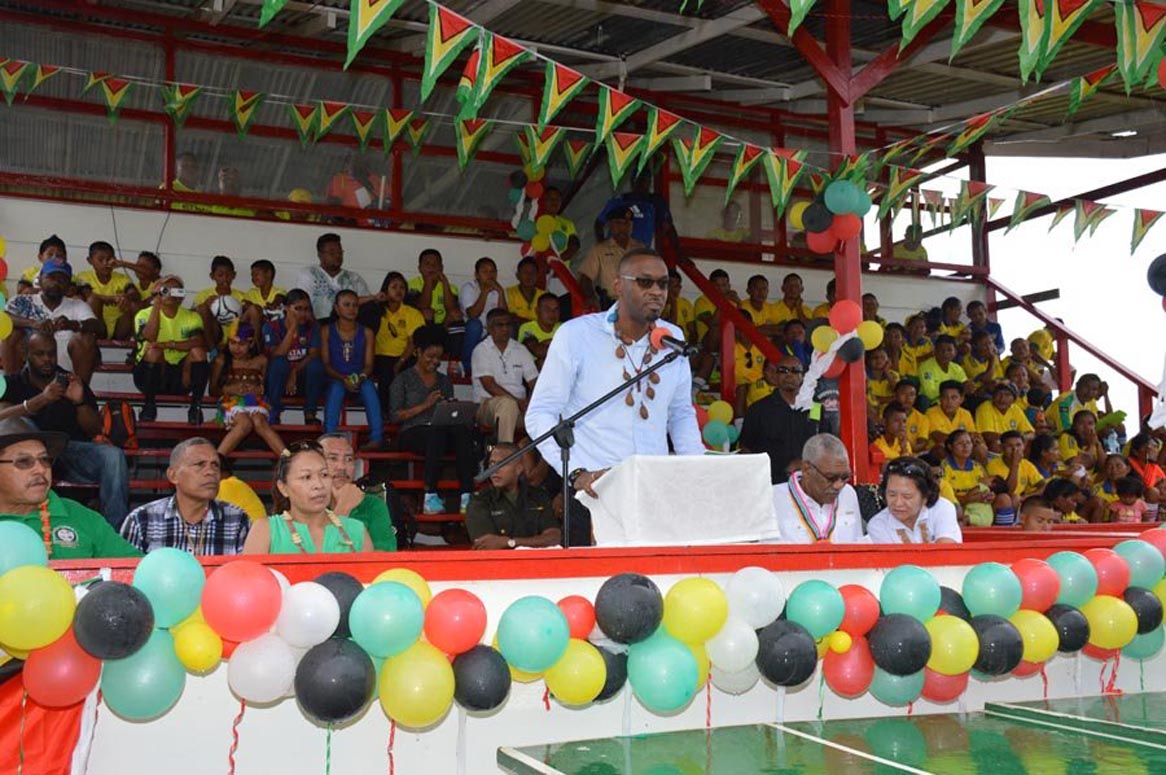 In this table tennis pilot programme, schools from six regions have been selected.  A key component of the programme is that it must include at least one hinterland region.  For this year’s programme, 10 schools in the Cuyuni-Mazaruni region will benefit.  These include Two Miles Primary, Three Miles Secondary, St. Anthony’s Primary Annex, St. John the Baptist Primary, Bartica Secondary School, Issenru, Jawalla, Kako, Kamarang primary schools and Waramadong Secondary school.  One hundred and six schools will benefit from the programme across six regions.

Mr. Corbin said that the aim is to ensure that a sustainable sports programme is implemented where elite athletes are identified, who can represent Guyana as well as promote healthy living through sport in Guyana.