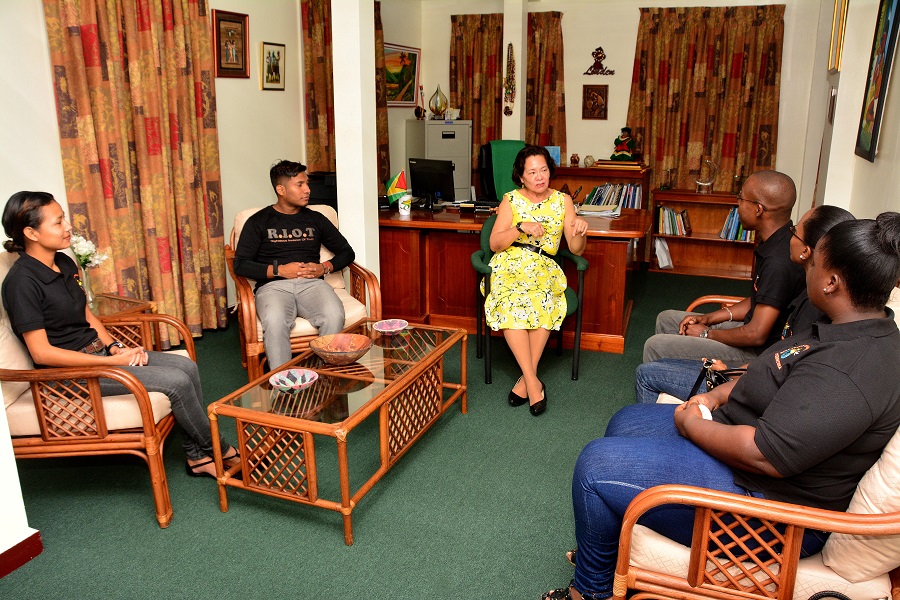 Georgetown, Guyana – (August 5, 2016) Minister of Social Cohesion, Ms. Amna Ally, yesterday morning, commended the Regional Democratic Council (RDC) of Mahaica-Berbice (Region Five) for their positive response to President David Granger’s call for reconciliation and advised them that she now intends to work even closer with them to support the strengthening of relationships among members.

“My role here in Region Five … is to guide you, to mentor you, to counsel you so that after today we can have a positive, smooth way forward,” Minister Ally said, at a meeting for Mahaica-Berbice regional officials, held at the RDC office, West Coast Berbice.

The Minister was heartened by the initial steps of reconciliation taken by the RDC, after a seven-month long impasse, which disrupted the smooth flow of the office. She said negative attitudes were at the root of the standoff and that respect must be practised to safeguard against a recurrence.

“This … is not about personalities. It’s about issues and that is what we must be mindful of. Putting our shoulders to the wheel to make sure that things happen, forgetting race, forgetting cultural differences, forgetting religious beliefs because while all of those exist and they are differences, they must not be barriers,” she said.

Minister Ally further noted that at this crucial time of identifying priority projects and budgeting, cooperation is important. “I want peace. I want the coming together because it is only if you come together and you work together then we can move Region Five… you have got to be a Region that is very progressive… we have to ensure…that we do things the right way,” she said.

Meanwhile, Regional Chairman, Mr. Vickchand Ramphal and Regional Councillor, Ms. Carol Smith-Joseph both said that they were pleased by President Granger’s intervention in the stalemate and were now looking forward to a good working relationship.

Mr. Ramphal charged the councillors to unite. “Let us work as a united team, as a united region number five for the people of our region. Let us move Region Five together,” he said.

Ms. Smith-Joseph said that she was “elated and buoyed” by the President’s mediation and by the behind-the-scenes interceding by Minister Ally. She said that it broker[ed] a deal that serves to exhort all parties, to explore all avenues of social cohesion and good will aimed at working in harmony with one another for the…good of [the] region”.