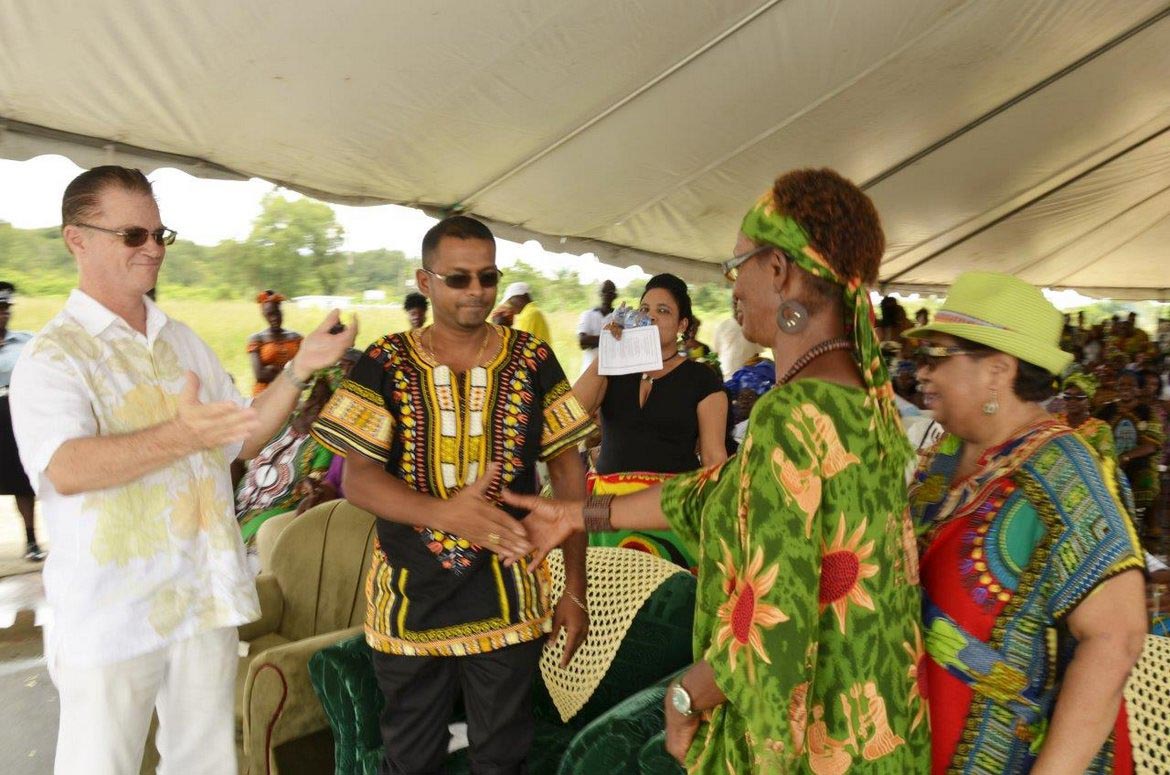 Georgetown, Guyana – (August 1, 2016) President David Granger, today, called on the members of the Regional Democratic Council (RDC) of Mahaica-Berbice (Region 5) to end the months long impasse, which had been sparked after the Regional Chairman, Mr. Vickchand Ramphal had been absent, during several visits to the Region by the Head of State.

However, President Granger called for an end to the standoff, which had seen some Council members staging protest action at Council meetings, demanding an apology from the Regional Chairman for what they believed was an act of disrespect to the President. However, the Chairman was present at the Emancipation Day Celebrations in Ithaca, West Bank Berbice, today, where the President called on all Council members to let ‘bygones be bygones’ for the good of the Region.

Council member, Ms. Carol Joseph, approaches Regional Chairman Mr. Vickchand Ramphal and they shake hands after President David Granger called on the Regional Democratic Council to work together for the good of the Region.

“Today I want to make a special appeal so that you understand very well that this country could only work if all three levels of Government work together. The Central Government, represented here by the President and the Minister, the Regional Administration, represented here by Mr. Ramphal and the Neighbourhood and Local Government, represented by the Mayors and the Councillors and I want all three levels of Government to work together and today in Region 5; Mahaica-Berbice Region, I declare, I do declare that all the members of the RDC must work together for the good of the Mahaica-Berbice Region from August 1, 2016,” he said.

It was at this moment as the crowd cheered, Council Member, Ms. Carol Joseph approached the Regional Chairman, Mr. Ramphal and first shook his hand then they embraced as President Granger declared, “What a blessing! What a Blessing! Region 5 let us work together. This Region produces so much rice, so much sugar [and] so much fish. There must be nothing to impede or obstruct the prosperity of this Region.”

The Head of State, who was visibly thrilled by the reconciliation signaled by this moment, said that while the members of the Council will not always agree, the one thing they can all agree on is that the development of the Region and the country as a whole is a priority. President Granger also reminded residents that the proper administration of their communities and the country is in their hands. 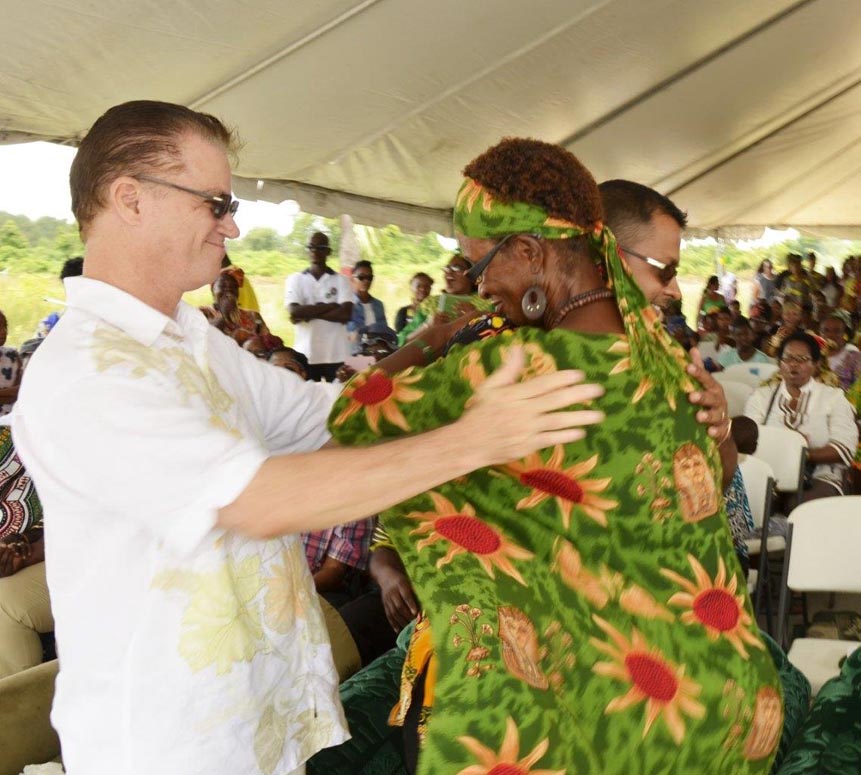 “Every one of you has power. It is called the vote. For the first time in nearly two decades, we were able to go to the polls inn March 2016 to elect your neighbourhood councils, your municipalities. Last year we went into democratic elections and you voted. It is in your power; the power is in your hands to choose leaders, who can direct the business of your neighbourhood, of your municipality, of your region and of your country,” he said.
Up to last week, President Granger had called again for cooperation rather than confrontation to be the foundation of a new political culture in Guyana, during a recording of the television show, The Public Interest. The Head of State had issued calls for a “consensual outcome so that we can work together for the good of the Region.”

Mr. Ramphal, in an invited comment, said he is very happy that the President has intervened in the matter so that the work of the Council can proceed. Council member, Mr. Delon Crawford said that while work was still being done in the Region, he believes that the President’s move to end the impasse today is a good one and he is ‘excited’ for the holding of the next RDC meeting. Another Council Member, Mr. Dolston Hutson said that he was confident that the impasse would have come to an end soon. He added that while the protest action was in defence of the Head of State, his call for it to end must be respected.

One resident was visibly overjoyed at the development and said, “I feel so happy about it because now we can get things going. We can put things into place and I am happy happy to know that today they can come together by hugging each other and at least forgive each other. We must forget the past and look to the future.”