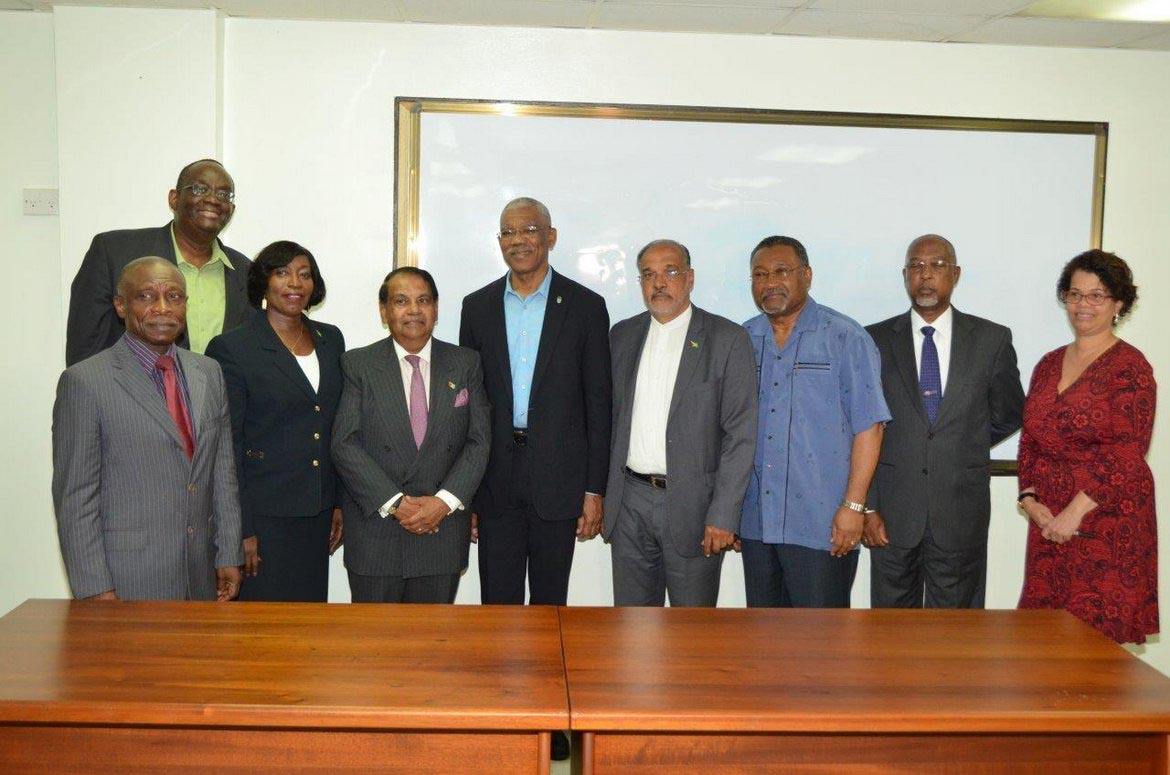 Georgetown, Guyana – (July 25, 2016) President David Granger, earlier this evening, issued a strong charge to the newly appointed diplomats to make Guyana’s interests and that of its people their first priority, as they take up their new posts. Among these national interests is the Guyana/Venezuela border controversy. The President cautioned, that no deal; no matter how lucrative, must take precedence over Guyana’s territorial integrity.

The President further charged the envoys to work to ensure that the administration’s thrust of security and territorial integrity, economic diplomacy, social cohesion and national unity are advanced. The diplomats recently underwent a week of training and orientation at the Foreign Services Institute at the Ministry of Foreign Affairs.

The Head of State said that while he expects that relationships will be built and deals will be brokered between Guyana and the other countries in the various hemispheres, Guyanese ambassadors should not allow these deals, no matter how lucrative, to overshadow the country’s territorial integrity and best interest.

“…the border issues are not something that can be bargained away or traded. Sometimes our friends think that we are always complaining. Sometimes people have not given us the support we need. Some have stepped up and batted for us, yes, but we have to continue to pursue the goal of completely freeing our territory from Venezuela and Suriname’s claims. These two claims are hampering our development. The Foreign Ministry and those diplomats, who go abroad, must understand that inside out,” President Granger said.

The Head of State continued, “Make sure you have a thorough grounding because sometimes I feel that we have diplomats, who don’t understand and who don’t care that they don’t understand the seriousness of the territorial problem. Sometimes they feel that a bit of rice and a bit of oil and we don’t have to talk about it. Some people just try to dismiss the territorial problem. [They] focus on the rice, focus on the oil, focus on getting another gymnasium, and don’t talk about the issue. No. No. No. We have to put that at the forefront of our diplomacy that our territory is not going to be bargained away. We are not going to sell out ‘one curass’ and you have to believe that.”

Also on the security front, the President noted that we live in an era where several countries across the globe have come under terrorist attacks and are waging wars against drug trafficking, money laundering, human trafficking and other crimes, the Head of State noted that these are also important areas of concern, since security is a major issue for Guyana.

The Head of State emphasised the responsibility that comes with these appointments and said that they are not personal, neither are they positions for personal gain. Therefore, they should be upheld with the utmost level of commitment and professionalism.

“The appointment of an Ambassador or a High Commissioner…is an appointment for hard work. It is not an appointment for party supporters and I would like to feel that our appointments have been based on merit. We are aiming at the creation of a professional service…The Foreign Service is not a place for party patronage. It is a place for hard work and for professionalism. Anyone who has served long enough overseas would know that it is not a place where you can flaunt your own interests to the prejudice of the country’s representatives… Being a diplomat overseas requires that you represent the national interests and that when people look upon you or at you, they see the best values of the Cooperative Republic of Guyana,” the President said.

Economic diplomacy, he said, must also be a chief area of focus for the diplomats as they are the best ambassadors to sell Guyana and its products. The President noted that for far too long, Guyana has depended on the rice, sugar, bauxite and mining to drive its economy and the time has come for economic diversification. This, however, can only be achieved if combined with the work of the Ministry of Business, the Ambassadors promote Guyana and its vast potential to investors, especially in the Caribbean region, he said.

“There has to be some sort of diversification and it has to be in an area in which we have some sort of advantage. We need the Caribbean… It’s on the basis on which Guyana’s economic turnaround will happen. We need to be able to sell our products, not to 750,000 persons but to five, 10 or 15 million so it is not a matter of option; it is obligatory for us to enter more forcefully into the Caribbean and even if it is faltering, fortify it so that we can have a market for our produce. We will spare no effort to ensure that the Caribbean Community is strengthened to serve the interests of all of our peoples,” the Head of State said.

The President also pointed out that eco-tourism is an area that can benefit from aggressive marketing. He noted that with the right investments and attention, this sector can become a major driver for the Guyanese economy.

“There is more that we can do without depending on oil… if only we took tourism; eco-tourism seriously we could become rich. We can develop an economy based on tourism… Countries with less have done more. We need to look at these economic opportunities and these are things you would have to sell in your missions overseas. We have to diversify our economy to provide employment for our young people and increase our wealth,” he said.

While Guyana has made some advances in the area of social cohesion, President Granger called for more to be done to bridge the gaps, which currently exists. This is the mandate of the Ministry of Social Cohesion and the reason for its establishment. However, solidarity must be the focus of all Guyanese, especially those in charge of promoting the country, so that the reality of a more cohesive society, inclusive of the Guyanese diaspora, is achieved. “If you don’t think social cohesion is necessary, think about the opposite. It is still a big problem in Guyana and there are still forces, which are working to keep the people divided… Guyanese do not want to see a government, which represents only one ethnic group and I don’t even think they want a government of one political party,” he said.

President Granger added that exclusivity rather than inclusion has hurt the development of the nation. “We have had a lot of exclusiveness and social cohesion is about inclusiveness. We have had too much exclusives in this country and I am inspired by what I see when I go to the various regions… I learn, I listen and I try to solve problems. We are holding each other back if we do not recognise that the different groups in the different villages are entitled to the same benefits as people on the coast or in the city. Social cohesion is not a fashionable term; it is about bringing people together. If you are going to work overseas, these are some of the values we expect you to promote,” the President said.

Responding, Ms. Barbara Atherly, Consul General designate to the United States of America, who will be based in New York, said that the mandate, which has been set out by the President has been duly noted. She then pledged to advance his call for social cohesion in the diaspora.

“I took particular note of the structure of the government and social cohesion. Over the years we have always swept this issue under the carpet and I am happy that it is being put on the forefront. I am going to New York and I have a very wide diaspora to deal with there and I will be using this as I go. I will try to work to bring the diaspora together so I am glad that you have mentioned that,” she said.

Meanwhile, Minister of Foreign Affairs, Mr. Carl Greenidge, in brief remarks, said that the week-long orientation and training sessions were organised especially for members of the Foreign Service, who had no prior postings and are new in the role. “We tried as far as we could to ensure that they were not only equipped in foreign affairs matters, but we tried to deal with those aspects of the evolving international environment, which was essential such as money laundering, trafficking in persons and terrorism, which are very current,” he said.

Mr. Ronald Austin, an International Affairs professional and a facilitator of the sessions, said that the week has been a success.

“It has been a very successful week. It was a programme that was started with an introduction to Foreign Policy by Mr. Rashleigh Jackson followed by a number of presentations on economic diplomacy, the importance of information and communication technology to foreign policy, tourism as part of our economic agenda, the diaspora, immigration, passports and registration. I have no doubt that our new heads are more than ready to take on their responsibilities,” he said.

At the end of the presentations, the diplomats were given the opportunity to engage the President and Minister on related matters or to share their suggestions on issues, which they believe should be addressed by the administration in the promotion of its foreign policy.