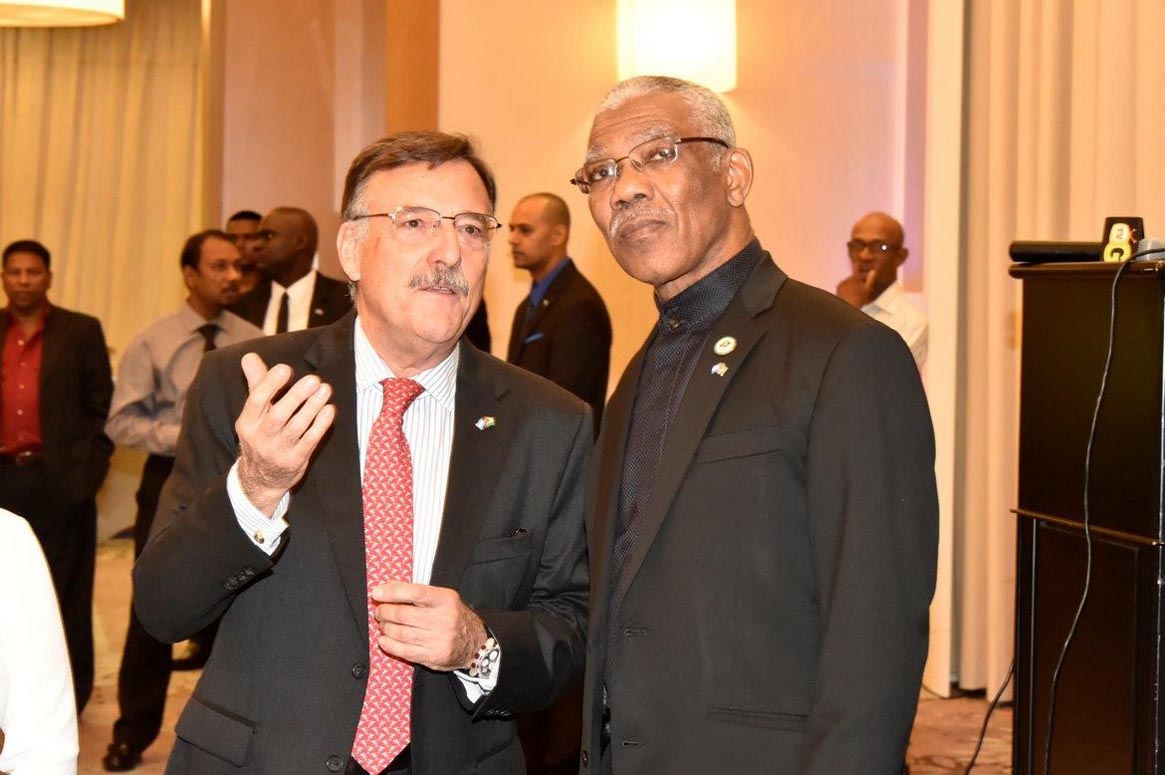 Georgetown, Guyana – (July 10, 2016) President David Granger, last evening, reiterated Guyana’s commitment to establishing, deepening and strengthening ties with countries across the various hemispheres, so that trade, cooperation and the exchange of ideas for the benefit of all involved, can be accomplished.

President Granger noted that while great distances and disparities separate the two countries, geographically, they remain united by the idea of a more integrated South America.

“We adhere to the ideals of the Union of South American Nations (UNASUR), the Common Market of the South (MERCOSUR), the Community of Latin American and Caribbean States (CELAC) and the Organisation of American States (OAS). Guyana and Argentina belong to a continent of cultural, political and social diversity. The common membership we share in these organisations allows us to diminish these differences through the pursuit of common objectives. Continental cooperation allows us to find common ground, to build consensus and to confront the challenges we face,” the Head of State said.

In confronting these challenges President Granger said that Guyana will continue to work towards deepening and strengthening continental cooperation.

Guyana and Argentina share common values, he said, such as mutual respect for each other’s territorial integrity and sovereignty, mutual non-interference in each other’s internal affairs, cooperation for mutual benefit, respect for treaties and international law and the maintenance of peace and security. The President added that Guyana will seek to capitalise on and strengthen this relationship.

“Guyana understands that it plays an important role as the ‘gateway’ between the Caribbean and the Continent. We are convinced that, with a common vision and a common voice, we can avert conflict and overcome threats to our individual and collective security. Guyana avails itself of the opportunity to iterate its commitment to maintaining our Continent as a zone of peace. The countries of South America can be an example to the world by creating a community where our peoples and nations co-exist in peace. The possibilities for increased cooperation between Guyana and the Argentine Republic are encouraging,” the President said.

Since his assumption to office, President Granger has been pushing for a ‘green economy’. The President believes that cooperation between Guyana and Argentina can help to achieve this vision, since Argentina has a similar commitment.

“We share a commitment to ‘green’ growth. Guyana notes the steps that Argentina has taken in improving the infrastructure of its national parks, increasing renewable energy use in remote communities, implementing sustainable forestry and solid waste management and introducing measures for the restoration of mined-out areas. We are keen to learn from Argentina’s experiences in environmental security. We are keen to pursue discussions on extending the protected areas and national parks,” he said.

Meanwhile, Argentine Ambassador to Guyana, Mr. Luis Martino, in his comments said that the Argentine Government is committed to starting a new phase of bilateral relations since it believes that a lot can be achieved for increased levels of cooperation.

“This vision applies not only to Government agencies but also to the private sector, to work closer together to identify and strengthen the potentialities that already exist. We are looking at a project dealing with Public Security, on a wide range of issues, such as Criminology, Forensic Studies, Environment, Piracy, Fishing and Anti-Smuggling, Forensic Medicine, among other areas. The proposed package is now under review of the different agencies in Argentina, so that we can draft the plan on the way forward,” Ambassador Martino said.

Ambassador Martino makes a point to President Granger during the Embassy’s reception held at the Marriott Hotel, earlier last evening.

As it stands, he said that Argentina is currently in discussions with the Ministry of Natural Resources and the Protected Areas Commission, an opportunity in the field of Protected Areas and National Parks, for them to participate on an on-line and on-site three months course in Buenos Aires to upgrade knowledge in that field for experts throughout Latin America and the Caribbean.

The Embassy is also working with the National Gallery on project that involves the eventual restoration of around 45 pieces of art works belonging to the National Collection, a part of the Guyanese cultural patrimony. 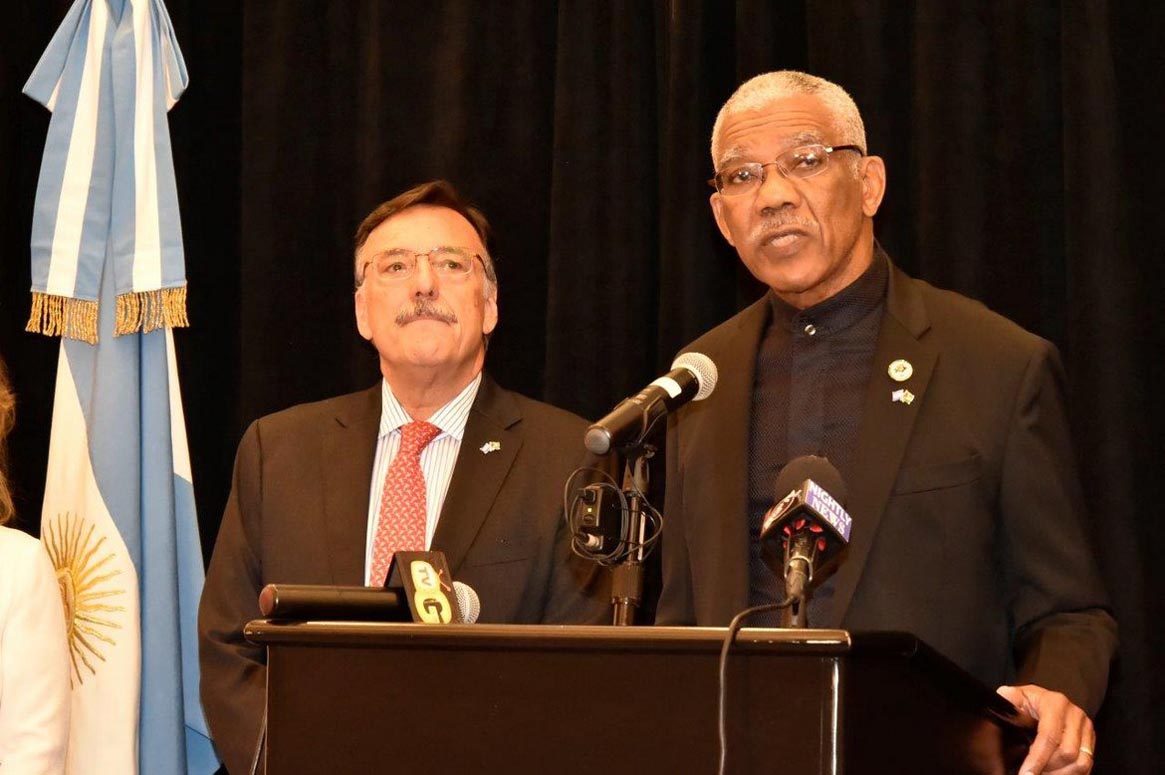 President David Granger delivering his speech at the reception to mark the Bicentennial Independence Anniversary of Argentine Republic, this evening at the Marriott Hotel in Georgetown.

“By no means least, we are also engaged in a lively discussion in the area of sports, in coordination with the Ministry of Education… and the Guyana Olympic Association, to bring to Guyana a rugby coach from Argentina for an intensive training of the National Team, the “Green Machine”, in preparation for the final of the Rugby Americas North Championship to take place in Mexico City at the end of July,” he said.

The Ambassador said that as Guyana commemorates its Golden Jubilee and Argentina it’s bicentennial, it is his wish and that of his Government, that the year will bring nothing else but closer links between the two countries, in the spirit of friendship, solidarity and peace.

The event was attended by First Lady, Mrs. Sandra Granger, Former President, Mr. Donald Ramotar, Vice President and Minister of Foreign Affairs, Mr. Carl Greenidge and other Ministers of the Government as well as members of the diplomatic corps and the National Assembly.