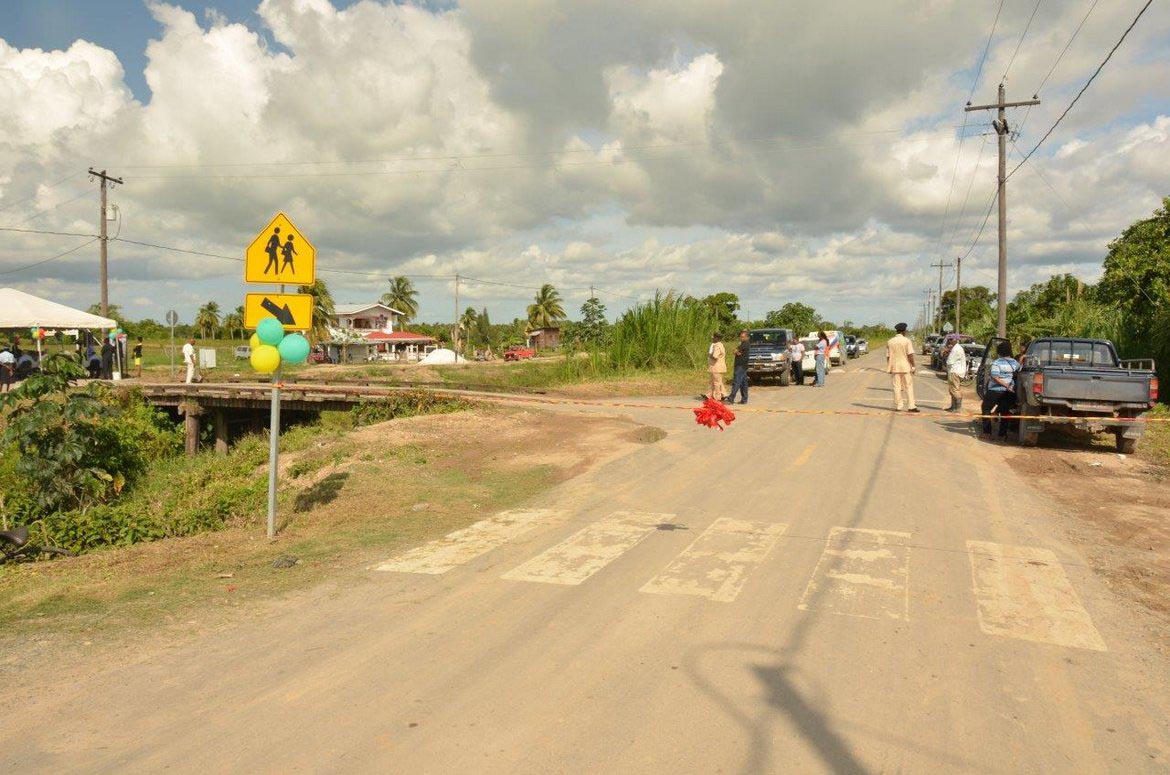 Georgetown, Guyana – (July 8, 2016) President David Granger said, today, at the official opening ceremony of two Farm to Market Roads in Parika, Essequibo Islands-West Demerara (Region 3), that Guyana’s abundance of land and freshwater supplies for agricultural purposes places it an enviable position to take advantage of the increased demand for food globally and in the Caribbean Community (CARICOM). He added that Region 3, a ‘power house’ in the agriculture sector, is well poised to make a significant contribution in this regard.

The roads, which were officially opened today, are two of four farm to market roads that make up the Access Dams/Roads Rehabilitation Project funded under an agreement between the Government of Guyana and the CARICOM Development Fund (CDF), which was initially signed in July 2013 to the tune of US$9.09M.

In November 2015, that agreement, which is the largest one in the region to date, was amended from the original figure to US$11.87M, of which US$3.49M is considered a grant. This was made possible due to Guyana making its agreed contribution of US$3.5 million to the CDF. The roads, which were constructed and upgraded, include the two in Parika; Ruby Paved Road and Parika Paved Road and the Laluni All Weather Road and the Onverwagt Paved Road.

The 8.2 km Parika all weather road and bridge project. 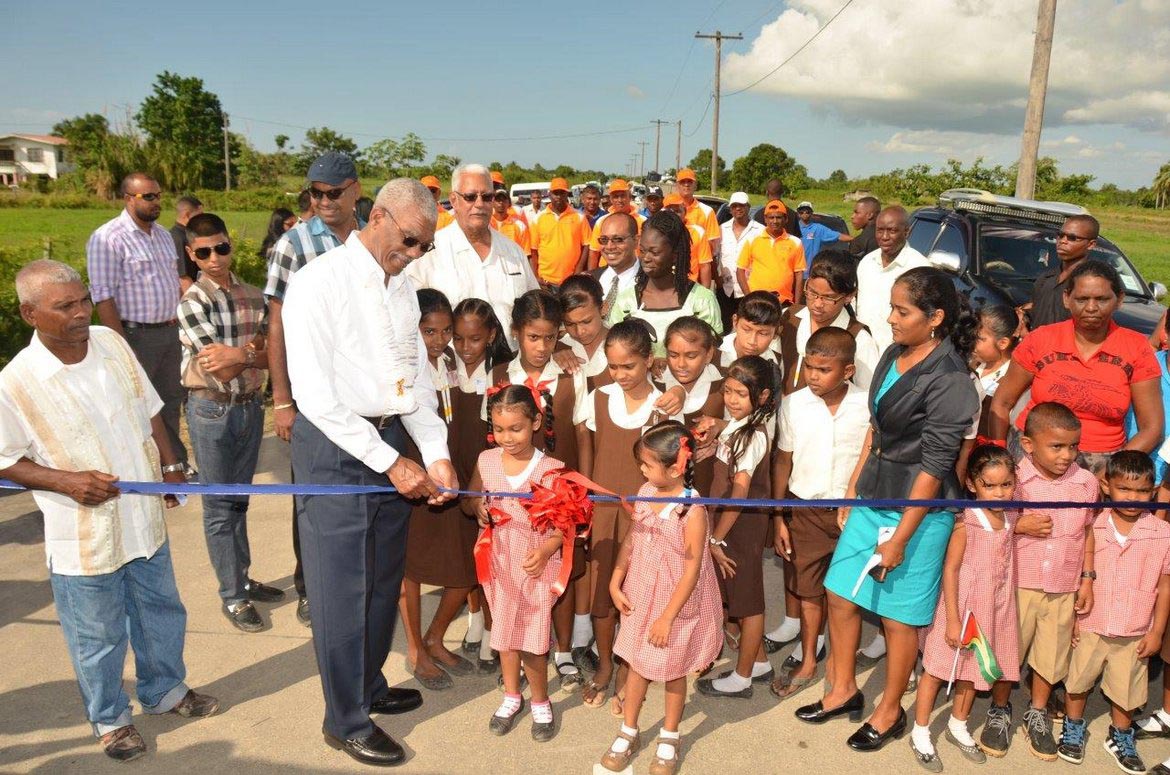 President David Granger helps this little girl cut the ribbon to mark the opening of the Ruby Paved Road, which is 7.7 km long. This project also included a reinforced concrete bridge and culverts.

These roads are expected to benefit more than 9,500 farmers and enable them to get a larger amount of their production to the markets in a timelier manner and in better condition. President Granger indicated that he has received reports that the Ruby Road has already resulted in a 25 percent increase in acreage of cash crops under cultivation from 2014 to present, whilst in Naamryck-Parika Back, there has been a 50 percent increase in acreage under cash crop cultivated from 2014.

This, the President said, emphasises the importance of investments in infrastructural development in the agriculture sector. He added that Government will continue to work in concert with farmers, residents and the regional and local administration to ensure that development projects in the sector are successful and benefit the Region and the country as a whole.

“Without infrastructure, there will be an increased cost for farmers to get your produce to market…so infrastructure is essential and that’s why we know that this road and the other roads that are being built will help you to become richer. Infrastructure such as these roads will facilitate greater access by our farmers to markets. The roads are a means to stimulate the rural non-farm economy, catalyse the development of communities, and facilitate the integration of rural areas into national economies… We will continue to invest in agricultural infrastructure,” he said. 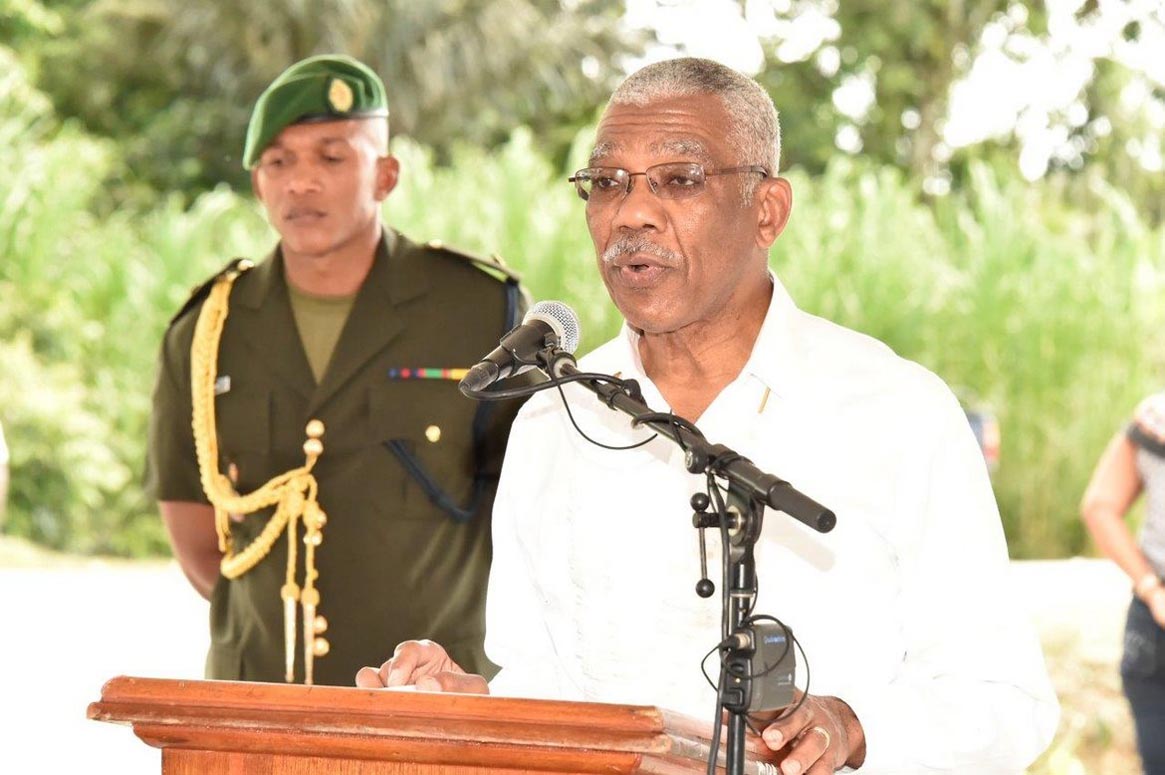 The President also announced that Minister of Agriculture, Mr. Noel Holder would be looking into why the The Hubu cassava mill and the Parika Packaging Facility, both planned as innovative investments to help farmers and manufacturers gain a higher price for their produce, were not successful. The Minister, he said, will explore whether a private enterprise model for similar programmes would be more feasible.

The President also said that investment, whether through members of the diaspora or from States in the region is required if Guyana is going to be able to take advantage of opportunities in CARICOM and beyond, presented by the need for food security.

President Granger said, “Guyana hosted, this past week, the 37th Regular Meeting of the Heads of Government of the Caribbean Community. I have invited regional leaders to invest in Guyana, including investing in Guyana’s vast agricultural potential. The countries of the Caribbean have the capital. We have the land and freshwater. There is no reason why we should not engage in a partnership aimed to increasing agricultural output to help achieve food security in the Caribbean.”

Expertise, knowledge and information, the President said, are also key to the development of the sector and declared that Guyana can provide the answers to the region’s large food import bill.

“International food prices have been declining for the major traded agricultural products and are at the lowest levels since 2009. Yet, the food import bill of CARICOM has been rising and stands, today, at over US$4 Billion annually. CARICOM’s food insecurity must be reversed if the Caribbean is to survive. Guyana’s farmers can contribute to regional food security by increasing agricultural output. Caribbean leaders are looking to Guyana as the new horizon for agricultural development,” he said.

Minister Holder, in his remarks, said that when the current Government took office addressing the deplorable and underdeveloped infrastructural facilities, with particular reference to farm to market roads, was placed at the top of the agenda.

“Rest assured that we are actively working to provide the necessary investments in infrastructure to raise your quality of life, through proper drainage and irrigation, and improved farm to market access roads. While there is much more to be done, I can assure you that our government is resolute in ensuring that the livelihood, of our people is safeguarded, so ensuring a good life for all,” he said.

Chief Executive Officer of the CDF, Mr. Rodinald Soomer, who also spoke at the event said that he is happy “to speak at this occasion where there is the delivery of tangible evidence of the gain that CARICOM integration is delivering to a Member State; vitally needed concessionary financial resources for practical projects like these access roads that redound to the benefit of ordinary citizens.”

He added that the purpose of the CDF programme is intended to directly increase agricultural production in regions 3, 4 and 5 with the long term objective of increasing incomes from farming as well as food exports to CARICOM and further afield.

“The CDF was established under Article 158 of the Revised Treaty of Chaguaramas, signed in January 2001. The Agreement Relating to the Operations of the Fund was signed in July 2008 and the CDF began operating on August 24, 2009. The purpose of the CDF is to provide technical and financial assistance to disadvantaged countries, regions and sectors. The mandate is to assist Member States in reducing disparities, promote convergence and compensate for any negative impact and dislocation that may result from the implementation of the CSME,” Mr. Soomer explained.

The CEO added that Guyana has already submitted its Country Assistance Programme to the CDF for the current Second Cycle and is the first country to do so.

Mr. Soomer called on farmers and residents to continue to take ownership of the roads as a key component of the programme was community participation. This call was eagerly accepted by Farmers’ Representatives Mr. Hemraj Ragnauth and Mr. Shamir Baksh.

Mr. Baksh, who is from Ruby, told the gathering, “I want to say that in the coming years, we the farmers know of our responsibility to care what you have given to us because it has cost millions and millions [has] to be borne in the repayment and tax payers, not only we the farmers but other tax payers will have to face that burden so it is the duty of us the farmers to ensure that we maintain our roads.”

The Ruby Farmer also said that while the benefits of the upgraded roads can already be seen but farmers need more support from the Government.

“It has caused the land values of these areas to go up. Apart from that, when we look at the farming population within these communities and that is between Good Hope and Lookout. We find that 70 percent of our farmers are young people; people who aggressively work the land but whilst they work the land, they need assistance and here is where I would like to ask our Honorable Minister of Agriculture to see what assistance especially in terms of finance, in terms of technical advice, so that we can educate them much more. We also need marketing strategies,” he said.

Mr. Ragnauth emphasised the value of community involvement in the implementation phase of the project. He said, “Let me say how happy we the farmers are to have roads, which were really a ‘suffering’ for us. When we were given the opportunity to sit as representatives on the board, for the planning aspects for this road, it was really an honour for me. I specifically want to say thanks to the Government of Guyana for giving us this opportunity to have two beautiful roads. I specifically want to emphasise that we the people here are the beneficiaries and we should really, really take precaution to care these roads.”