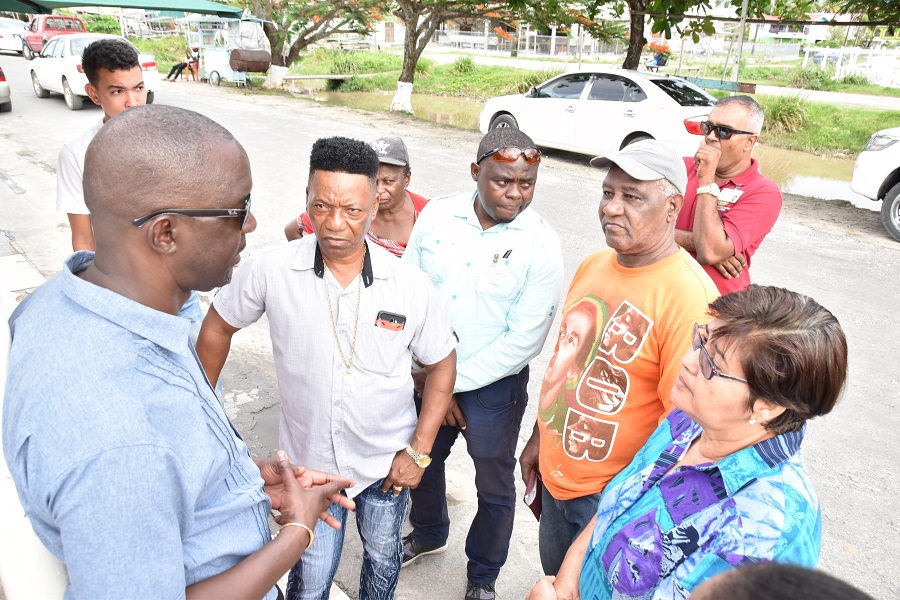 Georgetown, Guyana – (July 6, 2016) First Lady, Mrs. Sandra Granger, earlier today, charged the graduating class of the West Ruimveldt Primary School to guard against distractions and “to focus on your education, to take every opportunity offered to learn and to develop yourselves so that you can contribute to, and share in the wealth of our nation”.

The First Lady delivered this charge at the school’s 31st Graduation and Prize-giving Ceremony, which was held in the auditorium at its West Ruimveldt location. Mrs. Granger encouraged the graduates to remain motivated as education holds the key to their futures.

“…Through education your life opens up to all possibilities. You begin to respect other views and opinions and recognise how great it is when we can share our own and learn from others’ ideas and understandings. Education is the key to success. As your school motto states, you achieve “Progress through Education,” the First Lady said.

She told the children that it was particularly important that they make education their priority as in this modern age they are bombarded with many more images and messages via the internet that glamorises ‘hustling and fast living’.

“But then what? After you make your money how do you hold onto it? How do you plan to increase it and to move up in life? The core subjects that you…have learnt in primary school; English, Mathematics, Social Studies and Integrated Science are the foundation for your future,” Mrs. Granger said.

Meanwhile in her report, Head Teacher, Ms. Ademola Osborne said the school was proud of its achievements and praised the dedication of her teachers, the commitment demonstrated by parents and guardians, the Parent/Teachers Association and the students’ interest in learning. 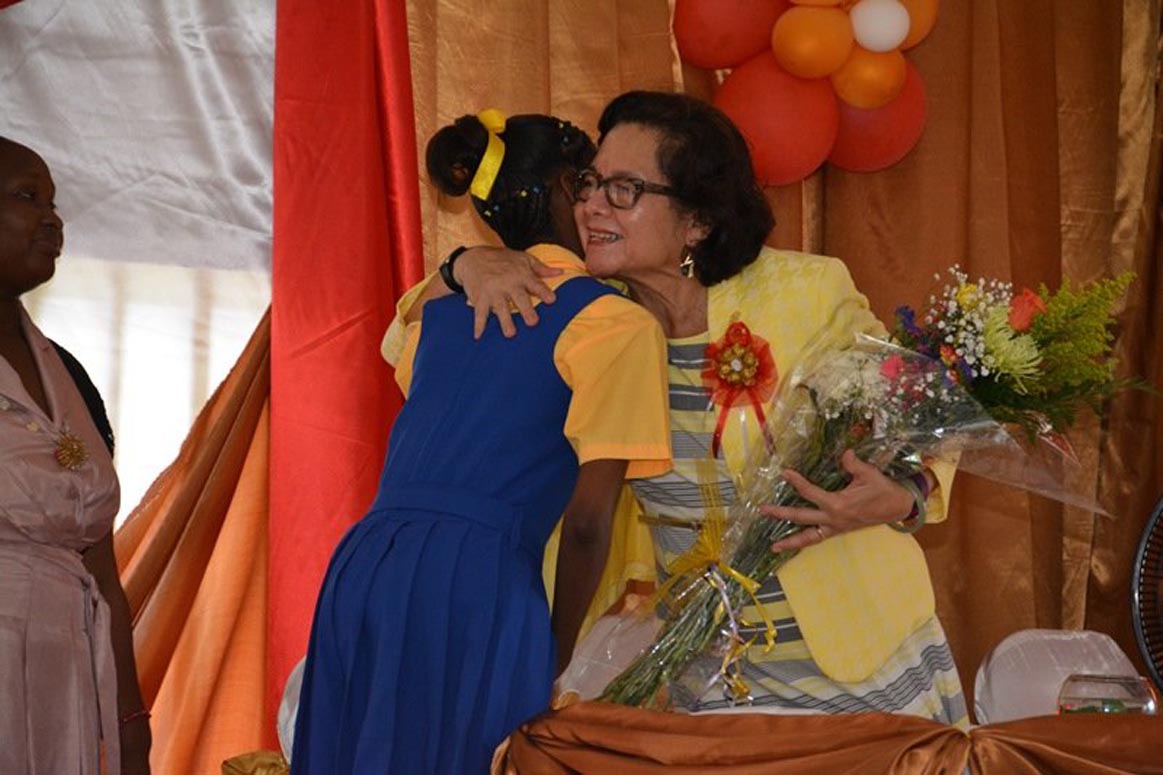 First Lady, Mrs. Sandra Granger shares a warm embrace with Best Graduating Student Ms. Jada Leitch, after she presented her with a bouquet in appreciation for her attendance at the graduation ceremony.

Four students, who wrote the National Grade Six Assessment (NGSA) Examinations, obtained passes for senior secondary schools in Georgetown. Three of them will be attending schools that offer a six-year programme. They are Ms. Jada Leitch and Ms. Sadafa Ally, who were named Best Graduating Student and runner-up, respectively and who will both be attending St. Stanislaus College. Ms. Leitch received the lion’s share of the awards and trophies presented, followed closely by Ms. Ally. Ms. Deneisha Richards followed closely in their wake, earning several awards for her performance. She will be attending St. Rose’s High.

The Ministry of Social Cohesion added to the celebration at the school by presenting the top five students with bicycles and the top ten students with backpacks. The items were donated under President David Granger’s Boats, Buses, Bicycles plus Breakfast and Books (Five Bs’) programme, which aims to help every Guyanese child to access education. The programme is administered by the Ministry of Social Cohesion. 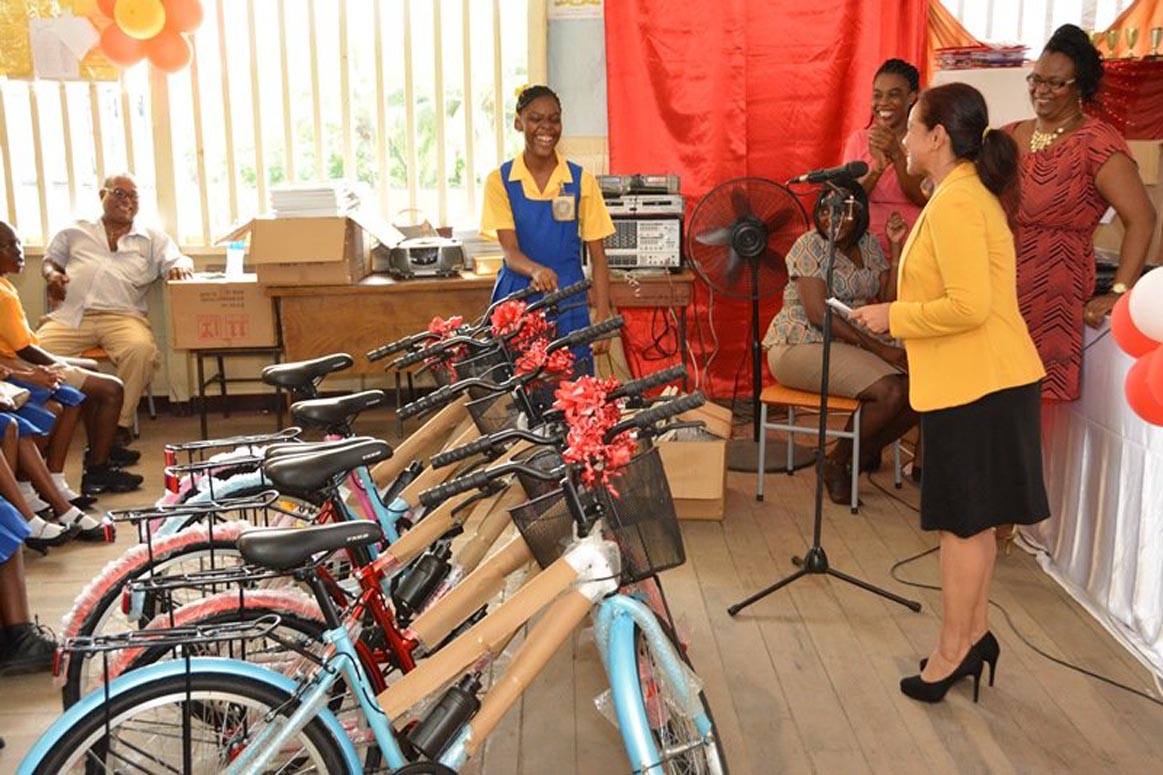 Ms. Jada Leitch laughs with joy after Ms. Pamela Nauth, Technical Officer at the Ministry of Social Cohesion invites her to choose her bicycle. Several of the Grade Six teachers (pictured right) cheer her on.

After expressing regrets that Minister of Social Cohesion, Ms. Amna Ally could not attend the ceremony due to prior engagements, Ms. Pamela Nauth, Technical Officer at the Ministry, presented the gifts to the students. Ms. Nauth recalled that the items were being presented in fulfilment of a pledge Minister Ally made to the school on April 13. She conveyed the Minister’s congratulations to the top graduating students and to all the students who wrote the NGSA. “Kudos to all of you. You all did extremely well. Continue to be focused in your future endeavours,” she said.

The graduation programme was ably managed and chaired by graduates Ms. Akezia Williams, Ms. Emily Dilchand, Master Jeremiah Pellew, Ms. Romaera Barker, Ms. Jada Leitch and Ms. Sadafa Ally. The school’s choir gave a rendition of Elton John’s “Return to Paradise” while the Grade Six girls danced to Mariah Carey’s “Hero”, distributing flowers to their teachers at the end. At the close, a group of Grade five pupils charmed the audience with their rendition of a folk song.

Message of His Excellency Brigadier David Granger, President of the Cooperative Republic of Guyana on the occasion of Eid-ul-Fitr

Message of His Excellency Brigadier David Granger, President of the Cooperative Republic of Guyana on the occasion of Eid-ul-Fitr