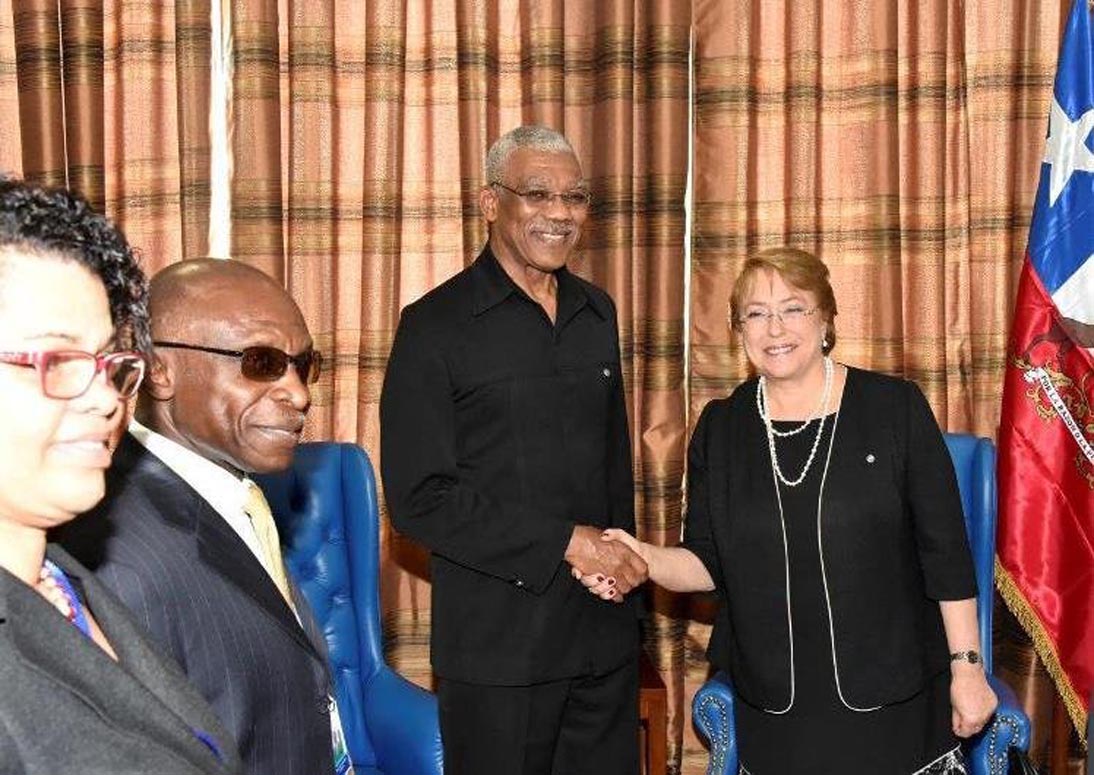 Georgetown, Guyana – (July 5, 2016) President David Granger, earlier today, met with the visiting President of Chile, Her Excellency Michelle Bachelet, on the sidelines of the Thirty-seventh Regular Meeting of the Conference of the Heads of Government of the Caribbean Community (CARICOM), to discuss matters of mutual interest on the bilateral, regional and international agenda and his impending trip to Chile later this year to concretise the agreements which have been agreed upon.

President Granger, in an invited comment at the conclusion of the meeting, said that Chile has been a longstanding friend of Guyana and the wider Caribbean region and that the two countries are now exploring areas in which Chile and Guyana can cooperate. Of particular interest to Guyana, is Chile’s expertise and experience in maritime administration and their regulatory framework for the mining sector.

“In terms of our own relations, we know that Chile, particularly the President of Chile, Madam Michelle Bachelet, is committed to poverty reduction, is committed to peaceful resolution of conflicts and also she is committed to reducing the adverse effects of climate change. As you know, the CARICOM Region is an extension of the maritime zone and Chile has a long coastline and has much experience so there are many areas of cooperation [to explore]. Chile has one of the most successful mining enterprises in the world. It’s a major copper producer and we are looking at building a stronger regulatory framework in our sector… so there are many areas of functional cooperation as well as economic cooperation and Chile is an ideal partner with the Caribbean in this regard,” President Granger said.

The two Presidents reviewed the existing bilateral relations between Guyana and Chile and agreed to continue working closely to expand and strengthen collaboration not only at the bilateral level, but also at the regional level within the context of the Union of South American States (UNASUR), Community of Latin American and Caribbean States (CELAC), Organisation of American States (OAS) and the Caribbean Community (CARICOM).

In this regard, they agreed to adopt the following decisions: to decide on a mutually convenient date for the visit of His Excellency David Granger to the Republic of Chile in October/November 2016, to finalise negotiations on two bilateral agreements between Guyana and Chile on the occasion of the visit of President Granger to Chile: The Open Skies/Air Services Agreement and the Reciprocal Agreement for the Abolition of Visa Requirements for Holders of Ordinary Passports.

Meanwhile, in a joint communiqué issued by the Ministry of Foreign Affairs and the Chilean representatives, it was noted that President Bachelet highlighted the political importance of the presence of the Embassy of Chile in Guyana as a platform to foster bilateral relations through common and shared positions on matters related to the principle of adherence to International Law and mutual cooperation at the regional and international levels.

President Bachelet emphasised the pivotal role Chile plays in responding to the challenges faced by countries in the Caribbean through the promotion of cooperation and technical assistance. The sharing of best practices and experiences with Guyana and other countries of the Caribbean region in areas of common interest are central to the promotion of economic and inclusive social development.

The two Heads of State have also agreed to maintain strong collaboration with a view of promoting mutual trust and ensuring that the principle of peaceful solutions to controversies continue to prevail in the relations between South American States and to support as far as possible the candidatures of both countries for key regional and international positions.

President Bachelet reiterated the commitment of the Government of Chile to further strengthen ties with all CARICOM member countries. Her engagement during the meeting of Heads of States and Government of CARICOM is a reflection of her country’s interest in the region, the communique said.

The Chilean President was accompanied by the Minister of Foreign Affairs of Chile, His Excellency Heraldo Muñoz Valenzuela and other senior officials of the Government of Chile.