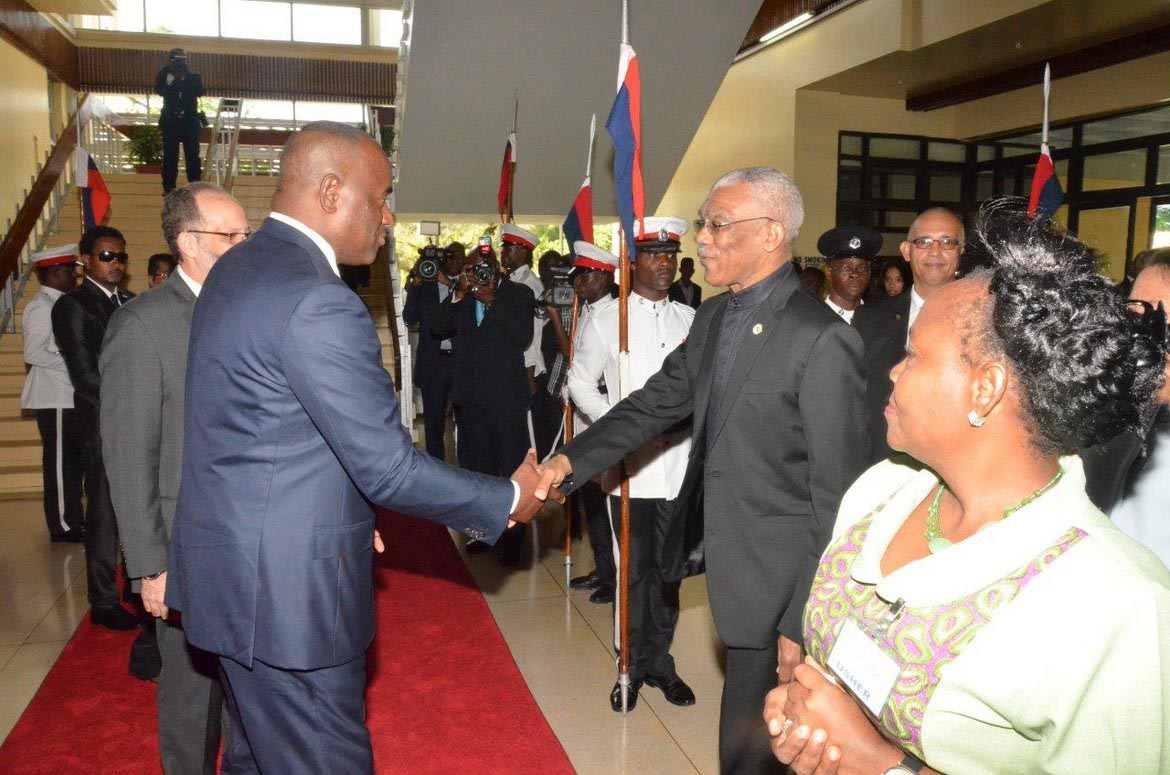 Georgetown, Guyana – (July 5, 2016) CARICOM Heads, yesterday, reaffirmed their commitment to regional integration to making the community work for the benefit of all of the peoples of the Caribbean region. CARICOM Heads of State are currently in Guyana for the 37th Regular Meeting of the Conference of Heads of Government. The conference opened, last evening, at the National Cultural Centre (NCC) and runs until July 6, under the Chairmanship of Prime Minister of Dominica, Rt. Hon. Roosevelt Skerrit.

Prime Minister Skerrit, in his address, said CARICOM is the fulfilment of a long-standing aspiration of the peoples of the Region. He spoke of seven imperatives in order for the community to be successful. These are: a seamless market space connected effective and cost-effective transportation, a vibrant private sector, attractive investment opportunities, a more productive regionally integrated labour market, an efficient regionally integrated capital market, solutions to problems related to energy, and building resource competence and capabilities that make innovation a reality.

The Prime Minister said that as a collective, the community has made significant progress in all seven of these areas but maintained that much more needs to be done. “CARICOM is not about imposing policies and programmes on member States, it is about empowering member States by democratic means. A major responsibility, therefore, falls at the level of member States to get things moving,” he said.

Prime Minister of St. Vincent and the Grenadines, Dr. Ralph Gonsalves, one of the longest serving members of the Conference of Heads of Government said that contrary to the level of pessimism that permeates in the Caribbean regarding CARICOM, tremendous progress has been made in the integration movement, wherein lies significant strength and possibilities for Caribbean people.

“CARICOM is not a federation. It is not a unitary State. CARICOM is not even a confederation. It is a  community of independent, Sovereign States… There are things which we need to do to deepen the integration process, but let us not denounce all of our immense achievements over the last many years,” Prime Minister Gonsalves said.

President David Granger, co-host of the Thirty Seventh Regular Meeting of the Conference of Heads of Government of the Caribbean Community (CARICOM) greets current CARICOM Chairman and Prime Minister of Dominica, the Right Honourable Roosevelt Skerrit upon his arrival at the National Cultural Centre for the Opening ceremony. 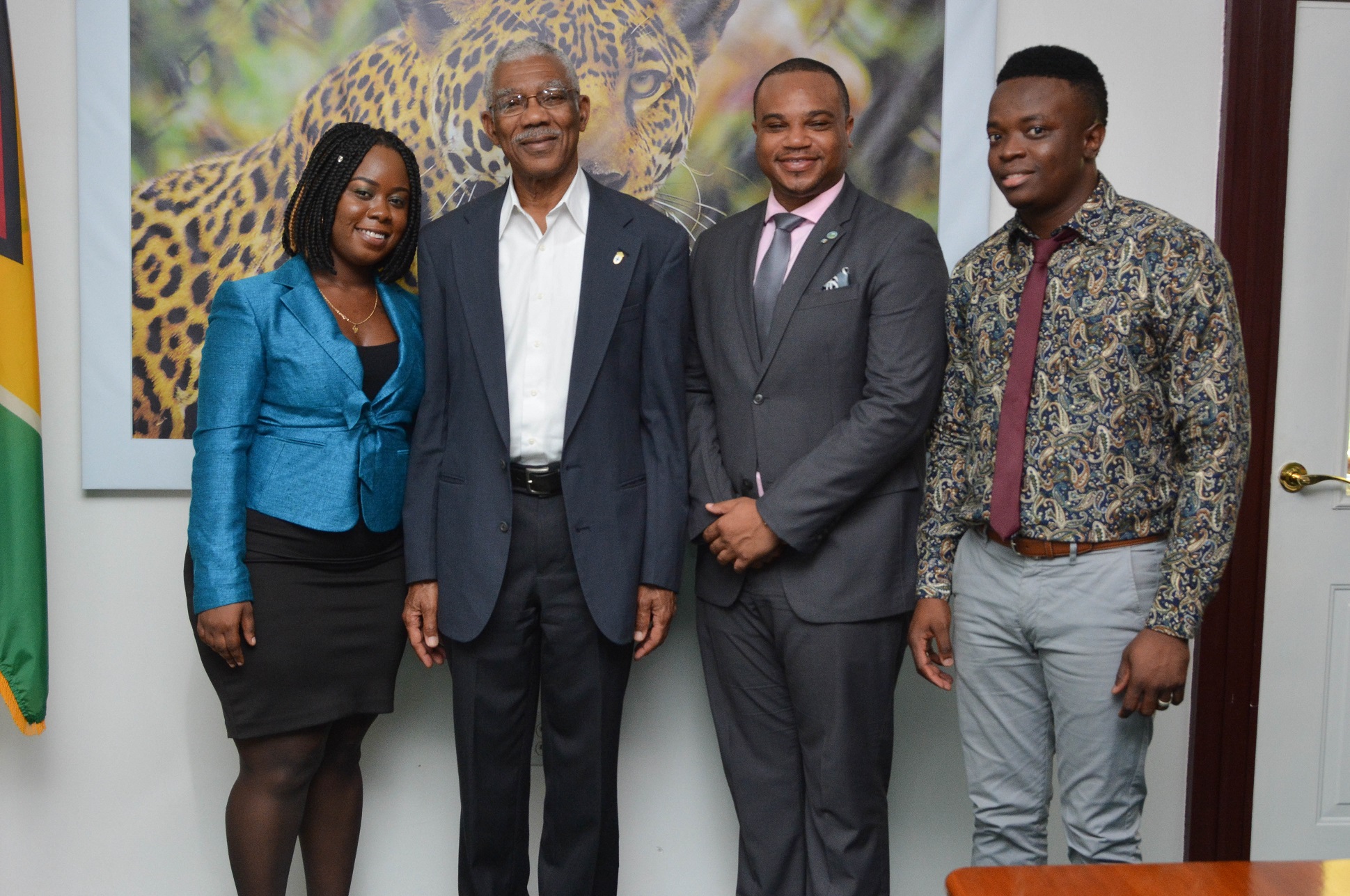 The Fifteen Heads of Government of the Caribbean Community (CARICOM), during this evening’s opening ceremony. Prime Minister of Trinidad and Tobago, the Honourable Dr. Keith Rowley is at the podium to the far left. 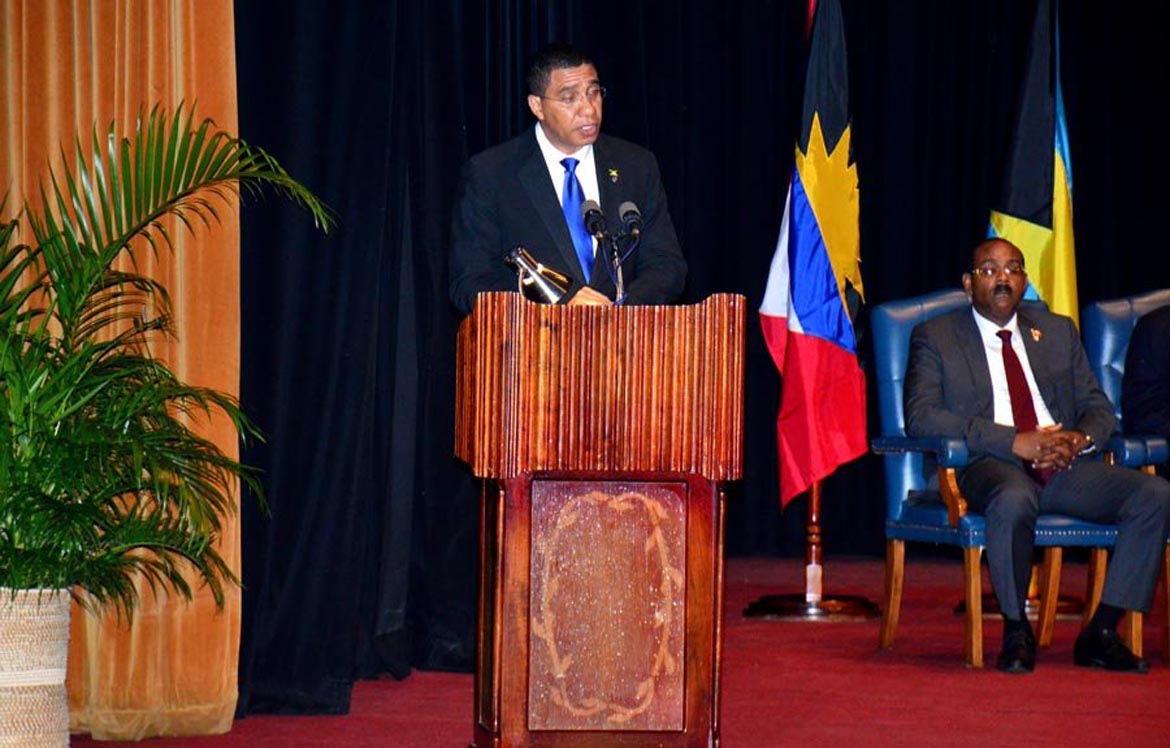 Prime Minister of Jamaica, the Most Honourable Andrew Holness, during his presentation  to the Heads of CARICOM and special invitees who had gathered at the National Cultural Centre for the opening ceremony of the Thirty Seventh Regular Meeting of the Conference of Heads of Government of the Caribbean Community (CARICOM).

These sentiments echo comments by President David Granger, last week, during his weekly programme, the Public Interest where he said that CARICOM is important to Guyana strategically, economically and socially. He said that while there has been some degree of slothfulness in the areas of trade and other economic relations, there has been tremendous progress in terms of functional cooperation.

President Granger said, “CARICOM is useful, Guyana cannot do without CARICOM but we are looking forward to the enhancement of the Single Market and Economy…we would like to move ahead much more quickly, but I don’t think there is any danger that CARICOM will fall apart or that it will cease to fulfil the functions for which it was established 43 years ago.”

While Jamaica has launched a commission to review its relations with the regional body, Prime Minister Andrew Holness, in his address, said that while countries focus individually, on their respective national challenges, it is important to engage and develop regional and international strategies so as to achieve economies of scale and collectively address issues that commonly affects the Region.

“The establishment of CARICOM by the Treaty of Chaguaramas on July 4, 1973, was based on this premise. It was envisaged as the vehicle through which countries could best pursue a united and integrated community, defending common interests while responding to global challenges. Forty-three years later, we can say that much has been accomplished,” The Jamaican Prime Minister said.

He pointed out, that while institutions such as the University of the West Indies (UWI) and the Caribbean Examination Council (CXC) are excellent examples of what regional cooperation can and has achieved, much more needs to be done.  He added that, “even with its challenges, CARICOM remains a well-respected regional bloc in international forums.” 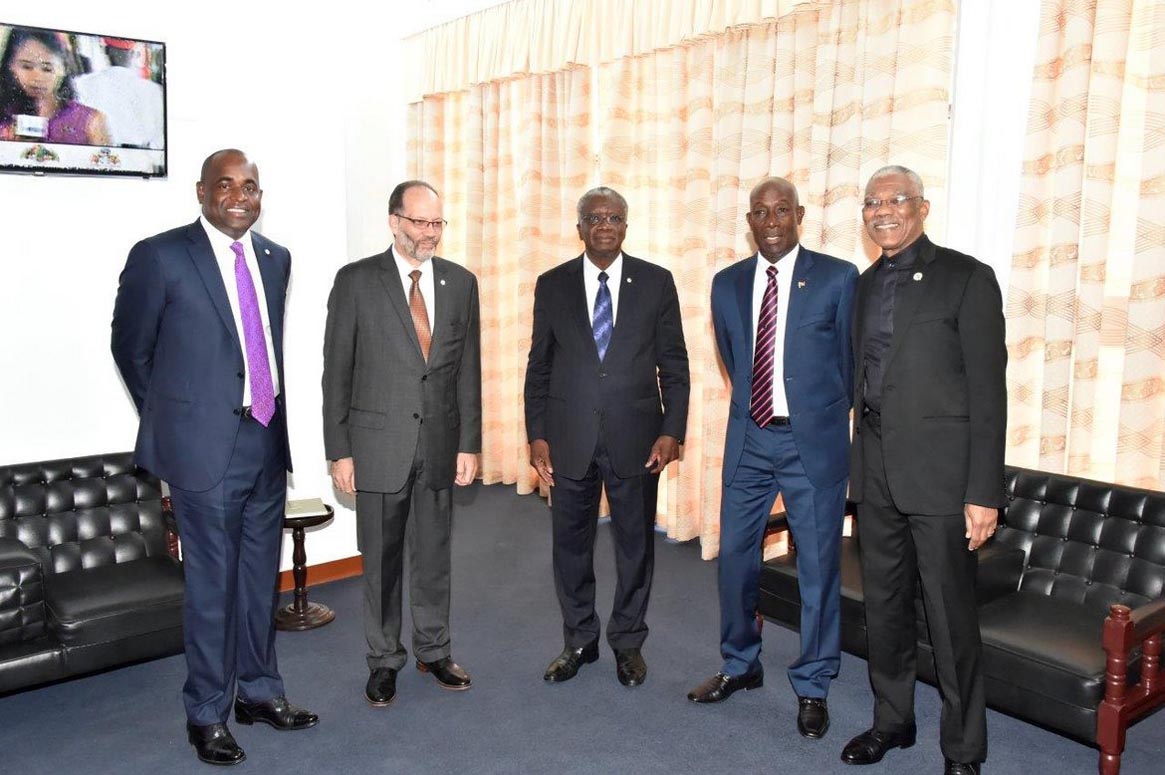 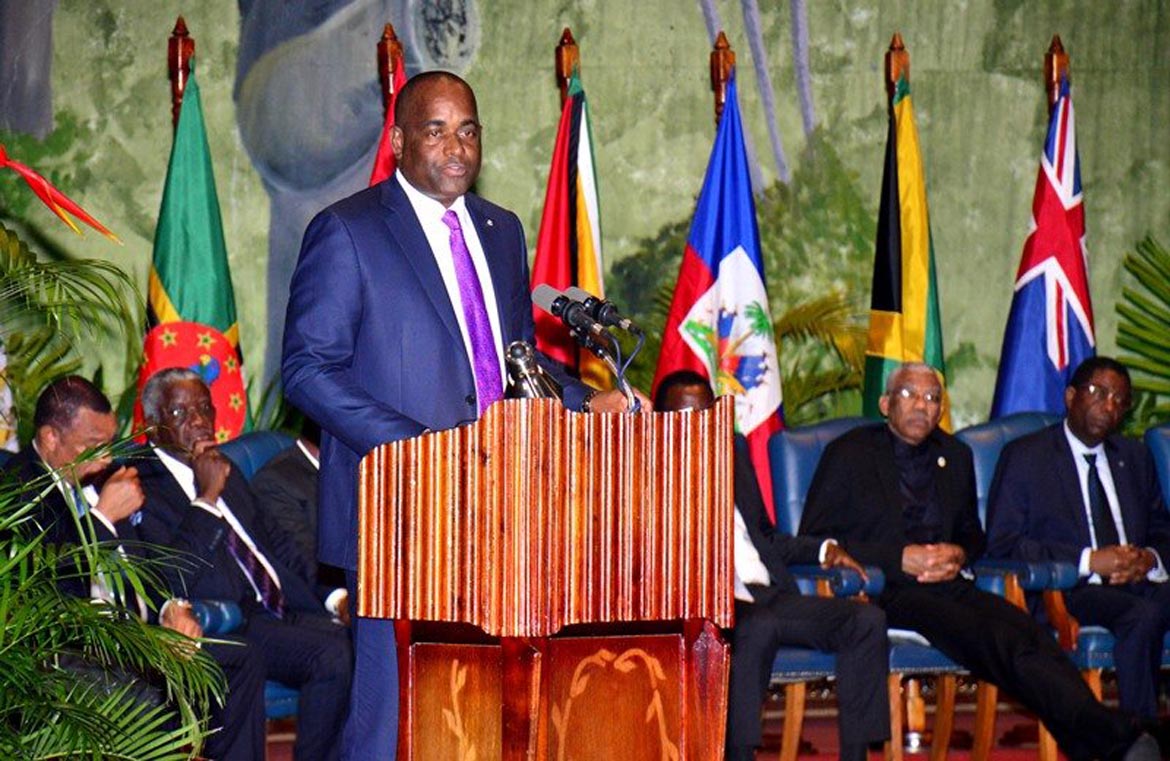 Prime Minister of Trinidad and Tobago, the Honourable Dr. Keith Rowley addressing the Heads of Government and special invitees at the opening ceremony of the Meeting which was held this evening at the National Cultural Centre.

Meanwhile, Suriname’s President, Desirѐ Bouterse called on member States to join hands both nationally and regionally to develop the economies the respective service sectors of CARICOM States, so that the latter can become a solid foreign currency earner, thereby reducing dependency on the traditional sectors, which are all susceptible to the volatility to the world market.

Prime Minister, Keith Rowley of Trinidad and Tobago spoke extensively on the devastating effects of organised crime on the economic and social progress of the Region and made the point that leadership is not about popularity, it is about making tough decisions.

St. Lucia’s Prime Minister, Allen Chastanet emphasised the need for member States to work together as a collective, to find solutions that are cost effective so that the people of the Region can feel the tangible benefits of the Community. 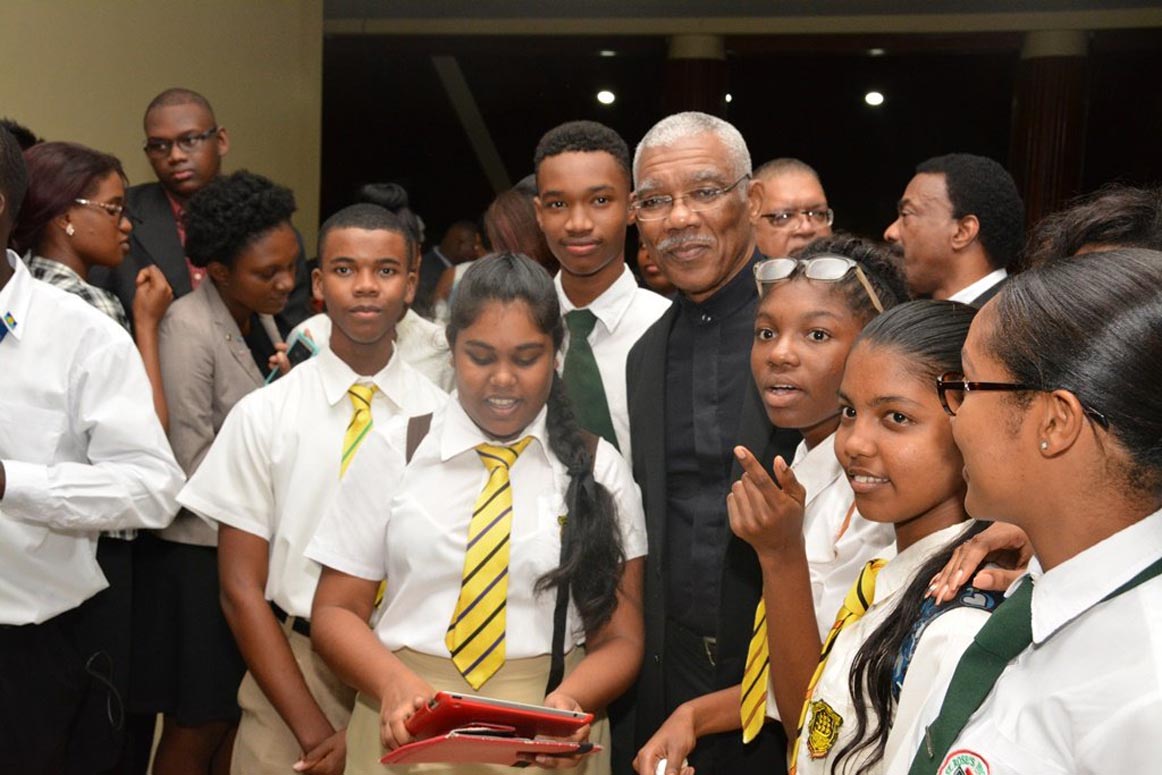 President David Granger grants a photo  opportunity to these students, who attended the Opening Ceremony of the CARICOM Heads of Government Meeting.