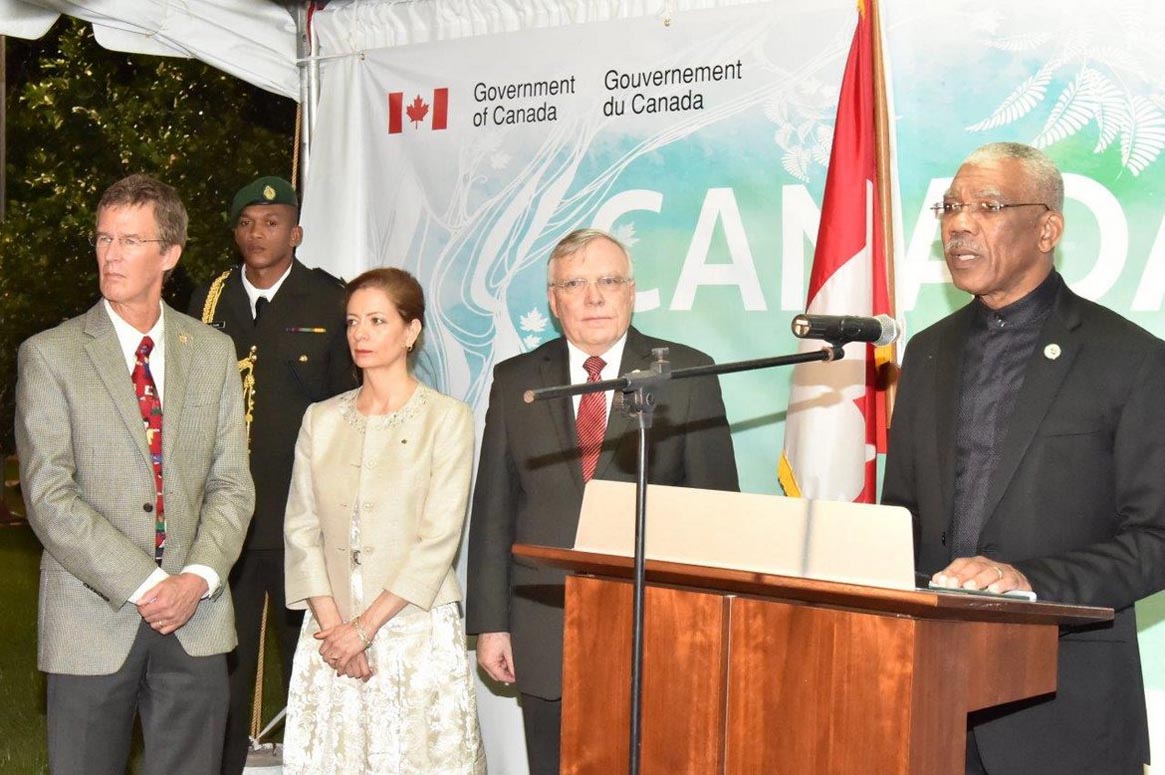 Georgetown, Guyana – (July 2, 2016) President David Granger, last evening, extended Guyana’s gratitude to the Government and people of Canada for the firm support that country has shown in the face of the ongoing Guyana/Venezuela border controversy, even as he committed to ensuring that the bilateral ties between the two countries remain strong.

The President made these comments during his address at a reception held to observe ‘Canada Day’. The Head of State said that Guyana remains appreciative of the position, which has been taken by Canada to support Guyana’s stance on the ongoing border controversy.

“Guyana applauds the consistently principled position that Canada has taken in defence of Guyana’s sovereignty and territorial integrity. Guyana welcomes and appreciates this approach, which is a manifestation of Canada’s interest in ensuring respect for the inviolability of international treaties, particularly here in the Western Hemisphere,” President Granger said.

Canada’s support, the President said, is a testimony of the friendly and strong relations, which exist between the two countries. He noted that ‘Canada Day’ could not have come at a more opportune time as Guyana and Canada are celebrating 50 years of bilateral ties, which he hopes will extend for a long time into the future.

President David Granger addressing the attendees at the ‘Canada Day’ reception, which was held, last evening, at the High Commissioner’s residence.

“It is a happy occasion that this celebration is a coincidence. Not only is Guyana is observing its 50th Anniversary of Independence, but 50 years of diplomatic relations with Canada… Relations between Guyana and Canada have been strengthened through increased technical cooperation, trade and development assistance… Canada has been an important ally of Guyana within the Commonwealth. Guyana looks forward to continued collaboration with Canada in international organisations,” President Granger said.

He noted that Canadian companies are engaged in Guyana’s forestry and mining sectors and have brought considerable expertise and experience in the extractive industries. Further, Canadian markets are more accessible to Guyana’s goods under the preferential CARIBCAN trading arrangement and as such, “Guyana is keen to attract investments from Canada that will attract value to its exhaustible resources”.

The President said too that Guyana is examining actively, the proposal that has been made by Canada, for training and development and the country welcomes the offer of assistance for the setting up of the Sovereign Wealth Fund (SWF).

Meanwhile, Canadian High Commissioner to Guyana, Mr. Pierre Giroux remarked that Canada and Guyana share many common goals and characteristics as well as membership in many international organisations, which speak to the countries’ values and culture. 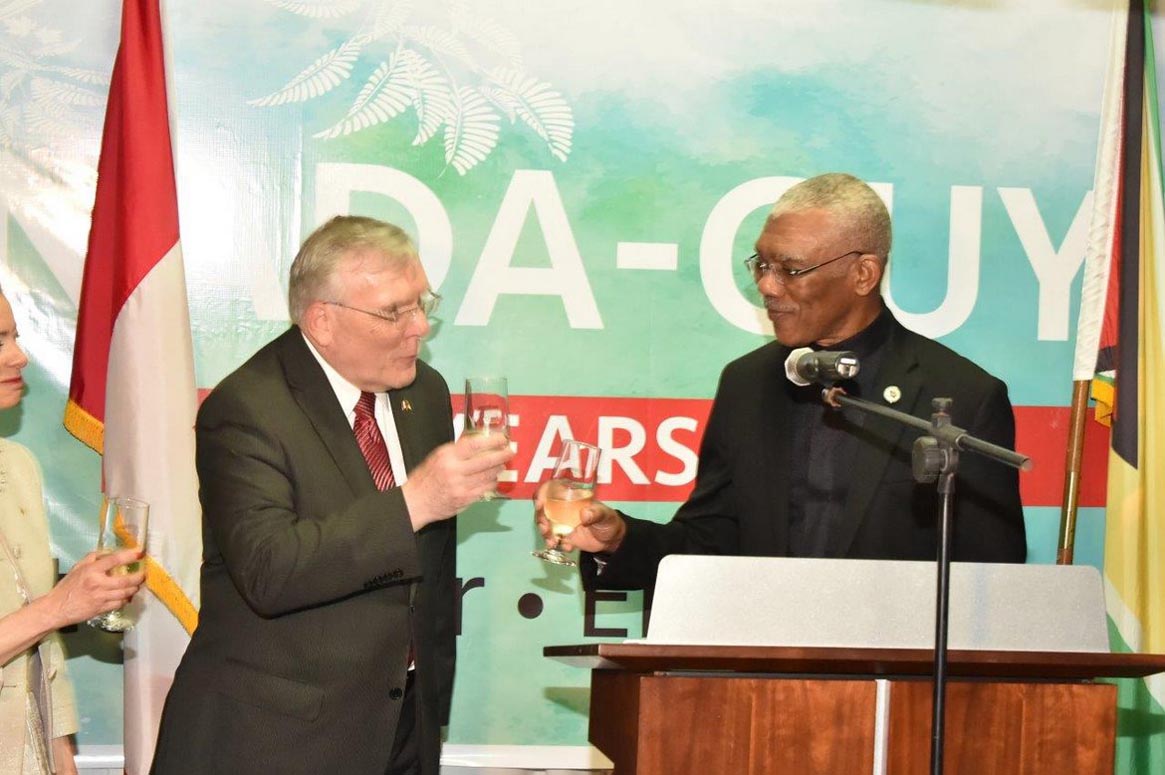 High Commissioner to Guyana, Mr. Pierre Giroux and President David Granger share a toast in celebration of ‘Canada Day’ as well as the 50 years of friendship between the two countries.

“We have a long-standing trade relationship that goes back centuries and Canada is also one of the largest sources of foreign direct investment in Guyana. Canada and Guyana share a vision for a more secure and prosperous region, which is why Canada established the Caribbean Regional Development Programme, which includes initiatives that build stronger leadership in the public service, better public finance management, a stronger and more entrepreneurial private sector, improved rule of law and better disaster risk management. Canada and Guyana also share extensive people-to-people ties, with the Guyanese diaspora in Canada estimated to be around 200,000, linking our cultures and peoples ever closer,” Mr. Giroux said.

The High Commissioner also said that Canada looks forward to growing together with Guyana for the next 50 years and beyond and “together, we will shape the future of our two great countries.”