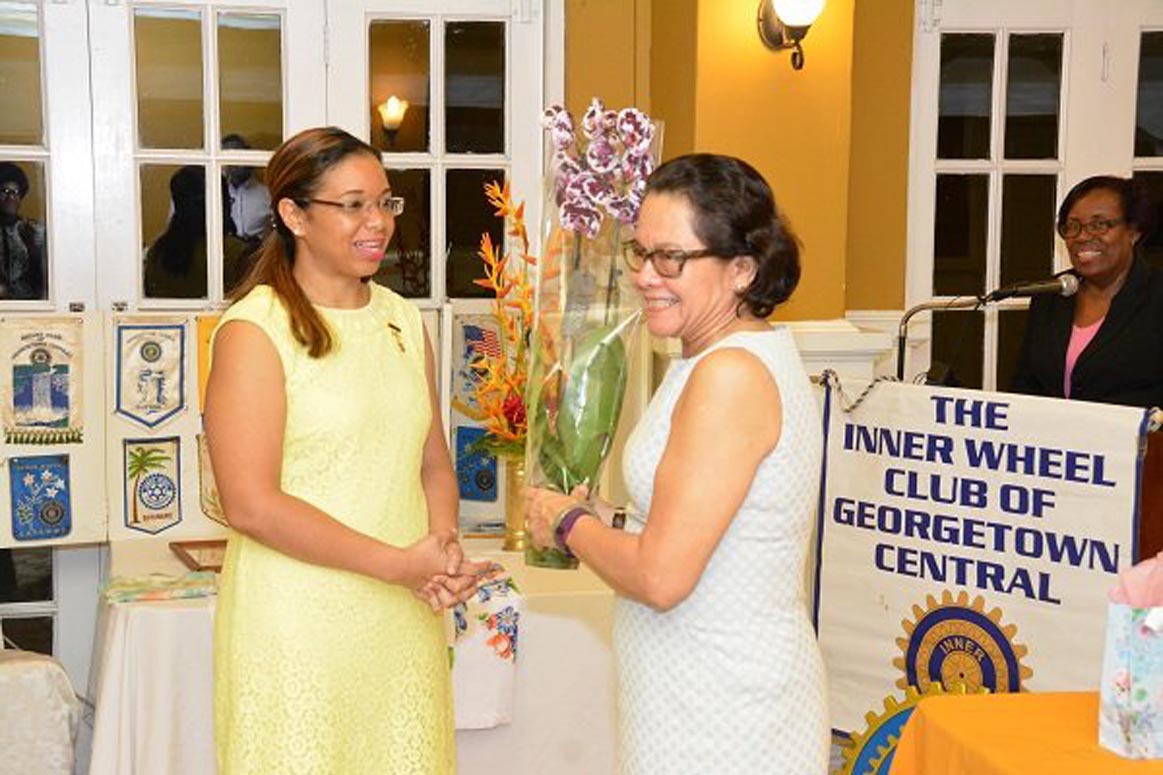 Georgetown, Guyana – (June 30, 2016) First Lady, Mrs. Sandra Granger, yesterday, made a resounding call for more action to be taken to prevent and stem the scourge of domestic violence in the Guyanese society. The First Lady made these comments during her feature address at the 32nd Installation Ceremony of the Inner Wheel Club of Georgetown Central, held at the Georgetown Club.

Mrs. Granger told the audience, which included the Club’s Immediate Past President Ms. Cherri Peters-Grant, Vice President Ms. Cheryl Douglas, other members and special invitees that it was pivotal that women come together to lessen the damage that domestic abuse has had and continues to have on women, children and communities.

“Our voices must be raised in our homes, in our schools, in our offices, in the field and factory, on our playfields, in our churches, masjids and temples, in the media, in our restaurants and bars to demand an end to the scourge of domestic violence,” Mrs. Granger said.

Quoting Coordinator of the Help and Shelter group, Ms. Margaret Kertzious, the First Lady said domestic abuse is perceived to be a common feature in the Guyanese culture. She noted that an urgent change is needed in the national consciousness as these behaviours continue to have an adverse effect on the nation’s children.

First Lady, Mrs. Sandra Granger smiles as immediate Past President of the Inner Wheel Club of Georgetown Central, Ms. Cherri Peters-Grant (first left) presents her with a bouquet of orchids in appreciation for her attendance at the induction ceremony.

Meanwhile, in giving a brief overview of the work programme under her tenure, Ms. Peters-Grant said the Club has raised $1M through fundraising efforts to support a number of community service activities. These include the provision of books and other literary services to its library, which was started in 1985 for the children of West Ruimveldt, the support of its feeding programmes, including a the procurement of an industrial stove and oven for the St. Pius feeding programme and the renovation of the third storey of the Ptolemy Reid Rehabilitation Centre to make it a liveable boys’ dormitory.

Ms. Peters-Grant said she was privileged to have served the Club, noting that she fully embraces the motto of the late boxing legend, Mr. Mohammad Ali who believed that “to serve others is the rent you pay for your time here on earth.”

During the handing over exercise, Ms. Sheron Fraser was inducted Club president for the fiscal year 2016/2017. She was pinned by Past President Ms. Rosamund Choo-Shee-Nam.

The club also presented a cheque to Ms. Marcia Smith, administrator of the Gifted Hands Learning Centre for Children with Special Needs and one to President of the Inner Wheel Club of Georgetown Ms. Dorothy Fraser, who is also the General Secretary of the Guyana Red Cross Society. Mrs. Granger is the first sitting First Lady to have participated in an induction ceremony of the Inner Wheel Club.