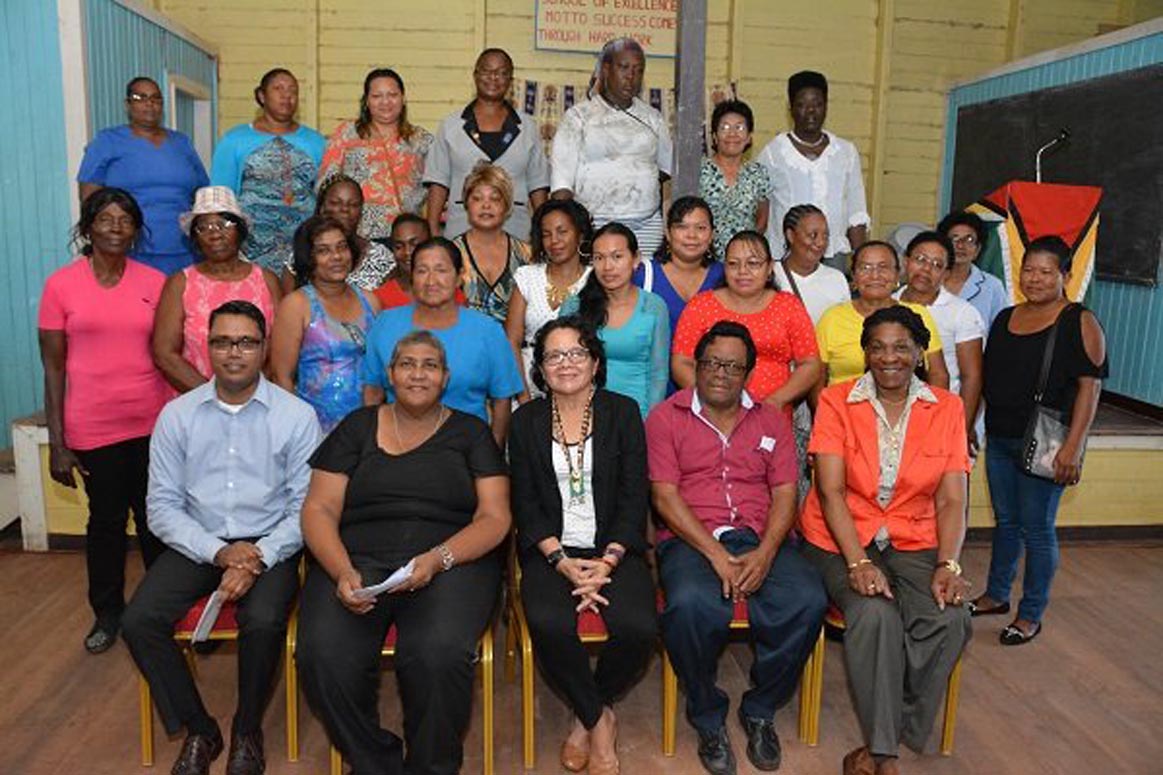 Georgetown, Guyana – (June 28, 2016) First Lady, Mrs. Sandra Granger, yesterday, took her Self Reliance and Success in Business workshop to a group of businesswomen in Mahdia, Potaro-Siparuni (Region Eight), who were eager to capitalise on the opportunity to learn the necessary skills to advance their small businesses.

A large gathering of residents, who hailed from Tumatumari, Micobie, Campbelltown, Princeville, Mahdia Central and other areas warmly greeted the First Lady on her arrival at the opening session, which was held in the auditorium of the School of Excellence. Even as she thanked them for their attendance, the First Lady pointed out that while she does not want the men to feel left out; the workshop was directed predominantly at women.

Mrs. Granger said that the workshops are funded by the Ministries of Social Protection and Indigenous Peoples’ Affairs and plans are in train to continue to take them across the country. She expressed hope that at the end of the workshop both business owners and prospective business owners will have a better idea of how to grow and manage their businesses, understand their community and be better informed about how to package and market their product, all to their long-term benefit.

First Lady, Mrs. Sandra Granger (seated, centre) is flanked by, from left to right Mr. Johann Puran of Interweave Solutions, Ms. Rajcoomarie Bancroft, MP; Regional Chairman, Mr. Bonaventure Fredericks and Lt. Col (ret’d) Ms. Yvonne Smith, of the Office of the First Lady. Participants in the workshop for businesswomen are pictured standing at the back.

“I hope that you, the participants, would be excited and energised once you have completed this programme and [are] able to see benefits in whatever business venture you…engage in,” she said.

Meanwhile, Ms. Rajcoomarie “Gloria” Bancroft, Regional Councillor and Member of Parliament, who coordinated the seminar in this region, said she hoped that having the First Lady explain her vision for the seminar has given the women food for thought.

“I hope the women of Mahdia can really start thinking ahead. Even if you’ve never had a business, as the First Lady said, start thinking about something to make yourself independent and not dependent,” she said. Ms. Bancroft reiterated that they should “throw off dependency” and encouraged them “to teach the youths because … the young people have to take the mantle” of leadership in coming years. 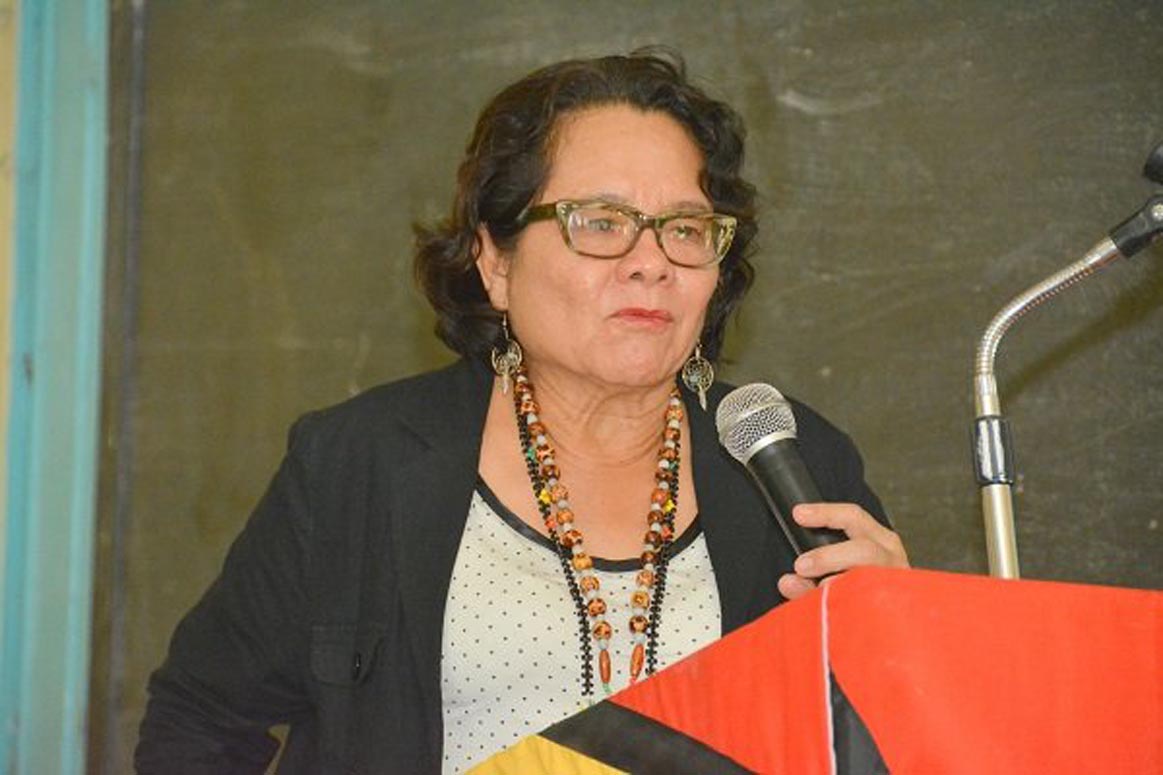 ‘The focus of the exercise is to help women to understand and value their skills,’ First Lady, Mrs. Sandra Granger says at the opening session of the Self Reliance and Success in Business Workshop

Twenty-five women and one man, who asked to be included, are participating in the session this week at the boardroom of the Regional Democratic Council. The participants include St. Lucian born Ms. Theresa Johnson, who has lived in Mahdia since the 1960s, and they own a variety of businesses, including groceries, clothing retail shops, restaurants and beverage shops.

Representatives from Interweave Solutions, Mr. Johann Puran and Ms. Crystal Baptiste said that the focus of the workshop is two-fold in that it teaches business management skills but it also encourages the women to develop community plans, which focus on the creation of groups that would discuss and resolve issues within their community.

Businesswoman, Ms. Mathilda Leon boldly shared her work plan with the group and came in for high praise from the facilitators. “I’m very happy to be here. I’m a businesswoman but I never had the opportunity to be in this sort of session to learn more [about] how to manage my business. It is my pleasure to be here,” she said. 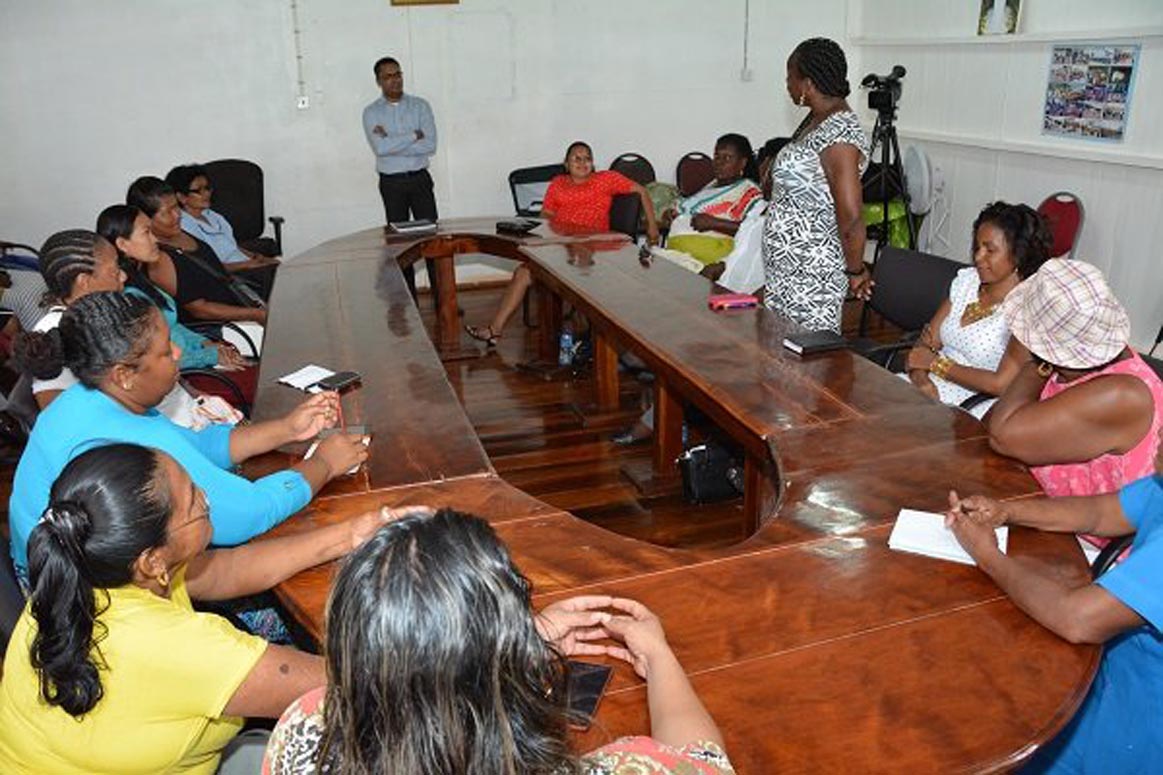 Mathilda Leon stands to make her point, during the working session of the Self Reliance and Success in Business Workshop at the Regional Democratic Council office. Mr. Johann Puran of Interweave Solutions is also pictured standing.

The First Lady expressed appreciation to Ms. Bancroft for organising the event, Regional Chairman of Potaro-Siparuni, Mr. Bonaventure Fredericks, the councillors and people of the region. She also thanked Interweave Solutions, a non-governmental organisation that helps local entities in developing countries to expand their business sectors through training, for approaching her office with this new and innovative approach to help small businesswomen to amplify their economic prospects.

The workshops have their genesis in a vision of the First Lady, whose work has, over the past year, centred on women’s empowerment with a view to making an impact on families, communities and the country at large. Over the last few months, workshops have been held in Lusignan, Demerara-Mahaica Region; Linden, Upper Demerara-Berbice Region; the Upper Takutu- Upper Essequibo; Mahaica – Berbice, Barima-Waini regions and, most recently at Bartica, Cuyuni-Mazaruni.